Press Waffle Co., a new restaurant in SoMa in the commercial building at 1424 Main St., directly across the street from Boulevard, opened the first weekend of September to long lines and eventually sold out of dough.

“It was a complete mad house,” co-owner Rosemary Compton said. “There’s no way we could’ve predicted it, which is a great problem to have. Little Rock showed us so much love and support.”

The store has a coffee shop feel. You stand in line to order and are given a pager that buzzes when your order’s ready. There are a couple couches facing each other near the entrance. A small patio out front faces South Main. Stools with a bar area flank some of the Main Street-facing windows as do a few two-tops. Booths line the wall on the restaurant’s south side.

Compton co-owns the restaurant with her mother Mary Busby. Compton’s cousins and Busby’s nephews Bryan Lewis and brother Caleb started Press Waffle Co. out of a food truck in Dallas in 2016. Since then they’ve appeared on ABC’s “Shark Tank,” and opened additional Press Waffle Co. stores in food halls in  Texas and Oklahoma. The restaurant specializes in customizable authentic Belgian Liège waffles made from dough as opposed to batter. The specialty waffles include sweet and savory varieties. “The House” waffle is topped with fresh cut strawberries, cookie butter, Nutella and house-made whipped cream. 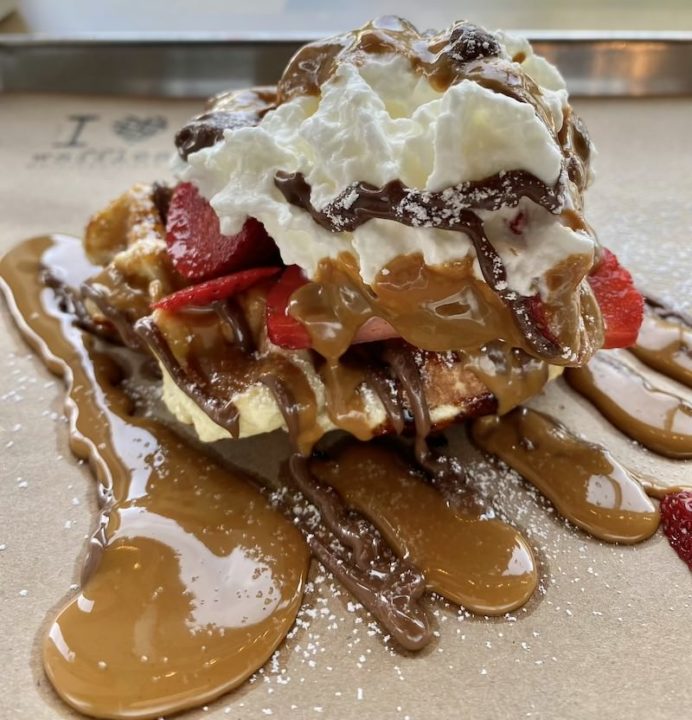 Armed with a plastic knife and fork, I easily cut through the waffle and found the blend of Nutella, house-made whipped cream, cookie butter and strawberries delightful. The dough itself isn’t tough but not as quite as fluffy as batter-made Belgian waffles. The flavor was great. Compton told me in an interview last year that it contains caramelized clusters of Belgian pearl sugar. Truth be told, I wanted to eat the whole thing, but I also ordered “The Cristo” from the savory side of the menu with smoked turkey, ham, white American cheese and blackberry jam. Monte Cristo sandwiches are typically made with French toast, and I’ve been curious about waffle sandwiches since adolescence when I ordered a waffle breakfast sandwich from Waffle House assuming I was going to get a breakfast sandwich served on a waffle but was disappointed because it was just a regular breakfast sandwich with white bread stamped in a waffle press. 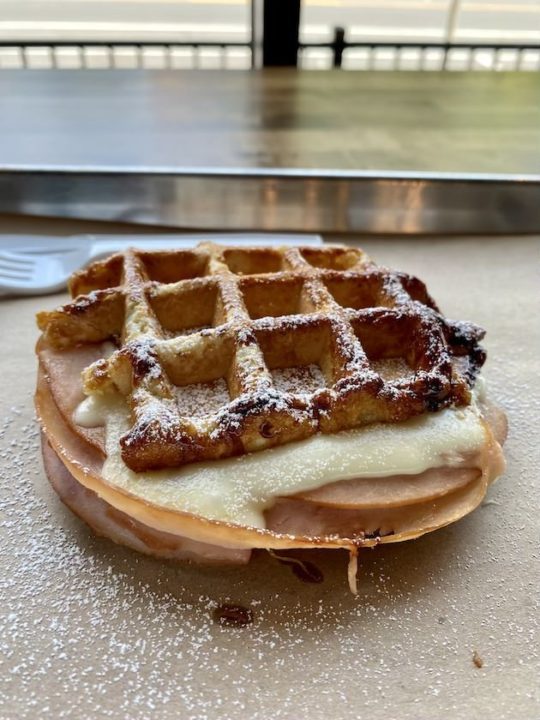 The sweet and savory elements of Press Waffle Co.’s Cristo made for a nice flavor profile. A little sweetness from the waffle and the jam paired well the smoky ham and turkey flavors. My first ever waffle sandwich was a good experience. I ate half of both and didn’t feel too terrible about myself afterward.

Also on the sweet side of the menu: “The Happy Camper” with toasted marshmallows, cookie butter and chocolate syrup; “The Southern Belle” with tangy lemon curd, fresh blueberries and whipped cream; “The Elvis” with peanut butter, banana, bacon crumble and honey and “Cereal Waffles” with a choice of Cocoa Puffs, Fruity Pebbles or Cinnamon Toast.

More from the savory side: “The American” with fried egg, cheddar, bacon crumble and maple syrup, and “Chicken & Waffles” with two chicken tenders, maple syrup and bacon crumble.

Press Waffle Co. also has a full espresso bar with coffee from North Little Rock’s Trailblazer Roasting Company coffee. It has mimosas and micheladas along with several beers and wines on tap.

Loblolly Creamery ice cream is also available as a topping or a substitute for whipped cream.

The pandemic delayed the restaurant’s opening for about a year, Compton said. And while the experience of long weekend lines has been a bit overwhelming at times, Compton said she and her crew have a learned a lot from the experience. “We’ve implemented a kitchen display screen and we’re not really the type of environment for a hostess, but we’re looking into what we can do to minimize the line.” That includes online ordering and delivery through DoorDash, which Compton hopes will be ready by the beginning of October.