When my friend and I arrived for our reservation at Red Oak Steakhouse, Saracen Casino’s high-end restaurant tucked away at the back end of the 80,000-square-foot gaming space, we had a plan. Eat a $150 steak and then hit the casino floor and win copious amounts of cash, making our tab at the restaurant something we’d laugh at before tearing up the receipt, giggling maniacally and tipping $100 chips for our complimentary cocktails. I was working on a story about Arkansas casino gambling and I didn’t want to report about losing. It’s nice to have a plan, which was pretty much exactly what Saracen’s food and beverage director Todd Gold told me he and his culinary team at Saracen were trying to achieve before opening for business in October of 2020: destination dining to go along with the gambling.

Red Oak’s kitchen is visible from the last row of slot machines on the casino floor, the chefs’ neon reflections shimmering among chefs cooking over high flames. There’s also a glass dry-aged beef case observable from the floor.

The restaurant has a nice vibe. It’s dark and relatively quiet, despite the open kitchen offering diners views into the space where the steaks are prepared. Our waiter who previously worked at the Capital Hotel recognized my friend as a patron. The bartender was a familiar face from the Capital as well.

The complimentary bread served with soft butter was excellent. Warm, soft and seasoned with what tasted like Italian spices, I wanted to avoid it entirely but I couldn’t. “Man, this bread is excellent,” my friend said.

We decided on the Arkansas Root Beer Glazed Pork Belly appetizer. When my friend ordered it, our waiter nodded his head forward, but didn’t say anything, making both of us question ourselves.

“Should we get something else?” my friend asked. The waiter said that our order was a good one, but that we shouldn’t leave without trying the fried oysters.

We ordered both. I figured, why not? After all, we were about to take the house down. Full disclosure: I was planning on expensing this meal, but I was nervous about it. I’ve never expensed a meal at work for over 80 bucks.

The pork belly’s house-made root beer/barbecue glaze wasn’t too heavy or sweet. It was a nice compliment to the tender pork belly, which I felt good about ordering after all. It was served with an arugula salad and some outrageously soft spoon bread that practically dissolves in your mouth, made with sweet corn from Esau Farms in Dumas. So good. 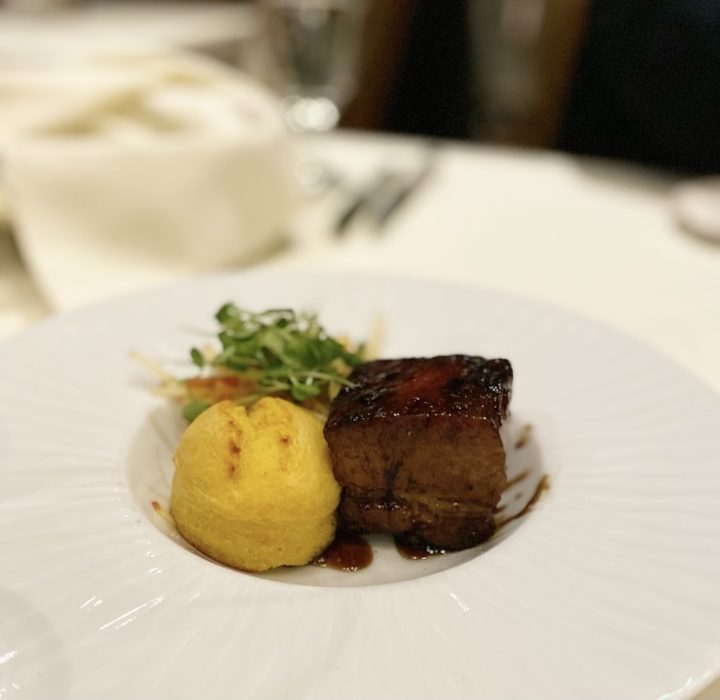 The fried oysters app our waiter recommended might’ve be worth the trip alone — a layer of delicious pork belly-smoked grits topped with creamed spinach and the delicately fried oyster, covered with a flavorful pickled-corn tartar sauce that I would happily eat out of a jar with a spoon. It’s the best dish I’ve eaten this year. As our meal continued we noticed so many of those apps going out. I can’t believe we almost missed it. 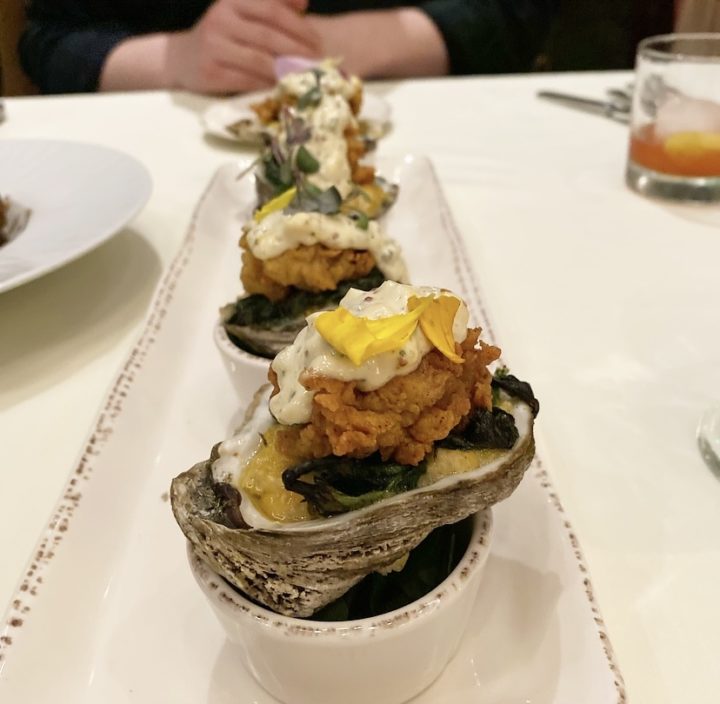 Despite my confidence that we were going to win big after dinner, my voice cracked like a teenager asking someone to prom when I ordered the A5 Kobe strip steak ($150). Red Oak is one of the few restaurants in America offering certified Kobe beef, an elusive breed of pure-blood Tajima Wagyu cattle born, raised, slaughtered and processed in Japan’s Hyogo Prefecture. What makes the steak special is its marbling, which Saracen’s food and beverage director Todd Gold attributes to genetics. “With Kobe, there are no big chunks of fat like on traditional steaks. Rather, the fat is evenly dispersed throughout the muscle in a type of spider web of ultra-thin veins,” Gold said. Carlton Saffa, Saracen’s chief marketing officer, told me Saracen sought the certification to reinforce its commitment to raising the bar in Arkansas, making Saracen as much of a food destination as it is for gaming.

The 8-ounce Kobe strip arrived on a wooden cutting board with three crisped rice rounds resembling scallops and topped with microgreens. Each rice round has a dollop of a sweet and tangy orange sauce beside it, almost resembling cherry tomatoes. 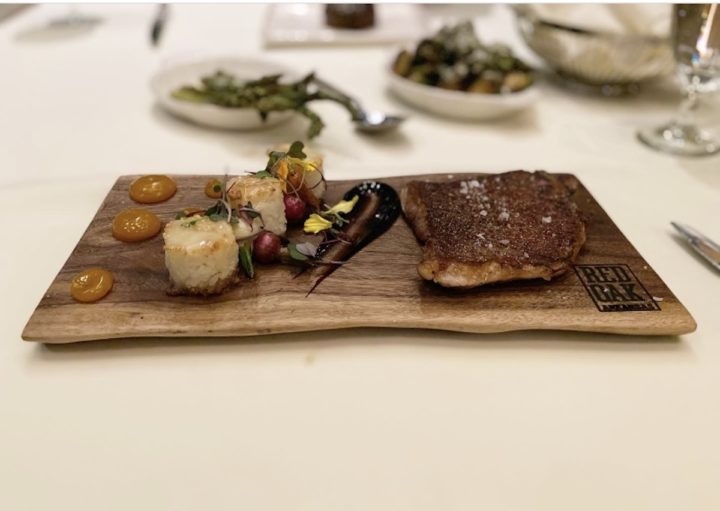 Cutting through the Kobe strip proved to be effortless; a dull butter knife would probably work just fine. As far as steak goes, I’ve never had one more tender. A “wow” is certainly in order. It’s also thinner than my friend and I both imagined, nicely seared, but could’ve done with one less pinch of salt. It’s unlike any steak I’ve ever eaten and, to drive the point home, it came with a letter of authenticity. Our waiter dropped off a complimentary side of Brussels sprouts, which were fantastic and enough to feed a family of four ($9 value). 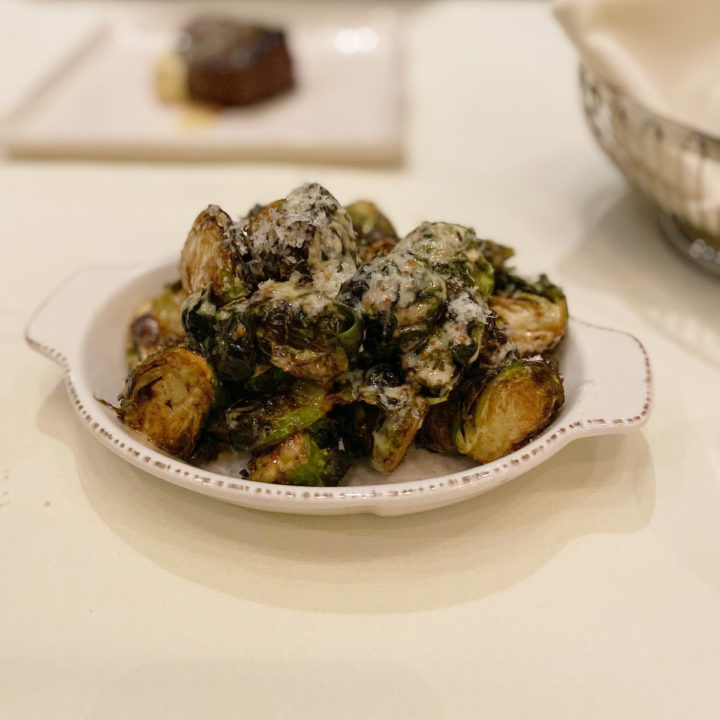 If we’d been blindfolded and taken to Red Oak Steakhouse, I’d be shocked to exit the restaurant and find myself in the back of a casino in Pine Bluff. It could definitely exist among the elite restaurants in Little Rock or Northwest Arkansas. I’d go back for the fried oysters alone, which I need to do soon because I have to win back the money I lost at the craps table that night.