Chef Alicia Watson of Little Rock, owner of the plant-based culinary wellness food delivery and catering business Vito & Vera, made her reality television debut this year, winning the new Food Network chef competition series “Big Restaurant Bet.” Hosted by celebrity chef and restaurateur Geoffrey Zakarian, the competition pitted eight chefs looking to open their first restaurant against each other. Watson won the competition cooking plant-based (when challenges allowed) food while pitching the concept for a plant-based deli version of Vito & Vera. The prize: $250k in Zakarian Hospitality resources. What does that mean exactly? We caught up with Watson, who’s back in Little Rock serving plant-based meals from Arkansas farms to people’s front doors.

I liked that the show wasn’t just about the cooking, it was also about the business and what goes into opening a restaurant.

My biggest takeaway is an Iron Chef sitting down in my concept and saying he’s never been in a plant-based restaurant. … I thought, “Really?” I hope Food Network looks at that. They need to do something on their channel about plant-based. It’s just a big missed opportunity. 73% of Americans have tried plant-based food in some form or fashion. So if I’m a restaurateur, even if I’m Joe Blow at a steakhouse, I’m thinking to myself, “What am I going to do that fits my concept that’s plant-based?”

Before you enrolled in culinary school three years ago you were an occupational therapist in home health. What did you experience in your former career that inspired you to become a plant-based chef?

100% everything came from my patients. Because I worked with a disadvantaged community, I saw their comorbidities go up, even though they went to doctors appointments [and] took medications. I knew by looking at the medical journals that food was starting to be medicine, and people were fighting prostate cancer, making changes in diabetes just by diet. That’s when I realized that I wanted to be a plant-based chef.

You trained at the University of Arkansas Pulaski Tech Culinary Arts and Hospitality Management Institute. What was that experience like as a chef aspiring to work with plants and not animal protein?

Of course they didn’t teach me anything plant-based because I went in Little Rock. They just thought I was crazy. After I graduated that’s when I really had to start learning and starting to figure out how to transform vegetables into flavor profiles that people like. 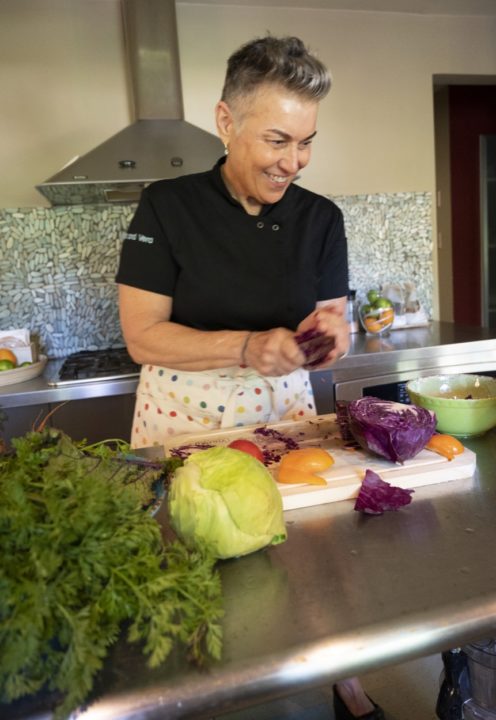 I actually teach the only plant-based course at the culinary school: healthy foods and nutrition. I teach the chef component of that, or I did previous to this semester. I don’t know what will happen next semester.

Do you think in the future there will be more plant-based curriculum at culinary schools?

I would like to think that will be the wave of the future. That’s what I always say is that people who do plant-based or who work in the medical field educating doctors or med students are paid more. Me, as a plant-based chef, when I walk in with who am and my occupational therapy degree, I promise you I’m not at a chef wage because I bring more to the table. I can walk into your house and you can say, “I can’t eat this, I can’t eat this,” and I can go, “Yeah, no problem.” I’m always telling the students there’s a way to make money.

In a confessional moment during the first episode you said, “I’ve always been looked upon as a chef that’s not really a chef because she doesn’t cook meats and and she only cooks plants, especially in Little Rock, Arkansas.” How much of that sentiment comes from your peers in the industry?

That comes 100% from peers. … If the culinary school valued plant-based chefs, they’d have a curriculum. I think this show allowed me to have self-confidence in myself. I was beat down. But I came home a better chef and a more self-confident chef in my values and who my company is and who I am. I have a place, where I didn’t ever think I had that before. 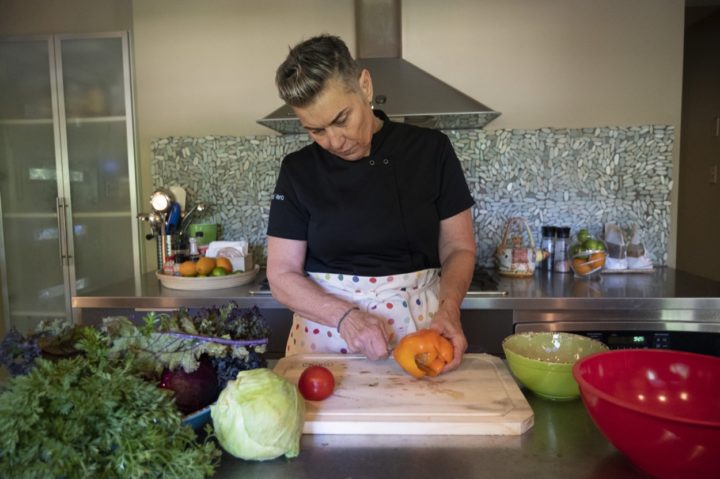 Do you have a location in mind for the vision you offered on the show, the new Vito & Vera plant based deli?

There’s a lot on the table right now. We’re not making statements about where we’re going. We’re very much in the grind of securing funding, looking at locations, looking for investors, really trying to nail down and button down the financials of my business. The prize is $250k in [consulting] services tied to Zakarian Hospitality. So what that means is that there’s no funding, there’s no money coming forward. And the reason why I’m making this a point is because I want investors to know what’s on the table. Yes, we have a concept, yes we’re backed by Zakarian Hospitality, but I’m not sitting on $250k. We’re open to put our place somewhere that will be well received because we deserve a place.

One of the main criticisms of your concept on the show is the food cost of fresh produce. Do you agree with that criticism?

It’s ridiculous. Something else about Vito & Vera, we use the whole ingredient. When I use a squash, I leave the seeds in it because the seeds are protein. Anything that’s left over goes into my veg stock. We focus on zero waste in the back and zero waste in the front of the house. All of our containers are sustainable. Right now with our meals to-go, we source everything local. So our orders go in on Thursday, we reach out to the farmers, we see what they have going on, we pick up our stuff on Friday, we cook on Saturday and it’s brought to your house on Sunday. So literally our company has a four day turnaround, ground to table.

According to data from Zippia 74.8% of chefs in the US are males. Going into the penultimate episode of Big Restaurant Bet, the three remaining finalists were all female. Although the three of you were competing, how special was that moment?

I want to say that the statistic is that like 19% of the kitchens of the United States are run by women. And when we’re coming out of the Mario Batali, the sexual abuse shit, … It really makes me want to be a stronger chef and when I have female students at school I’m on them because I want you to be better. I want you to be strong. I don’t want you to ask guys to reach up and get the olive oil. If you can’t get the olive oil, you figure out a way to get the olive oil. But it was super good to have three girls, it was really good for a girl to win. That lets little girls watch and go “OK.”

What do you think is the biggest misconception about plant-based cooking or what would you say to someone who says, “I want to do that, but it’s too hard.”

That people feel there’s only one way to do it. I think that at the end of the day you should assess: did you eat enough plants or not? And the next day you wake up and you do better. It’s not all or nothing. And that’s how we need to tell people that everybody can be plant-based. It’s just about making teeny tiny changes and finding something that works for you. I want people to have hope that they can do it.

Something you always have in your fridge?

What would you feed to a diehard meat lover?