For nearly half a century, three generations of the Hall family have been operating a business on Wright Avenue in Little Rock’s Paul Laurence Dunbar School Neighborhood Historic District.

In 1973, the late Knoxie Hall rented the former gas station at 1900 Wright Ave. to sell produce grown on the family farm in Wrightsville, 15 miles away. It’s been a family business from the jump. Hall’s youngest son, David Hall Sr., the store’s current owner and operator, can recall working at the produce stand with his father when he was in junior high school.

“I was here with him from the very beginning,” he said.

Back then the former gas station was not enclosed, and the produce tables were set up out front. When school was out for summer, Hall Sr. worked with his dad every day.

“Didn’t sell much, just sold a little bit, and what we didn’t sell in the evening, we’d load on the truck and take home,” Hall Sr. said.

Knoxie Hall ended up buying the former gas station, renovating it and moving the operation indoors. His wife, Estelle Hall, worked as the manager.

Hall Sr. eventually took over the operations. “I don’t remember what year it was,” he said. “Probably about 20 years ago.” 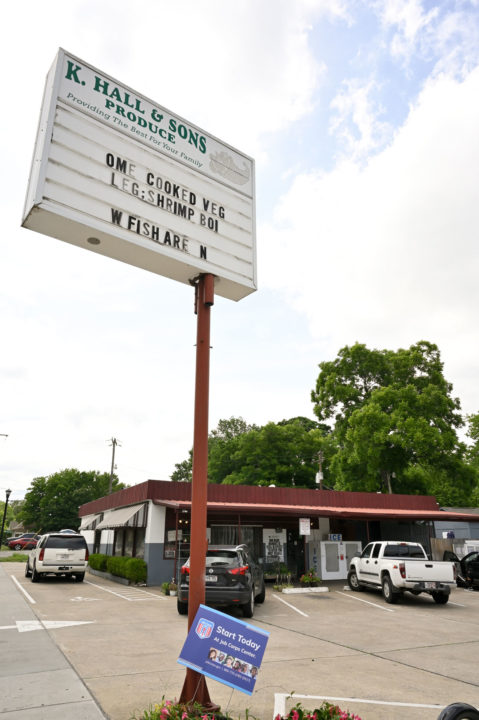 Much like Hall Sr. himself, his three sons, David Jr., Daron and Devin, grew up in the business.

“We grew up working there, probably 5, 6 years old, stocking shelves, taking old ladies’ bags to cars, sacking greens, even working on the farm some, picking watermelons and squash, okra and peas and all that good stuff,” Daron Hall said.

Working there is a family tradition, instilling a strong work ethic and sense of community.

“That was one of the things with my boys and all the siblings’ kids, nieces and nephews, it wasn’t an option, it was a matter of when do you start,” Hall Sr. said. “My boys, they laugh about it now, but it was like, every morning, getting up and turning on the light in their room, you know, ‘Get up, get up, get up, time to go.’ Quite naturally like most kids, like myself, didn’t want to but had to.”

“Definitely instilled in us some hard-working effort and dedication for sure,” Daron Hall said.

Hall Sr. has grandchildren working shifts now. Many of the customers are also close, and greet each other warmly. If Hall Sr.’s sister Katherine Hall is working, you’ll likely hear her greet someone with her signature “Hey, baby.”

When Hall Sr. took over operations, he kept the family and community focus but made two major changes. First, he started delivering produce to restaurants and schools. Then he started cooking.

“We didn’t start cooking to sell,” Hall Sr. said. “We started out cooking to feed ourselves.”

But when customers in the store caught a whiff of what was going on, they wanted to buy more than just produce and groceries, and they let it be known. Their instincts were correct.

If you live in Central Arkansas and haven’t been by K. Hall & Sons to pick up lunch, you’re missing out on something special. You’re not going to find a better value in town, and the food is top-notch. K. Hall’s cheeseburger wowed me more than any burger has in years.

It’s one of those burgers you bite into and immediately say, “Oh, my God.” It’s an unpretentious classic, my favorite kind. And it’s neat and tidy, not so big that you have to cut it down the middle for a successful first bite, although they offer a “jumbo” size and that one is definitely a two-hander. The fries are great, too, and with a 12-ounce soda, the whole meal was less than $8. Another item you should try for lunch is the pork chop sandwich ($3.29), fried golden and crispy and served between two slices of white bread with mayo, mustard, lettuce, tomato and onion. A new item we recently enjoyed is the Sweet Stella chicken sandwich ($3.99), which is a fried chicken sandwich with mayo, pickles and the Hall brothers’ signature Sweet Stella sauce, which won best wing sauce at the 2018 Arkansas Wing Festival.

For dessert, grab some peach cobbler or choose between a wide variety of cakes, available both whole and by the slice.

You can also pick up meals to serve at home later. Refrigerators are stocked with prepared items such as Hall’s “Big Dave’s Homemade Chili,” chicken salad, greens and purple hull peas. The award-winning Sweet Stella sauce is also for sale. Named after their grandmother Estelle — “Stella Mae is what we used to call her,” Daron said — the sauce was created when brother Devin Hall was messing around with some flavors in the kitchen at their parents’ house.

In 2018 the brothers launched the food truck HallBros2Go. The idea percolated for a while, but they didn’t pounce until their father’s friend put a food truck up for sale that was fully equipped and had only been used for one year.

The truck can be found in the front parking lot at K. Hall & Sons for a twice-monthly event known as Soul Food Sunday, a must-stop for all comfort food seekers.

Although soul food wasn’t the original focus, the first time the brothers decided to try out a soul food-focused Sunday, the community took note.

“We sold out the first day,” Daron Hall said. “Didn’t have a crumb of anything left.” So the brothers realized what they had to do.

“Not really surprised,” Daron said, “it just became clear what people wanted to eat on Sundays.”

The brothers started cooking more food to keep up with the demand.

“Nothing makes me happier than Hall brothers Soul Food Sunday,” Peck said. “You’ll most likely see me there every single time. People laugh that I buy so much food for a family of two, but we feast all day Sunday, lunch and dinner, on the best soul food in town.”

The menu varies some, but you’re likely to find country fried wings (try them with Sweet Stella sauce), catfish, pork chops, pork roast, spaghetti with beef and sides such as mac and cheese, greens, candied yams, purple hull peas and cabbage. Desserts from K. Hall are also on the menu. One plate featuring a meat and two veggies is around $12, and is enough for two meals.

Hall Sr. said he and his wife are proud that their sons want to continue the family tradition of cooking.

The Hall brothers also serve food at private events. What’s the wildest event they ever catered?

“Then they try it and they say, ‘Man, that’s so good.’ My dad cooks it and it tastes like barbecue brisket.”

Years before Soul Food Sunday began, K. Hall established itself as a Little Rock seafood destination with its weekly Seafood Saturday boils, which began with seasonal crawfish. Hall said that on one of the last Saturdays of a season, he had some shrimp a friend brought from Louisiana.

Once again, the community spoke. 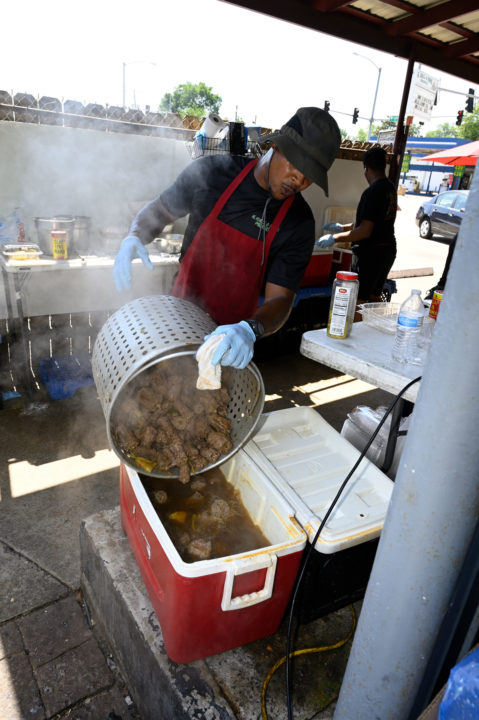 Seafood Saturday is known for its long lines, which typically stretched around the building before COVID times. In line you might see Little Rock Mayor Frank Scott Jr., who recently posted a picture of his Seafood Saturday spread to his Instagram page with the hashtag #EatBigLR.

“I love their Seafood Saturday,” Scott said. “K. Hall and Sons is a significant staple in the city of Little Rock and I daresay Arkansas. Mr. David Hall is someone who’s been a family friend for quite some time and is a stellar leader. We’re grateful to their commitment to entrepreneurship and the city of Little Rock.”

If there was a “Best of” for business social media, K. Hall would certainly have my vote. It’s the kind of social media promotion that can’t be taught. I’ve been following it for a few years now, watching full 6- to 7-minute Seafood Saturday updates on Facebook Live, which Daron Hall typically hosts, taking the viewers around the store, visiting with co-workers and displaying what’s available. Around the boil outside, Devin Hall will often give a hilariously informative crawfish eating tutorial that involves a dance and sprint away from the camera that you have to see for yourself. There’s also the K. Hall & Sons Facebook church announcements featuring the character Hattie Mae, an elderly church-going woman who warns against all kinds of tomfoolery, ending each announcement with the directive: “Now govern yourselves accordingly.” Here’s a church announcement from a snow day:

“I’m gone let y’all young bucks know NOW we have cameras on each side of the building and drones in the air. Let us catch y’all doing donuts in the parking lot this year. This ain’t ‘Fast and Furious.’ My God.”

You get the sense, watching the videos and visiting the store, that even though the Halls are working, they’re having a good time with each other and the community.

“We just try to entertain, man, keep people wanting to come in,” Daron Hall said. “We’re a family business, and with everything going on, we just want to be a place where people can come in, have a good time and eat good food.”

They’ve succeeded at that. In addition to collecting many community awards over the years, K. Hall & Sons was inducted into the Arkansas Black Hall of Fame in 2016. Asked about his proudest accomplishment, Hall Sr. mentioned the Hall of Fame induction but said he’s especially proud to be part of the community he serves every day.

“It makes you feel proud when you have people come in and tell you they appreciate you being here. That’s always good.”