Three Fold had purchased the land on Rebsamen Park Road next to Pizza Cafe where the antique store Marshall Clements was previously located. The day Zhang was scheduled to sign with the building contractors was the same day Governor Hutchinson mandated the dining room shutdown in March of 2020.

Zhang wisely delayed. She ended up using the land to house a facility far smaller than what she had planned, a 160-square-foot mobile food trailer that opened in April of 2020 to help keep Three Fold afloat during the first wave of the pandemic. After a year, Zhang sold the land and soon after, announced that Three Fold would be opening a West Little Rock location in the former Panera space in May of 2021. Zhang said the expected six months of renovations turned into 14 due to pandemic-related delays. 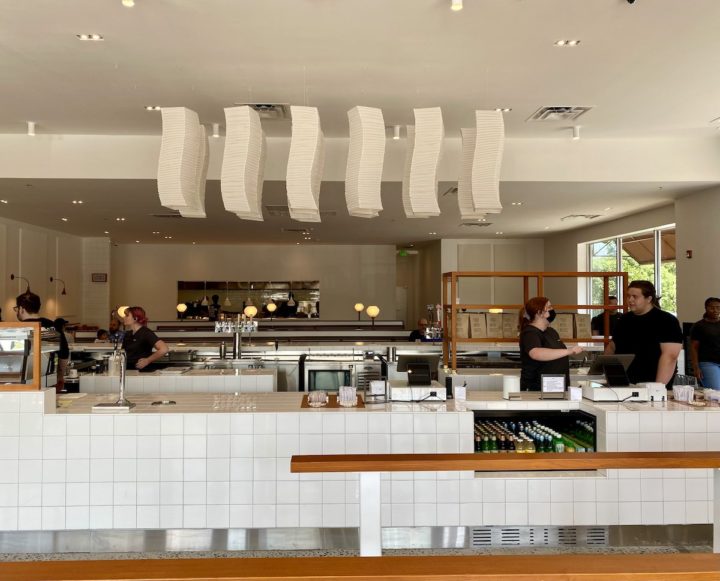 The result is a stunner of a space. It has the same minimalistic charm of Three Fold’s downtown spot, but with 800 more square feet than its Main Street spot. The patio out front features several tables and bar seating facing the parking lot. At the front of the restaurant is a long, wrap-around bar that includes the ordering station, an espresso machine, a shaved ice station, various teas served from a keg system and bar seating on the opposite side. An open kitchen takes up the back of the restaurant. The north side of the building has a walk-up window for to-go orders. 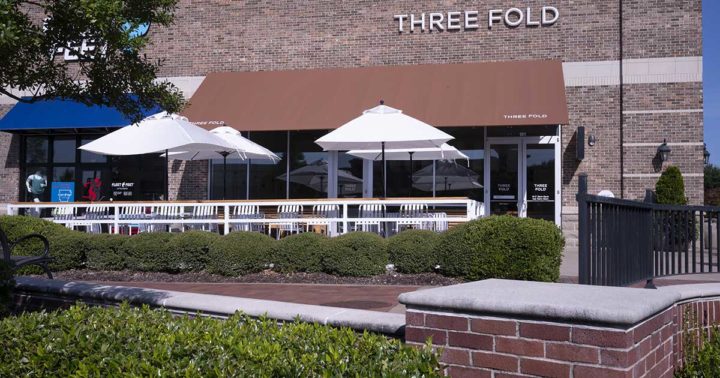 Three Fold expanded its menu for West Little Rock to include breakfast and a variety of shaved ice offerings that Zhang created for the food truck. It also has a selection of teas on tap, brewed at its production facility on Pinnacle Valley Road. The move to breakfast has a lot to do with the location itself, Zhang said. There was a demand for breakfast from customers who used to frequent Panera, and it was also encouraged by the landlord. When Zhang and I spoke in June, she put it perfectly, saying that if she didn’t serve breakfast, the only option would be Chick-fil-A to warm up the shopping center in the morning.

For a brief time Three Fold served a traditional Chinese breakfast at the downtown location, but it wasn’t popular, general manager Rebecca Yan said. So Zhang’s goal was to create a menu that incorporated Chinese culture and tradition with the American breakfast tradition. It wasn’t easy, she said.

“During my development I tore down my menu at least three or four times,” Zhang said. “I made a menu, I’m happy with it, and then I see a lack of the link with the cultures, so I have to kill the menu and start over again.”

Zhang wanted to create a menu for people on the go in the morning that worked just as well visually on plates for those dining in. 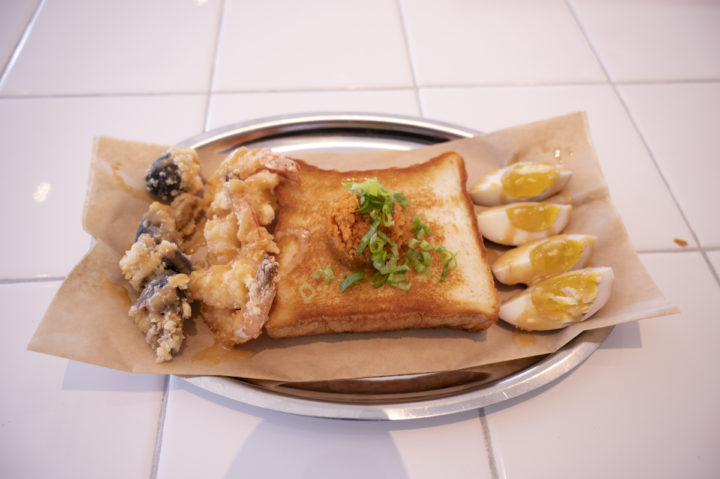 It’s a large, thick slice of bread that’s soft and fluffy, topped with a carrot spread and served with fried shrimp and mushrooms — each battered with a flourless starch breading — and a tea-scented egg. 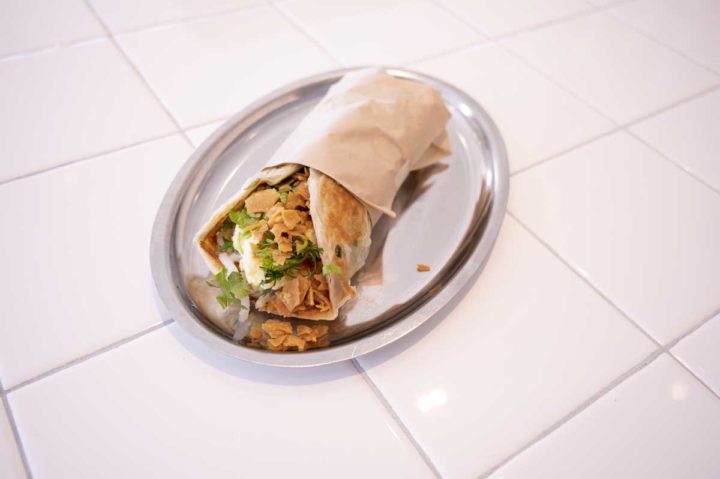 The Multigrain Congee Bowl is a savory porridge dish unlike any oatmeal you’ve probably ever had before. Congee is typically a rice porridge, but Zhang’s is made from whole grains that give it a distinctive purple shade. 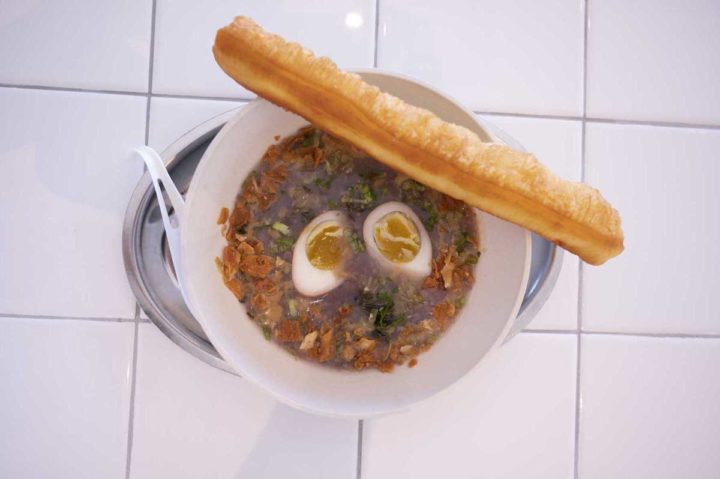 It’s topped with the same crispy crunchies, house pickles, green onions and a tea-scented egg. A long piece of youtiao (deep-fried dough) sits atop the bowl and extends the width of the bowl on both sides. Youtiao is what Zhang ate for breakfast growing up. It’s like a cruller without the glaze, or a churro without the cinnamon and sugar.

“When I grew up in high school, middle school, I go to the youtiao shop and they have only two items: youtiao deep fry and soy milk from the pot, fresh-brewed.” Zhang said youtiao is a very traditional Chinese breakfast and hopes by incorporating it with the congee a cultural barrier can be crossed, “but I don’t put too much hope,” she said with a laugh.

If your breakfast palate desires something sweeter, fried sweet buns are also on the menu, filled with traditional Chinese sweet pastes and drizzled with brown sugar syrup and sweetened condensed milk. Any donut seeker should make a point to find these buns. They come out hot, the texture is soft and pillowy, and the fillings are uniquely delicious. 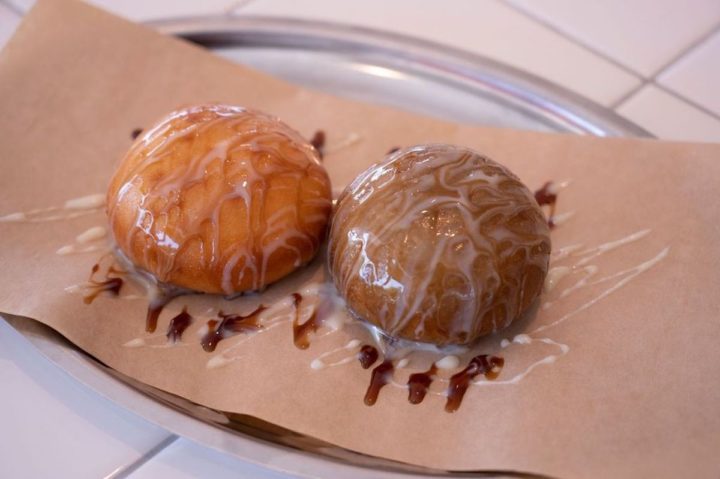 Zhang also made the decision to purchase an espresso machine rather than serve drip coffee. Though the main beverage focus is the craft tea brewed at Three Fold’s production facility, “We cannot ignore the fact that maybe eight out of 10 people walking in are gonna want coffee with breakfast,” Yan said. Three Fold is using beans roasted at Fidel & Co and incorporating regional Chinese spices with beverages like the Mala Latte, which a Three Fold social media post says highlights Sichuan’s signature tingly (ma) and spicy (la) flavors. There’s also the Black Sesame Latte and Yuanyang, a combination of espresso and black tea. All three are served hot or iced. 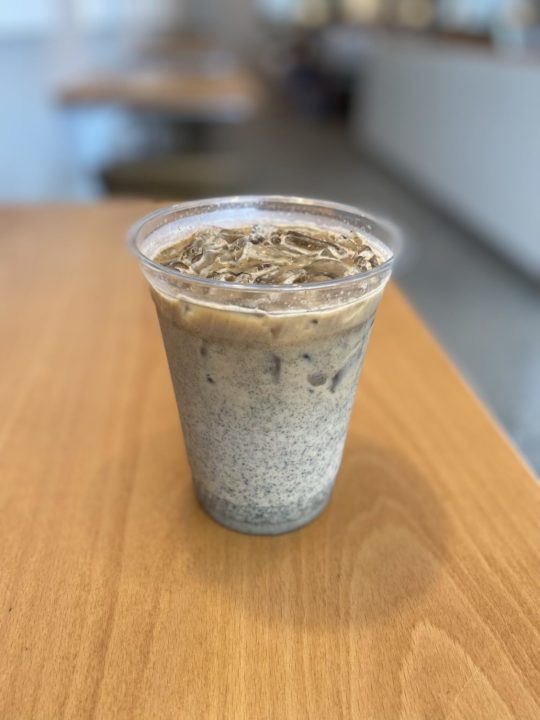 Three Fold started offering shaved ice concoctions while working out of the food trailer in the summer of 2020. Yan told me in an interview that year that they had been wanting to explore the traditional Eastern dessert (a highly skilled craft in Japan and a popular street food in Taiwan, she said) and the food truck seemed like a good place to test the waters. If you tried the shaved ice at the mobile truck, the game has changed. The texture of the ice is more like snow (the good snowball-to-the-face kind), laden with condensed milk and flavored syrups. Three Fold is offering four signature flavors: Creamy Lychee, Black Sesame, Bubble Tea and Creamy Mango.

Zhang said that the business flow is completely opposite out west as it is downtown and she’s having to adjust accordingly. Lunch is slower and dinner is busier. Gluten-free rice noodles are more in demand. But things are going smoother than anticipated, and the new staff is very good, she said.

Zhang said if breakfast goes well, a future Sunday brunch could be on the horizon.