In the 1970s, Max Brantley boldly asserted that “smoked meat is not barbecue, unless you’re a Texan. Barbecue is sauce, nevermind the dictionary.” In 1984, the late Doug Smith, of Arkansas Gazette and Arkansas Times fame, claimed “that the only real barbecue, or barbeque, is pork. To deny that would be to sanction what goes on in Texas, and the only people who know less about this subject than Yankees are Texans.”

However witty this sentiment might be, I find it woefully unconvincing.

While we at the Arkansas Times love a good Arkansas/Texas jousting, I think we can all agree that barbecue is much, much more than simply the sauce. Could I slather my oven-baked pork chop in some McClard’s sauce and call it barbecue? Of course not. To say that barbecue is simply about the sauce would actually be to sanction what goes on in Kansas City, where one would be hard-pressed to find a traditional live-fire barbecue pit. Instead, they seem to prefer those gas-assisted contraptions (otherwise known as fancy ovens with some wood shavings thrown in), slathering the finished product in sauce and calling it barbecue. Alas, they are Yankees and get a pass on account of ignorance, but I digress.

Arkansas has a somewhat loosely defined barbecue culture that is highly subject to external influences. Plenty of ink has been spilled about Arkansas being a crossroads state, Southern and Southwestern and Midwestern all at the same time, and so goes our barbecue. As Jordan Wright of Wright’s Barbecue told me, “When you think about Arkansas barbecue, really it’s a collection of the three regions that surround us.”

Much of our statewide barbecue culture is informed by our neighbors across the Mississippi River in Memphis. This is evidenced by the fact that most anywhere you venture in Arkansas you’re going to get slaw on your pork sandwich, most of the time without even asking, because that’s the way God intended. But in recent years another influence has been creeping into the state up from the southwest, and that’s Texas-style brisket.

Before all the Texas-bashing Arkansawyers jump down my throat, consider this: The late Justin Nolan’s landmark 2009 anthropological study, “Piney Woods Traditions at the Crossroads: Barbecue and Regional Identity in South Arkansas and North Louisiana,” reinforced what has long been known in that region: that the locals smoke beef brisket. As a matter of fact, Nolan, an El Dorado native, found that “beef brisket” were the most frequently mentioned words to describe the barbecue of the region by local pitmasters. For context, “pulled pork” was the fourth most frequently mentioned. One unnamed elderly pitmaster near Magnolia is quoted as saying, “Truth is, here’s the truth — it’s a melting pot here. Black, white, east, west: Everything comes together in our barbecue. You got the Cajun spices and the sweet ribbon cane from Louisiana, a hint of vinegar from the east, the sweet tomato sauce — that’s ours! The beef brisket’s so popular around here and chili notes that I suspect must come from Texas, along with their pinto beans. We’re pretty tolerant around here. In fact, I think we’ve been adopting a bit of this and that from each other all along.”

Of course, it makes sense, given the Piney Woods’ geographic position and shared cultural connectivity with East Texas, that some culinary traditions would be informed by its neighbors — and vice versa. When surveying the barbecue of East Texas one will find just as much pork as they will brisket.

Anyone paying attention to the barbecue scene in Arkansas over the past few years has certainly seen the emergence of the brisket craze. Jordan Wright’s wildly popular Wright’s Barbecue at Johnson kicked things off in Northwest Arkansas, and now one can find respectable brisket in almost every corner of the state, save the middle and lower Delta where pork still reigns supreme.

Atop Arkansas’s brisket mountain sit three kings: Knightfire in Searcy, Wright’s in Johnson and Ridgewood Brothers in Russellville. These joints borrow heavily from a Texas style of meat smoking, with their focus on beef, large offset pits and salt and pepper bark. There’s no denying that these joints are some of the very best in the state. Some pork purists will balk at this statement, and that’s understandable, but only if they’ve never experienced the virtues of a properly prepared brisket.

In Searcy, Matt Knight has singlehandedly put his town on the Arkansas barbecue map. What started out as a food truck in March of 2018 eventually led him to open a brick-and-mortar restaurant in March of this year.

“Really, it just started out as a hobby,” Knight told me. “Seeing people on TV, you know, I figured I could do that, too. And when I did I realized I actually had a talent for it. I love hearing people talk about brisket now because it was totally nonexistent in Searcy. Nobody wanted it, nobody talked about it, there was no interest. I’d say my biggest inspiration was the fact that nobody wanted it [brisket]. I’ve had really good brisket in Texas, and I wondered why people didn’t go crazy for it here.”

Knight says it took a while for his customers to “get it,” referring to brisket. For one thing it’s more expensive. Today, however, he sells about as much brisket as he does pork, going through about 350 pounds of brisket vs. 400 pounds of pork a week.

All the meat at Knightfire rolls off an impressive 1,000-gallon offset pit made by well-known makers Primitive Pits of Georgia. When asked about the benefits of this style of barbecue pit, Knight said, “Personally I just think it’s real barbecue. It’s real wood, there’s no gas assist, it’s a live fire. To me, it makes the process more of a craft because you have to actually master the way your pit cooks. The top places in the world, and I consider Texas-style barbecue to be No. 1 out of them all, none of them use gas-assisted, rotisserie-style pits. They all use offsets. Bottom line is it just puts out a better product.”

Jordan Wright, of Wright’s Barbecue in Johnson, Bentonville and Rogers, agrees on all accounts. “Once you’ve had a bite of moist, properly rendered brisket,” he explained, “it suddenly becomes an experience. Compare that to something that’s just chopped up and thrown on a plate with a bunch of sauce, you know, like they do in Kansas City. It’s better — it just is. Texas-style brisket is the king of brisket.”

And the Texans have taken notice of our state’s brisket, most notably Texas Monthly’s esteemed barbecue editor Daniel Vaughn, who ventured up to Northwest Arkansas back in October of 2019 to write a feature called “Wright’s Barbecue Brings Texas Smoke to Arkansas.” Vaughn said the brisket at Wright’s was “the best brisket I’ve ever found in Arkansas.”

Despite the praise, Wright stays humble. “You’re not going to be perfect 100% of the time. It’s barbecue; you just aren’t. All we’re trying to do is get better.”

If the dedication of his customers is any indication, the approach is working. Since starting his food truck in 2016 and moving into his Johnson brick-and-mortar in 2017, he’s opened two more locations in Bentonville and Rogers, with a fourth rumored to be opening next year in Little Rock. All the meat at Wright’s receives its treatment via one of 11 1,000-gallon Moberg offset smokers. For Wright’s, brisket is by far the most popular menu item, with brisket sales almost doubling that of pork butt, ribs, sausage and chicken combined. 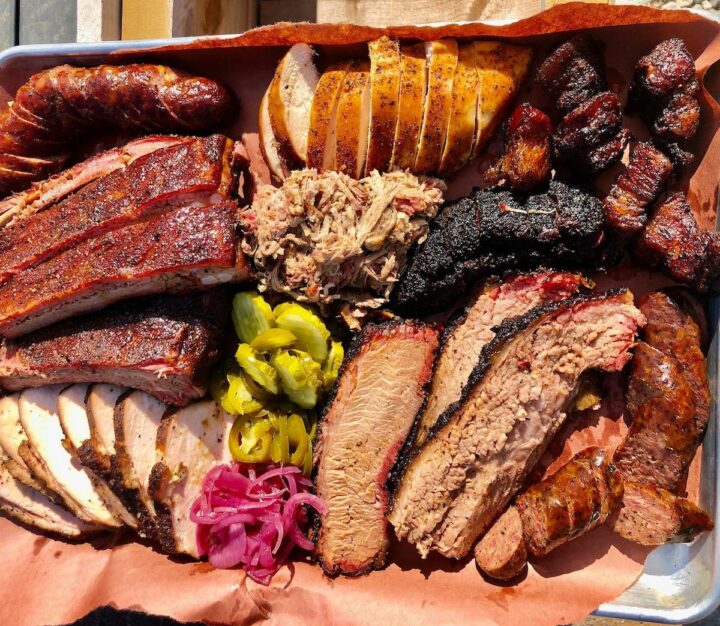 THE WRIGHT WAY: Since starting his food truck in 2016 and moving into his Johnson brick-and-mortar in 2017, he’s opened two more locations in Bentonville and Rogers, with a fourth rumored to be opening next year in Little Rock.

I asked Wright about the benefit of using offset smokers for his barbecue. “It really comes down to bark development and the way the air moves from end to end. Using an indirect live fire is key to that. It’s really hard to do a propane-assisted rotisserie brisket. It can be done, but a lot of times the bottoms will get burned or they’ll cook too fast and tighten up.”

In Russellville, the newest kids on the brisket block have seen a meteoric rise in popularity. Grant Hall and Robert Couser, owners and pitmasters at Ridgewood Brothers, have a similar story as their Arkansas brisket comrades. In February of 2019 they turned their backyard passion into a food truck, and in a couple short years plans were set into motion to open a brick-and-mortar right on Main Street in Russellville, slated to open mid-November 2022.

The meat at Ridgewood Brothers is smoked on a 1,000-gallon offset Primitive Pit, the same brand used at Knightfire. By the time the brick-and-mortar opens in mid-November, Hall and Couser will have expanded the smoker lineup to include four 1,000-gallon Primitives, plus a direct heat pit (complete with a whole-hog flipper) made by Muleskinner Smoke Rigs of Bristol, Texas.

I asked Hall about the benefits of using the offset-style pit. “It’s really the perfect machine to cook a brisket, when you think about it. What you’re essentially trying to do is cook two different cuts of meat that are attached in the middle.” He means the two sides of a brisket: the fatty side and the lean side, known as the point and flat, respectively. The flat tends to cook quicker because there’s less fat to render.

“With an offset pit you get the heat coming from one direction,” Hall said. “You’re cooking with hot air, so you can position the point, the fatty side, so that it absorbs all that heat. The flat doesn’t get bombarded with heat like the point does, so by the end of the cook the temperatures even out and both ends of the brisket are done at the same time. In Kansas City they cut off the point and turn it into burnt ends because they don’t understand how to do it.

“We don’t really call it Texas-style just because we don’t want to be put into a box. In Texas the style is so rigidly defined that it’s kind of hard to branch out from that. We want that freedom to do other things, to put our own regional spin on it. It’s West Russellville style!”

Whatever you want to call it, there’s no denying that brisket barbecue is on the rise in Arkansas. A major indicator of that is the fact that all three of these establishments started out as humble barbecue food trucks that became so popular in their respective communities that they moved into brick-and-mortars, and in Wright’s case, three going on four restaurants.

The pork purists and perhaps some gung-ho Texans will split hairs and say that brisket isn’t true Arkansas barbecue, but I don’t really care what they have to say. As far as I’m concerned, if you make it in Arkansas, you can call it Arkansas barbecue — never mind the haters, the gatekeepers or the Texans.