Read this month's issue
Browse the issue archives
Loading…
Advertisement
Home Dining Don’t skip dessert: One Eleven at the Capital is back

First it was an Instagram story of Chilean bass at One Eleven from a service industry professional I follow. Then it was another post from a service industry friend on his anniversary at One Eleven, using a knife to cut through a large red mushroom that turned out to be a forest cake in what has to be one of the most intriguing yet deceptive desserts in Little Rock. The best restaurant tips come from service industry people, and when they’re outside of their places of employment sharing stories from other restaurants, follow the scent.

One Eleven at the Capital (formerly Ashley’s) reopened for dinner in October after a pandemic shutdown that lasted two and a half years. Former executive chef Jöel Antunes — a James Beard award winner who came to Ashley’s in 2013 and was instrumental in the restaurant’s transition to One Eleven  — announced he was departing the hotel in January of 2020. In July of last year, Brad Izzard, a native of South Africa, was named executive chef of the entire hotel. Izzard previously served as chef de cuisine under Antunes at One Eleven. One Eleven announced in October it would be headed by Izzard as well as signature chef Alex Lobanov.

There’s really no better time to visit Capital Hotel than in December when the massive 20-something foot tall Christmas tree takes up residence in the center of the hotel’s elegant lobby and becomes one of the hottest Christmas card photo destinations in town. Among the Christmas wishes we spotted in Santa’s Christmas Book at the foot of the tree: a child asking if their puppies could live forever.

One Eleven definitely feels upscale, but it has a contemporary, comfortable vibe. The open dining room is nicely lit, not too bright but not too dark, with abstract origami paintings lining the walls and windows overlooking bustling Markham Street on the restaurant’s north side. Speaking of the windows, people kept sprinting by throughout the night. Was it hard-working valet drivers, ambitious joggers, figments of our imaginations? Who knows? It was all part of the evening’s mystique.

We started with cocktails. I ordered the Midnight Manhattan, which substitutes Amaro for vermouth, and it was excellent. For about two-thirds of the drinking experience I was disappointed that it wasn’t garnished with a cherry, but it was. As the drink neared the bottom of the coupe glass, I saw my cherry garnish in a fixed position in a divot at the bottom of the glass. So much intrigue.

My friend Andy, who’s a longtime bartender, was excited to see a split-based rum daiquiri on the menu with rhum agricole and amaro. He described working outdoor events for a bar in Austin, Texas, and everyone working would get split-based rum shots that they called “snaquiris.” Andy explained that rhum agricole differs from rum because it’s distilled from cane sugar rather than molasses. The Aperol spritz (surely popular everywhere right now because they’re the number one prop in the new season of “White Lotus”) and vodka martini were also winners at the table.

Our waiter brought out a board with house focaccia and a lovely pink-colored black currant compound butter that everyone enjoyed before we ordered the Crab Cake ($24), the One Eleven Caesar Salad ($16) and the Mushroom Tortellini ($19) appetizers.

Everyone at the table was thrilled with the Mushroom Tortellini filled with delicate beech mushrooms, Italian grana padano cheese and a butternut squash velouté sauce. It appeared to be topped with a foam and was garnished with colorful bulbs of butternut squash that we all mistook for cherry tomatoes. The pasta was soft and tender and seemed to almost dissolve in your mouth. One of my dining companions described the creamy velouté as absolutely lickable.

The single crab cake was situated in the center of a unique serving dish I’ve never seen before that had a porous outer layer. Alongside the crab were three dollops of red pepper coulis and a flavorful charred corn salsa. The crab was topped with little bits of crispy vegetables.

Someone at the table thought it was odd that the serving was was a single crab cake, but it was a substantial amount of crab packed into the cake. We couldn’t detect a lot of breadcrumbs. My friend Amy said it reminded her of French souffle cake she made in culinary school and that it had “just enough egg to suspend it in a pillowy cloud.” It was delicious and I couldn’t leave it alone.

The One Eleven Caesar wasn’t a hit with everyone at the table, but it should be noted that it was ordered sans bacon. Keeping with the dinner’s theme, the wedge-style presentation with Caesar dressing artfully cascading down the sides of the romaine wedges was appreciated.

I thought the dressing was tasty, but it could’ve been used more sparingly. My partner remarked on the anchovy flavor favorably, but one friend — who said the best Caesar dressing she’s ever had was whipped tableside in Mexico — didn’t care for the dressing.

The Chilean Sea Bass ($49) was an excellent and hearty portion of fish plated on top of an earthy celeriac puree and topped with a dynamite shrimp sofrito that added a nice texture and umami flavor to the fish. Adjacent to the sea bass was a mysterious mound of clear lemon marmalade that my friend likened to vaseline. However, the lemon marmalade provided a really nice addition to each bite and was tasty enough to eat on its own. I really enjoyed the sourdough crust on the outer edge of the fish.

The Pan Seared Duck Breast ($37) was served with a carrot puree, roasted pear and a blackberry balsamic reduction. My dining companion was impressed with the plating and tenderness of the duck, as well as the balsamic and roasted pear. It wasn’t starchy at all, but still a satisfying portion, he said.

The Beef Tenderloin ($58) was served with a succulent Bordelaise sauce,  pomme fondant potatoes, black garlic and broccolini. One of the potatoes had a whole roasted shallot on top that made for the perfect, piquant bite. The tenderloin itself was ordered medium, which we all agreed was a spontaneous mistake. Medium rare would made for the perfect texture for the tenderloin which was a substantially thick, large portion.

I hope you’ve stuck around for the dessert portion of this piece because it was a showstopper and a perfect ending to the evening. One Eleven is a restaurant you should experience when you’re not in a rush and your night revolves around dinner. It’s a great spot for a special occasion, and if you want to wow someone with dessert, go ahead and order both of these with reckless abandon.

I already knew I was going to order the Black Forest Cake ($16) before I saw the dessert menu. My friends Alex and Ryan posted a video on Instagram of one of them cutting into the cake, which is made to resemble a forest bed with two mushrooms resting on top. I was delighted to see it in person when I saw our server delivering three of them to a table nearby. When I inquired about it our waiter told me it’s the most stunning dessert he’s ever had. He would later explain the inner workings of the cake to me (three times, because I’m bad at my job).

Chocolate sponge cake makes up the forest bed element, and it’s garnished with remarkably light microwave sponge cake and brandy-soaked cherries. The shiny mushrooms are made with tempered chocolate formed around a layer of chocolate mousse. The cherry preserve is encased in the center of the white chocolate stalk. On the side was a milk chocolate sorbet. 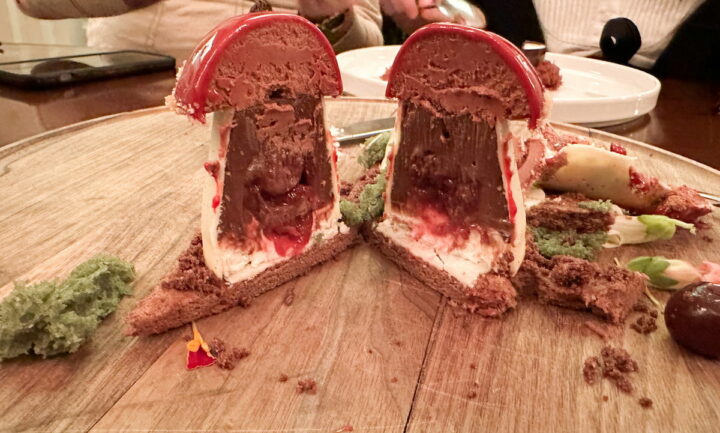 This cake could’ve been bland and flavorless, and I still would’ve been impressed. But it was absolutely fantastic. The chocolate mousse inner layer with the cold cherry preserve, soft pillowy sponge cake and bits of tempered chocolate came together perfectly and was also texturally pleasing. Added bonus for the delightful, extremely light forest green microwave sponge cake.

Amy and Andy ordered the Chocolate Victoria Cake, which has an outrageously delicious vanilla chantilly cream at the top and a layer of sea salt caramel in the center.

The base was the Victoria cake, which our waiter explained was flourless. It’s wrapped with a crispy chocolate collar that was delicate but strong enough to hold it all together. It’s garnished around the edge with microwave sponge cake, chocolate streusel and chocolate ganache. Once the outer chocolate mold is broken, the vanilla chantilly cream starts to very slowly ooze outward. My friend Amy said the salted caramel at the center made her want to go back for another bite immediately and that the microwave cake around the edge visually resembled purple sea moss or bits of coral reef. Everyone agreed it was excellent both in presentation and flavor and we housed both of the desserts with no shame.

Reflecting on the two-plus hour experience after obligatory post-dinner selfies in front of the Christmas tree, we all agreed that One Eleven hit all the right notes when it comes to the full menu, service and presentation. We weren’t there to celebrate a special occasion, but it felt like one anyway.