The face of Yeyo’s Mexican street tacos was born to migrant farmers in California, raised in Michoacán, Mexico, and is now happy at home in Northwest Arkansas. The 52-year-old father of three is farming with family and wowing people with tastes tied to his deeply held heritage.

Chef Rafael Rios has grown to prominence since moving to the area 16 years ago. He and his family started farming in Northwest Arkansas in 2006. They were selling produce at local farmers markets, but didn’t open their first food truck until 2012. Just a few years down the road, Rios has been nominated for two James Beard Awards for best chef in the south region. Talk about a rising star!

“The yellow food truck in downtown Bentonville is the beginning of our story,” Rios told me during a recent interview. “It’s how the restaurant business started for us. It’s the truck that put us on the map.”

He holds that truck dear, but those first few years were hard. Rios said tears were shed daily. He and his wife weren’t sure the business would survive. “Nobody knew us back then,” he said. “Then people started seeing us at the farmers markets and figured out what we were trying to do with our food. It got better quickly.”

What were they doing with their food? What was the magic behind those delightful tacos and beautiful burritos? It was simple, really. The Rios family was using old world techniques and locally grown produce and meats to create a premium product that their customers found delicious.

From humble beginning a Mexican food empire is emerging

The success of the food truck spurred expansion. In 2017, Yeyo’s El Alma de Mexico opened inside the bustling culinary enclave known as 8th Street Market in Bentonville. Next-door neighbors include a brewery, a chocolatier and a culinary school. It’s a bull’s-eye on the region’s culinary map, which has most certainly helped Rios get noticed.

El Alma de Mexico is translated as “the soul of Mexico.” Rios said the name fits the place because it embodies the best of Mexican culture. “It’s the flagship for Mexican food, in my opinion. It’s affordable, approachable and simple, but complex in its preparation.” It’s where Rios spends most of his time.

The specialties are street tacos, burritos and enchiladas. The restaurant makes tortillas by hand every Monday; around 36,000 over the course of 12 hours. An array of meats are available, including carne asada, carnitas, chorizo and cochinita pibil.

In 2020, Rios opened a cocktail bar in downtown Rogers. Eerily reminiscent of the yellow food truck, the first year at Yeyo’s Mezcaleria y Taqueria was tough. The place completely shuttered during the height of the coronavirus pandemic. But just like the yellow food truck, it survived. And it’s back in a big way. Rios wants people to think of it as a place to meet friends, sample the many varieties of mezcal, and immerse themselves in the colors and music of Mexican culture. Imagine a place where all five senses are piqued at the same time. Throw in a splash of mezcal and you have yourself a party.

The latest addition to the Yeyo’s family is a blue food truck Rios calls “the blue demon.” It is a 1952 Ford F6 with a barn-style box in the bed that opens wide to greet customers. Unlike the yellow food truck, which sits stationary on the Bentonville square, this one is meant to be on the move. “It’s the future because as we move forward there is demand for mobile catering for large crowds,” Rios said.

The journey to Arkansas

Rios’ parents were seasonal farm workers who shifted between Michoacán, Mexico, and the San Joaquin Valley in California as the seasons changed. Rios was born during one of those trips to California. His childhood was spent mostly in Mexico, so he identifies deeply with his Mexican heritage.

The Rios family relocated to Oxnard, California, in 1989, when Rios was 14. A few years later he joined the U.S. Army and was deployed overseas. He became interested in the foreign food he was exposed to while on assignment. Turkish cuisine was particularly enlightening. Already a veteran of farming and agriculture, he got a bit of an itch for cooking during his service.

Rios returned to California upon exiting the Army. Eventually the fast pace and lack of space in The Golden State started to wear on the entire Rios family. “The cars, the trucks, the people, the music — it was almost like being in a science-fiction movie,” he said.

The Rios family had connections in Northwest Arkansas. Upon closer inspection they found space, affordability and a chance to be, as Rios put it, “normal people with chickens and cows.” It was the complete package.

Spend a few minutes with Rios — or in one of the Yeyo’s restaurants — and you will quickly discover that family is a top priority. The patriarch of the Rios family is Hector Rios. He is known as Don Yeyo, the namesake of the restaurant business. Brothers and sisters are involved in the business. Rios has three kids of his own — ages 21, 17 and 8. Having everyone within arm’s reach is important.

“We come from a family that has really strong ties to simple values,” Rios said. “Character and working hard are important to us. We feel that it is in the best interest of the family to be together, so the nephews and the nieces get to know each other.”

This strong family orientation extends to employees as well.

“I have a leadership style that is linked to family,” Rios said. “Hopefully, our employees see Yeyo’s as their family business, too. If they see it as their own, they will care more about what happens here. They will take better care of our customers.”

Rios has become a mentor to many of his employees. “We have a lot of younger kids working here, especially in the front of the house,” he said. “They probably see me as a father figure.” 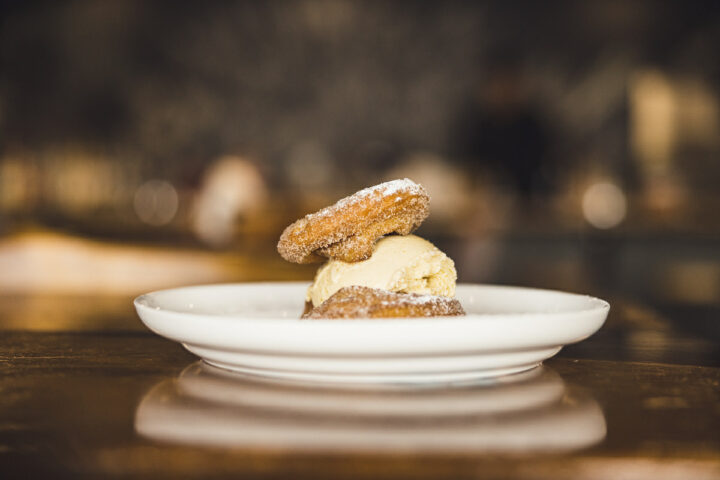 Rios looks at the younger generation as a key to the success of the local culinary scene. There isn’t enough outside talent — people who are willing to stay in Northwest Arkansas long-term — to make the engine run. Growing local talent for back- and front-of-house operations is important to creating a sustainable industry. He points to one of his neighbors at 8th Street Market — Brightwater: A Center for the Study of Food — as a sign of hope. The school gives local talent a chance to sharpen their skills and prepare for future employment in the food industry.

The tacos, burritos and other menu items at Yeyo’s are not the cheapest in the world. Sometimes customers look at the menu, or their final bills, and wonder what is going on with the prices. For Rios, the prices he charges reflect the quality of the food.

“We are here to change the perception that Mexican food is cheap,” he said. “That’s why it’s so important to me to serve great food at a cost that has a great value based on the processes we use to make the product.”

Quality is important, but so too is the way the food is made. Painstaking care is taken to recreate food in the image of Mexico. Handmade tortillas, rich mole sauce aged over time, produce picked at the peak of ripeness — all of it makes a difference in the final product.

“We pay special attention to our ancestral ways of cooking, and we’ve never let down on the quality of our products,” Rios said. “We source locally as much as we can. Plus, we have our own farms, so mom and dad and other family members are bringing in fresh produce every day.”

As with most consumables in this age of inflation, prices are up for ingredients and supplies used at Yeyo’s. Rios estimates costs have increased between 15-35% in the last year alone. Rios said he has raised menu prices to keep up with inflation, but also to keep paying a living wage to his employees. “It doesn’t help me or our customers if employees go home at night worried about how they’re going to pay their rent.”

Fortunately, Yeyo’s customers see great value in the product despite increasing prices. Not only do they keep coming back for more, but the number of new customers coming through the door continues to swell. They have accepted higher menu prices because their taste buds tell them it’s worth it.

“We are here to value our work,” Rios said. “We don’t just give away things for free.”

The Rios family isn’t the first with Mexican heritage to move to Northwest Arkansas. That trend has been in full swing for over three decades now. Rios said he appreciates the groundwork laid by those that arrived before him.

“My experience has been 99% great here in Northwest Arkansas,” he said. “The work around inclusion was largely done before we got here. The early arrivals were the true pioneers. We are breaking ground in other ways.”

While community acceptance was largely felt upon arrival, there were some obstacles to getting his business up and running. He points to a lengthy permitting process that could have gone much faster. Although the Latinx community was well established by then, a farm-to-table taco truck run by one of its members was a peculiarity. Those in power were skeptical that someone like Rios could find success in downtown Bentonville.

“We are here to change that perception,” Rios said. “That’s why it’s so important to me to serve great food at a cost that has a great value based on what we do and the processes we use to make the product.”

Skepticism has drained as recognition ramps up. The James Beard Award nominations have certainly raised Rios’ profile, even if he hasn’t yet taken one home.

What would it mean to Rios if he were to eventually win the coveted prize?

“It would be a way to make another groundbreaking step that can empower the Latinx community to do great things,” he said. “To be a role model for them sends a very strong message to those that are here, and those that are moving here, as to the good we can do in this region.”