Word comes from the regular crowd at Midtown Billiards that the bar’s fiery matron, Maggie Hinson, has died.

Tributes and remembrances are undoubtedly forthcoming — in droves and in toasts rung in with clinking glass — but for now, here’s a bit of Hinson lore from former Arkansas Times staffer Jacob Rosenberg, part of “A Week at Midtown,” published in our July 20, 2017 issue.

Around 9:30 p.m., a group circled around Hinson and began chanting her name with their hands in the air. “Maggie! Maggie! Maggie!” No one is more responsible for Midtown’s reputation than Hinson. She long has not just been an owner, but a kind of matron.

When she first got ownership of the bar, this meant caring for old men — a good bit of them holdovers from the previous owner. Midtown had originally opened in 1940 as Jimmy’s Midtown Billiards. Back then, the name made more sense: There was an eponymous Jimmy, it was his bar and it was located on Seventh Street, which was midtown at the time. Not until the 1970s did it move to South Main Street. Under Jimmy’s reign, the bar would open at 6 a.m. and close at 6 p.m. It was a pool hall and a gambling spot. Older men would mix in the mornings with prostitutes who came from a safe house down the street to get coffee. 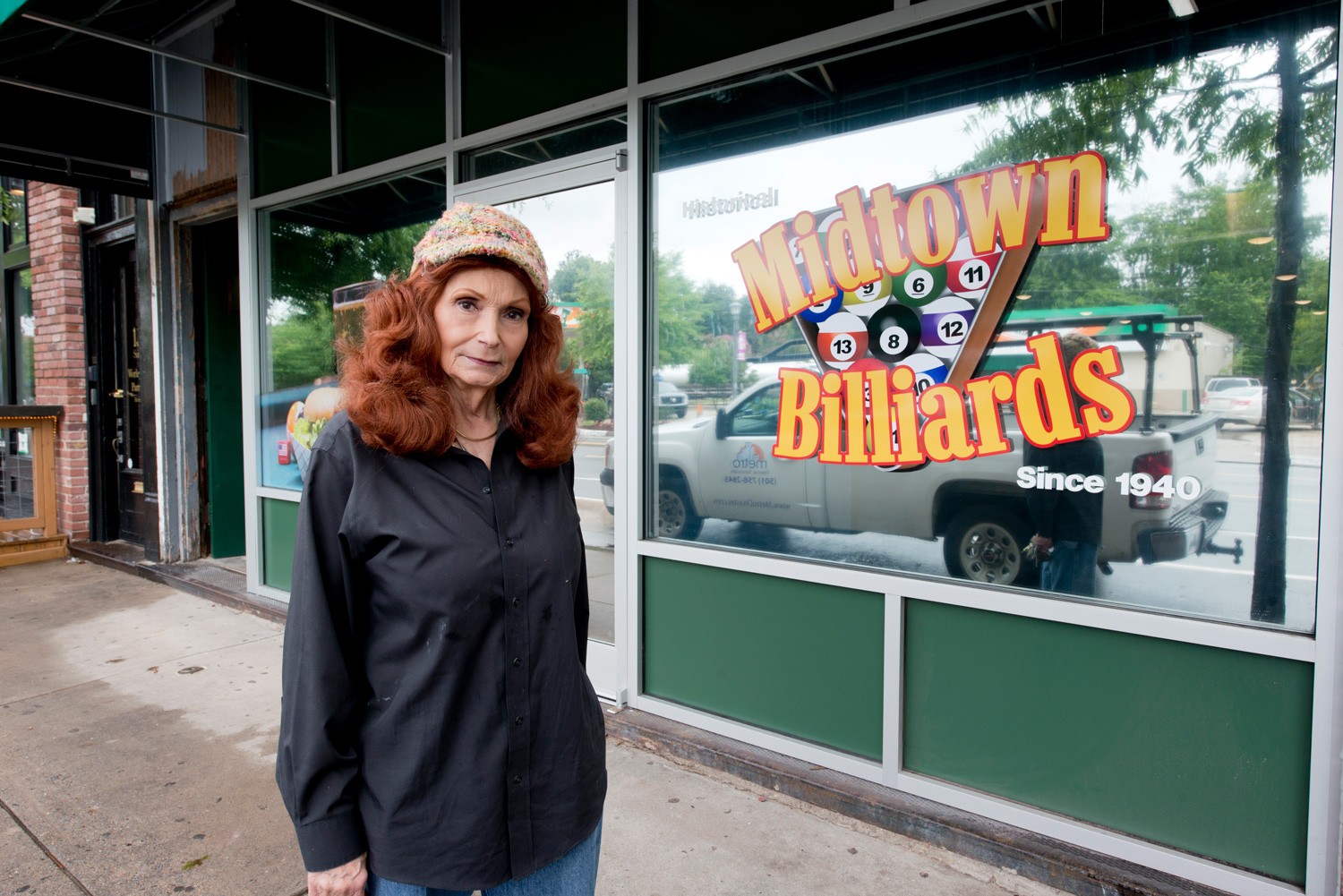 Near the end of the 1980s it was sold to Maggie and Jim Hinson. (She thinks; it was hard to pin down a date on the transaction, she said.)

Hinson had learned how to bartender when she was 18. On her way out to California, from her home in Stuttgart, she stopped in Oklahoma City and worked at a bar for two years called the Horseshoe Lounge. “It was shaped like a horseshoe,” she said, and she worked the entire bar and all the tables. Then, she finally caught that ride to California and, in her words, “hung out.”

I asked if she liked it and her reply was: “If you remember if you liked it there — during my time — you were not there.” It was the 1960s.

In San Francisco she got married. She and this husband traveled the world, but eventually things fizzled. In Hot Springs she met another man, Jim Hinson. “Oh, what year was that? Good God,” she wondered. “Maybe, 37, 38 years ago?” They lived a good life together: She ran an accounting firm in North Little Rock and he was the deputy director of finance for the Department for Human Services. They had hobbies, too. “He was a gambler and he liked to gamble and that’s what he did. And we got along great,” she remembers. When Jim retired he bought Jimmy’s. “When we bought this, my husband wouldn’t let me come in here because he said it was too rough,” she said. “But, then he changed his mind after he found out there was some domino players back there and he could play. Somebody needed to work.”

Maggie Hinson ended up running the place. “I’ve worked the door, I’ve been a bartender, I’ve been a cook, I’ve been a plumber. Whatever it takes,” she said. “I breathed life into the place.” She would come and make a meal for everybody — whole hams, cornbread — no set menu. “It was kind of a nursery for old men. They’d come in and I’d feed and water them,” she said of the first years. “They were my kids, all those old guys. I just loved them to death.” She stopped for a moment. “And they’re all gone now,” she finished. Her husband, too; he died three years ago.

There were new regulars now — chanting around her as the bar reopened — and an employee walked past me and whispered in my ear, “See: Everybody loves Maggie.”