The year 2020 was so god-awful that numerous posters on Twitter and Facebook mused about what might be happening in the year 2020 in a better, alternate universe. You know, a universe in which the coronavirus might not shut down the world, or a universe in which the president wasn’t an utterly clueless orange Bozo and didn’t casually suggest — from a White House podium, no less — that a couple of shots of Clorox might take care of the problem.

And maybe in that happy other existence, the work of Michael Jukes — a prolific Little Rock artist of singularly quirky comics and excellent music and a contract graphic designer — would be known, widely available on retail shelves and routinely celebrated. The announcement of a new Jukes project – in this instance, a comic book titled “Jukes Comic Book One” – would at least draw some attention. Perhaps “Jukes Comic Book One” would be distributed widely by a reputable company, instead of being hustled out by the artist himself on Amazon. 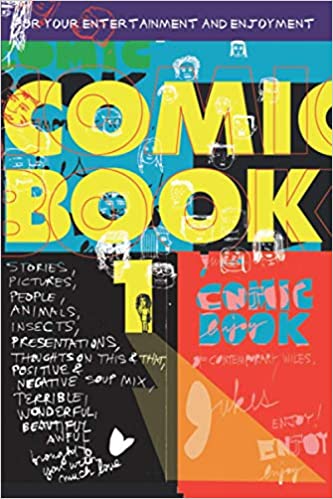 At first blush, the story of Michael Jukes seems to fit in the broad and seductively alluring category of “outsider” or “reclusive” artist. Arkansas has certainly had its share of creative types who toiled away in relative obscurity.

The Heber Springs photographer Disfarmer (born Michael Meyers), for one, made portrait photographs during the Depression and into World War II. His eccentricity was striking; he came to believe that a tornado picked him up as a baby and dropped him on the doorstep of an Arkansas farming family. After he died alone and unrecognized in his studio in 1959, the plates of Disfarmer’s photos were rescued from a trash heap. Once his work was published many years later, he was seen by collectors and art critics around the world as one of the great photographers America has produced.

Whether Jukes’ work languishes or flourishes within his lifetime remains to be seen. The important point is that Jukes has been a creative dynamo since he escaped from the clutches of North Little Rock’s Northeast High School in the early 1970s, and he’s been making compelling music and comics ever since, all without achieving what famous Arkansas recluse Charles Portis called “escape velocity” from Arkansas. That is not to say Jukes didn’t try. 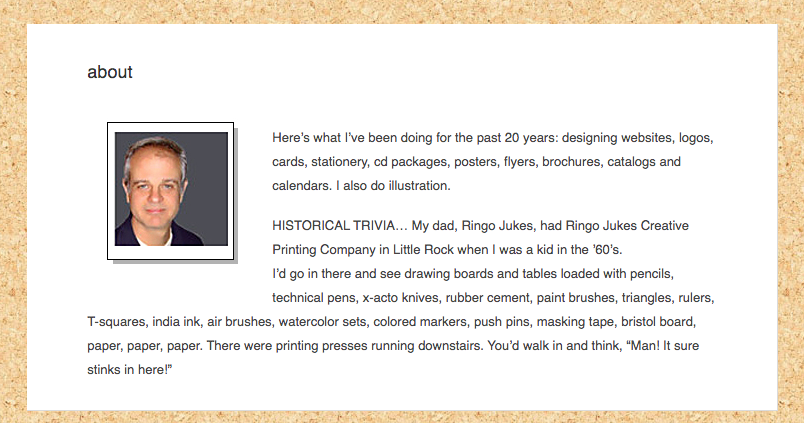 In 1990, something wild and unexpected happened in the Little Rock rock music scene.

The Gunbunnies, a four-member “alt-rock” band led by wiry-haired singer/songwriter Chris Maxwell, landed a major label record deal with Virgin Records. In 2021, it’s hard to overstate what a major label contract with its nation-wide distribution (in the pre-internet age, no less) meant to a band sitting smack dab in the middle of flyover country in Little Rock. For the nascent local music scene at the time, it was a spotlight. It was validation. And it was oxygen.

Everything in the scene that followed in the wake of the Gunbunnies – venues with an ear for original music, like Juanita’s and Vino’s, and the birth of bands like Ho-Hum (which would lands its own major label contract), Techno Squid Eats Parliament, Ashtray Babyhead and later, Trusty — wasn’t the singular responsibility of Maxwell’s band. Yet the celebrated deal upped the stakes and showed what was possible. For forever-insecure Arkansas artists there was now at least a road map to the big time, maybe even to achieving “escape velocity.” 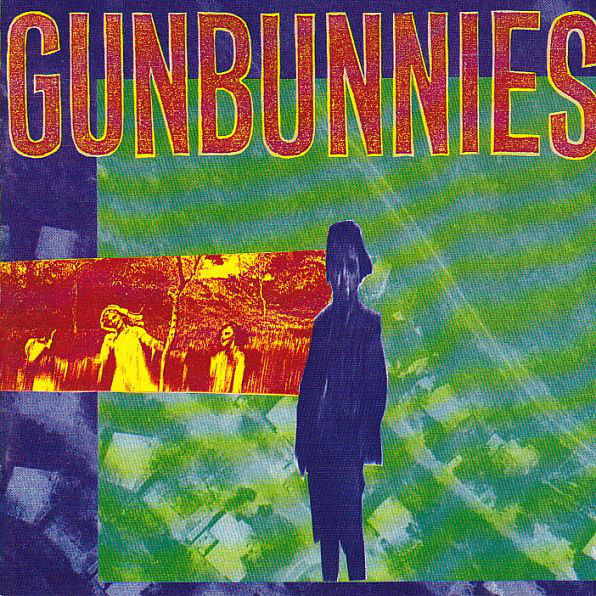 In his post-Gunbunnies career, Maxwell has carved out a position for himself in the national music industry — an industry seemingly designed to use up and toss aside talent as quickly as possible. Maxwell left Arkansas for New York and put together the much-admired band, Skeleton Key. Today, Maxwell is recording solo albums along with his work with Elegant Too, a musical partnership with Phil Hernandez, making award-winning commercial jingles and music for the cartoon series “Bob’s Burgers,” among many other projects.

“Michael never really hung out with the Gunbunnies, but he had a huge influence,” Maxwell said. “[The Gunbunnies] last album, “Great Big Diamond,” which was really [a set of] demos for Warner Bros., included Michael on one song ‘Fall Between the Cracks.’ Michael also co-wrote the song ‘Wonderview’ with me on that album which came out on Max Recordings in 2009.”

In 2020, Maxwell was asked by American Songwriter to name “Five Songwriters Who Matter Most.” Joni Mitchell and James McMurtry made his list. So did Michael Jukes.

“This is one that will take you to the Google machine,” Maxwell’s entry states. “Trust me, you don’t have his music. Recorded over decades with an ever changing lo-fi format, churning out tons and tons of songs and they’re all gorgeous. The greatest songwriter that you’ve never heard and one of the people I was most influenced by when I started out. I need more room than a paragraph to talk about his music. They defy category. At moments a song may sound familiar but then you realize it’s nothing you’ve ever heard before. The words and melodies follow you around like shadows — impossible to ignore or forget.”

Jukes grew up in North Little Rock as the oldest of five siblings. His mother, Louis, “did print advertising for products and fashion modeling for magazines and newspapers, radio ad voice-overs.” His father was a commercial artist and was owner of Ringo Jukes Creative Printing Company. Jukes’ memories of his dad’s business are vivid.

“This was ‘Mad Men’ time,” Jukes said. “They did all this art by hand and it was gorgeous. [In his company] there were ink pens, rulers, X-Acto knives and paper everywhere. The men would sit in there, smoke cigarettes, draw pictures and drink.”

Ringo Jukes, Michael’s father, died of cancer when he was 42.

It was 1972 when Jukes couldn’t take anymore “redneck aggression” at Northeast High and dropped out before graduating.

“When I was there, my hair was a little bit over my ears,” Jukes said. “In P.E. the teacher said, pointing at me, ‘Fellas, we got a girl over here.’ High school was sheer hell. I’m still not over it.”

Like many others, Jukes could see his own rebel reflection in rock music of that time.

“The Beatles were the coolest,” Jukes said. “I want to do that. That looks like fun.”

His first band was The Riffs, which Jukes says was formed in Fayetteville, but didn’t have a name until the group found itself living in Little Rock.

“I wrote all the songs and they’d play the parts I wrote with no ego clashing,” Jukes said. “Plus, we were twenty-somethings and our spirits hadn’t been crushed yet.”

The Riffs played the Oyster Bar, Pizza D’Action and John Barleycorn’s out in the then-wilds of West Little Rock.

Like so many other acts, The Riffs fell apart, but Jukes couldn’t and wouldn’t stop making music. So Jukes hit the road to see if somebody in a position of power would give him a chance to make a record and reach an audience outside of Little Rock.

“I went to Dallas trying to sell myself,” Jukes said. “I moved to Brooklyn. I signed up with ASCAP in 1994. I went to recording studios and nothing came of it. I remember I met a woman at a record label. I played her a song of mine. After she listened to it, she said ‘No.’ ”

Jukes walked through this part of his life with a voice that is more resigned than angry.

“It takes a certain kind of aggressive drive to sell yourself,” Jukes said. “Chris Maxwell has the drive to go forth. I guess I didn’t.”

Is this the part where we talk about the definition of success?

True, Jukes never made it past the self-designated gatekeepers standing guard in his era. He did, however, outlast that suspect structure for making it and, thanks to our current technologies and Jukes’ own unquenchable thirst for creating, his captivating songs are available to whatever ears want to hear them. 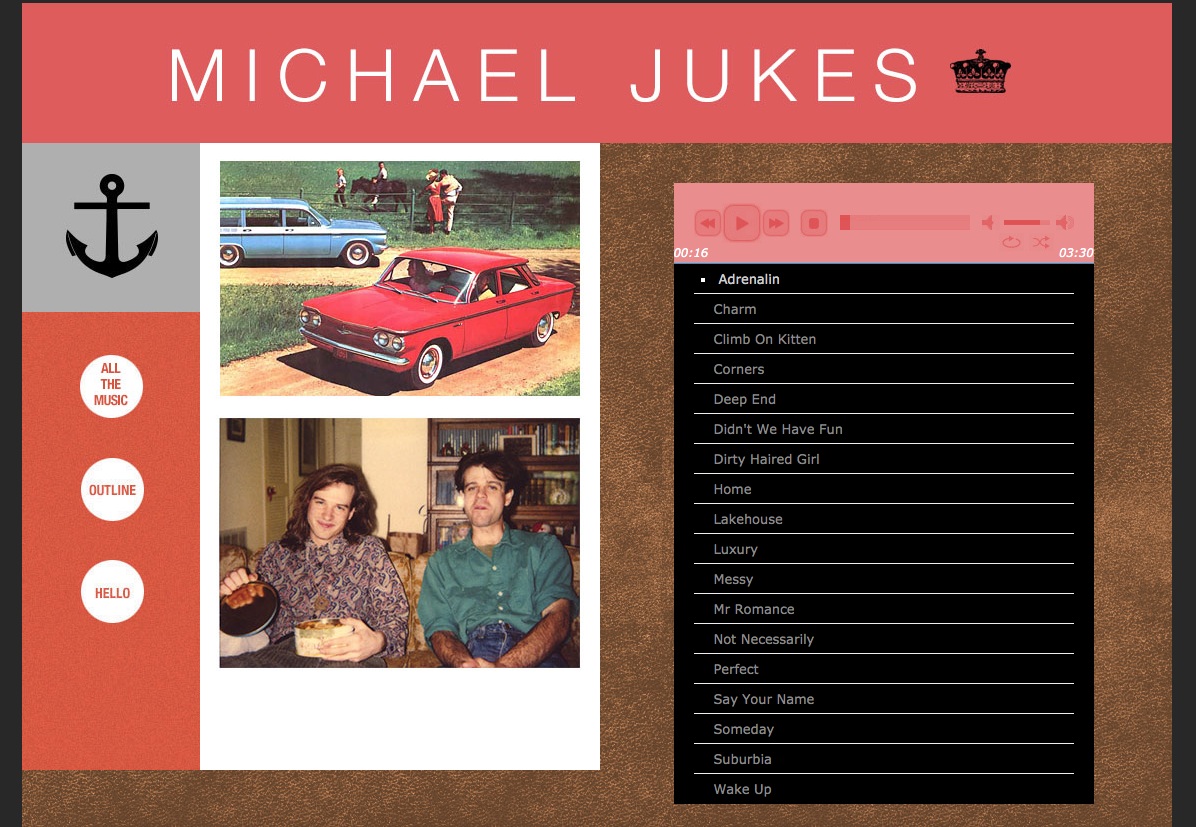 Jukes’ website, like Jukes himself, is self-effacing to a fault. There’s no bio to be found there — a couple of old pictures and an outline, which is nothing more than names of bands in a jumble on a page. The one bit of promotional copy is a warm review of Jukes’ album “Bright Room” by Little Rock music vet Jason Weinheimer.

Added to that is the unique part Jukes has played in the creative life of Little Rock in the last 40 years. He is Zelig-like in that you can study the history and suddenly there he is. Type “Michael Jukes” into a Spotify search engine and a single song appears: “Chase” which is on the 2007 “Towncraft (Notes from a Local Scene)” album alongside much younger acts Econochrist, Chino Horde and Bloodless Cooties and many more.

He was a member of his brother David’s beloved band, Magic Cropdusters.

“The Ho-Hum guys played with him,” Michael said. “I helped on the songs. I remember being in Barry Poynter’s studio, I think it was. Jim Dickinson, you know, had recorded The Replacements and all these other people. He was the producer. He sat on the couch and smoked weed. ‘You can overdub that bass,’ he told me. He did some handclaps on that Sinatra cover [the band did]. Yeah, I remember that. That was fun.”

Then there’s Jukes ties to Spectrum, an alternative newspaper that published out of the Mexican-food-smelling office above Juanita’s on Main Street from 1985 to 1993. In 1990, Jukes’ comic “Flying Snake,” a whimsical slice of absurdity that featured the nonadventures of the title character, appeared.

“It was a weekly comic strip that I brought down there every week,” Jukes said.

“Flying Snake” continued on when Spectrum morphed into The Little Rock Free Press until that paper stopped publishing in print. In the last few years Jukes has put together a couple of books of collected Flying Snake comics: “No I’m Not He Is: Flying Snake & Oyyo Volume 1” and “Hallelujah! Flying Snake and Oyyo Volume 2” — and put them out on Amazon. 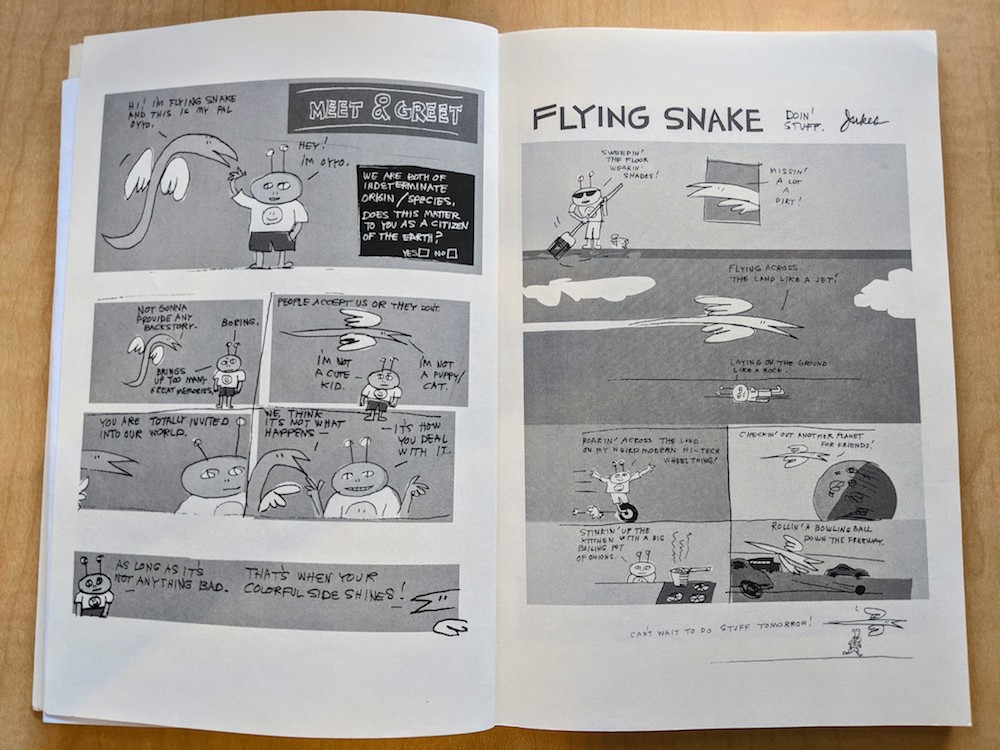 “Jukes Comic Book One” has the same dry approach to humor as “Flying Snake” with a completely different set of characters like Mr. Bossman, Guys on the Corner and Niles the Nihilist. The work recalls the alternative newspaper comics of yore. It’d fit right in with Linda Barry’s “Ernie Pook’s Comeek” or even Matt Groening’s “Life in Hell.” Jukes’ bright, infectious spirit holds sway, just as it does in the songs he continues to make.

“I can’t stop,” Jukes said in a matter-of-fact manner. “My favorite thing to do is create something I pull from my head and then share it.”

Will 2021 end up being disastrous enough to warrant fabricating alternate universes over? Time will tell. However it pans out, we’re glad the universe we’re in is one with a Michael Jukes in it.