Live theatre returns to Arkansas this month, and while there’s not a full contingent of performances in the offing, it is a start. Here’s how a few of the city’s theatre companies are tackling a virus that’s turned their worlds upside down.

Downtown Little Rock’s Studio Theatre currently has tickets on sale for live performances of John Robert Brown’s musical, “Songs for A New World.” The performance run begins May 13 and ends May 23, with shows running Thursday to Sunday.

“We have actually been easing audiences into live performances since January with short runs with limited seating,” said Studio Theatre artistic director Justin A. Pike. “’Songs for A New World’ will be our first completely in-person show. Since we already had small live audiences following safety protocols and the vaccine was rolling out quickly, we felt comfortable showing larger numbers of people back in the building with safety protocols in place.”

The show is going on, but an audience at full capacity is not yet in the cards. The theater is operating at 70 percent capacity, all audience members are required to wear masks and the public areas are cleaned with an antiviral fogging agent.

Pike is allowing himself to feel at least somewhat hopeful about what is ahead.

“I feel really good about it,” says Pike. “For the first time in 14 months, I feel comfortable being optimistic.” 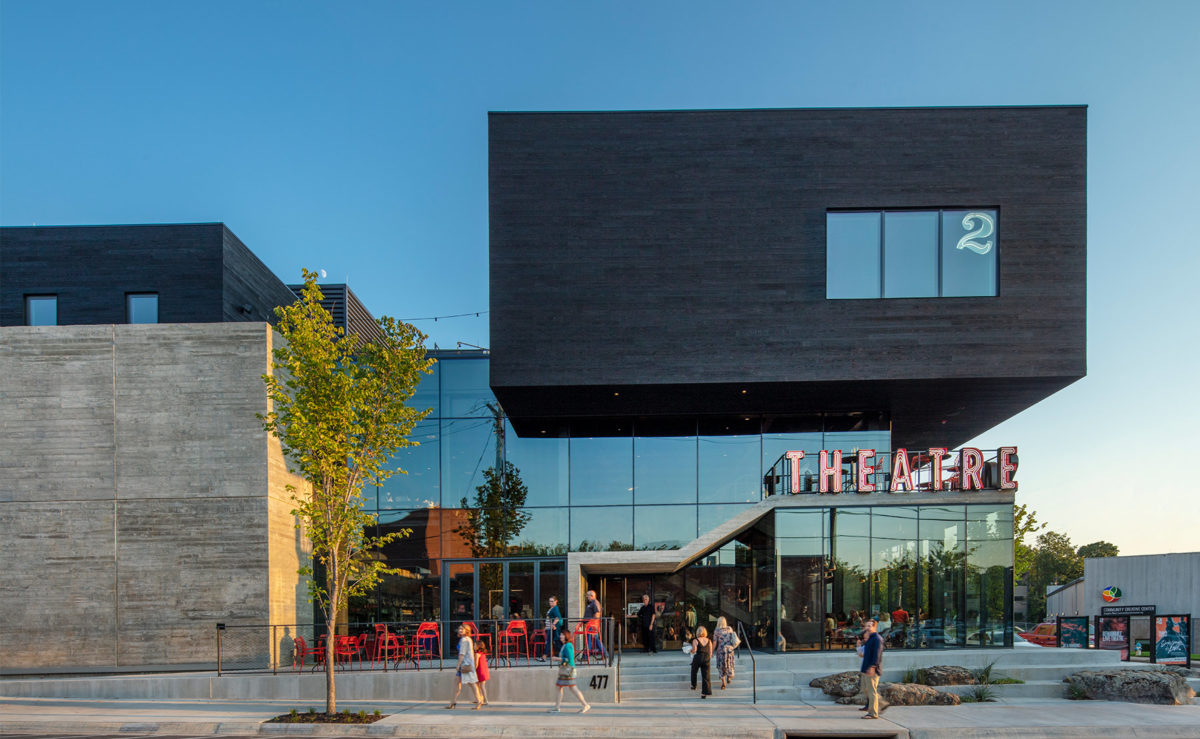 Theatresquared is nothing if not ambitious. May sees Fayetteville’s dynamic company taking on theatre on two different fronts: a streaming show (“Murder for Two”) and, for the first time since the pandemic, a live run for live audiences, in this case, a new comedy titled “At the Wedding.”

The director of “At the Wedding” is Kiera Fromm, who has over the years traveled from her home base in Chicago to Theatresquared to work on various projects.

“ ‘At the Wedding’ is my first directing project for a live audience since February 2020,” said Fromm. “Just before coming out to Fayetteville, I did a film capture of a play I directed where I was live and in person working with actors in a theater space, but that was a straight to streaming film project with no live audience.”

As infection rates decreased in Arkansas, Fromm and Theatresquared felt better about getting their show on a real and not virtual stage.

“It was a combination of gauging the COVID infection rates (nationally and in the area) and a lot of hope and optimism,” Fromm said. “Also, I’d been in touch with the folks at TheatreSquared continually about our plans should the COVID situation worsen. We fully planned on switching to a streaming only plan if public gatherings became unadvised.”

Theatresquared notes in a release that the company has worked with an infectious disease specialist in opening back up to the public. The theatre has been given approval on their health protocols by the Actors’ Equity Association. Seating for “At the Wedding” and future live shows will be limited and Theatresquared makes a point of how its “air changes more than six times per hour, which exceeds national standards.”

Fromm said Chicago is not in the same place as Arkansas when it comes to dealing with the virus.

“There is not live theater in Chicago just yet,” Fromm said. “Since Chicago is such a huge city, it’s more difficult to create safe, small pods for a group of artists to work in. Both Steppenwolf and the Goodman Theatres (two of the biggest regional theatres in town) have announced they will welcome live audiences in the fall. I suspect November will mark our return to live audiences.”

“At the Wedding” continues at Theatresquared through June 13. Tickets and more information can be found at theatre2.org.

Murry’s Dinner Playhouse is still on the sidelines and, according to owner Ike Murry McEntire, it looks like “end of July, August is our timeframe for getting back.”

“We’re following the CDC guidelines,” McEntire said. “We’re giving our employees time to get vaccinated. Murry’s is such a tight spot. Our green room is tight. It’s a small space.”

It would be easy to argue that Murry’s, a professional, year-round, for-profit theatre, has been hit the hardest of all by the shuttering of performance venues.

When Murry’s does welcome back audiences, they can expect changes.

“In the short run, we’ll probably reduce seating,” McEntire said. “Our meal will be plated instead of the buffet probably at first. As things change, we’ll change. We’re not gonna come out and do a big show right off the bat. All the shows that got delayed in 2020, at some point we’ll do those shows.”

Finally, the Arkansas Repertory Theatre has announced a lineup of outdoor programs this year, with a performance at War Memorial Park of “Marie & Rosetta,” playwright George Brant’s 2017 play about Cotton Plant, Ark., native and gospel/rock icon Sister Rosetta Tharpe and her relationship with contralto Marie Knight; a performance at the Little Rock Zoo of Jennifer Vanderbes’ “Primating”; and a concert staging of beloved 1960 musical “The Fantasticks,” free to the public and held at Murray Park Sunday, Oct. 3.