Raye Jean Jordan Montague was many things during her lifetime. She was an engineer with the U.S. Navy during a time before those doors began opening for women. She was an education advocate and a mentor. She was, her son tells us, a loving mother, a caring daughter, and completely devoted to her family. She also happened to be born Black during the Jim Crow era in Little Rock, a position that meant she had to fight for education and career opportunities that segregation denied her.

Raye Montague’s son, UA Little Rock’s Executive Director of Online Learning and Faculty Mentoring David Montague, co-authored a 2021 book celebrating his late mother’s life and achievements: “Overnight Code: The Life of Raye Montague, the Woman Who Revolutionized Naval Engineering.” Written in conjunction with writer and journalist Paige Bowers, the book explores Raye Montague’s life and steadfast determination, while its dedication invites readers to do the same: “For anyone who needs to turn their obstacle into a challenging situation.”

Born Raye Jordan in Little Rock on Jan. 21, 1935, she lived with her family in the East Ninth corridor – then a thriving, vibrant Black community. Her parents had run a successful restaurant in Pine Bluff in the ‘20s before she came along, but the backdrop of the historic Mississippi River Flood of 1927 and the economic depression of the ‘30s meant monetary success was elusive – especially for a Black family in the Jim Crow South.

An only child, she watched as her parents’ marriage became turbulent and eventually dissolved. Her mother, Flossie Jordan, took the lead of the household from there. Flossie Jordan enrolled in cosmetology school, relying on her sisters and neighbors to keep an eye on her daughter. “My mother grew up around a lot of strong women and they dealt with racism and sexism,” David Montague said. “[She] grew up learning that that was not acceptable.”

“It’s remarkable parenting that [Flossie Jordan] was able to raise [Raye Montague] with this sense that the sky was the limit at a time when people were always trying to block the sky,” Bowers added.

When she was seven, Raye Montague’s grandfather took her to tour a Japanese HA-19 submarine, captured from Pearl Harbor a few years earlier. As soon as she looked through the periscope, the book says, she knew she had found her calling. She asked the white man on duty at the submarine how you got a job working on a boat like that one. He told her she wouldn’t “ever have to worry about that.”

Luckily for Raye Montague, her mother believed in a strong education. She took her to the library so they could look up what an engineer did for a living. “My grandmother let her know right away,” David Montague told us, that “this is what you have to do, and this is the way you have to be prepared to deal with struggles that are going to come your way. That’s a tough message to give to a child.”

Later on, when mother and daughter moved to Pine Bluff, Flossie Jordan went to bat with Merrill High School over unavailable course options. “A large part of what my grandma did was not just building self-esteem – but also showing her to find ways to use that positive self-esteem,” her grandson recalled.

Until the 2017 release of the movie “Hidden Figures” – a film that highlighted the story of three Black women who were crucial in launching NASA’s John Glenn to space in 1962 — Raye Montague’s accomplishments weren’t widely known. The U.S. Navy has since dubbed her their real-life “hidden figure.”

“[Raye Montague] had this triple whammy of being a Black female and educated in a segregated school,” Bowers noted. She attended Arkansas AM&N (now the University of Arkansas at Pine Bluff), and although she wanted to study engineering, she graduated with a business degree because no Arkansas colleges were awarding such degrees to Black women in the 1950s. 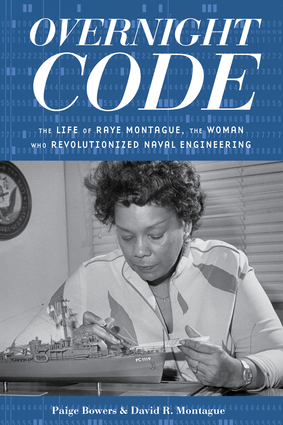 Raye Montague left Arkansas for Washington, D.C., in 1956 – missing the Central High desegregation crisis by a year. She bluffed her way into a job at the old David Taylor Model Basin (now the Naval Surface Warfare Center) by claiming that she knew computers.

And over the next three decades, she made good on that claim, becoming the U.S. Navy’s first female program manager of ships and the creator of the first computer-generated rough draft of a U.S. naval ship. Previous drafted ship designs had taken  two years or more to develop; Raye Montague completed the process in fewer than 19 hours.

Raye Montague credits her mother’s tenacity for her success. “Her advice served me well in life,” she says in “Overnight Code.”

Eventually, Raye Montague’s career cooled, and she moved back to Little Rock to be closer to her son.

“She was never bitter about her experience here,” David Montague said. “She just figured that was the way things were at the time – especially in the South.” Here, Raye Montague joined the American Contract Bridge League, stayed active within the Alpha Kappa Alpha sorority and became involved in LifeQuest of Arkansas – a program providing educational classes for adults in post-retirement life.

“My mom was always very comfortable with any type of person,” David Montague said. “She would go to groups that were mostly white, and people would say, ‘Why is it we don’t have more minorities come to our groups?’ And she would just tell them, ‘It’s because you drove them away. They never got comfortable and they never felt like they had a place with you.’”

Toward the end of her life, Raye Montague agreed to help write a book about her experiences, though it didn’t get published until after her death in 2018. Her son promised her then that he would make sure the book was finished. David Montague said his mother was delighted that people were interested in her life’s work, but she was more excited about an opportunity to direct the conversation toward justice.“ She was sending a civil rights message to people who lived through segregation, saying that they have a responsibility to fix those barriers that exist. It’s not on people who were ostracized to fix it,” David Montague said.

“You don’t have to be an engineer to read this book – it will lift you up and give you some wisdom for life. She passed away but passed the baton to her son David, and he is as committed to service and inspiring others as she was in her time,” Bowers said.