Seventeen months after it closed its doors because of the pandemic, the White Water Tavern is preparing to reopen with new ownership and a slightly modified crew. Last Chance Records owner Travis Hill and his wife, Natalee Miller, are the new owners and — good news for White Water’s legions of fans — they view their role largely as caretakers and don’t plan to dramatically alter the beloved formula. Brent Best and Patrick Sweany are booked to play the Aug. 6 reopening of the dive — or, as music booker and former co-owner Matt White calls it, “one of the world’s great beer joints, music rooms, and funky little community centers.”

The White Water has survived three devastating fires, two at the hand of an arsonist and one the aftermath of a drunken motorcyclist’s wayward turn. It’s been a happy-hour home to Bill Clinton staffers and bikers and blue-collar workers and the occasional celebrity — and intellectuals, armchair and otherwise. Where old-school Little Rock bands like Mike “Burger” Scoggins and Sweet Magnolia once played, crowds huddled in recent years to hear Lee Bains III or Adia Victoria or Bonnie Montgomery or Glossary tear the roof off the place. Or, to sit cross-legged on the floor while Malcolm Holcombe or Eliza Gilkyson or Ramblin’ Jack Elliott shrouded the place in a solemn stillness. There is no cocktail menu, no blender, and calling anybody behind the bar a mixologist is likely to get you banned, laughed out of town or both. And yet, there it sits on Esquire magazine’s list of the “24 Best Bars in America.” Patrons, stewards and champions of the working-class bar will tell you there’s magic in the walls and in the rafters. Since its opening in 1976, it’s survived changes of the guard — from Larry “Goose” Garrison’s ownership between 1979 and 2007 to its more recent era under the ownership of White and Sean Hughes, and now, to Hill and Miller.

Through it all, it stayed just the way we like it: crusty, unpretentious, sweetly familiar. Here’s the good news: After a year and change of being shuttered, the place looks largely the same ahead of its reopening. The red canoe still hangs as a totem from the ceiling, glowing from the Christmas lights that adorn it. The jukebox still plays Kevin Kerby and R.L. Burnside. Jordan Trotter will still run the soundboard. Beloved bartender Marianne Taylor will still be around, but she’s retired, so expect to find her sitting at the bar, not behind it. White, a gifted photographer whose steady presence as co-owner and music booker has guided the tavern over the last decade and a half, will still book the bands; a decade and a half of bar work had left him feeling “incredibly stressed and burned out,” and he’s glad to share the load with people who care deeply about preserving it. Bar manager Kevin Creasy will still crack wise from behind the bar with Mike Meza, but with 10 taps this time, instead of three. 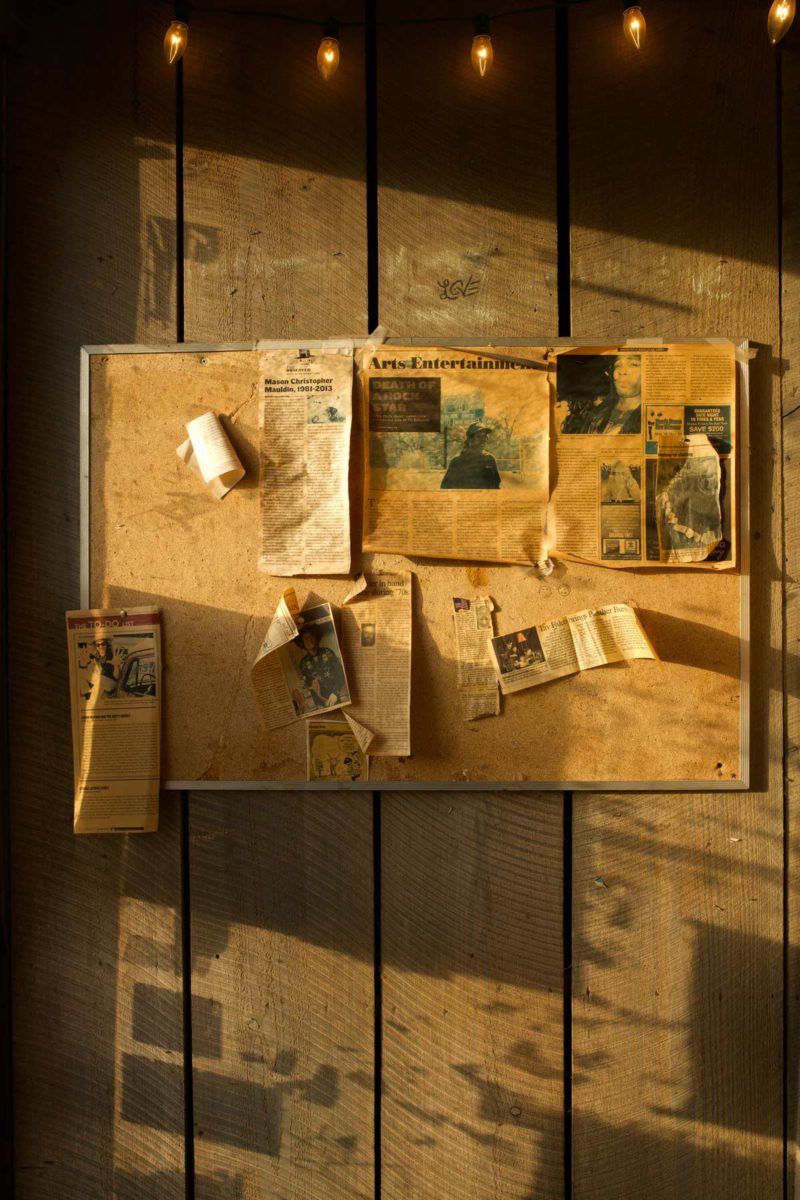 “It’s a team,” Hill said. “I work at UAMS. I can’t quit my day job and go bartend.” Hill, who works as director of the UAMS Centers for Simulation Education, has booked the wildly popular Holiday Hangout festival at White Water every December. He and Natalee had their wedding reception there. “We want to make sure the White Water’s there 30 years from now,” he said. “We’re just the custodians until it’s the next generation’s turn.”

“Folks can rest assured that the spirit of the place isn’t going anywhere,” White said. “I met Travis at the White Water on February 1, 2007, our opening night after taking the reins from Goose. Travis and Natalee have been vital components to many of our greatest shows and events for many years now. We wouldn’t have made it this far along without their friendship and care.”

Some of the chief differences: Expect the bar to be open at least every first Sunday of the month at 4 p.m., when KABF-FM 88.3 “Blues House Party” host Deb Finney will preside over a Sunday Afternoon Blues Jam. Former co-owner Sean Hughes has moved on to a position at AR-T’s/Electric Ghost, though he and his wife, Larnie, are “still part of the family,” Hill said, and Larnie will continue to run the tavern’s Saturday farmers market, which kept many locals connected to local farmers during the pandemic. The bar kitchen, which has been rented to many talented cooks over the years (Davis Clement, Lauren McCants, Nick Castleberry and Israel Rogers, to name a few), will be an in-house operation with more consistent hours than in years past, under the helm of Shane Clinton, formerly a cook at Four Quarter Bar. A large pecan tree that got struck by lightning in 2020 and loomed ominously behind the building has been removed, and sail cloth will be installed over the back patio to provide shade. A newly installed set of 1982 Klipsch Heresy speakers above the bar shelves should make those afternoon playlists sound stellar. There’s new carpet on the stage and stairs; same shade of blue, less grime. There’s less dust, too; a leaf blower to the rafters and a subsequent deep clean have rendered ages of dander gone but not forgotten. Three toilets have been replaced. There’s a new sink at the bar, and shiny new pots and pans in the kitchen. And that ice machine that seemed to issue its workmanlike rattle just as Adam Faucett was getting to the quiet part of “Living on the Moon?” It’s been replaced, and relocated to the back storage room. The powder pink sink in the women’s restroom still stands, but the stall partitions have been sealed with Kilz — a sanitation mandate, Hill said, so “Fort Sumter was an inside job” and other stallside graffiti gems will live on only in the archives of memory. “We’re definitely not trying to clean it up in a way that discourages the Sharpie,” he said. “I may put the first graffiti in the men’s room, I dunno.”

Another thing: the property’s footprint is getting bigger — and less waterlogged. Hill and Miller bought the gravel parking lot across from the bar, which was being leased by the previous ownership. They bought the two lots behind the bar, too, the ones between the bar’s dumpsters and Coates Street. Hill’s got long-term plans for using those two lots; stay tuned. “It’s really about your community and the neighborhood, and keeping the beautiful thing that the White Water is.”

White Water founder Paul Black, also a handyman, helped guide the crew with the renovations. That’s Black’s German Shepherd you see sitting in front of the ’70s-era tavern in a photo that sits above the bar — White’s all-time favorite photo of the place, when it looked “like an ancient fishing shack.”

When we visited in mid-July, the parking lot was about to be broken up and leveled for drainage purposes (adieu, stubborn potholes); the two lots on Coates were to be leveled out similarly. Aside from some stray carpet remnants and power tools, it felt pretty much like you’d wandered in on a lazy Wednesday afternoon pre-pandemic, though the bar shelves were conspicuously liquorless. Hill, wearing a T-shirt with the words “Two Cow Garage Is Not A Country Band,” scoped out the day’s construction progress after he’d punched out at UAMS, joined a few minutes later by Natalee and the couple’s 8-year-old, Connor, who is most excited about the prospect of owning a jukebox. The day after Best and Sweany play reopening night, Amy Garland Band and The Salty Dogs are booked, though the blackboard hanging on the western wall still listed the bands originally slated for the second weekend of March 2020, a time capsule of the pandemic’s onset. What happens, then, if the Delta variant puts a damper on the reopening plans? They’ll chug along until the tide turns, Hill said. “I’m too deep into the pool not to keep swimmin’.” 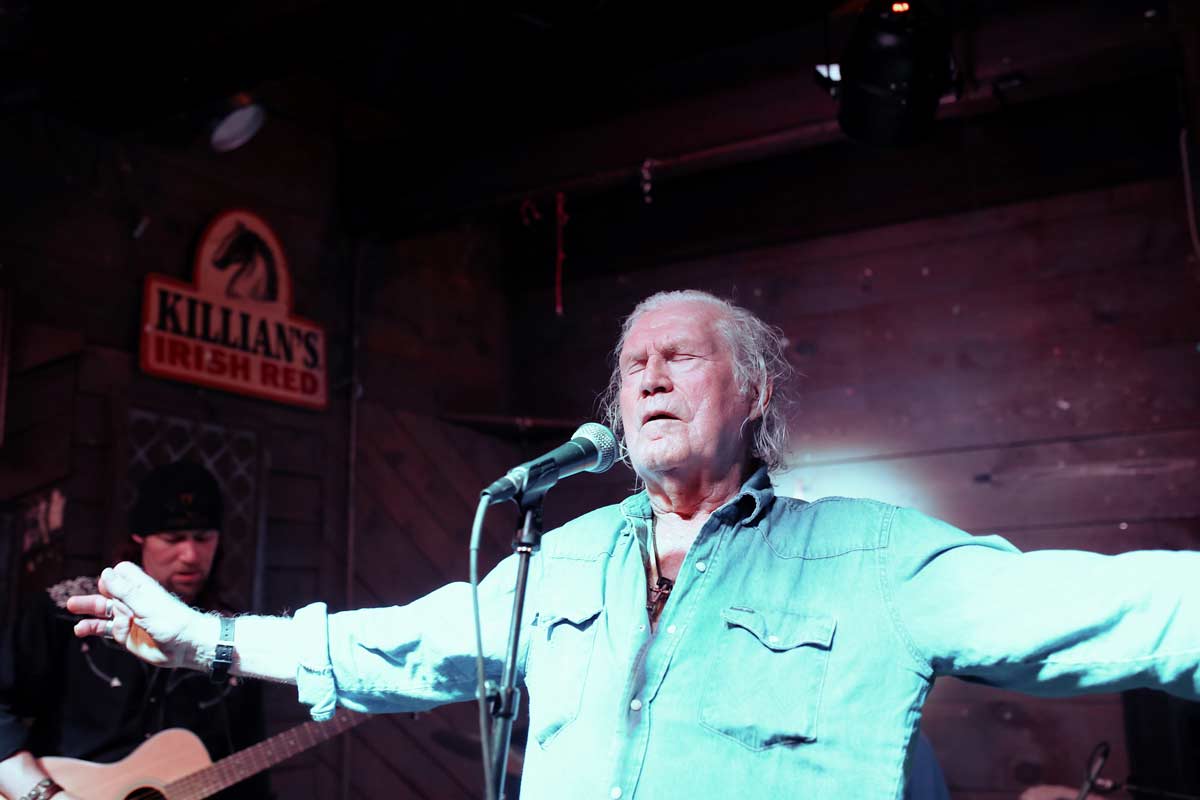 Meanwhile, behind the bar, Creasy poked fun at the “new” phone — an olive green rotary model of yore — that they’d been required to install as part of liquor license recertification. He quipped that he was “ready to hate music again,” then took a turn for the earnest, saying he thought they’d all needed the break to properly appreciate the place. “It kinda made us miss it,” he said. “I’m ready to get back to this.” Longtime regular and next door neighbor Nick Devlin even occupied his usual spot at the end of the bar, chiming in with relief that the place wasn’t going to be turned into something “ridiculous.” A sports bar, or worse. He’s played, he guesses, around 700 shows at the spot. “And that’s a conservative estimate. I don’t know why I’m even pipin’ up about that. Chimer-in-chief here. But it’s just cool that it’s gonna be open again, and that it’s gonna be what it was.”