As more and more artists — and local venues — move toward requiring proof of vaccination, make sure you have that card ready to go.

UPDATE: Isbell announced last week that he is requiring proof of vaccination at all future shows. We don’t have any communication regarding Isbell’s Arkansas date from the promoter other than “No comment at this time,” but we’ll update here when we get word. Meanwhile, here’s what Isbell tweeted earlier today:

Were it two different venues that Jason Isbell and Lucinda Williams were playing at this particular August night, they’d force a difficult decision. As it stands, you’re spared. Isbell, whose biting wit on Twitter nearly rivals that on his post-Drive-By Truckers solo album “Southeastern,” is bringing his all-star band, named the 400 Unit after a psychiatric ward in his native Alabama, to Little Rock ahead of his run at Austin City Limits. For the uninitiated, you don’t need to go deep in the catalogs to learn why he’s hailed as one of the greatest songwriters of our time; the Grammy-winning “24 Frames” or “If We Were Vampires” should do the trick. (Or, for more of a sense of the pathos that likely got him cast in Martin Scorsese’s upcoming “Killers of the Flower Moon,” see “Yvette” or “Alabama Pines.”) He’s joined by Lucinda Williams — daughter of an Arkansas poet and immutable bender of sung syllables, and someone who we should have fallen in love with the moment Mary Chapin Carpenter recorded “Passionate Kisses” in 1993, but who instead won us over slowly and irrevocably in subsequent decades. And hey, Isbell’s former bandmate Patterson Hood showed up at this tour’s Montana stop; anything can happen. Get tickets at jasonisbell.com.

Yes, you read that right, the Arkansas Repertory Theatre is staging a show at the Little Rock Zoo, and with good reason. Jennifer Vanderbes’ romantic comedy is, quite literally, monkey business, illuminating the reunion of two of the world’s leading primatologists, who also happen to be ex-lovers. Ari Edelson, a Yale University grad and decorated director who leads a prolific theater lab company called The Orchard Project, directs. The play is part of the 2021 “The Rep Outdoors” series, a bridge between the pandemic and a time when theatergoers can safely gather indoors. Get tickets at therep.org.

Hamburg, Arkansas’s own Chase Outlaw will be among the riders taking on “the world’s rankest bulls,” as a press release says, for this throwdown at Simmons Bank Arena. Outlaw (that’s his real name) shattered 30 bones in his face when a 2,000-pound bull named War Cloud trampled him in 2018, and his triumphant return to the sport — 68 metal surgical screws later — has him at the top of his game. As Outlaw told the Arkansas Times in 2019, he’s “taking it one bull at a time. … You just have to have faith in God.” Get tickets at pbrtix.com. 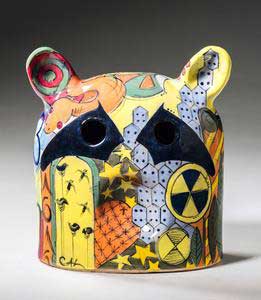 When it comes to nature and humans, we tend to think we’re the ones controlling the narrative, but then again, we’re the ones living at the mercy of our daily doses of oxygen to usher us onward to an eventual return to the soil, so who’s really in charge? Maybe the complexity of that cycle is why “Gone to Seed” makes so much sense for this exhibit, despite its verdant glow and vibrant palette. Painter Susan Chambers of Little Rock and ceramicist Aaron Calvert of Russellville turn their eyes (and their hands) to the mystery of nature in “Gone to Seed,” a dual exhibit in the Historic Arkansas Museum’s Trinity Gallery this summer. The works within portray nature not as something placid, but truly wild and, the museum’s description says, “subtly communicate our profound entanglement with the natural world, and the importance of (at least occasionally) relinquishing control and allowing things to go to seed.” Visit 9 a.m.-5 p.m. Tue.-Sat.; or 1-5 p.m. Sun.

Oh, you thought Pride Month was over? Good news: It’s here, it’s queer and it lasts all damn year. ESSE Purse Museum art director Steven Otis has curated an exhibit that is gay as hell and historical to boot, with photos of RuPaul and Candy Darling, nods to LGBTQIA+ history and a vintage beaded purse modeled by none other than Bert, the felted gay icon of “Sesame Street” that we didn’t even know we had until 2018. (But, I mean, we knew.) The exhibit, ESSE said in a release, is “lively, loving and fact filled, featuring photos and artifacts carefully curated in cases in the colors of the gay pride flag. And, of course, because ESSE is a purse museum, parts of the rainbow flag are created with purses.” Museum hours are 11 a.m.-4 p.m. Sun., Tue. and Wed.; 11 a.m.-5:30 p.m. Thu.-Sat.