The AV Arkansas website leads with the motto “citizen storytellers,” and it’s easy to feel cheered by those stories — as the site says, “multimedia documentaries exploring the people, places, and wonders of Arkansas.” A collaboration between Hendrix College students and professors Maxine Payne and Tyrone Jaeger, AV Arkansas feels like the warmest of curio shops with handcrafted objects such as the beguiling portraits of citizens of the African-American-founded town of Twin Groves. Or an audio interview with a cancer-ridden bamboo expert. Or a video interview with a farmer/animal lover who, except for the cell phone strapped to his hip, looks as if he walked out of a 15th-century painting. We talked to Payne and Jaeger about their project and the value of stories in our small, complicated state.

In your About section on the AV Arkansas website, you say, “It’s all in the story.” Don’t we have enough stories already?

Payne: We have too much noise for sure. Primarily our role in AVARK is that of teachers. I am of the opinion that one of the best lessons we have to teach young students is listening. It’s not the subjects that scream the loudest or bang pots the hardest whose stories need [to be] told.

We want Hendrix students to invest in the larger Arkansas community by way of listening intently and structuring story so that it is relevant to an audience. Stories actually do matter, and the retelling of those stories — when they are authentic and not designed to get likes on a social media platform — might actually make a difference in how we experience the world.

Jaeger: I completely agree about teaching students to listen and to carefully observe the people and places around them. And while there are plenty of stories, I think our subjects are typically Arkansans whose stories are unrepresented. 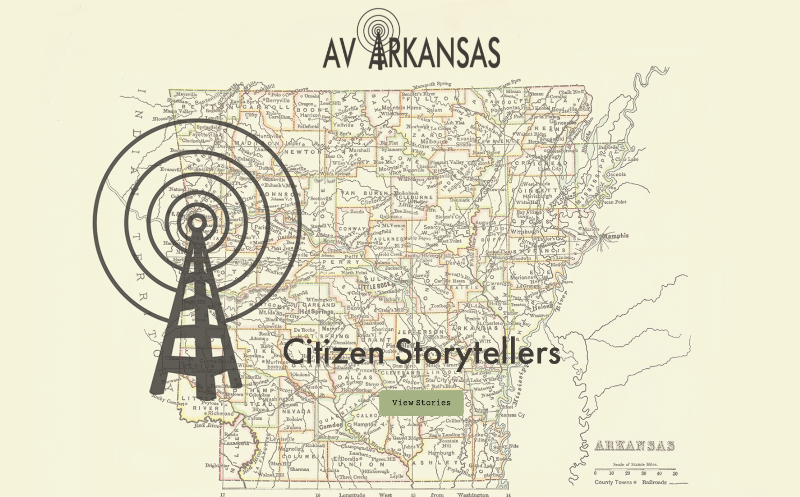 Do students arrive to this project with a well-developed sense of storytelling? Why or why not?

We do a lot of collaborative workshopping. A lot. The projects get finessed by the whole team for a long while starting in the summer, continuing into fall, until we post them in the spring. That has been the workflow so far.

Jaeger: All of us have some sense of storytelling, whether it be as storytellers or as the recipients or consumers of stories. And we all have our preferences for the kinds of stories we want to tell and hear. The students we’re working with are no exception. Each student has varying degrees of training in their coursework or in their lives, and for most of them storytelling — in one form or another — is a real passion.

The work AV Arkansas makes requires that they are first good listeners to others’ stories, but collecting the material is an early step. We then need to consider how to cull what might be many hours’ worth of interviews into something that will: first, seduce the average listener; second, keep their interest; and third, leaving them with something to ponder. Interviewing is hard work — and certainly it takes a special talent to conduct interviews — but the messy work is framing and structuring the story in a way that satisfies (and hopefully thrills!) the subject and the listener/viewer. As Maxine says, our crew spends a lot of time workshopping. The success of a story depends on smart editing and revision, which means coming back to the story again and again, and interrogating what makes it tick and how to maximize for effect.

You call this a multimedia project and stories on the site are told through photo essays, short films and audio files. Which comes first, the story or the medium you use to tell it?

Jaeger: What comes first — the story or the medium — is a great question. In my own writing life, the medium always comes first. I know I’m writing a novel, a story, flash fiction, or prose poem. With AV Arkansas, it’s been a little different, and, for better or worse, we’re somewhat of a guerrilla documentary crew, each with our own talents and specialties. When the entire crew is in the field, we’ll record audio interviews, capture video, and make photographs — all of it — and make decisions about the medium later. “Bruno, A Love Story” worked much this way. With the “Sons & Daughters of the Shop,” we envisioned making a portrait series right from the start.

Foreword to “The Sons & Daughters of the Shop”

When the students were the story leads, they typically had a clearer idea of the medium they would use. For instance, in both “The Five Stars of Lowman” and “Southern Pathology,” Julia Kraus knew that she wanted to do audio stories with accompanying photographs. We often tried to think about what media might best tell the subject’s story. Maybe another way to think of this process is that multimedia projects allow us as artists to embrace the spirit of collage and the interplay between the mediums.

Payne: For me the story always comes first, unless you are using medium as a form of necromancy, which of course photography has roots in.

In my personal work, I have a subject in mind and know going into it what I want the end product to look like. It is different working with a group of students with varying skill sets and experience. It has been a great experience to approach these projects like a magpie, collecting as much information in as many formats as possible, and then collaborating with the team to figure out what needs culling and what has to stay, and then the best way/mode to represent the subject.

The photos in the “Sons and Daughters of the Shop” are so much fun, so evocative. Can you talk about getting those photos?

Jaeger: When we started the Twin Groves story, “The Sons & Daughters of the Shop,” I thought we were going to be making a story about stone mason Silas Owens Sr., who was born and raised in what was then Solomon Grove. But when I first talked to Albessie Thompson, the project director of the Ozark Foothills African American History Museum, everything changed. Albessie shared with me the fascinating history of Twin Groves, a community founded by formerly enslaved people from the Carolinas and Tennessee, and how the museum’s mission was to document that history. We saw an opportunity for AV Arkansas to assist Albessie by documenting the current and former residents of Twin Groves — that is, we could document the current moment. Albessie and Mayor Wesley Tyus got word out that we were doing the project, and my phone was ringing off the hook for a week as people scheduled times to get their portraits made at the Twin Groves Public Library (the Solomon Grove Smith-Hughes building constructed by Owens). We encouraged them to bring an object that they might be photographed with just as a way to make the portraits more active. It was such a pleasure to get to meet all the folks from Twin Groves and to hear them talk about their objects — mostly family pictures — and their connection to and love of the township.

Payne: I guess one thing I could add to this is that we have worked hard with the students to make sure they are making photographs and not taking photographs. (this applies to all media we are using). So, with the Twin Groves portraits, we collaborated with the subjects as Ty said, and spent a lot of time with the students emphasizing and modeling respectful interactions with our subjects. The students come to know that access to [a] subject is a gift and a genuine interaction with [a] subject is more important than a product. We can’t really get what we are looking for without that.

I won’t ask which of the stories up on the site are your favorite, but maybe you can tell me some of your favorite moments in the work you have there.

Jaeger: There were special moments working on each of these stories. Walking the grounds of the Bruno School with Royce Jones and listening to him tell stories about his deceased wife, the artist Helen Phillips Royce. Royce was moving soon, and there was this sense that he was leaving so much behind, even as he looked forward to the next stage of his life.

As a writer, most of my favorite moments came as we discovered the shape of each story. In “Bear This in Mind,” we worked hard to reach a place where we could tell both the stories about the farm animals and about the supernatural. Finding how those elements were in conversation became the key. One of the gratifying aspects of doing this kind of work is that each of the subjects begins as a stranger but then you discover so much about them in a short period of time. Of course, what we come to know is only a small slice of the person’s life — it’s artifice really — but from this you shape something that feels more complete in scope.

“The Five Instars of Lowman” was another fun story to work on and discover the structure. Larry Lowman is such a good storyteller — he’s so knowledgeable about Arkansas flora and geography, and he shares such vividly detailed anecdotes, whether about Arkansas politics or his love of insects. We had so much great tape that we didn’t know how to cut it down. Dividing the story into five parts allowed us to create bite size stories that people could listen to without feeling like they were committing themselves to twenty-five minutes of listening. We were convinced (rightly, I hope!) that if we could get people to listen to the first three minutes, we could get them to listen to five sections. But again, it became a question of how to shape those pieces to give the overall story a sense of shape. How to balance and interview the personal stories with the educational or more didactic information? How do we show these two elements of Larry Lowman — the charismatic personality and the sage teacher? Hopefully, the story shows these strata of Larry’s persona.

Payne: Helen Phillips was my mentor in undergrad and I had been up to their place in Bruno a few times, even before they purchased the property, and had a rental up on the creek. That project had a lot of sentimental appeal to me so I had to pull back a little to be sure I wasn’t being too emotional about the direction it needed to go. In the end, I think the team did a beautiful job making a piece about a place and, ultimately, a love story.