feature comes from our sister publication Arkansas Made, on newsstands soon and at arkansas-made.com.

With their powers combined, Tom Maringer and family summon tokens from fantasy worlds into the realm of reality with their business, Shire Post Mint, traditionally crafted coins.

Bill the pony, the oft-overlooked but steadfast member of the Fellowship of the Ring in J.R.R. Tolkien’s classic novel “The Lord of the Rings,” joined Frodo Baggins and friends when they bought him for 12 silver pennies before setting out on their adventure. This deep cut of Tolkien trivia is the only reference to coins in the entire series, but it planted a seed that eventually bloomed into the Springdale business that crafts coins from beloved fantasy works, such as “The Lord of the Rings” and “A Song of Ice and Fire,” using traditional engraving and pressing techniques.

Helen Maringer, CEO of Shire Post Mint and Tom Maringer’s daughter, said her father’s lifelong interests of coin collecting, metalworking and fantasy fiction collided in a chance encounter with an antique coin press. The 12 pennies from Tolkien had been rolling around in his head for years. They sparked his curiosity — what would a penny from the Shire look and feel like? What would it say? By the time he came across the coin press for sale, he was already an accomplished knife and sword craftsman. Here was an opportunity to answer his long-dormant questions by making his own Shire penny.

After several failed attempts, Tom Maringer successfully wrought his Shire penny. “It said ‘The Shire’ in English and it had a little tree,” Helen Maringer said. Tom Maringer’s Shire penny is still framed in the Shire Post Mint office today. His vision hadn’t extended beyond bringing this figment of his youthful imagination to life, but the plot thickened when he posted his creation online and the penny caught the eye of George R.R. Martin, creator author of “A Song of Ice and Fire,” the source material for HBO’s runaway hit show “Game of Thrones.” 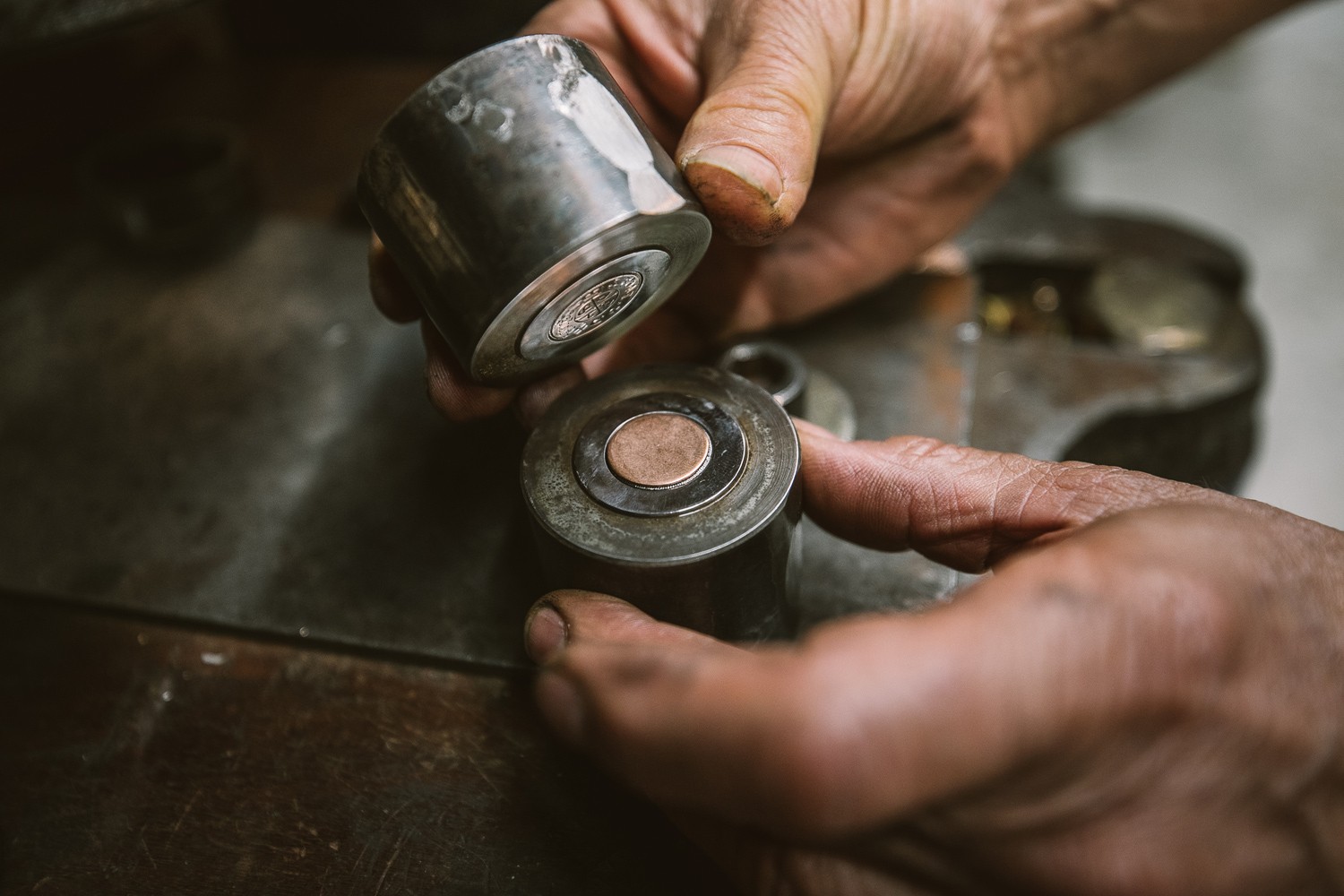 Martin was so impressed with the coin that he wanted Tom Maringer to bring coins from “A Song of Ice and Fire” to life. He granted the license to the , and Shire Post Mint was born. Key to the fledgling mint’s survival was Martin’s loyalty when confronted by HBO on the licensing rights. In an interview with John Picacio recorded at the World Science Fiction Convention in San Jose, Calif., in 2018, Martin recalled the kerfuffle over the licensing rights. “That almost killed the TV deal,” he said. Despite the pressure from HBO, Martin stuck to Shire Post Mint and other subsidiary rights holders. “I’m really honored that we can work with some really amazing authors who are just amazing as people,” Helen Maringer said.

The magic of coins from Shire Post Mint comes from the forces of love of the subject matter and the use of traditional techniques that give each coin an authentic character. Deep historical knowledge combined with careful consideration of how each design might have actually been made in the fantasy world of its origin lend verisimilitude to the coins of Shire Post Mint. The world-building of the fantasy creators is respected and carried through the whole process, from design to press to a tumbling process intended to give the coins a worn look, as though they had been stealthily pilfered straight from a dragon’s ancient hoard.

“Another really early coin for ‘Game of Thrones’ was the Torrhen Stark penny, and it’s engraved in the same way that Viking pennies were,” Helen Maringer said. “So you have a bar and you have a circle, and you just make the design out of those two elements. It looks really authentic and it feels really different. And some of them are in a way where the edge is scalloped. You’re used to coins feeling smooth along the edge and even having that flat rim, but we don’t strike coins in a way that creates that because it’s not how it used to be done.”

In addition to working closely with the creators of their licensed coins’ origins, Helen Maringer places value on input from fans. “Our best designs — our best-selling things — have been suggestions from customers. We love every piece of info we can get,” she said. One top request was a coin featuring an ancient Icelandic symbol called the Vegvísir, a talisman against getting lost. “We did this really nice incuse [stamped] design,” she said. “Instead of going out of the metal, the design goes into the metal so it gets really dark and it wears really nicely. There’s this phrase; it’s in Icelandic and then transcribed in runes, so even if you know runes you have to know Icelandic also to read it. But it says, ‘I do not stop when I am tired, I stop when I am done.’ People have been asking for it for a long time.”

Enthusiasts were also eager to see Shire Post Mint create a memento mori coin. Helen and company obliged and added their own spin to the classic idea. “Memento mori is this ancient and medieval philosophy about not being connected to your earthly possessions and your body. It’s Latin for ‘remember that you have to die.’ So we added a flip side, ‘remember that you have to live,’ memento .” The memento mori coin is more complicated than most of their other coins because of its octagonal shape and complex design elements, so it’s a little pricier than other single coins. But Helen says the extra effort is worth it. “There’s a lot of work that goes into that one, but dang, it looks good. I think people feel the value of it.”

The thought and care that goes into the craftsmanship of each coin undoubtedly in part from the deeply personal nature of a family business. After the HBO release of “Game of Thrones,” the business skyrocketed, growing until it employed most of the Maringer family. 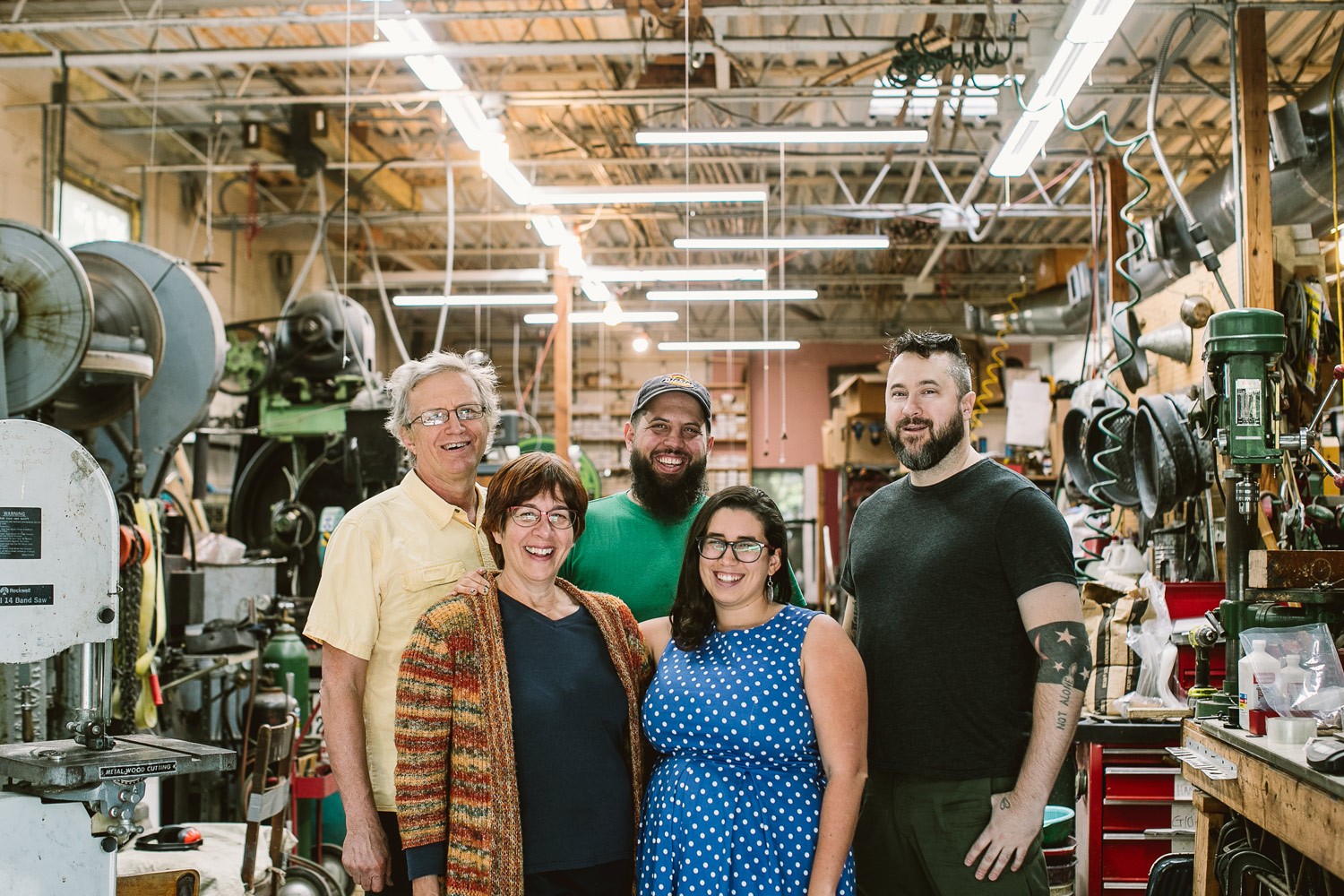 Of course, working with family brings unique challenges as well. “You are so connected to this that when you fail, it’s a really big emotional blow. That’s definitely been hard for me to wrestle with,” Helen Maringer said. “Because of how much this company has changed all of our lives. It definitely changed my life. You know, George R.R. Martin allowing my dad to make ‘A Game of Thrones’ coins back in 2003 helped me go to college. So, I feel like I have a huge personal stake in helping this business succeed. Figuring out how to take the failures well in a family business is difficult, but doable.”

But with more and more creators approaching Shire Post Mint to make tokens based on their work, and big retailers like Barnes & Noble starting to carry its products, the future is looking bright as a silver Shire penny for this coining operation. Shire Post Mint launched a Kickstarter fundraising campaign Oct. 2, 2018, for “Pre-Conquest Coins of Westeros,” a set of coins based on the ancient history of George R.R. Martin’s “A Song of Ice and Fire” world. Depending on how much backers contributed, they were rewarded with perks ranging from a single coin to the whole set of 11 coins framed with a map of Westeros signed by George R.R. Martin himself. The campaign reached its goal in just four hours, raising more than $43,000 from 347 backers.

“Being able to know that the work I’m doing — it’s not going to some CEO who has no stake in my or some company who’s just going to spend it all on corporate bonuses or weird retreats — it’s going to my family,” Helen Maringer said. “And the work that I do in promoting the company — it’s sharing this thing that my family has created. And I think that’s really beautiful. That we can all work together and share all of our talents with the world.”

Coins come in a variety of metals; single coin prices range from $1.50 (the 5p nickel gaming coin) to $100 (the silver strobe spinning top, for example). Coins are sold in multiples as well. Orders may be made online at shirepost.com.