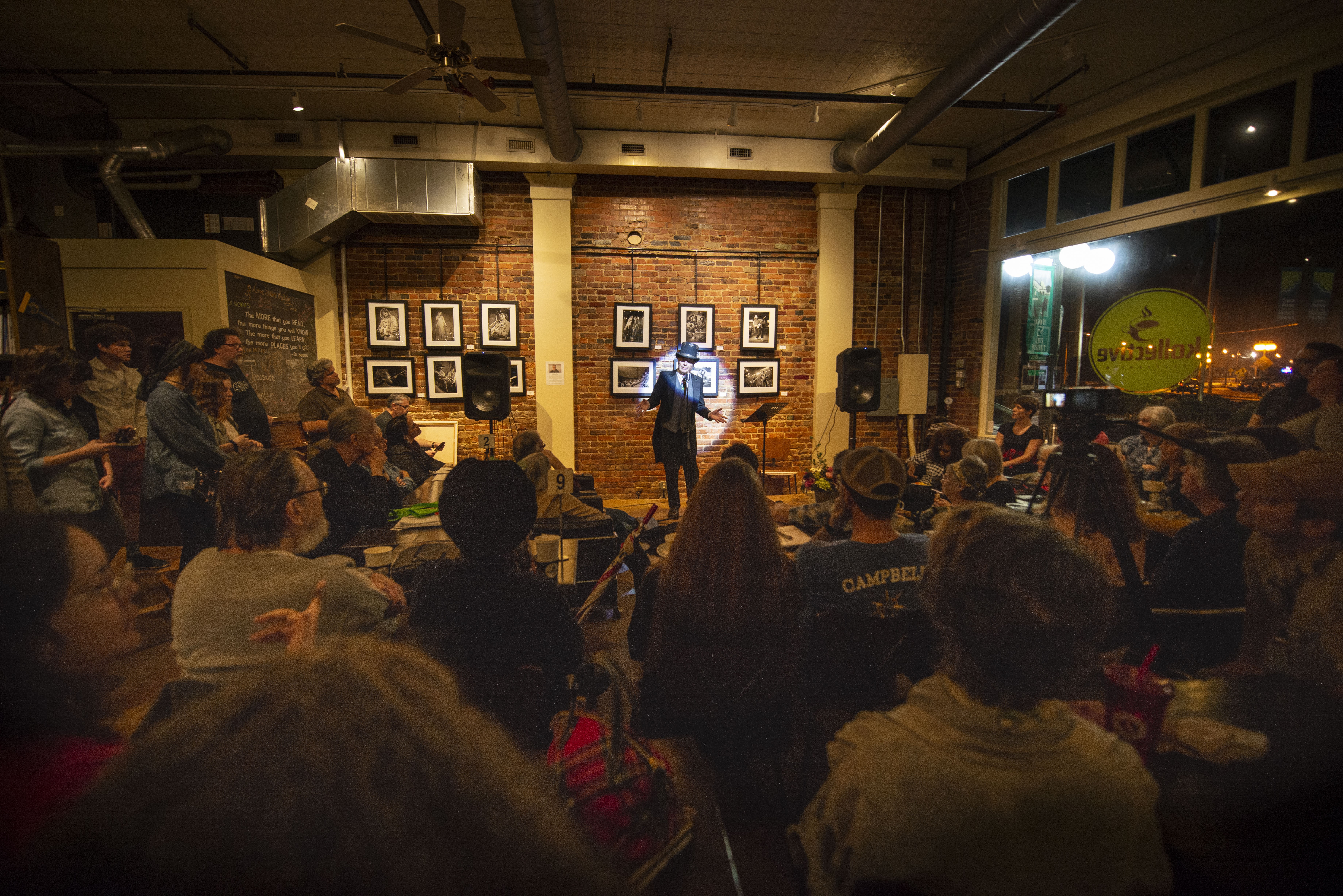 In 1989, the first worldwide web server came to be, and gas was $1.12 per gallon. The song of the year was Bobby McFerrin’s “Don’t Worry, Be Happy,” Kai Coggin reminded an audience in Hot Springs, adding that “the song still makes a whole lot of sense.” A single spotlight warmed the mic in front of the brick wall at Kollective Coffee + Tea, and in true form, an electrician, the city’s mayor, a heavy metal drummer, a sixth grader, a first time reader, former hosts and many others took turns performing their poetry aloud, reading from phones or paper or by heart as part of a community practice that’s endured for the past three decades — and continues to thrive.

Wednesday Night Poetry celebrated its 30th anniversary on Feb. 6, commemorating 1,567 consecutive Wednesdays of weekly poetry readings since it began as the first recurring art event in Hot Springs on Feb. 1, 1989. Now on its 14th venue with a total accumulated number of hosts that none of its original attendees can keep track of, the event also marked the passing of the torch to Coggin as host and recognized its longtime members and illustrious past.

Even more impressive than its longevity, WNP is an eclectic, welcoming community made up of attendees and voices from all walks of life. Attendance has waxed and waned over time, but WNP consistently draws a crowd of at least 20 and more typically 40 or 50. On its 30th birthday, the event brought in close to 100 throughout the night.

Sixteen people signed up to read at the beginning of the night and, by its close, many more had added their names to the mix. Individuals can sign up to perform any original or previously published poem, or even lyrics with live music during one of two 30 minute time slots, bookending the featured poet, Bud Kenny, the “patriarch of WNP” and host since 2015, dressed in a top hat, suit and coattails that he dons for special occasions.

At Coffee + Tea, WNP’s home of the past nearly four years, attendees listened from chairs, leaning along the back walls, countertops, high street-facing windows. Some held notebooks and pencils for sketching, glasses of wine or warm beverages, printed poems to flip through, perhaps to share. People greeted one another, buzzing with light chatter but respectfully tuned into whoever was introduced to the stage by Coggin.

The physical space is itself founded on a long tradition of listening in; Kollective’s owners, Agnes Galecka-Rogers and Kevin Rogers, have provided venues for WNP for eight years total in two locations and Kevin grew up attending WNP while he was in high school.

Once dubbed the longest-running consecutive weekly poetry reading in the United States by poetry slam founder Marc Smith, WNP has hosted nationally known poets such as Gary Snider, Rita Dove, Allen Ginsberg and Lawrence Ferlinghetti. It was also the impetus for the 1997 launch of the Arkansas Grand Slam, which for 15 years offered the world’s largest cash prize for a performance poet ($2,000, at its peak), and the Arkansas Celebration of the Arts in Poetry.

A proclamation delivered by Mayor Pat McCabe also officiated that from now on — not just in spoken word in its venues, but in writing — Feb. 6 will be deemed Wednesday Night Poetry day in Hot Springs. 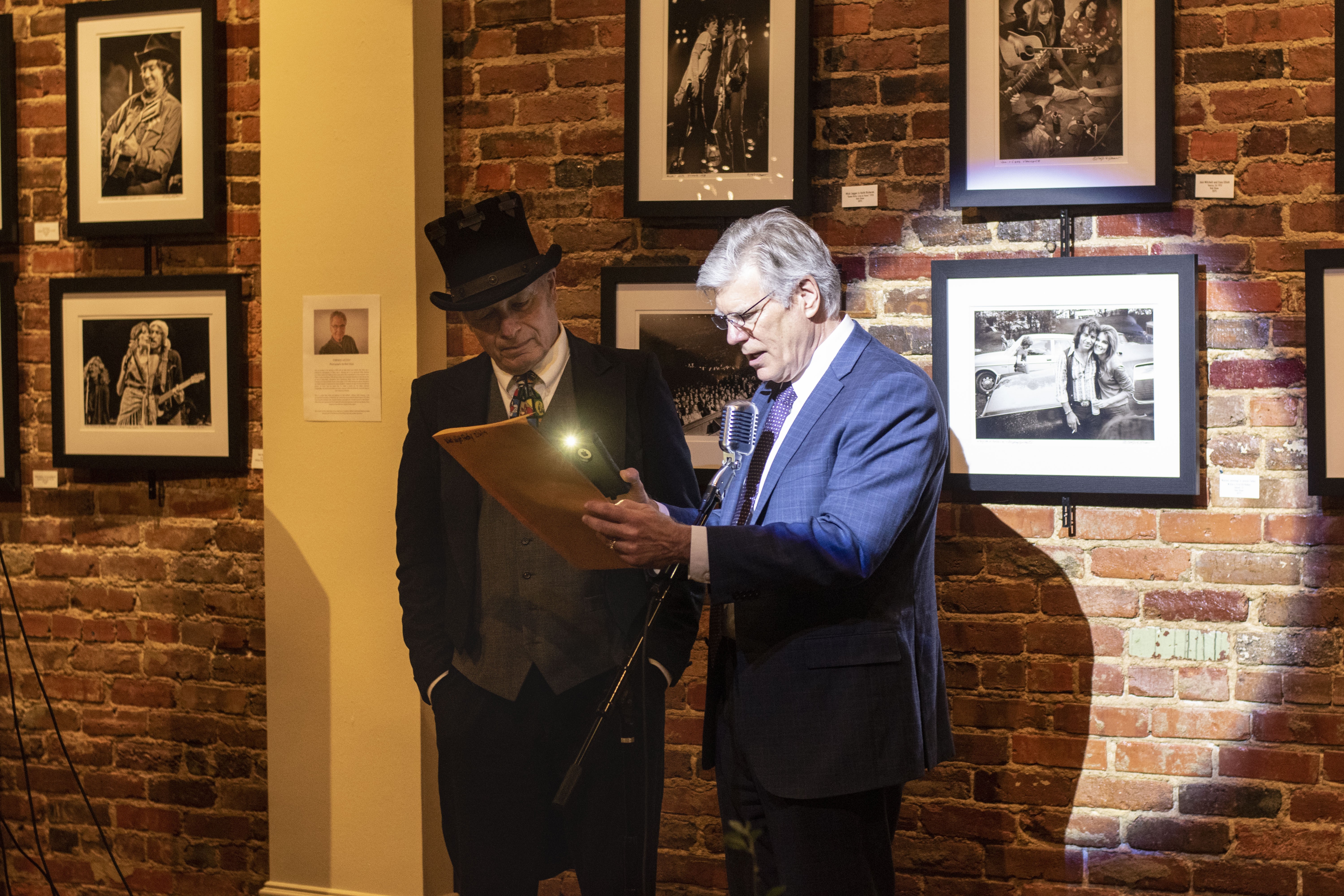 The anniversary also the life of Karen Hayes, a beloved member and poet who died just the week before. Her photo sat on the shop’s piano beside a flickering candle and many attendees shared memories or poems in celebration of her spirit. All profits from the event went to an organization close to Hayes’ heart called the Ida Lee Project, collected as per a tradition in a beaver skin top hat — at least 135 years old, Kenny said — that circulates the room for tips.

“We all just gravitate to each other and lift each other up,” Coggin said. “That’s what Karen did, too: She lifted so many people up, just by interacting and being a part of everything. That’s just what we do, that’s what our community is about.”

Originally, WNP began as a conversation over dinner in 1988 between Kenny and an artist named Benini, who had visions for a thriving art community in Hot Springs.

Kenny, who had picked up poetry while walking across the Northern states in the 1970s, it was a compelling idea but didn’t envision that it would last more than a few months. Giancarlo’s Grotto restaurant in the lower level of Spencer’s corner, now the Steinhaus Keller, was offered up as the first venue for WNP and quickly became a hit with 200 people attending its raucous first reading.

Kenny believes it’s stood the test of time because of the community effort to keep it going and the opportunity it allows people to express themselves.

“It’s one thing to pour onto a page of , but [poetry] doesn’t come to full fruition until you share it with others,” Kenny said. “People listen, and that’s what it’s all about.”

As much as word itself was a draw, former host and artist Chuck Dodson views WNP’s continuation as a product of the larger movement of the 1990s. Benini, the late Paul Tucker and his wife, Suzanne, and other Hot Springs art enthusiasts, urged creatives from across the United States and abroad to move to Hot Springs. WNP predates the ongoing Hot Springs Documentary Film Festival and Gallery Walk, all testament to the Hot Springs art scene that WNP helped fuel.

“It’s not just a fluke, and it’s not because people in Hot Springs love poetry,” Dodson said. “It’s because there was a very special scene here that kind of spawned this thing and it was a part of [the arts community] from the beginning. The roots are kind of if you know about how it all started.” Dodson, a musician, filmmaker and writer, came to poetry when he casually promised a friend at a party that he would share his work at WNP. He became uniquely captivated by poetry as an art form and eventually went on to compete with Kenny at the National Poetry Slam in Chicago in 1998. Dodson says that his four and a half years as a host were some of the most meaningful of his life.

“It’s always been a true community open mic where people can come and do anything,” Dodson said. “It’s always had that spirit of really remarkable openness and tolerance and acceptance, where anyone regardless of age, regardless of belief, can get up and have their moment at the mic.” Coggin had a similar experience when she moved to Hot Springs five years ago from Houston, where she was an acclaimed public school teacher and voted Teacher of the Year. She had consistently felt a strong pull to commit to poetry since her father’s death but says that finding WNP in 2013 and the space to share her work every week was the catalyst for her writing. Within a year of finding WNP, she had a full manuscript and has since published two books, “Periscope” (2014) and “Wingspan” (2016) and been nominated for the Pushcart Prize. Her third book of poems, “Incandescent,” is set for release on June 19 through Little Rock’s Sibling Rivalry Press.

“When I found this community, I woke up. I was like ‘OK, there’s my purpose,’ and I found my way again,” Coggin said.
With features booked until June, Coggin is planning to bring in poets of national and statewide acclaim and partner with local businesses to make WNP more of a draw for touring artists. She’s also considering creating a two-week writer’s residency for poets to feature their work and stay with a local host.

Coggin continues to share poetry with a wide range of age groups as a teaching artist of creative writing, on the Arts in Education Roster for the Arkansas Art Council and Arkansas Learning Through the Arts. She consistently holds poetry workshops in K-8 schools in and around Hot Springs and teaches an adult community creative writing class at Emergent Arts called Words & Wine. As WNP host, Coggin hopes to build upon the tradition’s intention to create an inclusive space for everyone in attendance and use her role to bring in new voices.

“It’s more of a way for me to display others and to help others shine,” Coggin said of her role. “I’ve become successful because of this community, and so I want to pull people up, I want to extend my hand back and bring people up. It’ll be stepping back and opening my arms a little bit more, and listening. I look forward to that, listening to learning.” Support of emerging voices has long been a pillar of WNP. Alana Spencer, an 11-year-old, started attending the event with her mother, Shannon Buck, when she was 7 and has kept coming because she feels comfortable and inspired by the perspectives at WNP. She first shared her work at the open mic when she was 9.

“People were very supportive which kept me going, and poetry is an easy way to let out my emotions into something that I enjoy,” Spencer said. “I feel safe while I’m reading, and I’m happy knowing that other people enjoy it or can relate to things I write. I’ve never tried to keep it a secret because I want to spread it around and encourage others they have encouraged me.” John Crawford, a former English professor at Henderson State University who was at the first reading in 1989, regularly drove from Arkadelphia with a and consistently attended WNP from the start. He says that young people’s attendance has always been an inspiring force over the years.

“That’s the heartwarming thing,” he said. “To see young people that come grow in it, continue in it and become very proficient in it.”

Of the transition, Coggin says she’s ready to usher in a new generation of and allow Kenny — whom she lovingly calls “Dad” — the time to chance to enjoy the show, sit in the crowd, and be inspired.

The 30th anniversary echoed that very sentiment of acceptance, ranging in tone from more personal stories, to narrative verse, to phrases that echoed the ocean, to a goofy lyrical poem that Kenny had performed at the national Slam, “Frog Lickin’. ” Its attendees are enthusiastic about the future and Coggin’s place at the helm and yet, much of what’s wonderful about WNP is going to stay the same.

“If you’re writing a poem, coming here and reading or sharing it, or even if you’re listening to it, there’s something about you. We’re connected,” Coggin says. “Your heart is awake even though the whole world is asleep. Your heart is awake if you can respond to if you can respond to music, dance, and you get the chills, that’s what life is all about.”