When painter Shabana Kauser’s parents — both Pakistani immigrants — upended their lives to move from Azad, Kashmir, to London in 1975, Kauser’s older sister Samina, their firstborn, was forced to stay behind, her relocation documents unapproved by the Pakistani government, which oversees Kashmir. As a result, Kauser didn’t get the chance to meet Samina until 1985, when Samina was finally granted legal status to reunite with her family in the U.K. “I had a fusion of two cultures. She had one very strong culture,” Kauser said of her sister, who wore a traditional blue dupatta [a South Asian scarf] when they first met. “I was looking at her and thinking, ‘How exciting is that?’ And that’s the kind of memory I had of my sister. And I wanted to capture that initial memory.”

Today, that memory hangs on the walls at the 21c Museum Hotel in Bentonville, in the form of a lavish, oversized portrait, joined by Kauser’s painting of the London-based Urdu teacher who taught Kauser her native tongue. Kauser’s paintings, several of which are on display in a show she calls “Journey” at Argenta Gallery through Wednesday, July 17 — emerged from a seven-year period during which Kauser was living in Arkansas thanks to her husband’s work visa in 2008, but was not allowed to work in the U.S., despite having left a thriving career in corporate IT behind her. I talked with Kauser ahead of that show.

Wow. My journey’s been crazy. If you’d said to me 15 years ago, “You’re going to move from Central London, you’re going to leave your corporate job, you’re going to move to Arkansas, and one day you’re going to start to talk about your culture through your artwork and people are going to completely embrace it and ask you tons of questions and it’s going to roll on from there,” I would have just sat there laughing for hours with tears coming down my face. It’s been a really crazy journey.

Moving to the U.S. was really unexpected. We arrived on a work visa for my husband, which meant he could legally work here, but I couldn’t do anything for seven years. So I went from a really busy, crazy exciting life in London to moving to Fayetteville, Arkansas, not being able to do anything. It was soul destroying. It really clips your wings. Through sheer boredom I discovered my passion for creating and that was a highlight about moving to the U.S.

When did you start painting? What was it like?

I hadn’t painted before I took some local classes here and I thought, this is fun. I didn’t take it too seriously because the pressure was off and I just thought just enjoy it and just learn. When I got my green card I decided to launch my art full time.

Describe your process of starting a new work.

I use my own props and models. My dupattas and jewelry are often purchased in the U.K., from small, local South Asian retailers. During my last visit, my sister and I drove to London and spent an entire day looking for bargain dupattas, fabrics and jewelry. Nothing beats seeing and touching the fabrics and jewelry in person. Then, to be able to study them up close when I add fine details to my oil paintings is crucial.

Right now, I’m working on a self-portrait. I began by selecting the dupatta I wanted. I chose a vibrant green one with gold trim. The Pakistan flag is green and white, so this particular dupatta made sense.

It’s very difficult when you look at the traditional dupattas. They’re so beautiful and have so many details. It’s very difficult for me not to show those off in my oil paintings. That’s what people are enjoying — looking at things close up and discussing it and having a discussion about culture and fabrics and jewelry and the women behind it. It opens up so much conversation with people. 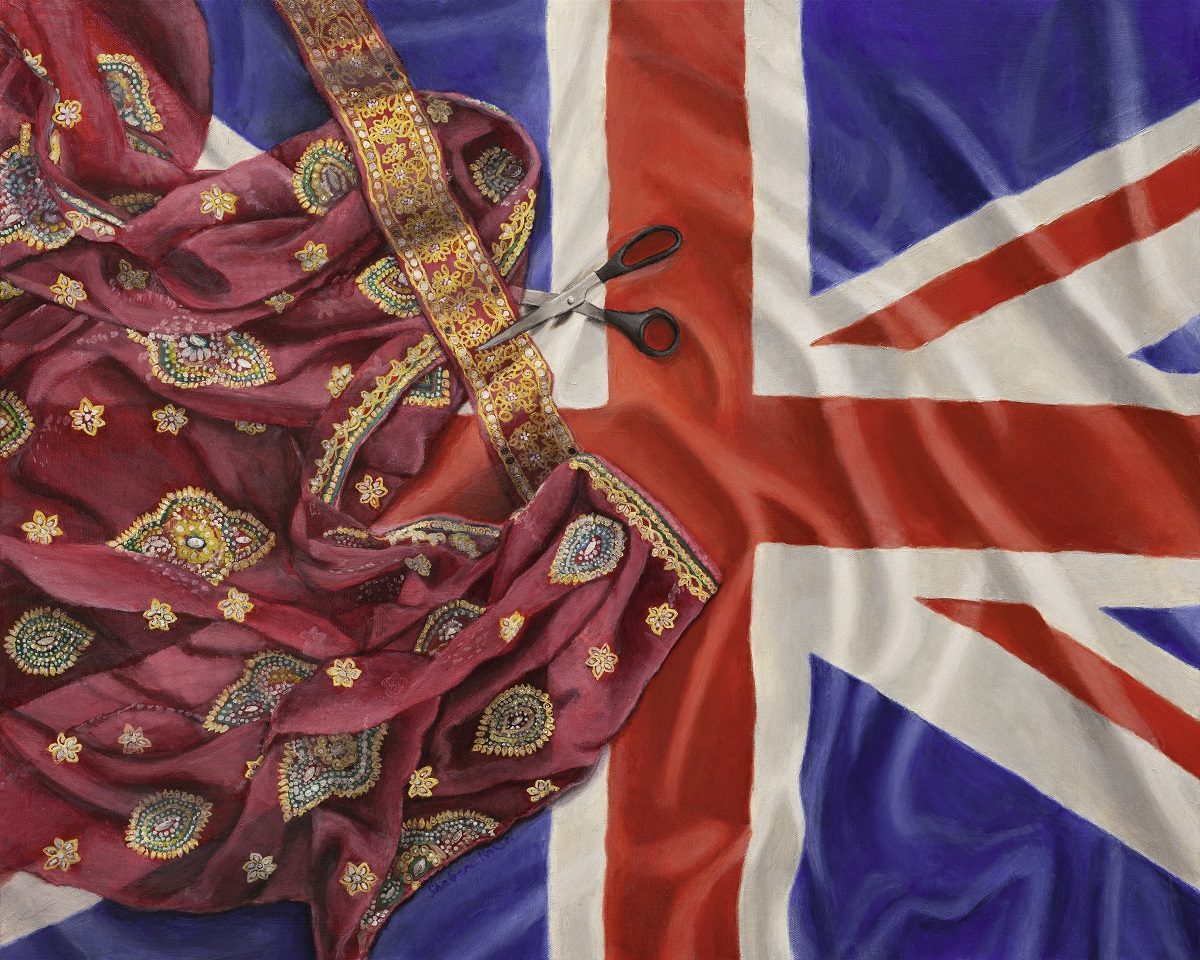 What was it like to meet your sister for the first time?

Lots of different emotions come to mind. My siblings and I spoke English amongst ourselves, but knew to speak to Urdu to our elders. It was strange to meet our sister, who was only a few years older than us, who could only communicate in Urdu. We also wore Western clothes and she was wearing traditional Pakistani clothes with a dupatta.

Despite our different upbringings, I remember bonding with her instantly. This was mainly through the exchange of language. She helped me fine-tune my Urdu written and spoken skills, and in exchange I helped her with English. We have been close ever since, not just as sisters; we are also best friends.

You were injured in a car wreck in 2018. Can you recount the accident and the rehabilitation that you’ve endured? How has that changed your artwork?

It’s crazy how something unexpected like that can change your plans so quickly! It affected my lower back and leg. Therefore, it limited my ability to move and walk. I’d have days, and at times weeks, of resting due to agonizing pain, and then going from one back specialist appointment to another with no improvement. I was determined to get better and continue with my art.

Being the daughter of Pakistani immigrants to the U.K. and an immigrant to the U.S. myself, it’s amazing how you look for ways to achieve something rather than spending too much time with the problem. My parents always had a strong work ethic and a can-do attitude, and that is what I’ve always known. The pain caused due to the car wreck just made me really focus on where I wanted to go, and what I could achieve with the limitations I was dealing with. I am proud of what I did achieve within the nine months of suffering.