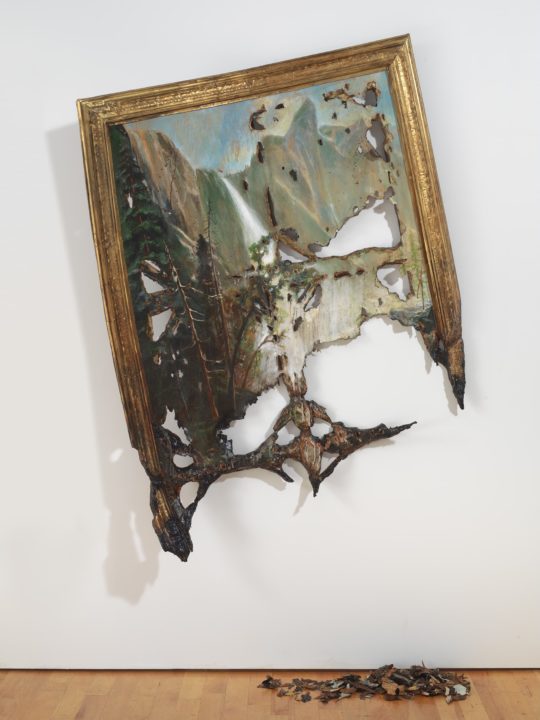 Valerie Hegarty’s melted image of Bridal Veil Falls (“Fallen Bierstadt,” 2007) that hangs next to Albert Bierstadt’s painting of the Yosemite landmark (Bridal Veil Falls, ca. 1871-73) serves as a not so abstract abstract for the message of “Nature’s Nation: American Art and the Environment,” on view at Crystal Bridges Museum of American Art. Bierstadt’s work celebrates the majesty of the American West; working in an America 150 years later, Hegarty melts her Bierstadt imitation to illustrate the environmental ills we seem to be paralyzed to address.

The 100 artworks from the 19th, 20th and 21st centuries in the exhibition, curated by the Princeton University Art Museum, serve to illustrate our attitudes toward nature — from land as holy to nature as something over which man has dominion (illustrated beautifully with John Gast’s 1872 “American Progress”). 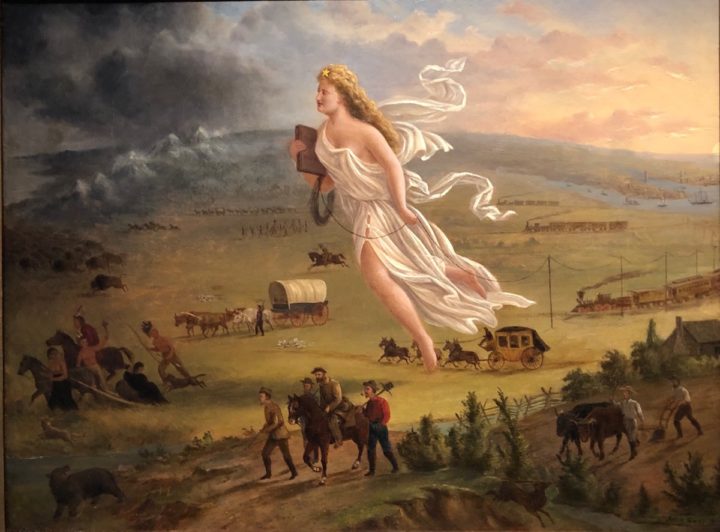 “AMERICAN PROGRESS”: An 1872 vision of man’s dominance over nature by John Gast.

Thomas Cole’s bucolic “Home in the Woods” (1847), in which a man with a fishing pole crosses a clearing toward his wife a woman and children at their cabin door, suggests that settlers have tamed an uninhabited wilderness. But Alan Michelson’s “Home in the Wilderness” (2012), a three-dimensional reproduction of the cabin pictured in Cole’s painting, reminds viewers that the land was long settled before white settlers from Europe made their homes: The cabin is constructed of paper printed with the 1809 Treaty of Fort Wayne that removed Native Americans from three million acres in Indiana Territory.

Artist Kent Monkman, who like Michelson descends from native inhabitants (Monkman’s Cree; Michelson is Mohawk), also addresses the European theft of native land and, like Hegarty, commandeers Bierstadt to make his point: His satirical painting “Fourth World” (2012) shows bare-chested white men, their buckskins replaced by camos, on horseback, driving buffalo toward the edge of cliff between two curved steel walls. (The curved walls are a reference to a sculpture by Richard Serra.)

There is also commentary on extinction of native species: John James Audubon’s 19th century aquatint engraving “Carolina Parrot” is paired with contemporary artist Walton Ford’s aquatint “Dying Words,” in which a group of Carolina parakeets are gathered to listen to their dying comrade’s last words. For a touch of dark humor, Ford has placed the parakeets, which we drove to extinction in the early part of the 19th century, in poses mirroring those of the men in Benjamin’s West’s 1770 painting “The Death of General Wolfe.”

Thomas Moran is known for his Western landscapes, including his magnificent “Lower Falls, Yellowstone Park (Grand Canyon of the Yellowstone),” which is also in the show, so it was fascinating to see Moran’s painting of nature as hideaway in “Slave Hunt, Dismal Swamp, Virginia,” painted as the Civil War was getting underway. A fleeing couple and their child are shown deep in a primordial setting of giant fallen trees and vines, looking over their shoulders at pursuers in the background.

A fantastic work is James Hamilton’s “Burning Oil Well at Night, near Rouseville, Pennsylvania” (ca. 1861) in which Hamilton portrays the burning gas as something beautiful to behold, setting the shooting orange flame and a web of burning branches against a black sky. His work is paired with “Prospecting” (ca. 1861-1863), a painting by Hamilton’s contemporary David Gilmour Blythe of a traveler carrying a bundle of “greenbacks” en route to a hellish place of industrial pollution.

“Cliff Dwellers” (1911), a George Wesley Bellows painting of a crowded street scene in a neighborhood of tenements, is not a scene of misery, but rather people carrying on with their lives; Aaron Douglas, however, whose figure of a man with arms outstretched in a canyon of stylized skyscrapers suggests the freedom that comes with escape to the city, includes smokestacks and cotton plants in the painting as a reminder of concurrent evils.

Two works, one from the 19th century and another from the 21st, offer respite from reminders of our misdeeds with their pure beauty. Fitz Henry Lang’s “Ship in Fog, Gloucester Harbor” (ca. 1860) is an atmospheric, finely rendered oil of men rowing away from a ship, its sails unfurled, at sunset. Its palette is not unlike that of a large Morris Louis stain painting of pale overlays of rose and aqua hues. Both are quietly gorgeous.

“Nature’s Nation” runs through Sept. 9. Tickets are $10 for nonmembers; free to members.