Stephanie Smittle 12/1/21 10:45am
Sterling K. Brown as Scipio A. Jones, the lawyer known for defending 12 Black men in the appeal process following the Elaine Massacre in October 1919.

Oxford American's annual music issue maps the movement of Southern influences on soul, gospel and beyond

Stephanie Smittle 11/10/21 12:07pm
With alternating covers of Tina Turner and Aretha Franklin, the "Up South" issue looks at the ways Southerners on the move transformed music scenes in Philly, Chicago and beyond.
Advertisement

Stephanie Smittle 11/5/21 10:36am
Two new albums and a video out today from Little Rock-based multi-instrumentalist/songwriter Aaron Sarlo: one from Kid City and another from Dangerous Idiots.

Stephanie Smittle 10/8/21 11:44am
Little Rock native and actor Ashlie Atkinson pops up in FX's new series on the Clinton/Lewinsky scandal.

Stephanie Smittle 10/7/21 11:57am
New video from Recognizer's "This Conversation is Echolocation."

Stephanie Smittle 10/5/21 3:02pm
Rodney Block, Dazz & Brie, the Irie Lions and other performers are on the schedule for the Arkadelphia Festival of the Arts, happening Friday, Oct. 15 and Saturday, Oct. 16.

Stephanie Smittle 10/4/21 1:13pm
In a virtual board meeting Monday, leaders at Arkansas Museum of Fine Arts gathered at the museum's temporary Riverdale location to announce updates on the museum's multi-million dollar renovation and on its reopening, slated for 2022.
Advertisement
Next page → 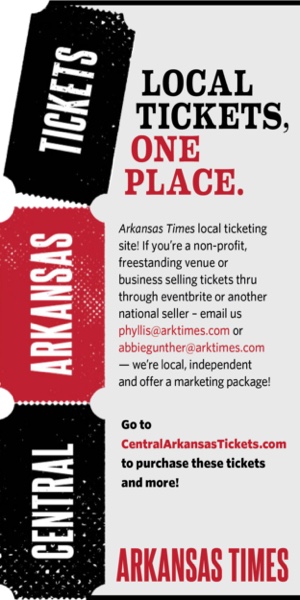