Better weather, more art: Now that we are firmly planted in spring, there are more activities in the gallery and beyond.

The biggest opening this weekend is Friday, April 8, when the Mosaic Templars Cultural Center opens “African American Treasures from the Kinsey Collection” documenting African-American life and culture. Bernard and Shirley Kinsey’s collection has been on tour throughout the nation, and includes such items as a first-edition copy of poetry by Phyllis Wheatley (1773); an early draft of the Emancipation Proclamation; letters from Malcolm X to Alex Haley; and artworks by Romare Bearden, Elizabeth Catlett, John Biggers, Alma Thompson and other significant artists.

There will be a reception from 6 p.m. to 8 p.m. opening night, with music by the Rodney Block Collective.

Also Friday night is the 2nd Friday Art Night after-hours gallery tour downtown. The show at the Historic Arkansas Museum featured on the cover of this week’s Arkansas Times is but one event. Other shows and galleries for 2nd Friday, which runs 5-8 p.m., are “Culture Shock: Shine Your Rubies, Hide Your Diamonds,” work by the women’s artist collective at the Butler Center galleries; the Arkansas League of Artist’s spring show at the Cox Center; William McNamara watercolors at Gallery 221; “Complete Spaces,” sculpture by Marianne Hennigar and jewelry by Christie Young at Arkansas Capital Corp.; and a screening of the motorcycle documentary “On Any Sunday” at the Old State House.

On both Thursday and Friday night, Matt McLeod Fine Art Gallery is hosting receptions from 5p.m. to 8 p.m. for its show “New, Fresh, Vibrant,” featuring the works of David Clemons, Jude Harzer, Wayne Salge and Jeremy Couch. Christ Episcopal Church hosts a reception from 5p.m. to 8 p.m. for its exhibit “Interconnections,” featuring the work of Maria and Jorge Villegas.

Coming up next week: Niki Ciccotelli Stewart, director of education and exhibitions at Crystal Bridges Museum of American Art in Bentonville, will give a talk at 6 p.m. Tuesday, April 12, at the Arkansas Arts Center as part of the Art of Architecture lecture series. There will be a reception beforehand, at 5:30 p.m. On Wednesday, April 13, HAM will screen the Arkansas premiere of “Audubon: The Film” at 5:30 p.m. The film was written and directed by Al Reinart, who co-wrote the screenplay for “Apollo 13,” and produced by John Aldrich, editor of “An Unreal Dream: The Michael Morton Story.” 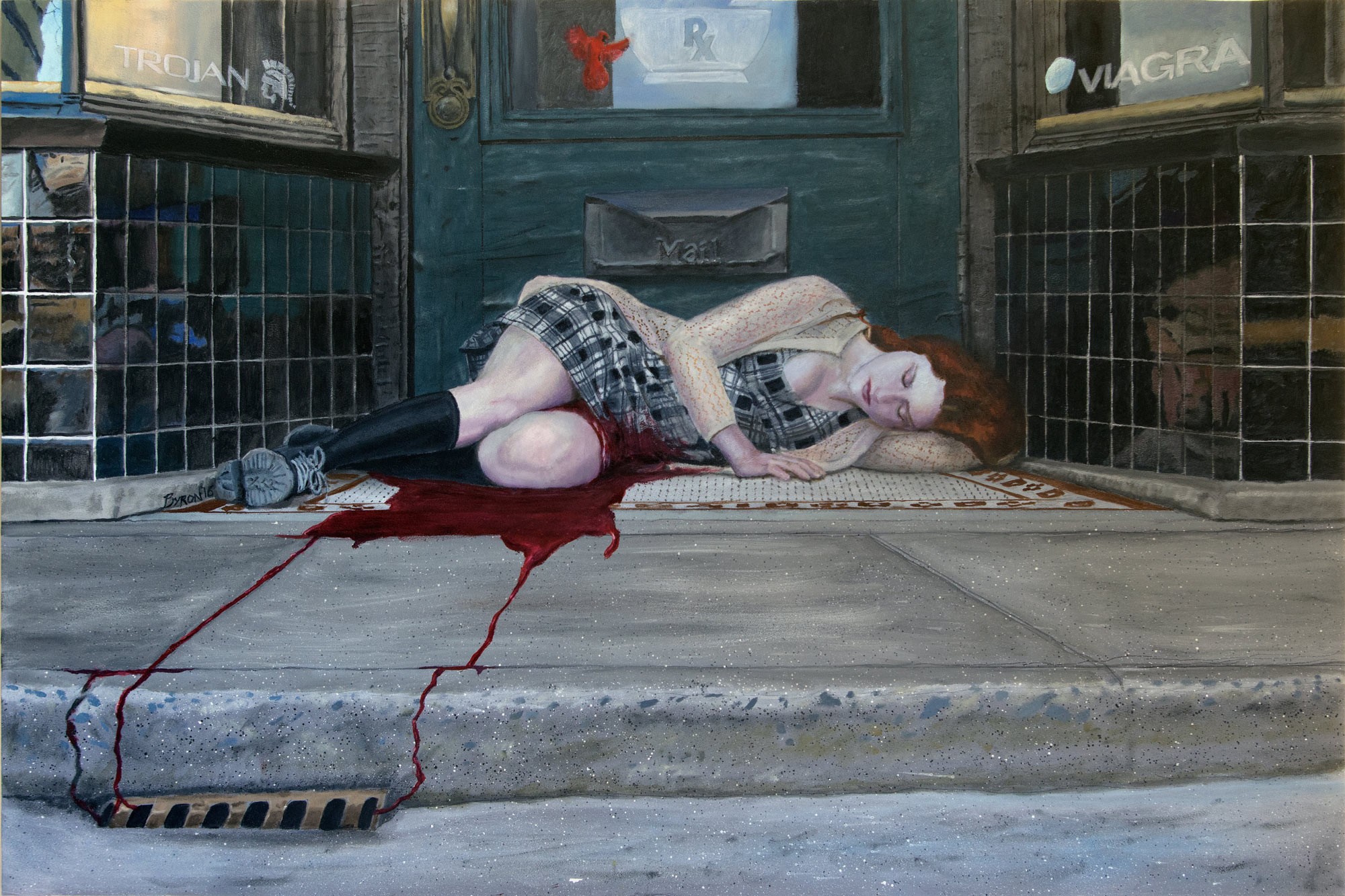 One painting you almost did not get to see this week was Byron Taylor’s “Legacy II,” which is part of the Arkansas League of Artists show at the Cox Center. The painting depicts a woman lying dead in front of a pharmacy, blood running from between her legs from, one gathers, a botched abortion. On Saturday, Taylor got a call from a woman with the ALA asking him to come pick up the painting because, Taylor said, she found it “offensive.” Taylor posted an image of the painting on Facebook and the fact that the ALA wanted it down. The post got more than 100 comments and was seen by many more.

Taylor went to the Cox Center to talk to ALA board president Ed Rhodes and secretary Sharon Franke. Rhodes removed his work from the wall when Franke would not back down, according to Taylor, but Taylor asked him to leave it up. Taylor didn’t take his down either, and later got a call from Franke that his work would remain in the show.

In a Facebook message, the ALA told the Times that “the Show Chairman and a few other of our members on hand at the time the piece was initially hung had such a strong initial reaction to the piece, in a disturbing way, that they initially didn’t feel it was appropriate. But after careful consideration of the content and the over all depiction and message behind the piece, it was decided to let the piece remain in the show.”

Taylor was incensed that the ALA wanted to take down his painting, and asked in his Facebook post if anyone wanted to start a “REAL Arts League.” But it should be noted that the ALA has never embraced any kind of controversy in its shows, at least none that I can remember. On its web page that shows 2015 art show pieces, there’s a cat on a saddle. Peonies. A little girl reading a book. A duck blind. Fish. Birds. A horse (“What the Hay!”) A diner, by Taylor himself. There is absolutely zero blood, much less ruptured uterus blood.

That doesn’t mean the ALA should not accept such work, just that it’s not surprising that the powers that be there might be offput. Censorship is a funny thing: Sometimes it’s forgivable. One can’t demand that an arts collective love one’s stuff.

Having said that, I’m glad the ALA is letting the painting stay in the show. An even better venue, however, would be the state Capitol, where legislators might be reminded of what will happen when they succeed at turning back the clock and making abortion illegal again.