Museums are not just for rainy days, and art galleries aren’t just for shoppers. In Little Rock and North Little Rock, the historical offerings will let you ponder the lives of the first settlers of Little Rock; think of the struggles and successes of African Americans in Arkansas; or learn about the administration of the 42nd president of the United States. Submariners, former first ladies of Arkansas, deaf education, Third World farming. The Museum of Discovery tackles hard science. Retail galleries celebrate (not just sell) homegrown talents as well as introduce genius from abroad. It’s good for the mind to see such things. Check out the art, history and science museums, university galleries and retail galleries on this list, all offering fodder for the gray matter.

The Arts Center is undergoing a $128 million expansion and rebuilding in MacArthur Park, so it has temporarily moved operations to a former Walmart at 2510 Cantrell Road. It continues to operate its Museum School and will host occasional art exhibitions there until the new Arts Center opens in 2022. Examples of its contemporary craft can be found at branch libraries. arkansasartscenter.org

These university galleries, located in the Windgate Art and Design Building and the Fine Arts building on the campus of UA Little Rock, feature works by both local and national artists, exhibitions that are sometimes designed with the curriculum in mind. ualr.edu/art/galleries.

Three exhibition spaces show works by contemporary Arkansas artists and objects drawn from the collection of the Bobby L. Roberts Library of Arkansas History and Art. The River Market facility, part of the Central Arkansas Library System, includes a retail gallery featuring the work by more than 100 Arkansas artists. robertslibrary.org

This gallery in the Center for the Humanities and Arts at UA Pulaski Tech in North Little Rock features changing exhibitions of works by national and international artists. charts.uaptc.edu

The Rep is a theater, but finds a place here because of art exhibits in its lobby. therep.org

Docked at the North Shore Riverwalk Park are two Navy vessels: the tugboat Hoga, used in the attack on Pearl Harbor in 1941, and the USS Razorback submarine, which was in Tokyo Bay during the formal surrender of Japan in 1945. The submarine is open for tours for those who can handle the 14-foot ladder that descends into it; otherwise, check out the exhibits in the museum on land. aimmuseum.org

The visitor center records the historic desegregation of Central in 1957 by the courageous Little Rock Nine. Exhibits include such things as a remake of the dress that Elizabeth Eckford wore when she was taunted for her attempt to enter all-white Central, historical photographs and videos. nps.gov/chsc

There’s no other museum in the country like this SoMa neighborhood space that features permanent and changing exhibits on women’s purses, accessories and other women’s interest artifacts. The shop features purses, jewelry, hats unique to Little Rock. facebook.com/essepursemuseum

Indoors, find interactive social science exhibits on the issues of hunger and poverty and learn how Heifer International works to help farmers in Third World countries become self-supporting. Outdoors, there are alpacas! And sheep, goats and chickens, in a learning area that demonstrates earth-friendly farming practices. heifer.org/visit-heifer

HAM is the best of both museum worlds: The 19th century structures on its grounds, including the 1826 Hinderliter Tavern, provide a glimpse into territorial Little Rock; inside find galleries devoted to fine art by Arkansas artists, as well as a significant collection of Bowie knives and the multi-gallery “We Walk in Two Worlds” permanent exhibition on the Caddo, Quapaw and Osage in Arkansas from early history to today. historicarkansas.org

The 1840 Tower Building of the Little Rock Arsenal in MacArthur Park — so named because Gen. Douglas MacArthur was born there — houses the city’s military museum, where artifacts, photographs, weapons and other military items tell the story of Arkansas’s soldiers, from the Civil War to Vietnam. macarthurparklr.com/military-history-museum

Exhibits, many interactive, on African-American life in Little Rock and the segregated South are in the replicated headquarters of the Mosaic Templars of America National Headquarters, a fraternal society founded in Little Rock in 1883. The museum also collects and exhibits art made by African-American Arkansans and hosts special events in its third-floor ballroom. mosaictemplarscenter.com

This science museum for children offers hands-on exhibits on weather, human health, technology and more, along with tinkerfests and other special events targeted at all ages. It’s also the hub of the statewide Discovery Network for STEM learning funded by the Donald W. Reynolds Foundation. museumofdiscovery.org

This antebellum building served in the 19th century as the state Capitol and in the 20th as the backdrop for President Clinton’s announcement that he would run for the presidency in 1991 and his election night speech in 1992. Its mission, achieved with permanent and changing exhibitions and special events, is to interpret Arkansas history with its diverse collection of thousands of artifacts, from quilts made by African-American women to art pottery to battle flags. oldstatehouse.com

The center, which also includes the Clinton collection held by the National Archives, tells the story of the 42nd president’s eight years in office with displays on policy, interactive exhibits and a full-size replica of the Oval Office. It also hosts changing exhibitions, educational programming, lectures and has a restaurant, 42 Bar and Table. clintonlibrary.gov

The Arkansas Game and Fish Commission operates this center along the Arkansas River in downtown Little Rock that features exhibits on the state’s natural divisions, from the mountains to the Delta, calls of wild animals and an aquarium with moving water featuring larger fishes. centralarkansasnaturecenter.com 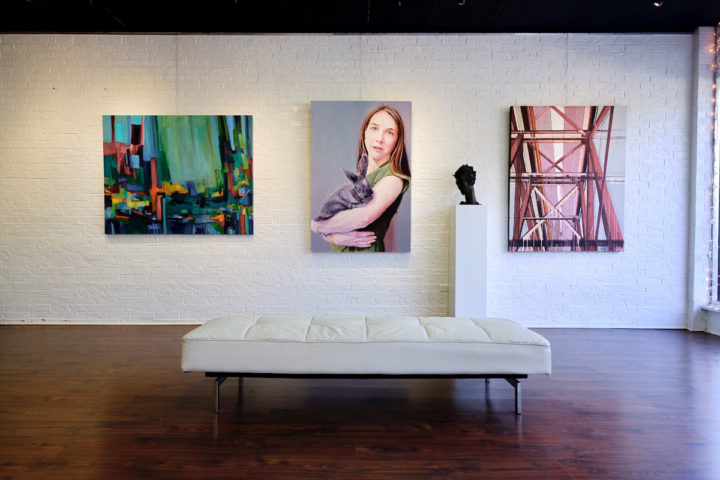 CANTRELL GALLERY: The oldest operating gallery in Little Rock has a stable of dozens of Arkansas artists, and also does framing. cantrellgallery.com

THE NEW GALLERY: As the name implies, the SoMa gallery is the latest gallery to open in Little Rock. It features month-long exhibits by emerging and mid-career artists. thenewgallery.net

RED DOOR GALLERY: This longtime Park Hill gallery features work in all media with a changing stable of artists, and does custom framing. reddoorgalleryonline.com

STEPHANO’S: Works by Arkansas’s greatest pop artist, Stephano, and others are featured in this Heights gallery. stephanostudios.com