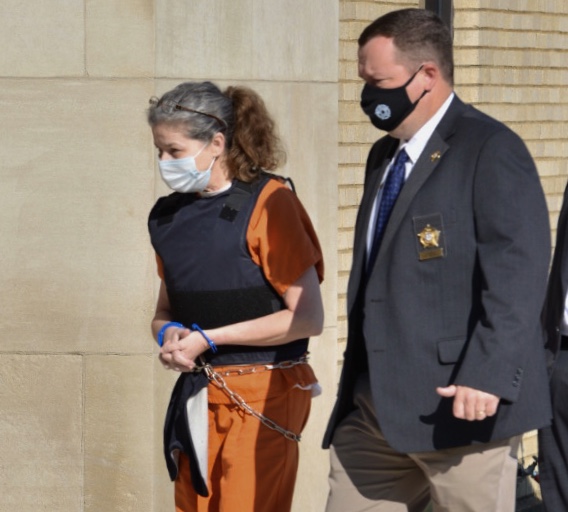 O’Donnell escorted into court in Pocahontas.

UPDATE: In a negotiated deal, Rebecca O’Donnell has pleaded guilty to first-degree murder and abuse of a corpse for the 2019 slaying of former state Sen. Linda Collins, whose decomposed body was found June 4 outside her Pocahontas home. O’Donnell has also pleaded no contest to two counts of soliciting murder, charges that were pending in Jackson County.

O’Donnell, 49, has been sentenced to 40 years for the first-degree murder charge, three years for abuse of a corpse (attempting to hide the body) and seven years, to be served concurrently, for each of the solicitations of murder counts, the Times’ Brian Chilson reports from the Randolph County Courthouse. The concurrent seven-year terms will be served consecutively to the 43 years for a total of 50.

O’Donnell will receive a credit of 417 days for time served. She will be eligible for parole.

Special Circuit Judge John Fogelman said that documents in the case would be made available online next week.

Little new was revealed in the proceeding . O’Donnell told the court she had gone to Collins’ house, intentionally killed her and tried to hide the body.

UPDATE: Talking to the press after the hearing, Collins’ son, Butch Smith, described finding his mother’s body, and said he believes that O’Donnell had been stealing money from Collins, and O’Donnell killed her when Collins confronted her. He wiped tears away as he spoke.

Statement from Daughter of Linda Collins:

“Today Rebecca O’Donnell pleaded guilty to killing my mother, to abuse of my mother’s body and no contest of solicitation to commit capital murder. Today our family has found swift justice by way of a plea deal.

If Mom was here today, I have no doubt that she would quote the Bible and tell us that we can find peace in God.  We know one day Rebecca O’Donnell will have to answer for her sins before the judgment seat of Christ. In Romans Chapter 12 Verse 19 it says, “Dearly beloved, avenge not yourselves, but rather give place unto wrath: for it is written, Vengeance is mine; I will repay, saith the Lord.” While our efforts of seeking justice on Earth may fall short in our eyes, it is guaranteed by God that justice will be fully served swiftly and justly when we are called to answer for our sins before Him.

Thank you all again for your thoughts and prayers for our family during this case. We want to again thank the Arkansas State Police and the Randolph County Sheriff’s Department for their hard work.  Without your efforts, this case would not have been solved so quickly but also for keeping our families safety and privacy a priority as well.”

Statement from Son of Linda Collins:

“I am Butch Smith, Linda’s oldest child. Some of you may remember me from managing the hotels or out with mom at political events over the years. I would like to say that what happened to my mother was an awful deed, carried out of hate, jealousy, and greed. I believe that Rebecca O’Donnell was stealing money from my mother and when my mother confronted her about it, she snapped and stabbed my mother to death in a fit of rage and perceived self-perseverance (to try to prevent herself from going to jail). As some news agencies have reported, I did find my mother’s body on June 4th at her home. She was lying face down, wrapped in one of my old comforters and shoved underneath a tarp in her driveway. I will never not be able to see that picture burned into my brain. The smell of the dead body laying outside wrapped up and under a tarp for approximately a week in a hot Arkansas summer was nausea inducing in and of itself. The swarm of flies that flew out and surrounded me. The sight of her white blonde hair moving because of the number of maggots crawling on her. The last memory of her that I have was of me making that 911 call and trying not to vomit all over at the sight and smell of my mother’s body.

My thought on the conclusion of this case is that none of the punishments allowed per Arkansas state law will come close to what I feel is right and equal punishment for her. The plea deal was not what my first choice would have been but at least we do have a guaranteed amount of time that she will be imprisoned for and we will have the ability as the victim’s family to argue against her release at her parole hearings.

I would personally like to thank the Lead Investigator, Creston Hutton, of the Arkansas State Police, the Randolph County Sheriff, Kevin Bell and everyone else that worked their butts off to make sure that no stone was unturned, that no piece of evidence was overlooked, and that the safety, security, and privacy of my family were first and foremost during the entire investigation. Thank you all for the well wishes, the happy thoughts, the amazing stories that you all have shared. Thank you.”

O’Donnell, 49, was arrested 10 days after the body was found as she and her fiance drove to a family visitation the night before Smith’s funeral. O’Donnell was a longtime friend and campaign supporter of Smith.

Information in the case has been mostly sealed. A partial release of an arrest affidavit said Collins was fatally stabbed and investigators were led to O’Donnell by video from Smith’s home security system stored in the cloud. It included images of O’Donnell reportedly removing a security camera. The cloud images apparently include a picture of the knife believed used in the slaying.

No mention of motive has been made. O’Donnell and her fiance, Tim Loggains (who has not been implicated in the case), had a close enough relationship, however, that Loggains handled some financial matters for Collins, according to records in Collins’ divorce from retired Judge Phil Smith. Loggains had stoutly maintained O’Donnell’s innocence.

At today’s hearing, Special Circuit Judge John Fogleman was expected to rule on the release of documents compiled for the prosecution case. Special Prosecutor Robert Dittrich had continued to build evidence in the case with subpoenas for material from Collins’ computers and phones and about her business dealings. One theory was that the kiling followed a confrontation between Collins and O’Donnell over financial issues.

O’Donnell also faced charges in Jackson County, where she was initially held after her arrest, for allegedly talking to inmates look about arranging to have people killed and evidence destroyed.

O’Donnell’s trial in the murder case had been scheduled in November.  The trial of the Jackson County charges of soliciting capital murder was set in December.