The suit, filed in the U.S. District Court for the Eastern District of Arkansas, names 23 defendants, including Hayward Finks and Alice Fulk, two assistant chiefs who have sued Humphrey and were finalists for the chief job; the FOP and its executive board, which has frequently tried to oust Humphrey; and Charles Starks, the former LRPD who fatally shot Bradley Blackshire and was fired by Humphrey only to be reinstated by a Pulaski County circuit judge. Starks, who later quit the LRPD, has also sued Humphrey. Fulk just announced that she’s retiring from her position to head the State Capitol Police Department.

The lawsuit was filed on behalf of Humphrey by Mike Laux, who has repeatedly sued the Little Rock Police Department over use of force.

Accompanied by Laux, an emotional Humphrey defended his decision to file suit against members of his own department at a press conference at Mosaic Church in Little Rock.

“This is for the men and women of this city that believe in me, that believe in this city … and want to hold police officers accountable,” Humphrey said. He said he knew that there would be those questioning why he’d waited so long to respond to lawsuits and critics. “God told me it was time,” he said. “Other people play checkers, smart people play chess. Some do algebra, I do calculus.”

The lawsuit alleges that Finks, Fulk and other LRPD leaders intentionally sabotaged the LRPD’s response to protests held in the wake of the killing of George Floyd to make Humphrey look bad, which they then used as “ammunition” to file lawsuits. Humphrey’s suit says that Finks, Fulk, et al have abused the courts.

The lawsuit also alleges in part that LRPD Lieutenant Christina Plummer conspired with Matt Murski, a former LRPD officer who now works for WatchGuard, the city’s dashcam video provider, to obtain dashcam video from a police cruiser showing Humphrey at the home of a friend early in the morning. The suit alleges that Plummer leaked the video to local blogger and City Board candidate Russ Racop, who suggested that Humphrey was having an extramarital affair. According to the lawsuit, Starks also suggested that Humphrey was having an affair on a blog he maintains, Make Little Rock Great Again. Humphrey is suing Racop and Starks for defamation.

Humphrey, at times tearing up and at times angry, said the allegation was untrue.

Humphrey said he’d been told that, if he resigned, the video would go away. He declined to say who told him that.

Several weeks ago, most of the LRPD command staff sent a letter to Scott and the Little Rock Board of Directors, saying that Humphrey had “created a very toxic, hostile, and explosive work environment” and calling the department “dysfunctional.” Amid that, the lawsuits and this countersuit, how will the LRPD continue to serve and protect?

Humphrey said it would continue to function as it has. He said the city had seen an overall decrease in crime under his watch and introduced a number of new initiatives. He said there was no “working problem,” and without naming names, he said that several members of the command staff who signed the letter had since apologized to him. He also later said he had a great relationship with one of his assistant chiefs, who by process of elimination, has to be Wayne Bewley, who signed the letter but hasn’t been party to any lawsuits against the chief. 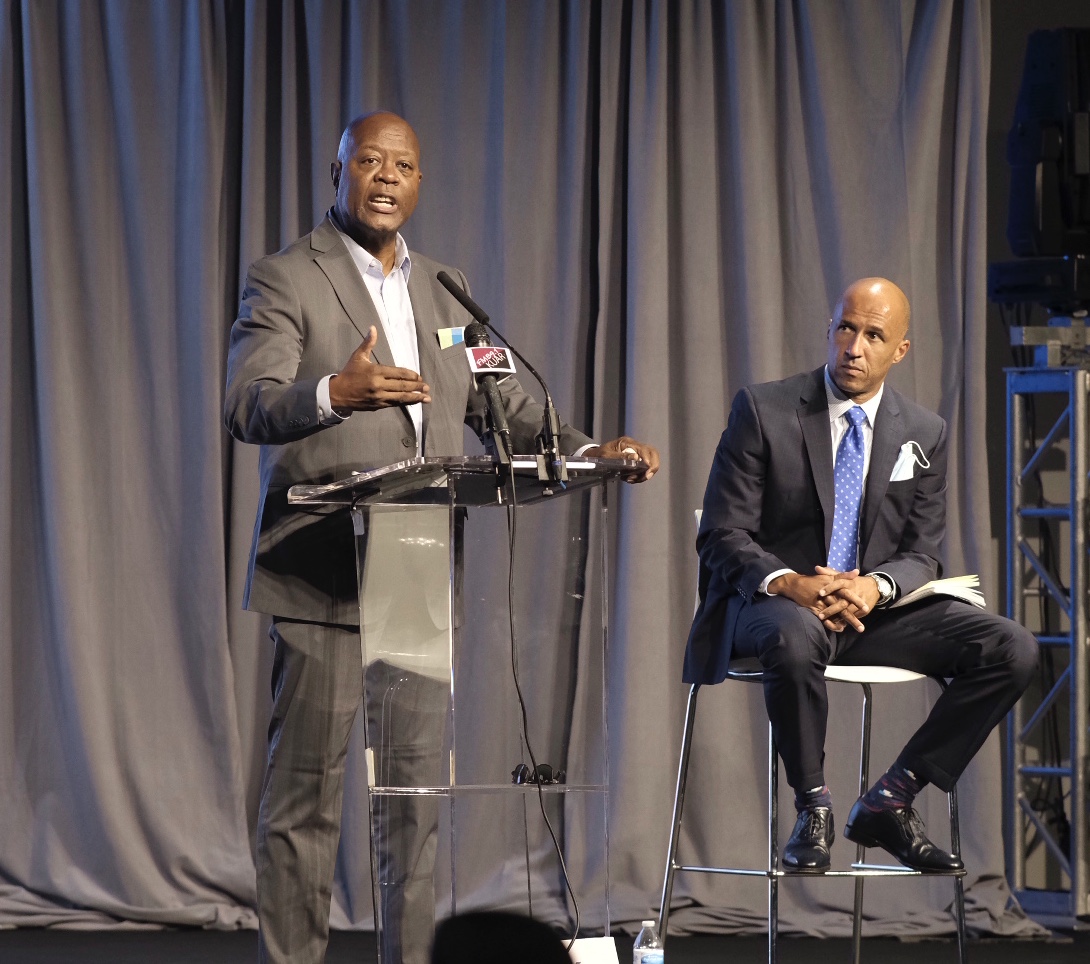 Laux said the alleged actions of the FOP fit in with a narrative that’s playing out across the country. “I think what you’re seeing is an effort to blunt progress, an effort to hoard resources, to grab money, to grab power, to solidify power.” He said that elections have consequences. Scott campaigned on police reform and hired Humphrey to execute his vision. Laux said the FOP was doing everything it could to stand in the way of change and retain power.

Laux included a lengthy addendum to the federal complaint, documenting a long history of police misconduct and resistance to reform. He argues that there are parallels between the treatment of Lawrence Johnson, LRPD chief from 2000-2005. Johnson, who was also black and reform-minded, was strongly opposed by the FOP, Laux said.

Though the FOP is made up largely by white officers who live outside of the city of Little Rock, Humphrey said the suit wasn’t about race, religion or where someone lives. He said that 95 percent of the LRPD were “amazing employees” and he believed that the majority of the members of the FOP supported him.

“I want to make it very clear to the men and women of the Little Rock Police Department, I’m not mad at you,” Humphrey said. “I love each and every one of you. I’m disappointed as the police chief I have to take these actions. This is unheard of.”