Read this month's issue
Browse the issue archives
Advertisement
Home Arkansas Blog Politicians, such as Sarah Sanders, and their charities: A pattern emerges

Scrutiny to a charity set up by a Virginia politician so happens to turn up an Arkansas link that inspires questions about the political trappings of the venture.

Axios reports that Virginia Republican gubernatorial candidate Peter Snyder has boasted that he and his wife had put as much as $2.8 million into a nonprofit he created, the Virginia 30 Day Fund, to make forgivable loans to struggling businesses. Problem: Statements he submitted to the IRS  indicated the charity didn’t expect to raise or spend more than $50,000 its first three years. The group puts the difference down to unexpected success in growing the organization to serve not just Virginia but the nation.

Indeed, the organization appears to have a national footprint. It is incorporated in Arkansas. And the corporation filing identifies it as having the fictitious name (a name that may be used in the conduct of business) of the Arkansas 30 Day Fund.  It was registered by Hannah Ray, who lists an Arkansas address. A person by that name is an Arkansan whose online references include time working for Sarah Huckabee and a variety of other Arkansas Republican politicians. I’ve sent her a message inquiring about the linkage. 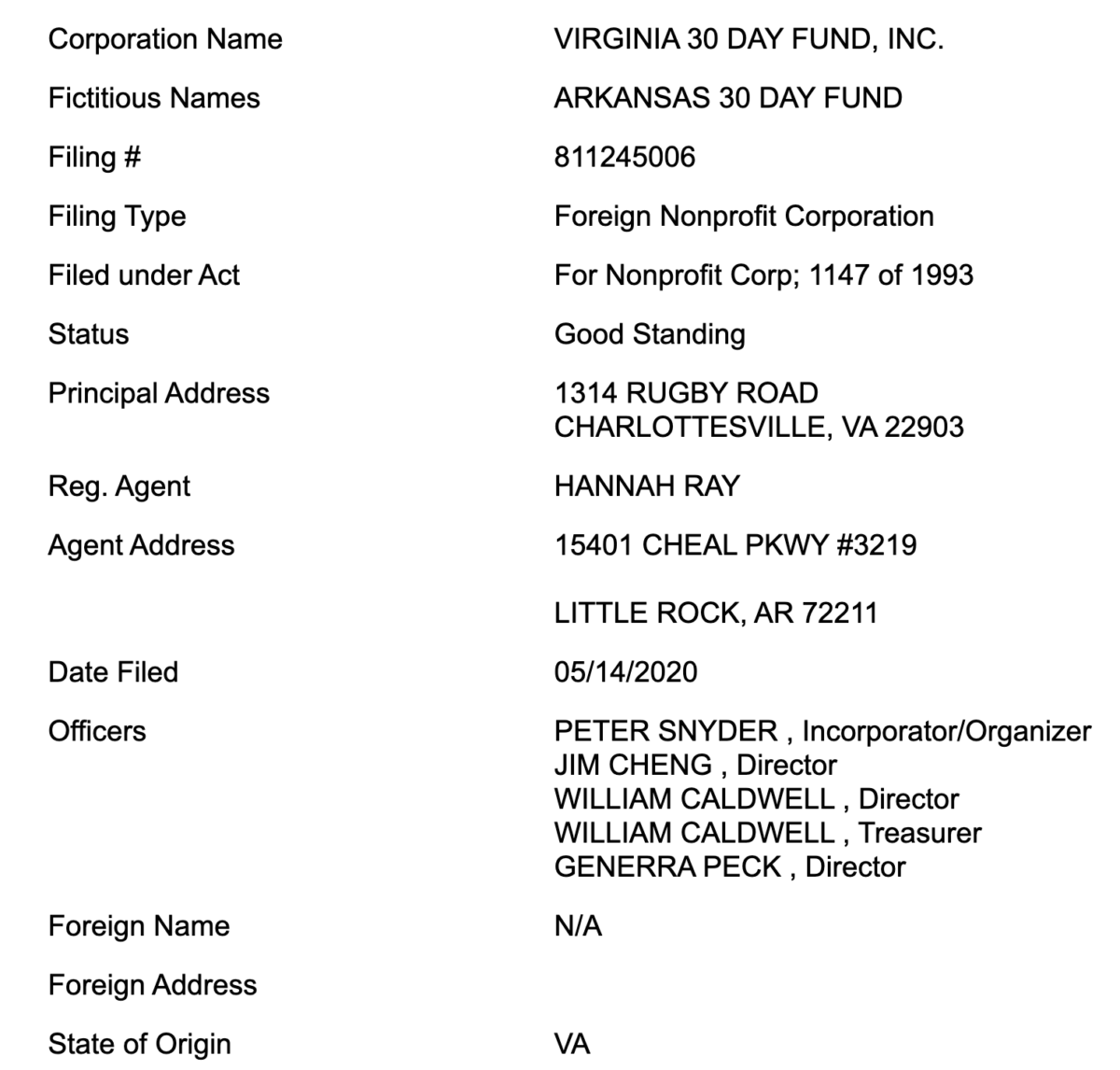 The Arkansas 30 Day Fund is the name of an organization announced last year by Sarah Huckabee Sanders, now a Republican candidate for governor in Arkansas. It was in business briefly to raise money for forgivable loans to small business. The organization has not disclosed specific contributions. I wonder if Snyder might have been a driving force behind Sanders’ effort?

The Arkansas 30 Day Fund website is no longer operable. It shut down in July with a boast by Sanders about businesses she’d helped.

Sanders popped up again recently, however, announcing a $10,000 contribution from the 30 Day Fund to repair fire damage to Jones Bar-B-Q in Marianna. The source of the money wasn’t disclosed.

Two 30-day funds by Republican gubernatorial candidates with seeming Arkansas ties? Funds that build goodwill for political candidates through contributions from undisclosed sources? Not to look these gift horses in the mouth, but the feel-good activities bear a little resemblance to in-kind campaign contributions. Certainly, if Snyder or Sanders are the sole contributors to their funds, there’s no problem in the gifts.

Candidate Sanders, to date, has avoided questions from Arkansas reporters and restricted her public appearances to other states. So I don’t expect her to elaborate on the topic for me.

I did a quick look at Guidestar for records of registered nonprofits. The Arkansas 30 Day Fund isn’t listed. But there’s a registered 30 Day Fund in Pennsylvania headed by Jeff Bartos, a candidate for U.S. Senate. Elsewhere, I found that former Republican Gov. Chris Christie started one in New Jersey. Brian Sanderson, former policy director of the Republican Governors Association, started one in Mississippi.

And speaking of charities to help struggling businesses by Republicans:

To wide media attention similar to that given Sanders’ 30 Day Fund, former Razorback and pro football player Jake Bequette announced recently the creation of the Arkansas Fund, another nonprofit to make donations to small businesses. He spent some time in law school and became an Army Airborne officer. Sounds a bit like Tom Cotton, but some say with more screen appeal. And speaking of screen appeal, he’s producing quality videos of the grateful businesses he’s been helping. For example:

Dave vows to keep his restaurant open “to the bitter end.” He’s been part of the LR food scene since 1980, and he’s not going away quietly. 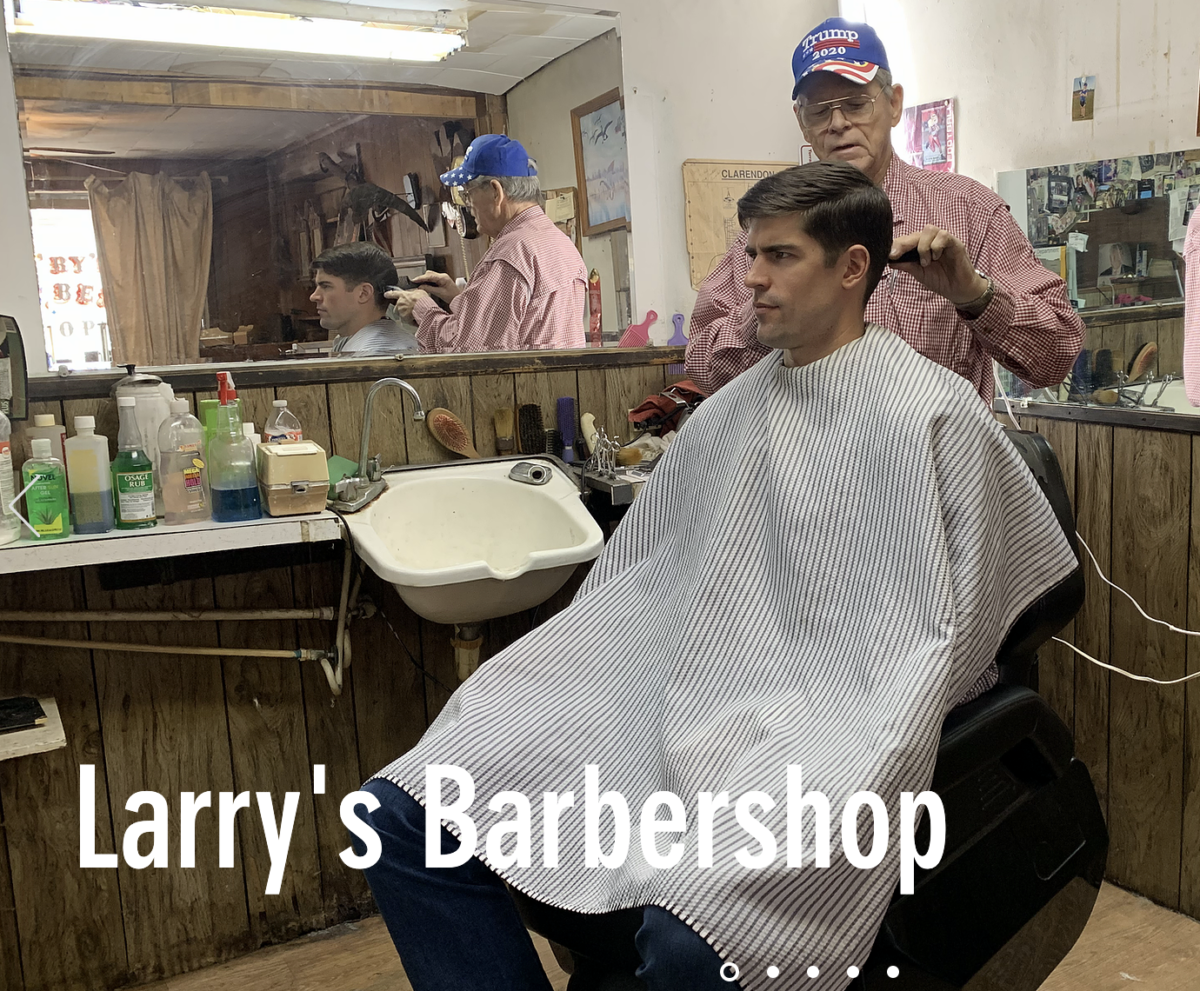 CHARITY AT WORK: A trim for benefactor Jake Bequette.

Bequette appears to be a conservative Republican as are the other philanthropists mentioned. here. He drew some attention when he joined the chorus about non-existent election fraud in the 2020 presidential election. The mail-in process was a “dumpster fire,” he wrote on Twitter, and called for a constitutional amendment to limit on early voting, require in-person voting “with very few exceptions” and require photo ID for all.

Not to question the good deeds of contributions to fine people like my old friend Dave Williams at Dave’s Place, but I do have to wonder if perhaps Bequette is considering a political future. I sent him a note inquiring but haven’t heard back.