An Arkansas circuit judge on Tuesday, Feb. 24, delayed Tim Howard’s retrial on charges of the 1998 murder of Brian and Shannon Day because a key witness was to be unavailable the week of March 2, when the new trial was to begin. It is now scheduled to start on April 23.

At Tuesday’s hearing, Circuit Judge Charles Yeargan denied a motion by Howard’s attorneys to dismiss the charges against Howard. Defense attorney Patrick Benca had argued that, because the prosecutor failed to provide several “important” pieces of evidence as required, it will be impossible for the new trial to be fair.

When Prosecuting Attorney Bryan Chesshir acknowledged that several items of evidence sought by Benca could not be provided, Yeargan interjected:

“It’s frustrating for me to sit here and listen to all this. As you know, this court took a giant leap to order this new trial.

“We all agreed that there would be full and complete discovery. Now we’ve got all these holes that you’ve come up here with. It’s very frustrating — I swear — it’s frustrating to this court.”

When Yeargan acknowledged that the situation was probably frustrating for the attorneys as well, Howard, who has been jailed for the past 17 years and who has thus far sat quietly throughout every proceeding, spoke up. “It’s frustrating for me!” he said.

Yeargan admonished him to let his attorneys do the talking.

Finally, Yeargan dismissed Howard’s argument that he is being subjected to double jeopardy because he was tried unfairly once and now faces the prospect of an unfair second trial because of “continuing” misconduct by state officials. That issue, the judge said, was for a court higher than his to decide.

Before the hearing began, sheriff’s deputies served me with a subpoena, ordering that I appear at the trial and bring “all notes and recordings, both audio and visual” — presumably of my interviews with Howard. I told Chesshir I would not comply.

He has listed me as a prosecution witness, despite my acknowledged friendship with Howard stemming from years of reporting on his case. When asked whether that would bar me from the courtroom, making it impossible for me to report on the trial, Chesshir said that “at this time” he thought he would allow me to attend.

The conduct of prosecutors in this case has been at issue for years. A finding of prosecutor misconduct led Yeargan to vacate Howard’s original conviction and death sentence, handed down in 1999. And complaints about misconduct by Chesshir since Howard was granted a new trial have dominated recent hearings.

Yeargan has heard it all.

He officiated at Howard’s first trial in 1999. Fourteen years later, in 2013, it was he who vacated Howard’s conviction and death sentence.

Yeargan took that unusual step after finding that Tom Cooper, the prosecutor at the original trial, had not provided Howard’s public defenders with notes about DNA the state presented as evidence.

At Howard’s original trial, Cooper told jurors that DNA found on a pair of boots was of “monumental” importance in linking Howard to the murders. Years later, however, attorneys appealing Howard’s death sentence learned that the technician who tested the DNA had made notes about contamination that had occurred while the tests were being conducted.

Those notes were never provided to Howard’s defense counsel. Even when their existence became known, the Arkansas Attorney General’s Office resisted releasing them for years.

A court finally ordered state officials to surrender the notes. Once they were obtained, Howard’s attorneys took his claim of prosecutor misconduct to the state Supreme Court. That court eventually sent the case back to Yeargan for review.

Yeargan concluded that Cooper’s failure to provide the lab notes to Howard’s attorneys had been “inadvertent.” Nevertheless, he ruled that, as the violation did constitute misconduct, Howard’s conviction would be vacated and a new trial granted.

At that point, Howard officially became an innocent man, a man never convicted of a crime. Chesshir could have declined to charge Howard again — a decision that might not seem outrageous in light of the fact that when Howard filed the direct appeal of his sentence, three of the state’s seven Supreme Court justices wrote that they found the evidence presented by Cooper insufficient to sustain a conviction.

But Chesshir chose to charge Howard with the murders again. He now has the burden of proving Howard’s guilt.

Among the items of evidence that Howard’s attorneys said have not been provided and that Chesshir said cannot be found are: a tape recording of a witness made at Millwood Lake by Sheriff Danny Russell and Arkansas State Police Investigator Hays McWhirter; Russell’s interview notes of another witness who said the sheriff questioned him; a report by a state Game and Fish officer who assisted at the scene where Brian Day’s body was found in a U-Haul truck and later at the Days’ home, where Shannon Day’s body was found in a closet; the coroner’s report for Shannon Day; X-rays that were taken of Brian Day’s body; and photos that were taken of the Brian Day crime scene by Jim Williamson, a reporter for the Texarkana Gazette who at the time was also an auxiliary police officer. 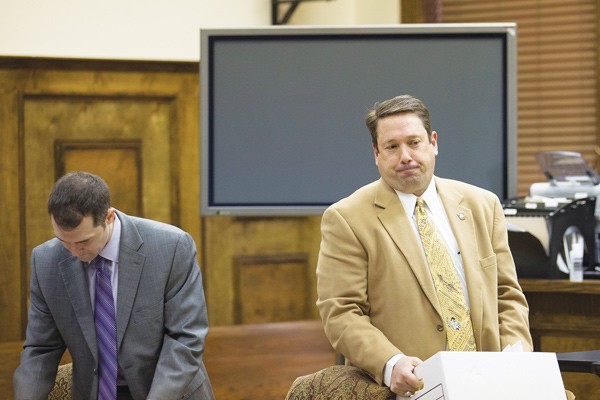 The headline in the Wednesday, Feb. 25, Texarkana Gazette, above an story by reporter Jim Williamson, reads: “Second trial on hold for convicted killer.”

There are at least three problems with that.

The second problem is that this grossly inaccurate headline appeared in the biggest paper in the region where Howard’s retrial is to take place. It may complicate seating a jury.

The third, and perhaps biggest, problem is that Williamson may have an unacknowledged conflict of interest. (I acknowledge mine.)

Howard’s attorneys believe that Williamson may have assisted police at the time of the murders.

In his motion alleging prosecutor misconduct, Patrick Benca described photos of the site where Brian Day’s body was found that Benca says the prosecutor has not provided. The motion notes that Investigator Hays McWhirter testified he took the photos.

“However,” the motion says, “the defense has learned that to not be accurate.”

Rather, Benca wrote, “Jim Williamson, who at the time owned part of the Ashdown newspaper and was an auxiliary police officer, took photographs of the scene as well. It was common for Williamson to take pictures of crime scenes back then because he had better photography equipment and access to a dark room.”

At Tuesday’s hearing, Benca told the court that Williamson had provided defense attorneys with negatives of photos of the crime scene they had never seen before. Benca also quoted Williamson as saying that, after he shot the photos, “he was asked to ‘develop these ASAP.’ “