From the outside, the $6 million BOLD Team medical marijuana cultivation facility looks a bit like a prison and smells like a skunk. A and naive, reporter thought the smell was coming from its mammalian source just outside the concertina-wired fence that surrounds the nursery in a fallow field in the middle of Cotton Plant (Woodruff County), but a savvy photographer set her straight.

Things are brighter on the inside, with long rooms of healthy, green plants nurtured and tended scientifically, with special grow lights, thermostats and air measuring devices, and vats of varying mixes of liquid fertilizer. Fans to blow air over the plants, fans to remove exhaust. A laboratory and a Brandeis University-trained chemist. A computer monitor tracking humidity fluctuations.

There are nine nurseries: The “mother” plant room, where clones are rooted; a “veg” nursery for “teenage” plants; and seven growing rooms, each holding 656 mature, budding plants. Each of the veg and mature nurseries are nearly 9,000 square feet.

The plants budding now will produce the first legal marijuana harvest in Arkansas, on April 22 or 23. BOLD Team’s products, which include 24 strains, should be on the market by May 10. Those products will include flowers and pen cartridges filled with distillate for smoking. 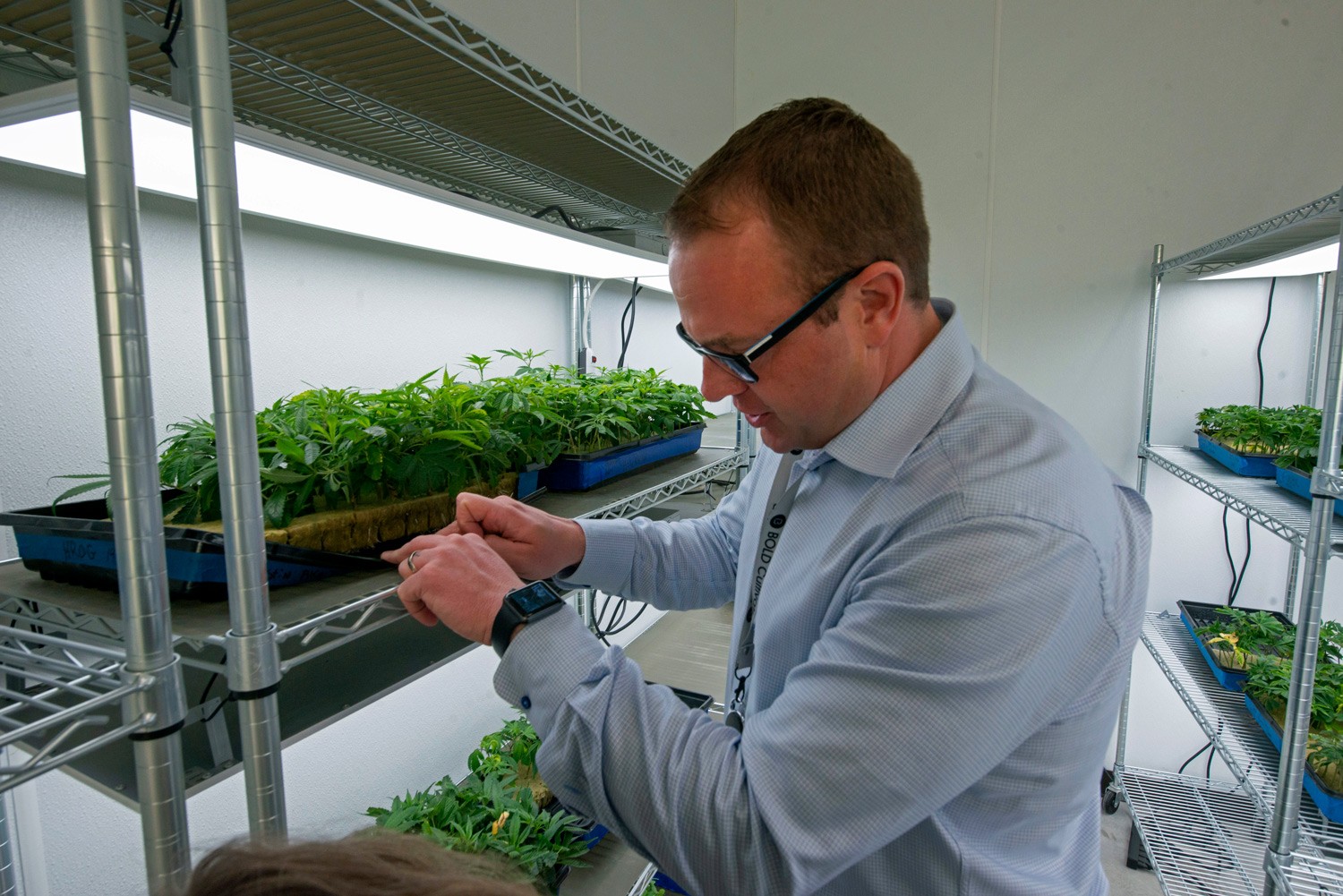 BOLD is an acronym of names of owners Danny Brown, Kyndall Lercher and Mark and Misty Drennan, with inventory director Cayne Orman as the O. Kyndall Lercher’s husband, Robert Lercher, is the director of public relations. With the exception of Brown, they hail from Beebe, down-to-earth folks who, besides their venture into pot, own other businesses. Robert Lercher owns a company in McRae that repairs hail damage; Mark Drennan worked for the ABF trucking company in North Little Rock and owns a roofing business with Orman; Danny Brown owns Willy D’s Rock & Roll Dueling Piano Bar. He’s in another business that gets people high, too: Altitude Trampoline Parks.

Robert Lercher and Mark Drennan gave the Arkansas Times a tour of the facility March 13, starting in the mother (or what Drennan calls the “mom”) room, where snips from dozens of mother plants are being rooted to create BOLD Team’s family of products. All the plants are females: To keep them from going to seed instead of continuing to flower, no males are allowed. Seedless (as in sinsemilla) flowers have higher resin content and are more potent. (If the company eventually wants to grow seed, it will need the plant equivalent of a rooster.) 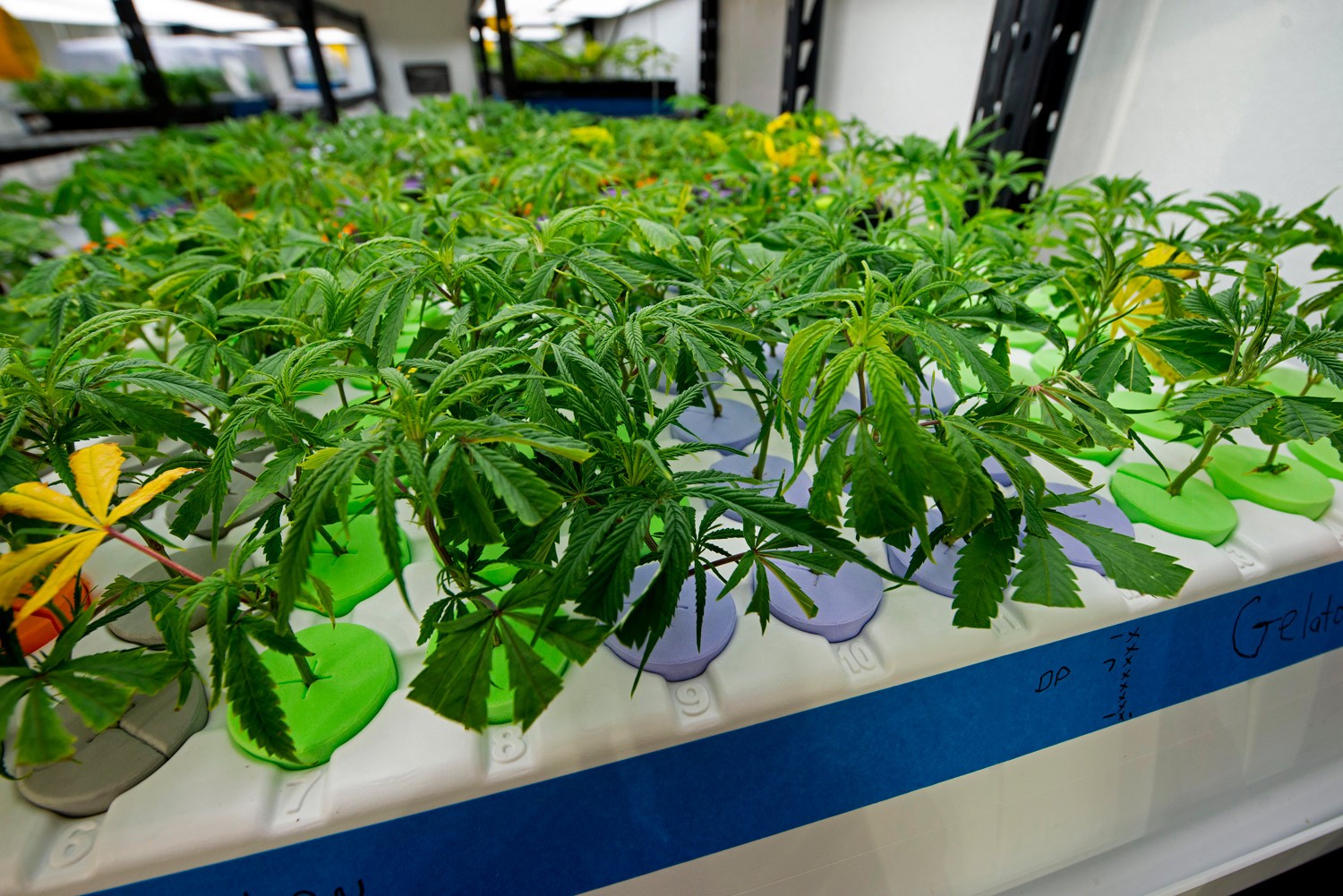 In the mother room, clones of Cannabis sativa and C. were happily rooting, either in small cubes of a nutrient-saturated called or an aerial form. They were growing under lights in the blue spectrum, at a wavelength that benefits baby marijuana plants (and, as it happens, boosts alertness in humans).

After rooting, the plants are potted in a medium of coconut shells and perlite and over the next several weeks are to long, clear-roofed growing areas. First stop: the “veg” nursery for their three-week adolescence. Here, pipes carrying fertilizer from three large vats provide calibrated nutrition to the plants. A PAR meter, which measures light photons, keeps the light in prime photosynthetic range and makes sure the teenagers don’t get sunburned: When it hits a high reading, it will turn off half the lights in the room; in direct sunlight, the meter will turn off all the lights. Another device measures temperature and carbon dioxide levels.

At seven weeks, the plants are moved into the facility’s seven flowering rooms, where the mature plants — now at around 7 weeks old — are encouraged to flower under high-pressure sodium lights in the red spectrum, 12 hours on and 12 hours off, mimicking the end of the growing season.

Should the growing rooms get too hot, panels into a cooler common area between the growing rooms will lift and its roof can open. Should that not do the trick, a system of cold water will pour down over the walls. Lercher, 35, and Drennan, 46, have seen a demonstration; they figure the Arkansas summer will trigger the system for real 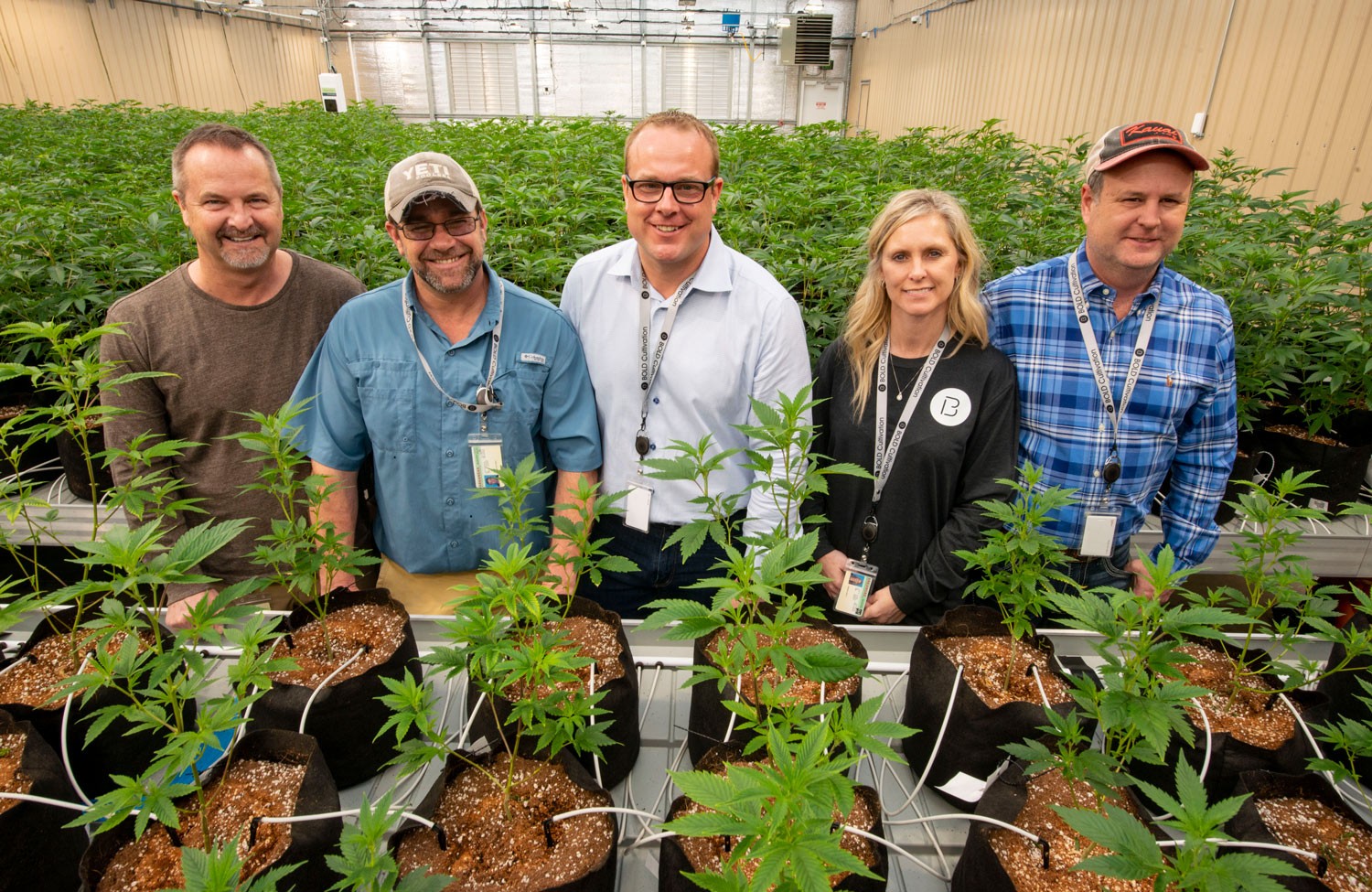 The growing process, from clone to harvest, takes 16 weeks, Drennan said. After harvest, plants are dried or turned into oil and samples are sent to the lab for testing for substances out in state law, such as pesticides, and to measure the percentage of THC (tetrahydrocannabinol) and CBD (cannabidiol) in the samples. Discarded plants are weighed, that information is provided to Alcohol Beverage Control, and the vegetation is rendered unusable by being ground up and mixed with a nonintoxicating substance, like dirt or grass clippings, equal to the weight of the waste.

BOLD Team will sell marijuana in both bud and oil form. To make oil, buds are loaded into tanks and reduced by pressurized propane and butane in an hour-long process only a chemist could understand. It takes 20 pounds of buds to make 3 pounds of oil. The oil, too, must undergo lab testing.

What’s happening at BOLD Team is a far cry from putting a bunch of pot plants under a grow light in your basement and hoping for the best. “We had no idea,” Misty Drennan said of the science involved in .

During a tour of the veg room, where 2-foot-tall strains of Elite Limonette, Gelato and others were spending their teen days, Robert Lercher — a consummate wisecracker — said BOLD Team hopes in the future to be able to give new names to some of the strains it offers. The strains have been developed over the years by marijuana growers all over the country — people, Lercher said, who must have started the process when they were children “because of the names they gave them.” That would like Bubblegum, Fruity Pebbles and Purple Urkle (strains not necessarily at BOLD Team). Other pot jargon includes , which means pruning the plants so they’ll put more energy into their buds.

“My mother is not going to go to a dispensary … one, she’s close-minded and old school … I love her to death … but she’s not going to go to a dispensary and ask for Mildewed Cat Pee,” Lercher said. “I mean some of the names swear words in them. The single most popular strain in the United States has the F word in it.” That would be Alaskan Thunder Fuck. (There is no strain, to this writer’s knowledge, of Mildewed Cat Pee, yet.)

In the flowering room, a couple of BOLD Team employees were going from plant to plant, off leaves and stems to encourage bloom. (The only leaf parts not thrown away are those with tiny on which resin has crystallized. are used in making hashish.) BOLD Team, which employs 14 people on its team, will hire several more people when it begins to process the plants and additional employees when it begins the packaging process. 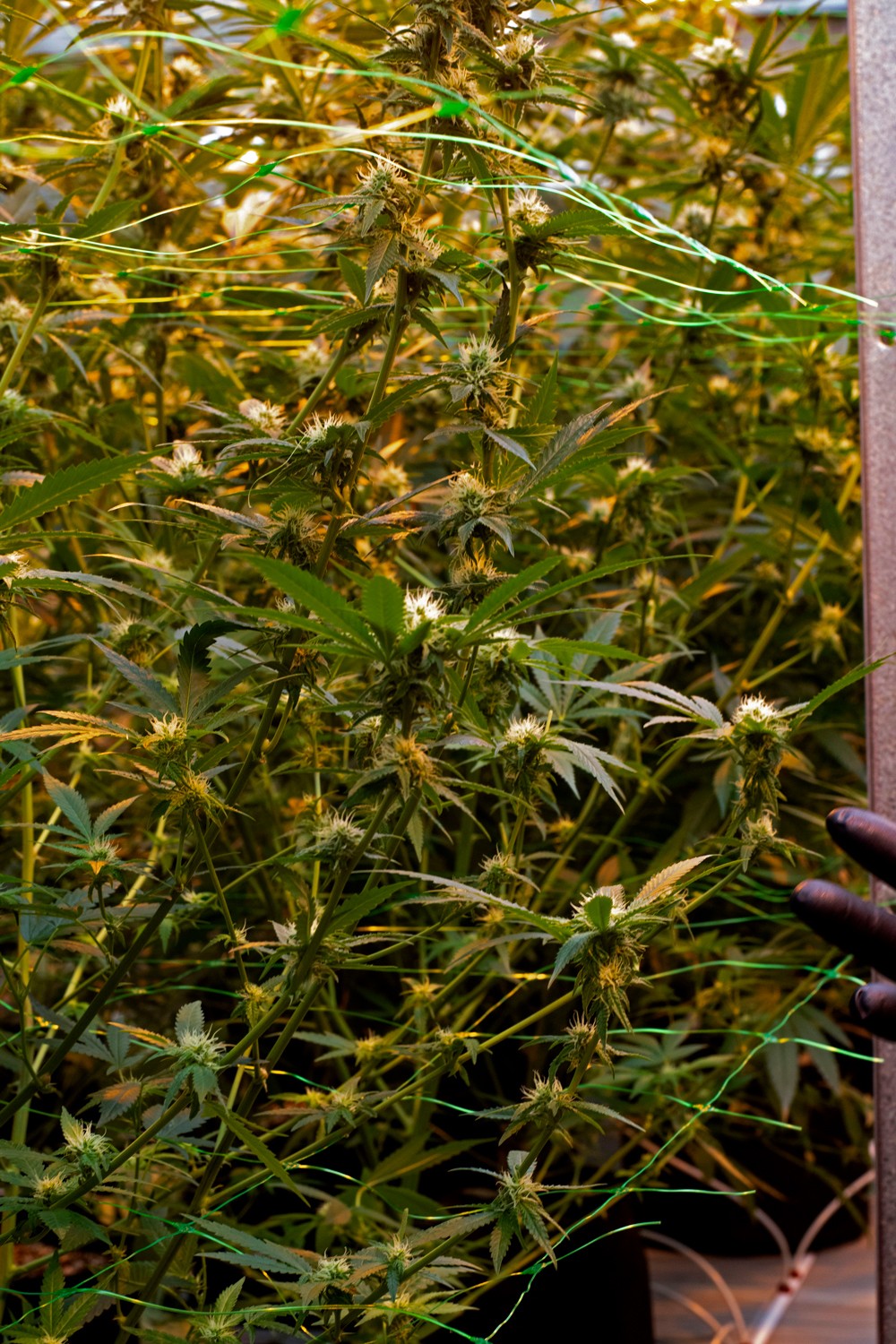 The difference in C. and C. were more pronounced in the room with the most mature plants: Indica grows short and bushy; is taller and skinny. Both species produce THC, the chemical in the plant that causes a “high,” and CBD, which, because it works on different receptors in the body, does not. Lercher said — that is, he’s been told — makes people sleepy, which he remembers by thinking “.” If you’re awakened from an -induced snooze, Lercher said, “You’ll eat your entire refrigerator.”

Pointing to a room of mature plants not yet in bloom, Lercher called it “magic” how fast marijuana grows. He mentioned that the company’s consultants “tell us plants are a lot happier when they are listening to music.” But there is no music playing in the nurseries, and Lercher said it was because … well, what if they don’t like the music chosen? “What if they’re more like Christian Rock plants?” he asked. Perhaps because merely standing among thousands of healthy marijuana plants was having some sort of mind-altering effect, a photographer suggested BOLD Team play “One Toke Over the Line” for the plants in bud. Or Alice in Chains, Lercher said, adding, “It’s a fair assumption they all like Rastafarian music.”

In the flowering rooms are 16 tables with 41 plants each. BOLD Team’s production plan is to harvest 656 plants a week. Those numbers may seem random, but are based on the ratio of plants per tables: Too many, the bunched leaves will block the light and cut down on the flowering; too few, and “you’re shorting yourself,” Lercher said, on what you can produce. “You’ve got to have that perfect canopy.”

As the plants are harvested, the best and brightest baby plants will be selected from about 800 clones in the mother room for moving to the veg room, so that weekly harvest is steady.

If Cotton Plant was counting on a huge workforce at the plant, it will be disappointed. However, Team has committed to giving the city 1 of its gross profits every year. The town, a truly sad spot in Woodruff County, with only a couple of businesses besides the cultivation facility, more empty buildings than occupied ones, and an enormous tire dump, will appreciate that. Drennan declined to put a value on what will produce or when owners expect to break even, saying an estimate would be premature because BOLD Team had not sold anything. Lercher is visiting dispensaries to see what they’ll need and when.

Next up in the race to provide the medical marijuana to Arkansans are Osage Creek Cultivation in Berryville (Carroll County) and Natural State Medicinals’ cultivation facility in White Hall (Jefferson County), both of which were approved by ABC inspectors in March to begin growing operations. Dispensary inspections will begin in April.