The celebrities have made it to Arkansas. Or at least their cannabis brands have.

Cookies, led by its founder Berner, is a well-known brand in the cannabis world. While not associated with any particular A-lister, the Cookies brand has celebrity appeal of its own. Berner’s by Good Day Farm, a dispensary in West Little Rock, sells the state’s widest selection of Cookies cannabis products.

While the celebrities might be familiar to customers, the business arrangements that allow the products to be sold here are not. Because of federal cannabis law, national brands can’t operate like brands in other industries. The workarounds are a bit complicated, but in the end, Arkansas consumers have a chance to purchase cannabis products that carry the stamp of approval of the stars.

How does it work?

Because of federal law, national cannabis brands can’t make products at a single production facility to distribute across the country. Instead, the national brands work with individual cultivators in states where cannabis is legal to produce a product that is sold under the brand’s name and with the brand’s unique packaging and marketing.

The brands can’t be franchises because of the federal cannabis laws, said Sumer Thomas, director of regulatory operations for Canna Advisors in Boulder, Colorado. Instead, the brand uses licensing agreements with cultivators in the states.

So what is that product exactly? It differs from brand to brand. Some brands use their own unique plants (known in the industry as genetics), while others work with local cultivators to pick out the right strain of their own.

For example, imagine Coca-Cola. If someone buys a can of Coke in Little Rock or Las Vegas, they are going to get the same beverage inside the can. But that’s not always the case with cannabis. National brands don’t often license their own genetics for their products. Instead, they work with local cultivators to find a strain of flower that meets the brand’s expectations for quality, THC content, terpenes, effects and more.

So the product you buy in a national brand’s packaging carries that brand’s stamp of approval and meets their expectations, but the products inside the package vary from state to state.

In some cases, as with Cookies, the brand provides its own genetics. That means the product a customer buys inside the package is, generally speaking, the same regardless of where it’s purchased.

“Anytime you harvest plants, it’s not going to be exactly the same,” she said.

Iselin doesn’t see a big difference in whether a brand uses its own genetics or uses a cultivator’s strains that meet the brand’s standards. She works with Cheech and Chong Cannabis and Method Man’s T.I.C.A.L. brand, and neither licenses its own genetics.

But because the products are different in each state, some caution that brands can fall victim to a lack of consistency and quality.

The Cookies brand was introduced to Arkansas in April when Berner’s by Good Day Farm dispensary opened in West Little Rock.

In Arkansas, Cookies works with Good Day Farm, the Jefferson County cultivator that is associated with a larger Good Day group that owns Berner’s by Good Day Farm dispensary and manages dispensaries in Van Buren and Texarkana.

Cookies was founded by rapper Berner and “grow expert Jai’’ in San Francisco, and has grown into a force in the industry. Berner, whose real name is Anthony Milam Jr., said he turned down an offer of mostly stocks equal to $800 million for the company in the early stages. Now, he says the company is worth more than $1 billion. If true, it would be the first legal billion-dollar cannabis brand, Business Insider reports.

BOLD Cultivation of Cotton Plant introduced the first celebrity brand to the state in February when it brought Cheech and Chong Cannabis Company on board. If you’re reading this story, surely you know Tommy Chong and Richard “Cheech” Marin, the marijuana-inspired comedy duo that rose to fame with movies like “Up in Smoke” and “Still Smokin’” in the ’70s and ’80s.

Chong and Marin each previously launched their own cannabis brands before starting the Cheech and Chong Cannabis Company together.

In Arkansas, BOLD is producing the brands Tommy Chong Cannabis and Cheech and Chong’s. Marin’s brand, called Cheech’s Private Stash, is not sold in Arkansas.

Cheech and Chong Cannabis Company does not provide its own genetics. Instead, Iselin worked with the company to find the right strains for the brands in Arkansas.

In Arkansas, the Cheech and Chong strains are Panama Red, Hash Plant and Acapulco Gold. The Cheech and Chong brand gets the premium nugs of these three strains, while smaller nugs are sold at a lower price point as Tommy Chong’s Cannabis. 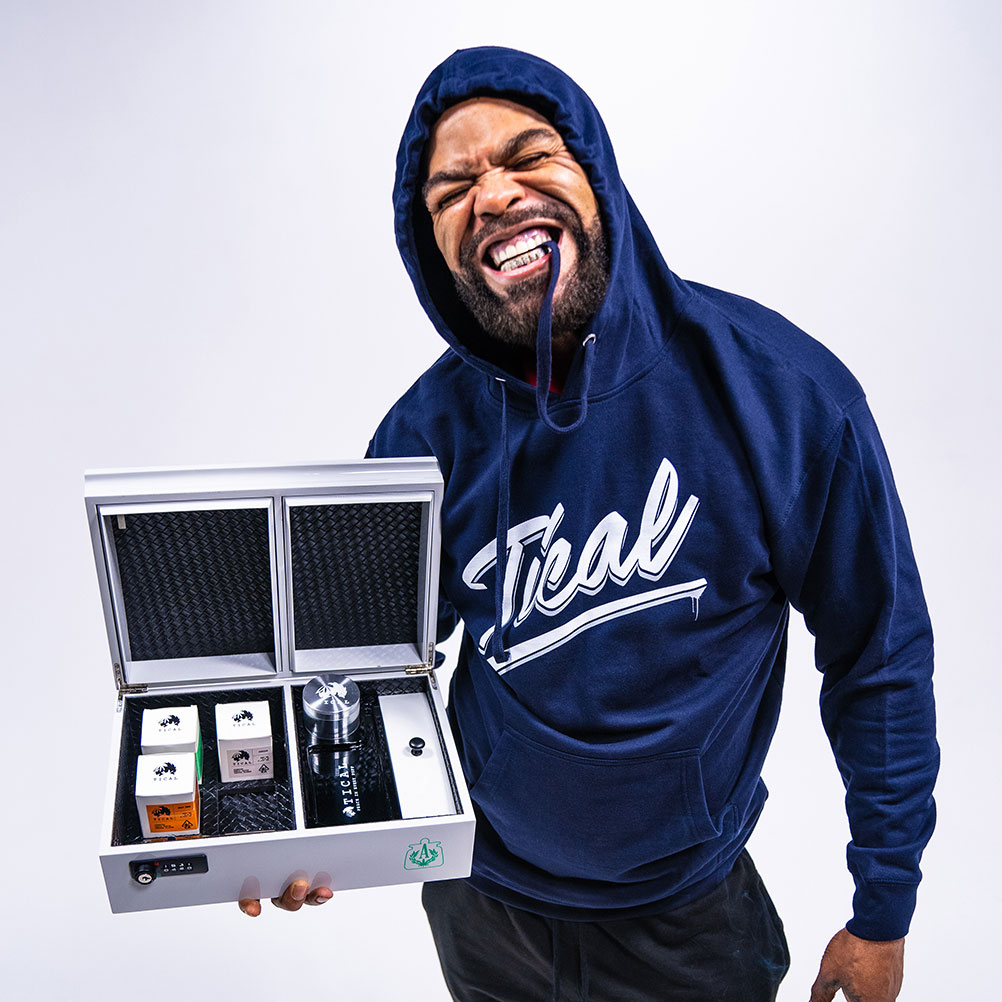 FAME MEETS FLOWER: Celebrity strains, such as T.I.C.A.L. from rapper Method Man, are produced and sold in Arkansas.

The newest celebrity brand to hit Arkansas shelves is T.I.C.A.L. from rapper Method Man, named Clifford Smith Jr., of the famous New York rap group Wu-Tang Clan. The brand, which stands for Taking Into Consideration All Lives, was started by the rapper and actor in 2020.

BOLD launched T.I.C.A.L. in May with the Heavy C.R.E.A.M. strain, a 25% THC strain that Weed Maps describes as relaxed and euphoric. BOLD launched a second T.I.C.A.L. strain in July called Glueball, a 27% THC indica-dominant hybrid strain.

T.I.C.A.L., pronounced tih-KAL, does not license its own genetics. Iselin worked with T.I.C.A.L. executives to match the right strains for the Arkansas market while meeting all of the company’s standards.

“We have parameters [with T.I.C.A.L.] regarding THC level, regarding how many nugs can be in an eighth jar, because they want to be known as premium,” Iselin said.

While some brands are well-known and highly successful, one industry expert says not to make assumptions about the success of brands in new markets.

Michael Werner, senior business development manager at Canna Advisors, said cannabis consumption should not be oversimplified. Just because a brand is successful in one part of the country doesn’t mean it will be successful elsewhere, he said.

For example, he said, people drink wine in Sonoma, California, beer in suburban blue-collar Chicago and cocktails in Manhattan.

“It’s all alcohol but very different cultures and vibes and approaches,” he said. “You can’t just say, “Oh wow. Cookies is incredibly recognizable, it’s going to kill it in New York. It might, but you can’t just assume that.”

Addison Aquino, a budtender at CROP dispensary in Jonesboro, said the customers he’s seen don’t really know who Berner is but they are familiar with Method Man and Cheech and Chong.

“Everyone pretty much knows Cheech and Chong,” he said.

Aquino said the celebrity brands are more expensive and that the cheaper, noncelebrity strains coming from Arkansas cultivation facilities are good and affordable.

“The celebrity strains are kind of on par with everyone else,” he said. “You get a cool package, though. I’m sure that’s part of it for some people.”