Zach Hager had never used marijuana before his best friend suggested it might help him find some relief from the stress in life a few years ago. Today, Hager, 29, is a keyholder at The Source dispensary in Rogers where he answers questions and makes sure things are running smoothly. Hager has become an ambassador for cannabis, promoting the plant’s benefits to others who might find relief like he did.

I basically act as a liaison between management and the employees on the floor. Along with the other keyholders, we basically plug the holes in the ship. We just kind of keep things functioning as well as they can. Say an employee needs something, they’ll come to us and we’re typically the first ones to respond to it. If we run out of a product on the floor, we’ll be the ones to go and grab that real quick and make sure things stay stocked and things stay running smoothly.

What drew you into working as a budtender and working in this industry?

Around the time that I was thinking about getting out of the food service industry and exploring some other things, it was a pretty stressful time in my life. I had my grandparents both pass away in a short period of time. So, depression was a big issue for me, like not eating, a whole bunch of weight loss, that kind of stuff. My closest friend actually introduced me to cannabis. He’s like, “It seems like you’re having a real hard time lately. Come over, hang out for a minute and let’s smoke a little bit.” I was hesitant because I had never used cannabis before, but I went over there to hang out with him. This guy is my absolute best friend in the world, so I knew he wouldn’t steer me wrong. I just took a few puffs and the stress and anxiety and my pain just kind of melted away. And, for the first time in what felt like months, I felt I could actually just relax. For the first time in a while, I actually laughed, too. So, at that point I just thought, maybe the cannabis path was right for me.

With your mom working in traditional health care as a nurse, what’s been her reaction to you working in the cannabis industry?

Initially, she was a little skeptical, but the more I talked with her about it and the more I was able to educate her about the benefits of cannabis without all the addictions and things like that, the more she’s come around to it. She grew up in the seventies, so she was not a stranger to it by any means, I imagine. I basically explained it to her in a way that made sense to her that my desire was to help people as she helps people. She’s instilled that nature in me for my entire life of the importance of helping people and she’s been a nurse for so long. I had presented it in a way that shows I’m helping people with this, I’m trying to keep people off of painkillers, trying to provide a more natural remedy. She is definitely on board with it now and she’s even been doing her own research. She’s got her own medical card now, too. I’m glad that I was able to essentially erase a little bit of that stigma that she originally had about cannabis.

GOOD BUDTENDERS: Zach Hager said good budtenders are good at speaking with people and have a good knowledge of the products. (Photo by Brian Chilson)

What makes a good budtender?

You just have to know how to talk to people and have a great knowledge of the product that you are trying to sell to people because at the end of the day it’s not just about selling it to make a buck. It’s about legitimately wanting and desiring to help somebody. You have to have the ability to work with people as well who are having difficulty explaining what they need. There are some people that just say, “I just want to sleep at night,” and there are so many things that are going to help you sleep and there are so many things that are going to do the exact opposite. You need a good knowledge of the products and what cannabis does and what terpenes do and all sorts of different things like that.

Do you get a lot of customers looking for the highest THC and what do you tell those customers?

Typically, there are people that are going to be after that highest THC and that’s OK. A lot of our customers are very experienced. They’ve been smoking for a long time. When it comes down to searching for the highest THC, I respect that, but if the person is thinking that’s going to be the only thing that matters, I’m gonna try to impart a little wisdom on them and tell them that it’s certainly not the only thing that matters. I’ve had some 27-28% flower that has done absolutely nothing for me but make me anxious. But then I’ve had some 11% that has just made me the happiest I’ve been in days, that just feels nice and heady, very happy, very euphoric. It is a combination of a lot of things, not just the THC. You have minor traces of CBD in some flower as well, which works really well in tandem with THC. You’ve also got different terpenes. 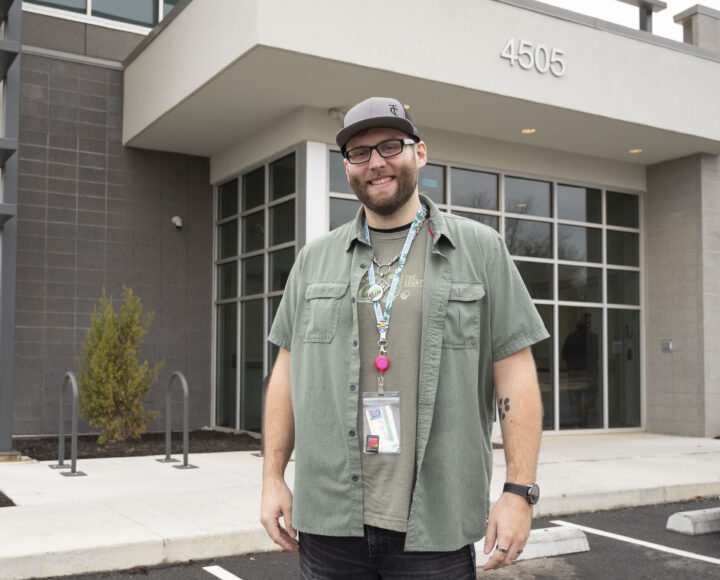 FLOWER AND EDIBLES: Zach Hager said his store has nearly 100 strains of flower as well as edibles, including troches which he said taste bad but work well (Photo by Brian Chilson)

So what are the popular strains these days?

I know a lot of sativas have been really popular lately, specifically things like Green Crack and Jack Herer. Sativas are often very popular. There are so many strains. I cannot emphasize that enough. At one point up at The Source, we had something like 85 to 90 different strains of flower just in free weight that was available by the gram. It can be up to like 110 different strains sometimes that we can have. Another popular strain is Cluster Bomb. That one is a really great one. Sour diesel, that one’s definitely really really good. That one is one of the most popular and, of course, Pineapple Express, that famous movie strain is hands-down one of the most popular and for a good reason. It’s a phenomenal strain, real real good for positive energy and real good for happiness.

What are some of the other products like edibles that have been popular?

When it comes to edibles, there’s something for everybody. There’s chocolates. There’s gummies. There’s hard candies too that are just like little mints and stuff. You have some fruity hard candies as well. There are also these things called troches. They’re basically these little melt-in-your-mouth mints that taste something awful, but, man, do they work. They’re absolutely wonderful for sleep and just relaxing at the end of the day if you can get past the taste of them.  For people who are a little bit more sensitive to the taste, there’s always the fantastically made chocolates and gummies that are made using real sugar and real fruit as well.

Do you guys still get some new patients in the store and what advice do you have for new patients?

New patients are a daily thing for us. There are actually a few things that I think are very important to know. The first thing is to understand the rules and regulations surrounding medical cannabis, just like the laws for anything else like alcohol and tobacco. Just familiarize yourself with those laws and don’t be intimidated by them. They’re very easy to abide by. As long as you are using in a comfortable and safe place and private place and not smoking in public, you’ll be just fine. Another thing is don’t be discouraged if you try something and it doesn’t work for you or maybe it doesn’t give you the desired effect, because there’s something out there for everybody. Just keep a notebook of those products you have tried and your experiences with it.

This interview has been edited for length and clarity.