One hundred and forty-five years ago, the 15th Amendment to the U.S. Constitution was ratified, guaranteeing equal votes to all men regardless of “race, color, or previous condition of servitude.” Fifty years ago, the Voting Rights Act of 1965 was passed by Congress to try to make the 15th Amendment’s guarantee, which had often been circumvented or ignored altogether in the intervening years, a reality. Today, the struggle for voting rights and African-American political representation continues. The unfolding story of black enfranchisement and disfranchisement has profoundly shaped Arkansas history.

Even before African-Americans received the 15th Amendment right to vote, black Arkansans were being elected to the state legislature. Just three years after the abolition of slavery, in 1868, six black men served. Between 1868 and 1893, a total of 84 blacks were elected: six in the Senate, 74 in the House and four in both chambers. They were drawn mainly from the ranks of the black professional class who worked as lawyers, merchants, ministers, educators and landed farmers. Most came from areas of the Arkansas Delta heavily populated by blacks.

Twenty-five continuous years of black representation in Arkansas politics came to a screeching halt in 1893. After the last black legislator left the General Assembly that year, it would be 80 years before the next arrived. The emergence of Jim Crow laws and disfranchisement measures sidelined blacks from mainstream society and politics.

The election law of 1891 began the process of black disfranchisement in Arkansas. Although passed with the intention of combating electoral fraud in the state, its measures proved disastrous for black political participation. The law centralized the electoral system and put it under the control of the white supremacist Democratic Party. A secret ballot and a standardized ballot paper required by the act appeared innocuous enough, but it essentially introduced a form of literacy test. At the time, over a quarter of the population in the state could not read or write, including 93,090 whites and 116,665 blacks.

In 1892, the first election governed by the new rules, voters passed a poll tax amendment. By requiring the purchase of a poll tax receipt, many poorer Arkansans, black and white, were excluded from the electoral process. Because of the combined measures, the vote just two years later, in the 1894 elections, was a third lower than in the 1890 elections, a drop of around 65,000 people.

Some blacks continued to demand a political voice in the state. In the Democratic Party, black voters cast ballots in primary elections to influence the outcome of elections. In response, in the late 19th and early 20th century all-white party primaries were introduced that banned black voters from the polls. Democrats claimed that their primaries were private party elections and therefore not subject to state and federal laws.

Black attempts to have a say in the Republican Party fared little better. Most black voters and politicians gravitated toward the Republicans after the Civil War as the party of President Abraham Lincoln, the party of emancipation, and the party that had defeated slaveholding Southerners. Republicans actively courted blacks during Reconstruction to help shore up their control over the region. But as the Democratic Party regained power and disfranchised black voters, blacks became of little use to the Republican Party. Instead, lily-white Republicans tried to kick blacks out of their party in an effort to appeal to white voters. Blacks continued to seek to play a role in Republican politics albeit with limited success.

In 1928, blacks launched a new bid to gain a foothold in the Arkansas Democratic Party. That year, Little Rock physician Dr. John Marshall Robinson founded the Arkansas Negro Democratic Association (ANDA). The association’s first move was to sue the party for the right to vote in its primaries. Although temporarily successful in doing so, a number of legal maneuvers ended when the U.S. Supreme Court declined to hear the case. Shortly after, the onset of the Great Depression curtailed black political organizing efforts as the focus shifted to economic survival. Nationwide, the election of 1936 saw a decisive swing of black voters away from Republicans to Democrats. Black voters decided that President Franklin D. Roosevelt’s proactive federal response to managing the social and economic challenges that the country faced served their interests better.

The next push for black voting rights in Arkansas came from young Pine Bluff lawyer William Harold Flowers. In 1940, Flowers formed the Committee on Negro Organizations (CNO). Though a staunch Republican, Flowers insisted there should be a nonpartisan push to register black voters. He stumped the state making appeals to black business, civic, religious, political and fraternal organizations to use the vote as leverage for civil rights demands. The number of black registered voters grew from 1.5 percent in 1940 to 17.3 percent in 1947. Flowers was instrumental in establishing the Arkansas State Conference of the National Association for the Advancement of Colored People branches in 1945.

After World War II, more new black political groups sprouted in the state. In Little Rock, returning black veterans under the leadership of Charles Bussey (who in 1981 became the city’s first black mayor) formed the Veterans’ Good Government Association (VGGA). Jeffery Hawkins formed the East End Civic League (EECL) to fight for improvements in impoverished black neighborhoods, becoming the unofficial “Mayor of the East End” for decades after. Such groups looked to capitalize on a growing black political consciousness and opportunities in the city, state and nation.

One important national breakthrough was the U.S. Supreme Court’s ruling in Smith v. Allwright (1944) that outlawed all-white party primaries. Initially, attempting to evade the law, the Arkansas Democratic Party set up a “double primary” system to run city and state primaries excluding blacks, and separate federal primaries with segregated ballot boxes. It quickly collapsed due to its expense and complexity. The election of reformist governor Sid McMath in 1948 paved the way for blacks to be accepted as full party members in 1950. A new leadership under I.S. McClinton and the Arkansas Democratic Voters Association (ADVA) shaped African-American efforts to establish a voice in the party. McMath’s protege, Gov. Orval Faubus, appointed the first blacks to the Democratic State Committee in the 1950s.

The 1960s transformed voting rights in Arkansas. Different groups worked independently and sometimes together to modernize state politics. Pine Bluff attorney Wiley Branton ran the Southern Regional Council’s Voter Education Project (VEP) efforts from Atlanta. In the state, Ozell Sutton headed up the Arkansas Voter Project (AVP). The Student Nonviolent Coordinating Committee (SNCC) added impetus to grassroots political mobilization with various community-based projects. A coalition of progressive groups, including unions, campaigned to get rid of the poll tax in Arkansas. In 1964, the 24th Amendment to the U.S. Constitution abolished the use of poll taxes in federal elections. The same year, Arkansas abolished the poll tax in city and state elections and adopted a free permanent personal voter registration system.

In 1966, Winthrop Rockefeller’s successful bid to become Arkansas’s first Republican governor in the 20th century led to his throwing his considerable resources behind black voter registration efforts. In his re-election campaign in 1968, Rockefeller won 88 percent of black votes in Arkansas, bucking the national trend of solidly Democratic black voting patterns. Democrats in the state, learning from the experience, dumped segregationist candidates and began to run more progressive politicians for office who successfully won back the black vote in the state from Republicans. It was under one of these New Democrat governors, Dale Bumpers, that the first redistricting maps were drawn under the provisions of the Voting Rights Act of 1965, creating some majority black districts.

The impact of these changes became fully apparent in the 1970s. In 1972, for the first time in the 20th century, four African-American legislators were elected to the General Assembly, making Arkansas the last Southern state to elect black legislators in modern times. The four were dentist Dr. Jerry Jewell, a former NAACP state president, in the Senate; and optometrist Dr. William H. Townsend, attorney Richard L. Mays and university professor Henry Wilkins III in the House. All four were Democrats who had defeated black Republican candidates. In all, Arkansas boasted 99 black elected officials, the second highest number of any Southern state. Blacks won offices as aldermen, mayors, justices of the peace, school board members, city councilors, city recorders and city clerks. These gains further stimulated black voter registration. By 1976, 94 percent of Arkansas’s voting-age blacks were registered, the highest proportion of any Southern state. 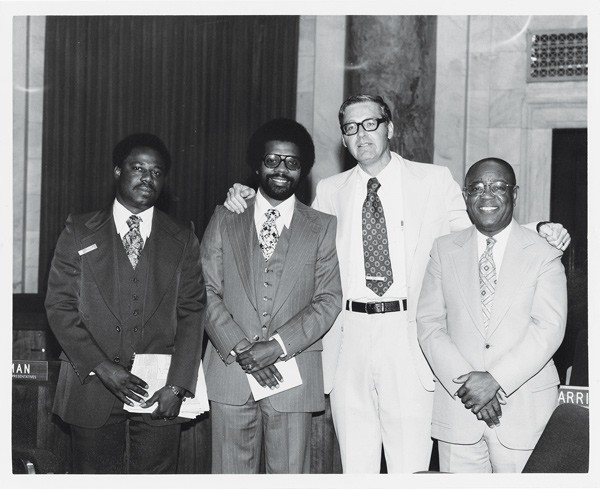 Despite this, black advancement at the state level stalled. There was no expansion beyond the one Senate seat and three House seats until redistricting occurred in 1982, when just one extra house seat was added. This led to the election of the first black woman to the General Assembly, Irma Hunter Brown. A disputed primary election and a court battle in 1988 added another house seat filled by Ben McGee from Crittenden County, the first African American elected outside of Pulaski and Jefferson counties in the 20th century.

A defining court battle came a year later in Jeffers v. Clinton (1989) when a group of black citizens sued the state on the grounds that the 1982 redistricting had diluted black voting strength. A federal court subsequently ordered the creation of two new majority-black Senate districts and seven new majority-black House districts. In 1991, the number of blacks in the General Assembly doubled to 12. The court also placed Arkansas under the preclearance requirements of the Voting Rights Act, meaning that any further changes in voting requirements would have to be approved by the U.S. Justice Department. This earned Arkansas the dubious distinction of being one of only two states, along with New Mexico, to have ever been “bailed-in” to the Voting Rights Act.

The Jeffers ruling had the largest impact on black political representation since Reconstruction. Blacks have added comparatively few seats in redistricting since. The number of blacks in the General Assembly today stands at 16, with four Senate seats and 12 in the House. Blacks have fared even worse in higher elected offices. Arkansas remains to this day the only former Confederate state to have never elected an African-American to a statewide or federal office. 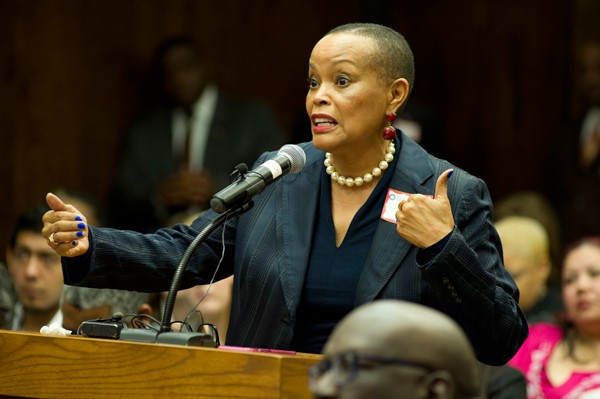 Other opportunities have been few and far between. In 1993, as president pro tempore of the Senate, Dr. Jerry Jewell became governor of Arkansas for all of four days in the absence of Bill Clinton, who was being sworn in as president of the United States, and Lt. Gov. Jim Guy Tucker, who was in Washington to attend the ceremonies. In 2010, Sen. Joyce Elliott (D-Little Rock) became the first black politician chosen by a major party to run for the U.S. House of Representatives in Arkansas. Republican Tim Griffin defeated her in the General Election. In 2012, Rep. Darrin Williams (D-Little Rock) was poised to become the first black speaker of the House only for the Republicans to win the chamber. The 54 seats won by blacks in the General Assembly in the 43 years since 1972 remain far short of the 84 seats won by blacks in just 25 years in the 19th century.

Challenges facing black political representation still abound. A steadily declining black population in the state since 1940 has hindered electoral progress. The courts and Congress are in retreat from ordering measures to advance black political fortunes. Meanwhile, new measures reminiscent of the disfranchising tactics used in the late 19th century are being introduced, such as voter I.D. laws, that threaten black participation along with that of poor whites. The Arkansas Supreme Court struck down the state’s voter I.D. law last year. The conservative Republican ascendency in Arkansas does not augur well, since overwhelmingly after the 19th century most advances in black politics have taken place within and aided by the Democratic Party. The struggle for black voting rights and political representation in Arkansas, as elsewhere, is far from over yet.