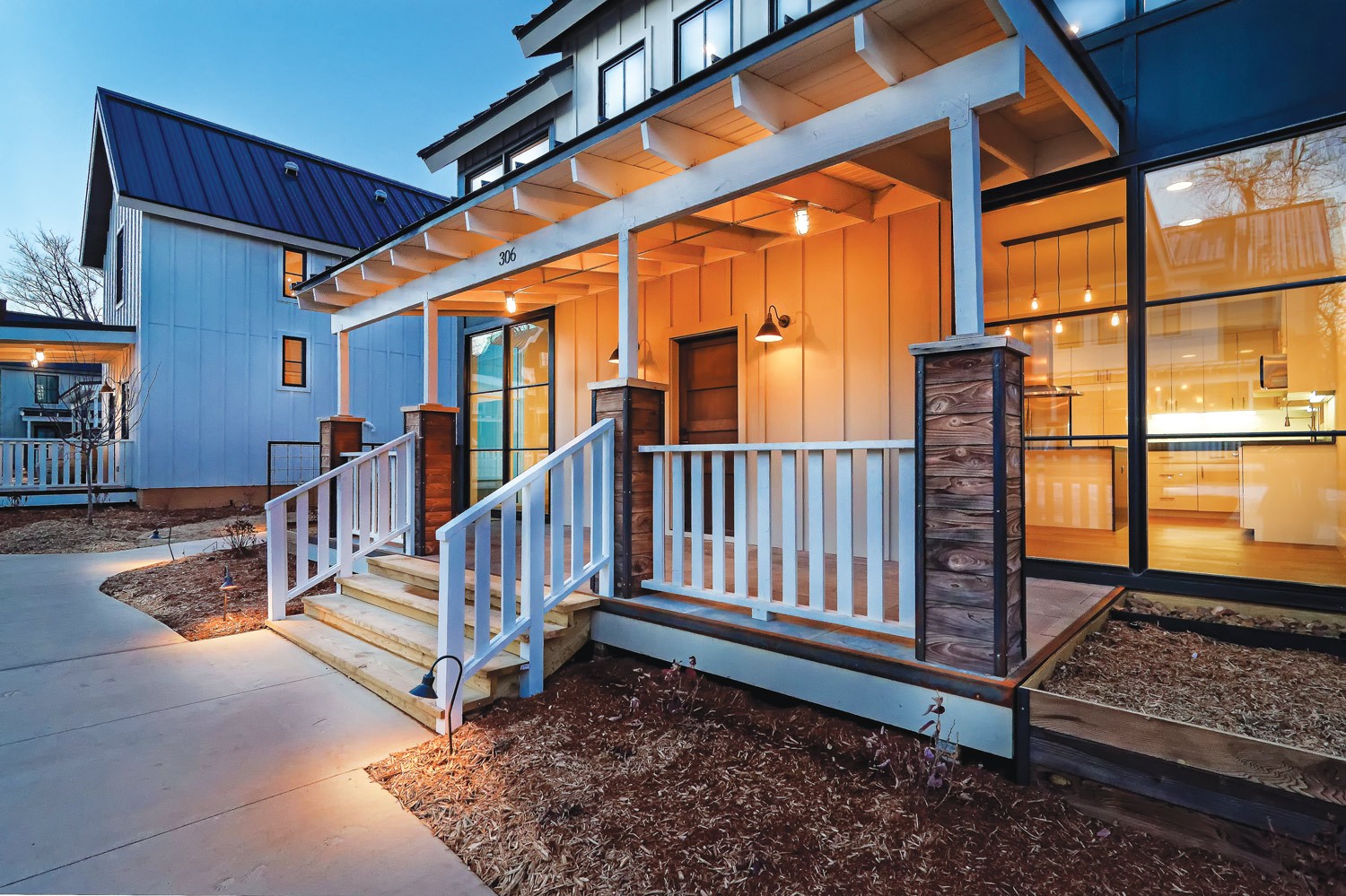 We stole the title of Donald Harington’s excellent novel for this trip because a) it’s about the architecture of Ozark towns and we could not pass up the temptation, and b) like the book, we are looking at residential architecture that, as Harington says, is “bigeminal”: Separate but joined.

The opening page of “Architecture of the Arkansas Ozarks” is illustrated with the residence of an Indian named Fanshaw: two joined beehive-shaped homes crafted from bent timbers and thatch. The architecture of the Ozarks has moved on since then, much of it benefiting from the influence of Arkansas architect E. Fay Jones, his colleagues and his heirs at the University of Arkansas. For this tour, we compare old with new. Entirely concocted by the Arkansas Times and mostly to be conducted from sidewalks or streets because the destinations are private homes, the tour is meant to illustrate commonalities and differences in structures built, in some cases, nearly a century apart. There are, of course, many other outstanding historic and new homes to drive by up on the Ozark Plateau, but this is a start.

E. Fay Jones’ Applegate House, built in 1969 on nearly 17 acres for a couple who liked to entertain, is unlike other Jones designs — such as Thorncrown Chapel — in that it has no right angles. The walls, staircases and landings of the stone-clad home are sinuous, curving this way and that and unimpeded by doorways. The showers are cylinders of stone lit by a skylight; the water comes not from a showerhead, but in sheets off rocks that protrude from the walls. The 8,700-square-foot home includes a kidney-shaped indoor pool. Jump forward 47 years and 7½ miles to the Black Apple Pocket Community in Bentonville, a 1-acre development of 11 houses that hearkens to a time of close-knit living and human-sized homes. The brainchild of Christy Walton, the development’s houses range from what might be called “tiny houses” — 850 square feet, with loft bedrooms — to three-bedroom, 1,800-square-foot homes, all placed around a central lawn featuring a fire pit and corncrib-shaped commons building. GreenSpur architect Mark Turner calls the reclaimed wood-sided, farmhouse-style homes — with plenty of right angles — “modern agrarian.” 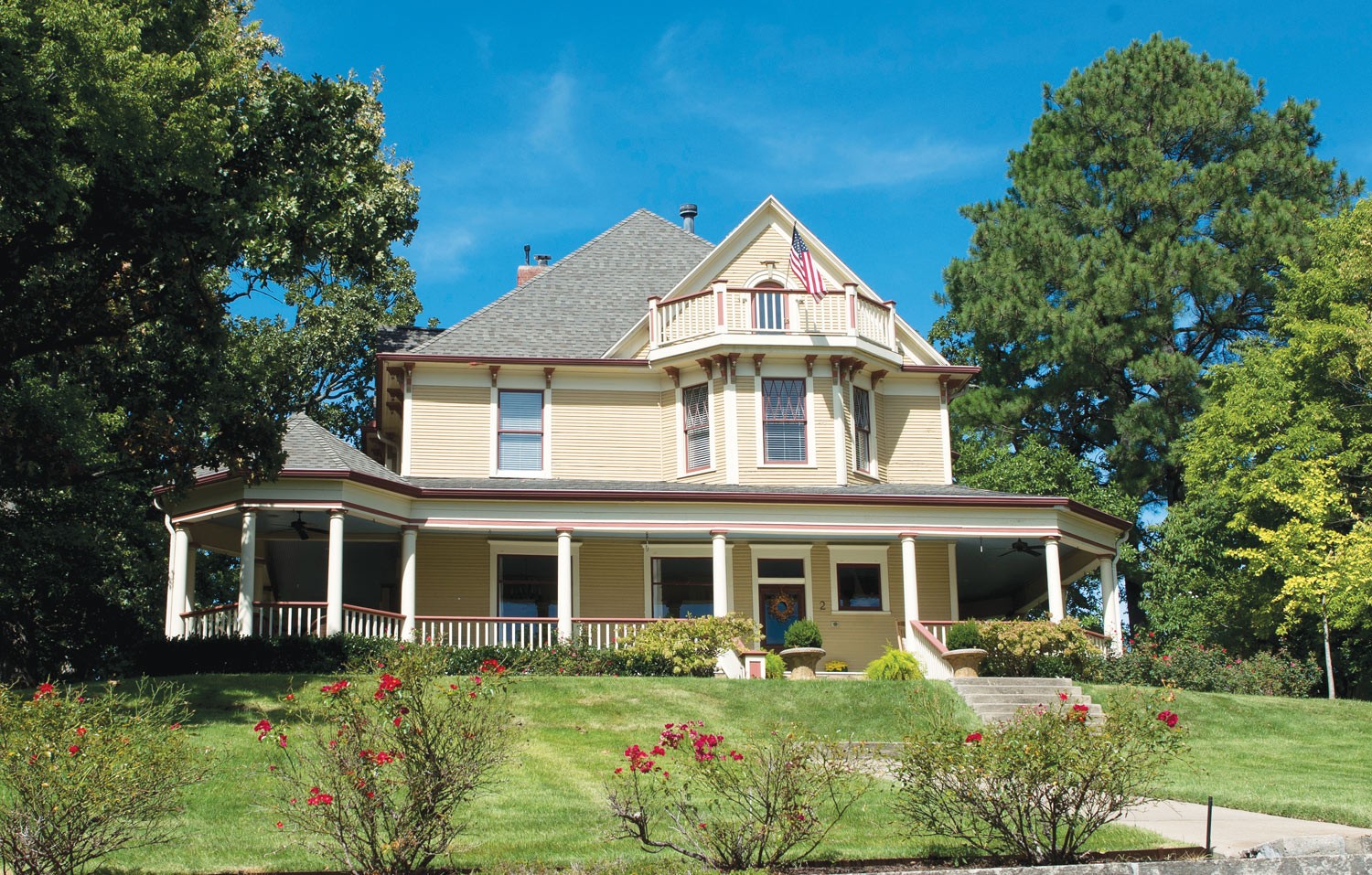 People who build their homes on the tops of mountains are expressing something besides a desire for a good view. High locations, high status. In Fayetteville, the homes on Mount Nord, built between 1901 and 1925, feature grand and varying architectural styles befitting their grand residents, among them J. William Fulbright, who lived at No. 5 Mount Nord in the Mock-Fulbright House, (variously dated as 1901 or 1908, Classical Revival) as a boy. The block, from No. 1 to No. 5 Mount Nord Ave., is on the National Register of Historic Places as a Historic District. Other houses include the Pritchard House (No. 1, circa 1907, Neoclassical), the Bohart-Huntington House (No. 2, circa 1901, early Colonial Revival/Italianate), the Gulley House (No. 3, circa 1905) and the Lawson House (No. 4, circa 1925, Colonial Revival). (Missing is Artemus Wolf’s Arkansas Building, built in St. Louis for the 1904 World’s Fair and dismantled and reassembled on Mount Nord; it was demolished in 1939.) 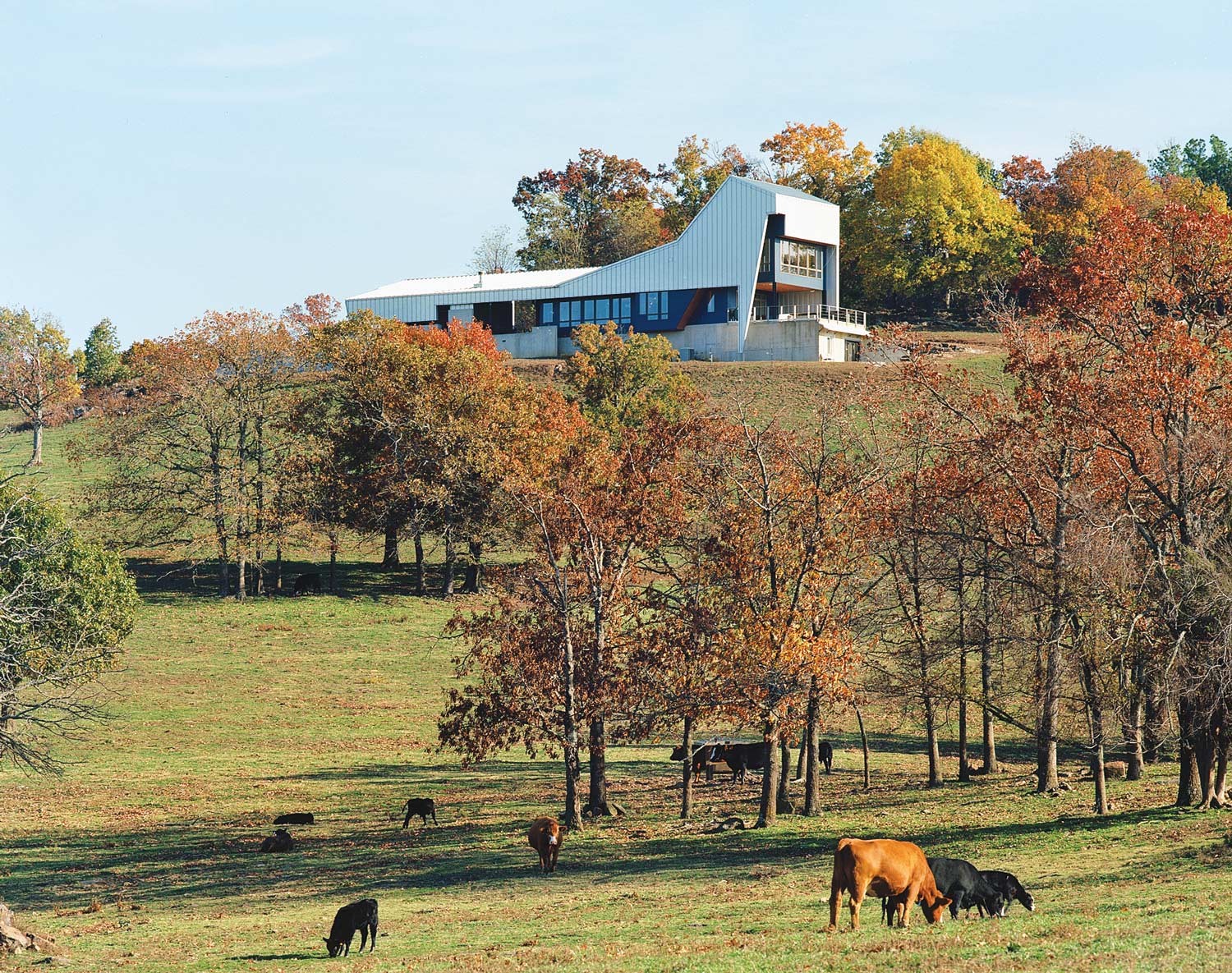 On a hilltop between Goshen and Fayetteville is yet another architectural standout: the Round Mountain House, built for Charles and Sharon Killian in 2010, more than a century after Mount Nord Avenue was developed. It watches over the Ozark Plateau like the Great Sphinx: The three-story “head” of the house has a one-story “lean-to” as its body. The house won the 2012 Vision Award of the Fayetteville Chamber of Commerce and the UA Fay Jones School of Architecture 2013 Alumni Design Award. 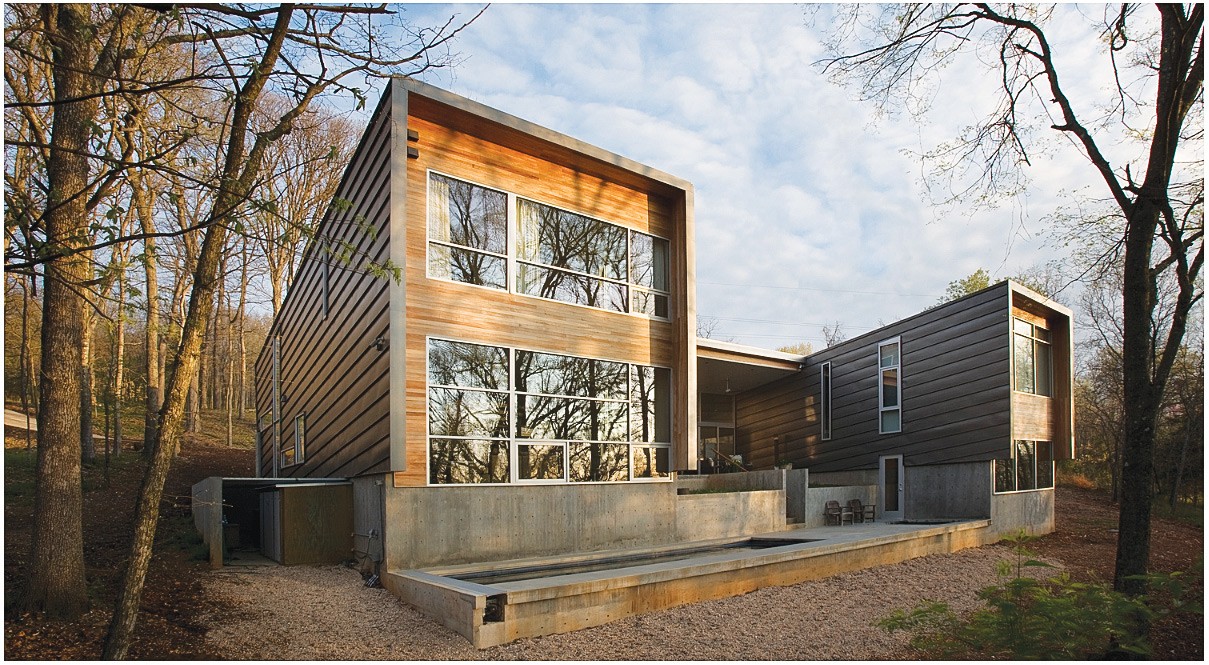 To compare these two houses will require you to drive from Fayetteville to Bentonville, so here’s what to keep in your mind’s eye: wings that project forward from the central portion of the houses. The Italianate Craig-Bryan House, built in 1875, has gabled bay windows protruding on either side of the entrance. A central tower adds to the home’s pleasing asymmetry. The Craig-Bryan also house features iron balconies retrieved from the 1847 Benton County Courthouse that was demolished in the mid-20th century, according to the home’s nomination form for the National Register. 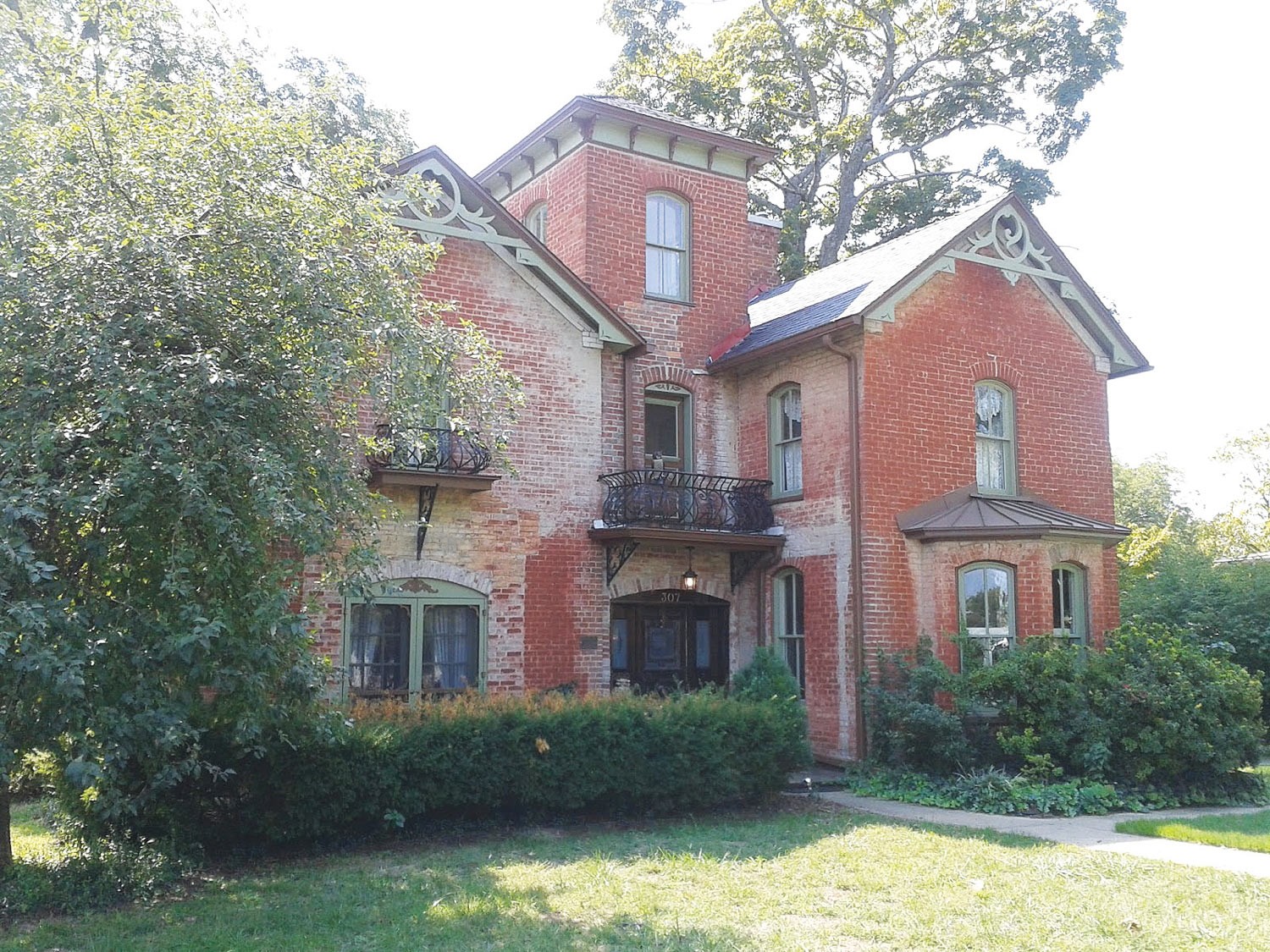 The original builder, James Toliver Craig, was one of Bentonville’s earliest settlers; the Bryan family, who bought the house after Craig’s death in 1895, lived there for more than 70 years. Jump 132 years forward to the Jones Residence, an eclectic, also asymmetrical beauty. The separate wings of the boxy modern masterpiece of glass and wood were designed to accommodate different schedules of the original owners. 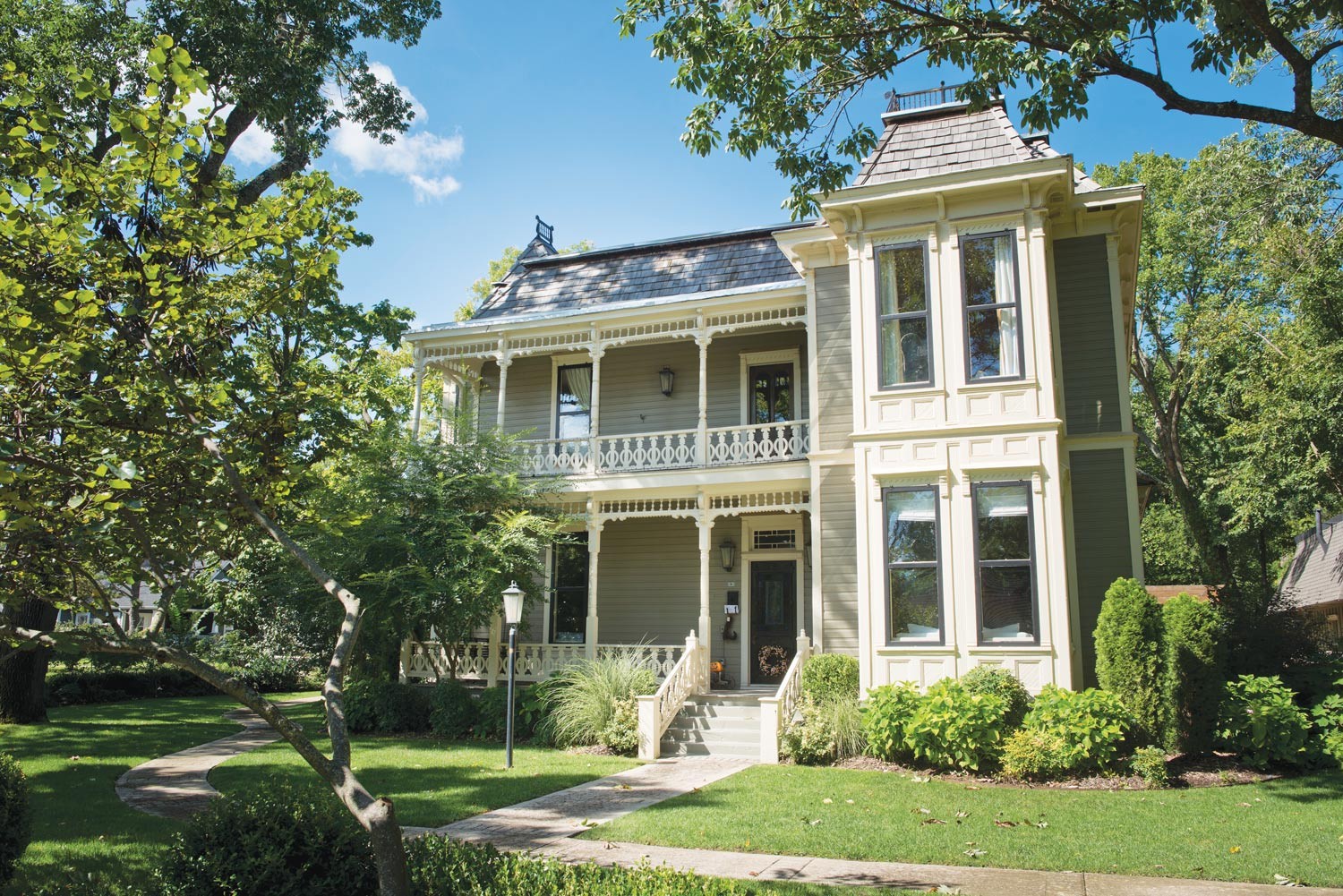 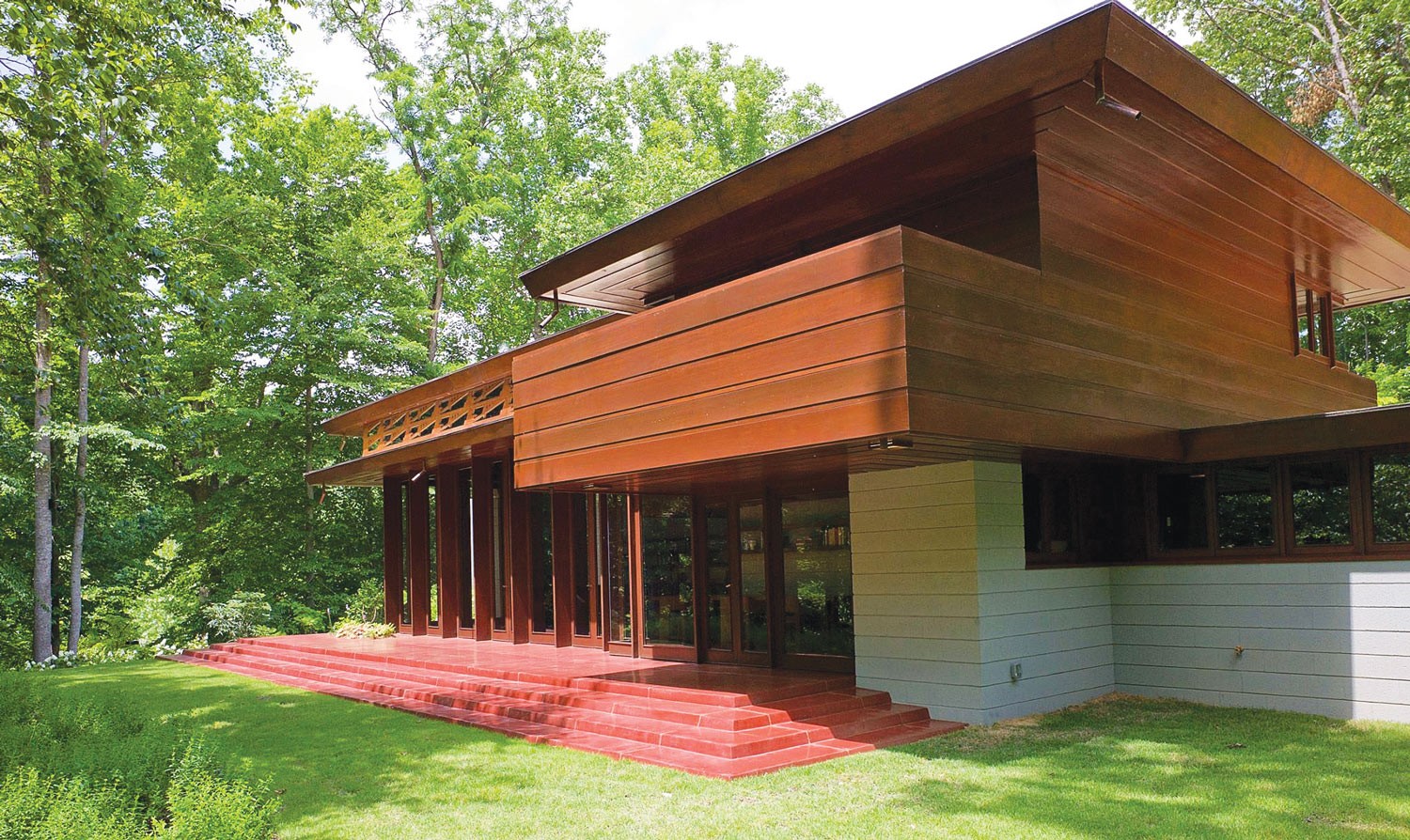 The Rice House, built in 1891 by prominent lawyer Charles A. Rice, is as fussy as the Bachman-Wilson house is straightforward. Yet both rely on woodwork for ornamentation: The Queen Anne/Eastlake-style Rice House has jigsaw-cut brackets as part of the elaborate woodwork on its porches; the 1956 Wilson-Bachman house features hand-cut clerestory windows in a winged-seed design. Both have environmental design elements: The Rice House is a dog-trot, with a central hall running from front to back to allow cool air to pass through; the Bachman-Wilson has overhangs and a cement floor to keep things cool; the floor, which extends to the patio, is heated from below in winter. The two-and-a-half-story stick-built Rice House was built to be a showplace; the Bachman-Wilson concrete-block house (moved to Bentonville from New Jersey) is one of 60 compact “Usonian” houses designed by Wright as affordable middle-class housing. 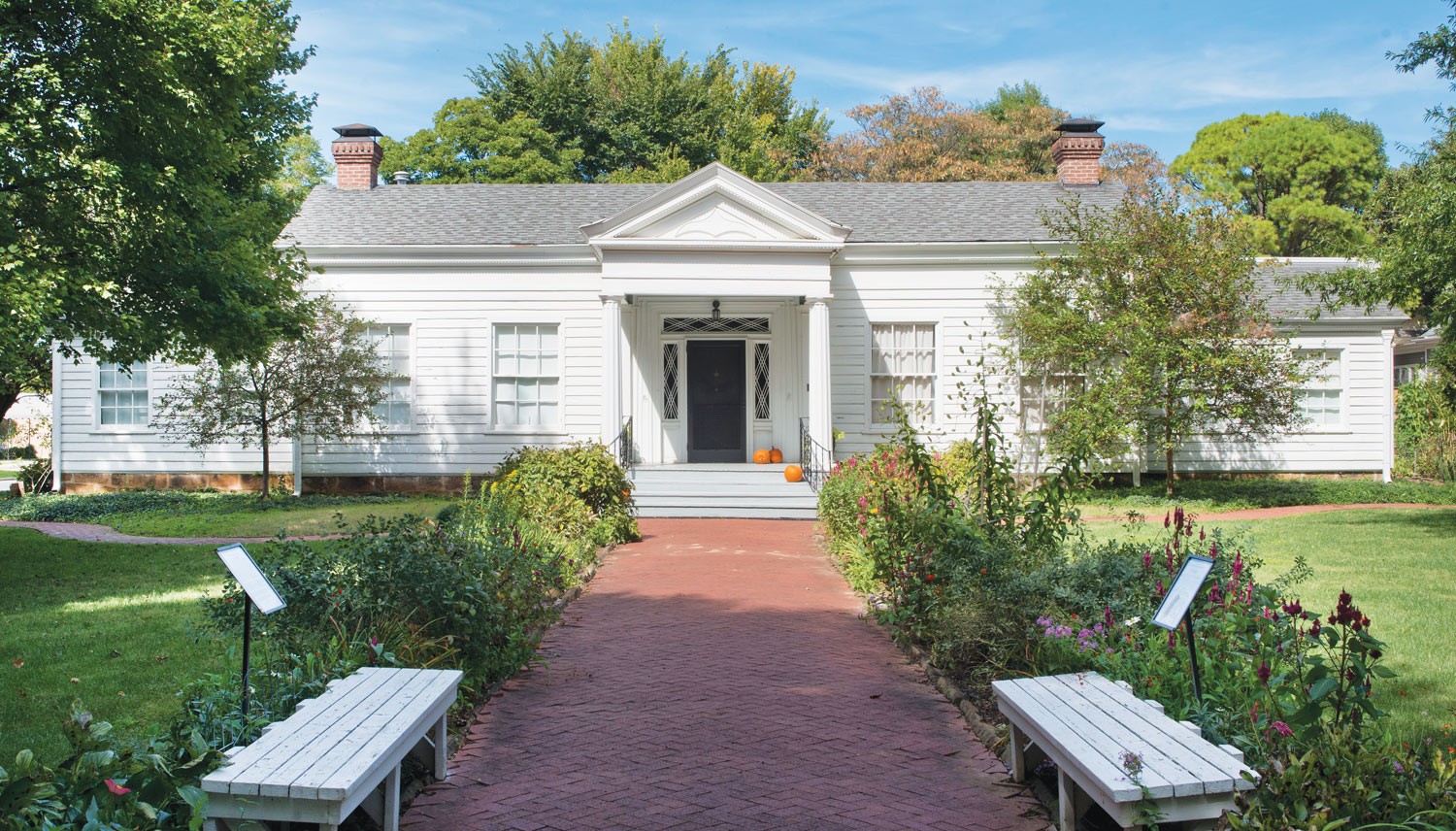 The Headquarters House, a.k.a. the Tebbets House, is a long and low one-story Greek Revival built by a Union sympathizer in 1850. In its later use as a base for Union forces, it was the focus of the Battle of Fayetteville: It was attacked by Confederate troops in 1863, but Union troops stopped their charge on horseback up Dickson Street. (Union sympathizers may want to remind those who ride up and down Dickson with Confederate flags hanging from their trucks that it was a street where the rebels tucked tail and withdrew.) The house, which features fluted columns on the porch, is now a museum. The cannonball that once wrecked its front door is within. 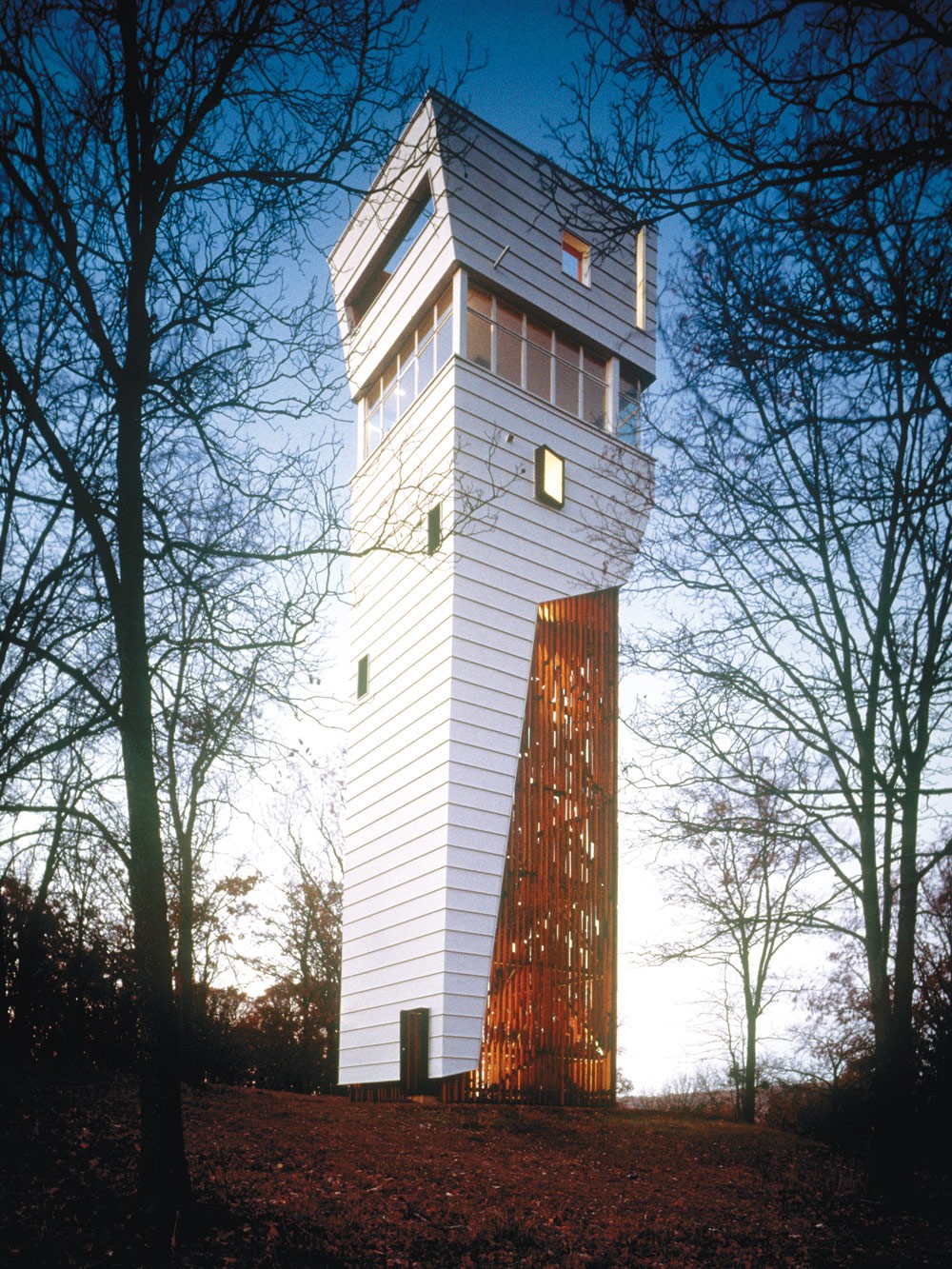 If the Union had had command of the Keenan Tower House, an 82-foot-tall steel and wood-lattice residence built in 2000 that rises above the treetops and features a “skycourt” at the top, they would have known exactly where the Rebs were at all times. The panoramic view from the top of the Tower House — commissioned by James Keenan and sometimes likened to a fire tower (or a far tar, as some say) — is today more peaceful, if more developed; it’s said you can see all the way to Oklahoma.