The Hogs will forever reign supreme up on the hill in Fayetteville — even when the football and basketball teams are in shambles. But say, “Who pig?” and plan your visit on a weekend when there’s not a big game. You might want to bring a bike and use the Razorback Regional Greenway to pedal around town and all the way north to Bentonville. That would help you burn off all the calories you’re going to pile on touring Fayetteville’s fantastic food and bar scene.

Start with a burger in a basement

“Housed in a cellar location straight out of a Beat poem, it’s the kind of place that’ll make even an oldster feel like the clock has been wound back to the glory days the minute you walk in the door,” the Arkansas Times once wrote in a review of Hugo’s (25 1/2 N. Block Ave.), a Fayetteville institution since 1977. Most of the decor appears not to have changed since then. Hugo’s will hopefully forever be a bit dingy. That’s the way we like it. There’s no better place in Fayetteville to grab a burger and a beer. 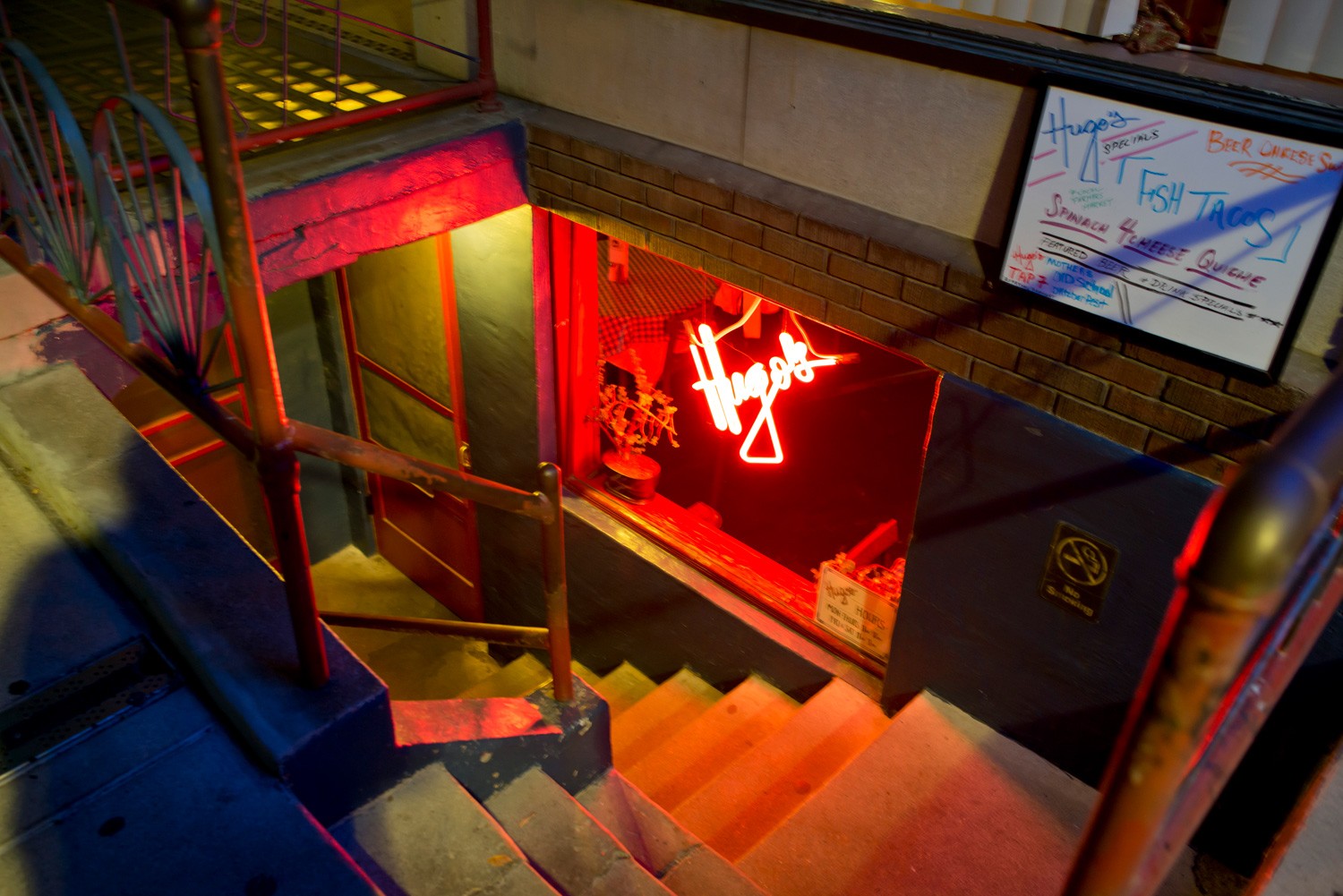 The best book shopping in Arkansas is in Fayetteville. Dickson Street Bookshop (325 W. Dickson St.), where used and out-of-print books are bought and sold (“where good books go to good people” is the store’s motto), is a rabbit warren of literary delights in which bibliophiles can happily lose an hour or two. Nightbird Books (205 W. Dickson St.) sells a smart and broad collection of new books for adults and children. It’s got everything an indie bookstore fan could want: pet birds to admire, an in-store coffee shop and comfy chairs. Block Street Records (17 N. Block Ave.) is the record shop every college town should have now that the kids are buying vinyl again. It’s got a wide selection of obscure as well as popular new and used albums, a knowledgeable staff, and it’s open daily with hours that stretch to 9 p.m. on Friday and Saturday nights.

And Lake Fayetteville and the Botanical Garden of the Ozarks will provide. You didn’t bring a boat, of course, but no worry: Lake Fayetteville will rent you one for its calm, no-wake waters. Or climb back on your mountain bike and check out the surrounding area. The 6.9-mile nature trail is a destination for bird watchers and others who like to walk in the woods, and it goes right by the Botanical Garden. There’s a $7 ticket, but you’ll see 12 themed gardens, a butterfly house and learn about bats or succulents or tea — whatever is being offered in the garden’s educational program.

Grab a drink and some nostalgia

Maxine Miller sits at the head of the table of the Arkansas Bar Hall of Fame (which does not, but should, exist!). As a 24-year-old single woman in 1950, she opened Maxine’s Tap Room at 107 N. Block Ave. For more than 50 years, Miller presided over the smoky shotgun bar, perched on the only green stool in a line of a red ones, sipping coffee and playing dominos, while generations of students stopped in for cold beer, a beloved and a try on an arcade bowling game known as “Ding Ding.” In her later years, Miller sold T-shirts that read, “It was your parents’ bar. Now it’s yours.” When Miller died in 2006, her family kept the bar open, but a fire forced it to close for a year, among other setbacks. But in 2013, the owners of nearby Block Avenue businesses The Little Bread Co., Terra Tots and Hammer & Chisel stepped in to operate the bar. They gave it , stripping out drop ceilings and peeling back some of the –, and introducing a smart, classic cocktail menu. It remains one of the best bars in Arkansas. Bonus points: Former Arkansas Times arts and entertainment editor and professional music nerd Robert Bell often DJs there. 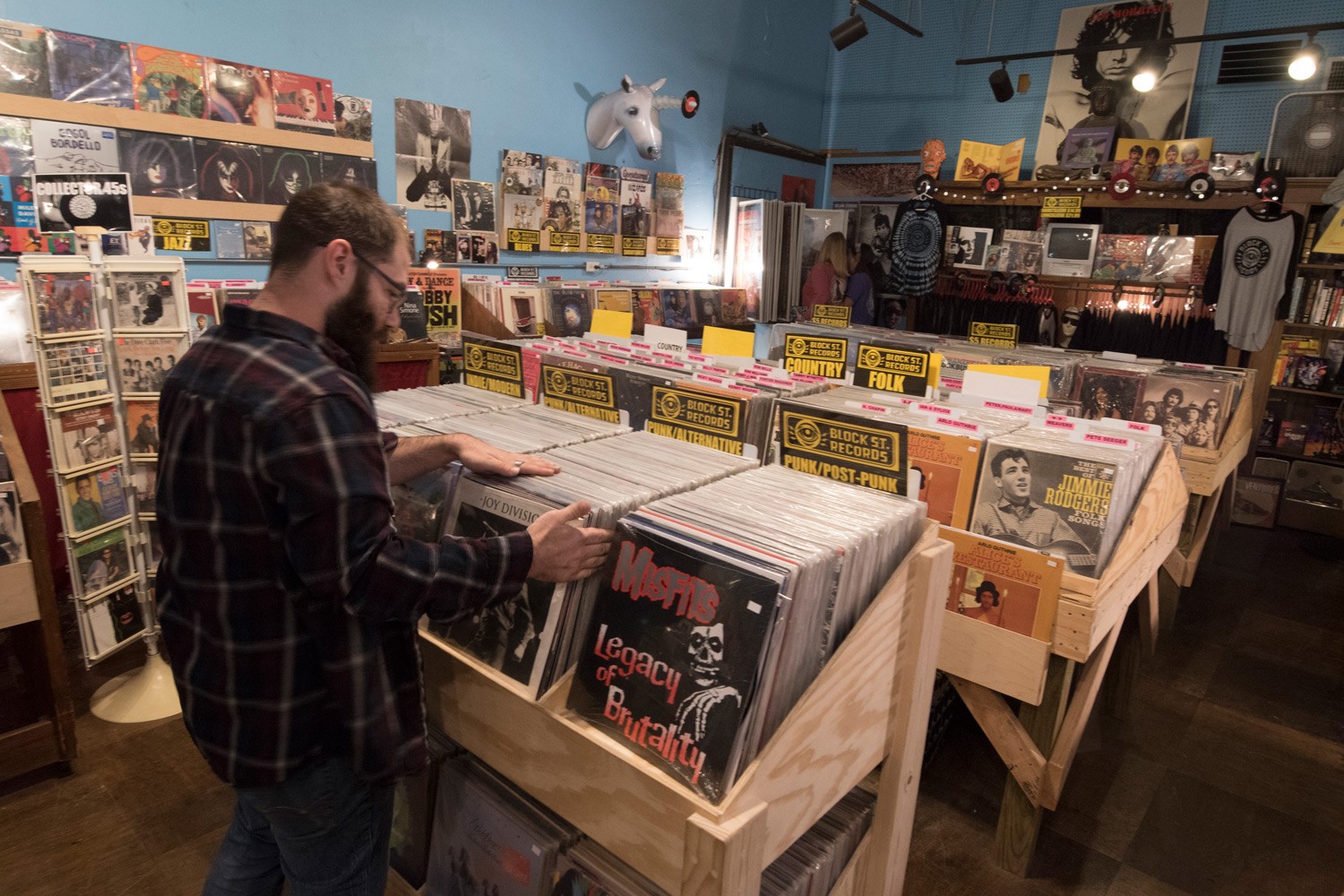 Head south to the Mill District

Restaurateurs Gawthrop and Clayton Suttle have made South Fayetteville a food and drink destination. In 2006, they opened Greenhouse Grille (418 S. School Ave.), a “new American” restaurant that specializes in innovative takes on comfort food and relies heavily on local ingredients. Naturally, it’s vegetarian and , though you can also get beef tenderloin served with bleu cheese butter. In 2014, Gawthrop and Suttle opened Wood Stone Craft Pizza + Bar just to the south of Greenhouse Grille (557 S. School Ave.). It’s a similar formula to Greenhouse, with lots of local ingredients inventively combined, but on pizza cooked in a wood oven. You’ll also find a happening bar scene, with a wide selection of Arkansas craft beers and craft cocktails; boozy root beer and floats, too. Both restaurants are easily accessible for bikers or walkers on the Frisco Trail, part of the Razorback Regional Greenway.

Stay downtown … or on the outskirts

The former Cosmopolitan Hotel underwent a complete redesign and renovation, which included replacing and updating furniture, fixtures, plumbing and electrical systems, before reopening in 2012 as The Chancellor (70 N. East Ave.), a boutique hotel with 92 rooms and 15 suites, modern decor and an affordable price point (rooms start at $99). It’s downtown near the square and within walking distance of campus and many of our recommendations for food, and fun. Or stay at the Inn at the Mill (3906 Johnson Mill Blvd.) just outside of town, in Johnson, near Arvest Park, where the Northwest Arkansas Naturals play. The late Fayetteville architect James Lambeth restored the Johnson Mill, part of which dates back before the Civil War (some of it was burned after the battle of Pea Ridge and reconstructed after the war), in the 1990s and constructed the inn around it. His daughter, Courtney James, and her husband, Miles James, ran it and the restaurant James at the Mill. The Jameses sold the property earlier this year and the new owners plan to turn the restaurant into additional space for lodging. In the meantime, what’s there has been recently renovated.

Grab breakfast or brunch or toast at Arsaga’s

Cary and Cindy Arsaga opened the first location of Arsaga Coffee Co. in 1992. Since then, the Arsaga family has become with coffee in Fayetteville, adding new locations and its own warehouse roastery. In 2012, they transformed a long dilapidated freight train building into what became Arsaga’s at the Depot (548 W. Dickson St.), an all-day restaurant that specializes in crepes, but also does sandwiches, salads, loaded fries and big breakfast plates. It’s got a big outdoor porch that overlooks the Frisco Trail. In 2016, the family opened Arsaga’s Church & Center (200 W. Center), nicknamed “Toast,” because the shop only sells coffee and other drinks and loaded thick-cut toasts — like the Boss Hog (smoked pork, pimento cheese, pickled carrot, parsley and mojo on multigrain bread) or the Toast Shop Crunch (buttered and sugared sourdough topped with sweet maple cream and fresh fruit).

The stomping grounds of E. Fay Jones and Edward Durrell Stone ought to have some architecture to look at, right? Stone designed the Fine Arts Center building on the UA campus, the Sigma Nu house and other buildings. Jones, the famed creator of Thorncrown Chapel in Eureka Springs, who taught at the UA, which named its architecture school for him, designed many of the fabulous mid-century homes you see tucked into Fayetteville’s hills. In fact, Fayetteville is lousy with architectural firms and exciting designs by the , Marlon Blackwell, David McKee firms and others. If it’s old you’re into, Fayetteville has that in spades, too: In 1853, a century before Jones was bringing his version of Prairie-style works to town, Col. Tebbets built his place at 118 E. Dickson St. It’s now the home of the Washington County Historical Society. Even earlier, in 1845, Judge David Walker built a home at 207 Center St.; it’s one of the few properties, like the Col. Tebbets house, to survive the Civil War; now called the Walker-Stone House, it hosts exhibits of fine art. The oldest standing building in Fayetteville is the Ridge House, a portion of which dates to 1830.

Like Fort Smith, Fayetteville has joined the mural movement, with the Green Candy public art project. Check out “Owl” on the east side of the former Mountain Inn building; it’s a three-story work by Puerto Rican artist Alexis Diaz. There’s a timely eclipse mural by Argentinian street artist Marina Zumi on the west side of Hog Haus Brewing Co. And Fayetteville artist Jason Jones is the creator of the gas-masked rabbit at 545 W. Center St.

After you’ve seen what’s outside, go indoors to see what’s on the walls at the Walton Arts Center’s Joy Pratt Markham Gallery. Before the renovation of the UA Fine Arts Center — part of the $120 million, Walton-family-supported School of Art that will be built during the next five years — see what’s up in the gallery there. Ride your bike there; you’ll never find a place to park.

Too much culture for you?

If you like your fun with a big helping of nostalgia, the Arkadia Retrocade (1478 N. College Ave.) is the place to get your fix on Asteroids, Galaga, Donkey Kong and other classic arcade games for one low entry fee.

The restored Carnall Hall, the turn-of-the-century women’s dorm that has been transformed into luxe lodging, has a terrific dark and cozy bar called the Lambeth Lounge. It’s got that swank, intellectual Algonquin Round Table feel. And if you pull a Dorothy Parker and have one too many, no matter: Ella’s Restaurant is Carnall Hall, too, and it’s a white-tablecloth, crab cakes and tenderloin kind of place. 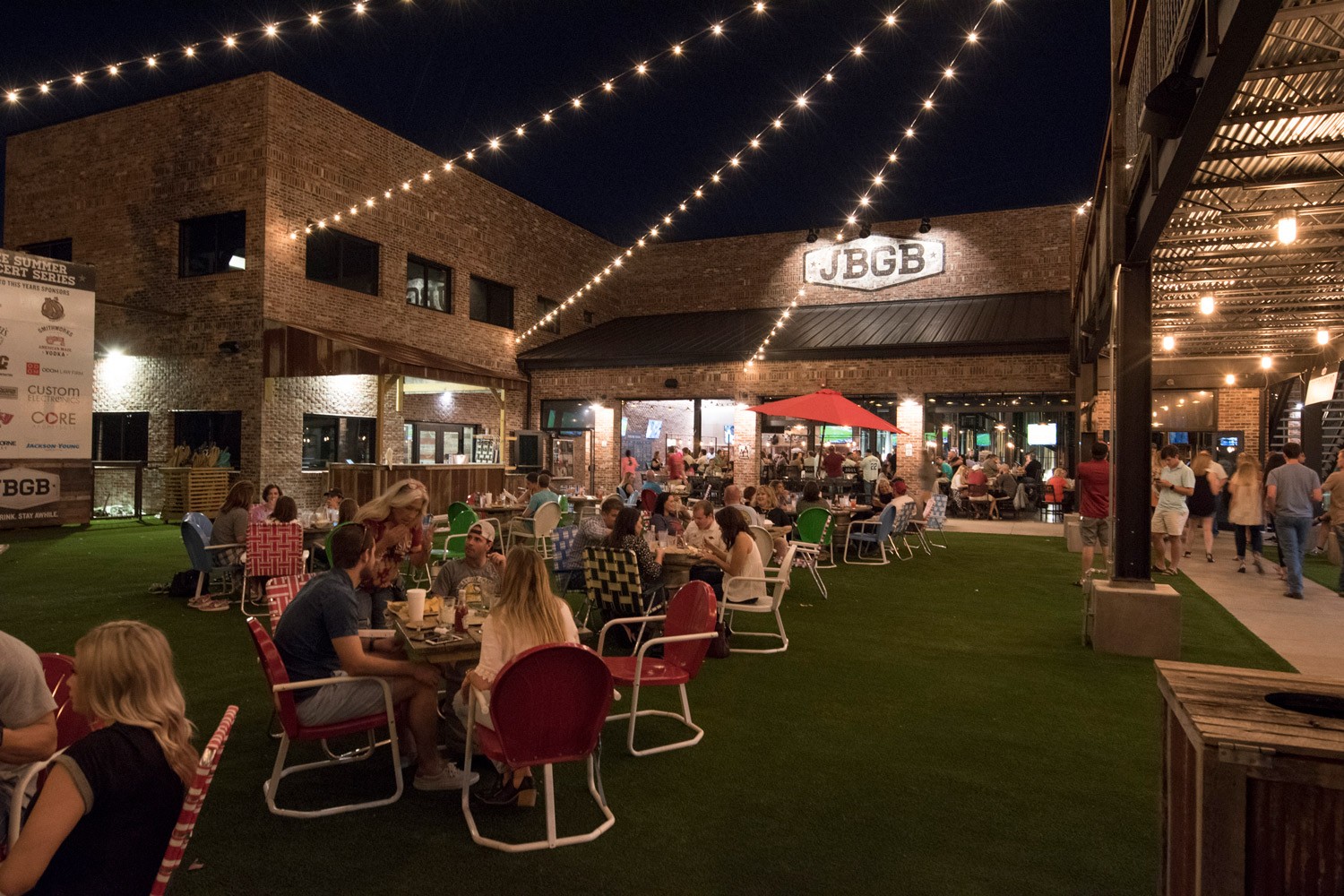 On the other hand, JJ’s Beer Garden & Brewing Co. (3615 N. Steel Blvd.), owned by JJ’s Grill restaurateur Jody Thornton, is a 12,000-square-foot brewpub that has it all: beer brewed on location, a huge menu of pub grub and an outdoor barbecue food truck, and a massive outdoor patio and play area with a 16-by-19-foot TV, shuffleboard, cornhole, ping pong, bocce ball, sand volleyball and even a wading pool. You can imagine that things get a little crazy here on game days.