The two couples sat at the kitchen table and agreed they’d start small. One of those couples, Jack Sundell and Corri Bristow Sundell, had been through it before. In 2011, they opened The Root Cafe, the popular eatery whose claim to fame is a championing of local farmers, producers vendors. They’d watched over time as it grew into its buzz with lines out the door of the small former dairy bar. After several years in business, the couple expanded The Root with converted shipping containers and added nighttime service. Now, they believed, with cautious optimism and a little bit of pride, the business had reached the stage when it could stand on its own and thrive.

So, it was time for a new project: When the beast of entrepreneurship bites once, it often bites again. For the other couple, Cesar Bordón and Adelia Kittrell, it would be a new experience, though Bordón had worked with Sundell for years in The Root’s kitchen, cultivating a mutual respect and a friendship that brought the couples to this kitchen table, where they, both with children under 5 at home, added another child to the mix: Dos Rocas, the new beer and tacos joint at 1220 S. Main St.

The idea was simple. Sundell and Bordón liked grabbing a beer together. They wanted a place to hang out, and Bordón missed food from Paraguay, particularly the street food, the kind that would go perfectly with a Modelo or a margarita after their shifts at The Root. The concept they developed was sort of an indoor food truck that served flavors from Bordón’s native country with a respect for the integrity of ingredients. It would be a spot with the cool, easy comfort of Midtown Billiards and the culinary quality of South on Main. Meaning it would be a perfect fit on the vibrant South Main strip that just keeps growing. 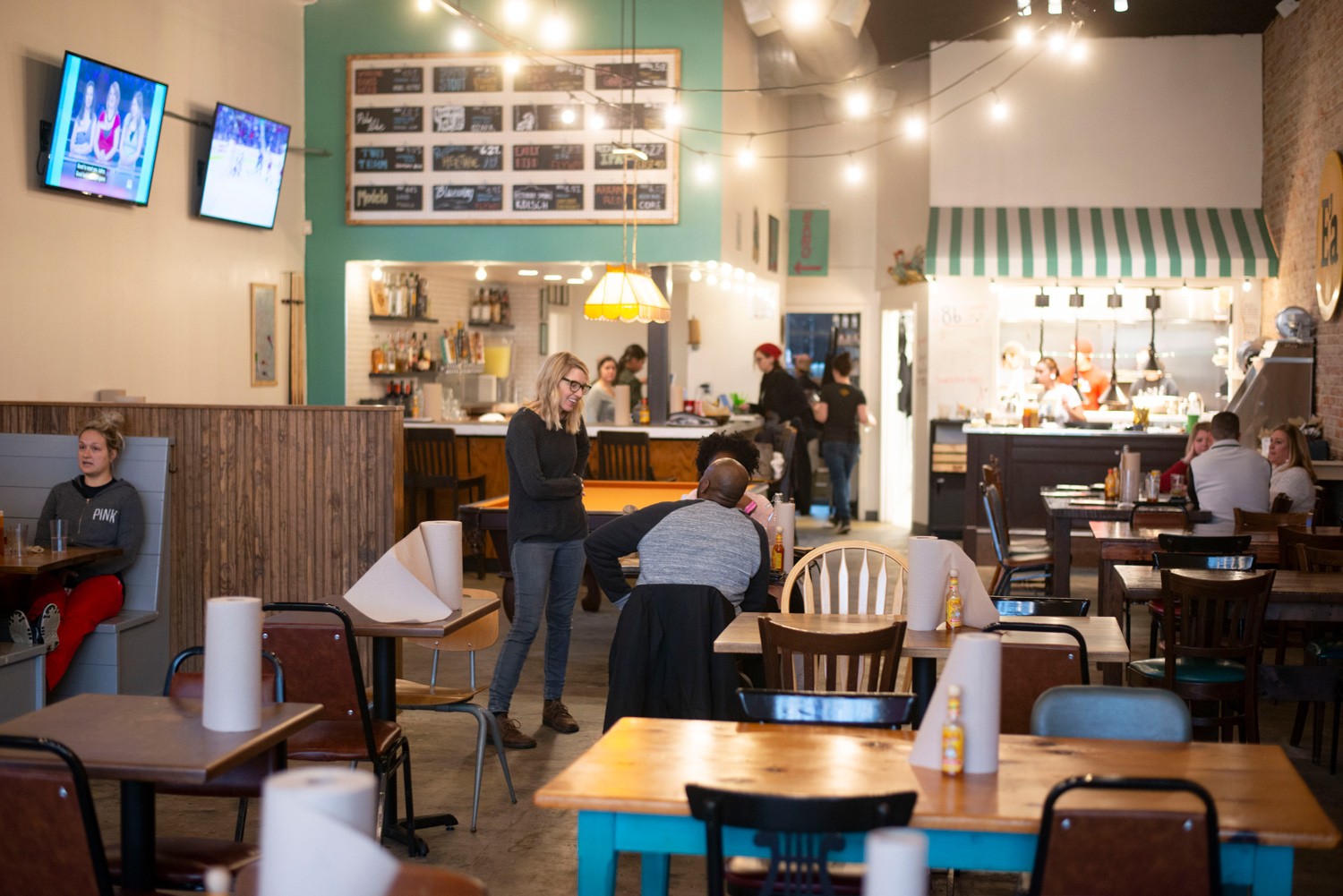 As dreams do, the plan grew into much more than an indoor food truck. Dos Rocas is a restaurant with a full bar, and from the moment the doors opened, the place has been packed.

Their journey here: Sundell’s epiphany came during a college trip to Missoula, when he found himself a repeat visitor to a cafe. He realized that many of his best times when traveling were centered on some sort of restaurant; restaurant as gathering place, restaurant as of a city, restaurant as memory-maker. It was one of those moments when a seed was planted, a seed that ultimately changed the course of his life. Because of that light-bulb moment, Sundell ended up in the restaurant business.

Corri Bristow-Sundell grew up around her grandparents’ homestead in East Texas, where they grew much of what went on the table between their huge garden and a variety of fruit and nut trees. She and her cousins would sell potatoes by the roadside. She eventually met Jack, not through OkCupid or Tinder, but through the Arkansas Sustainability Network, now known as the Arkansas Local Food Network.

Kittrell works for Heifer International and has a passion for nonprofits. She grew up in the Ozarks on the family dairy farm. The Peace Corps took her to Paraguay, where she met Bordón. At the time, Bordón was working as a tomato harvester at his sister’s farm in the semi-rural town of Itá. His family also grew beans and mandioca (cassava); they had chickens and a milk cow. When the work was done, they would sip vino con coca in the shade of mango trees and chase that shade as it moved later into nightfall. Vino con coca is something of a miracle of place: While Paraguay cultivates yerba mate, a delicious caffeinated tea you can find in many grocery stores, it’s not exactly known for its wine. This 50/50 mixture of red wine and Coca-Cola over ice was dreamt up to elevate an ingredient, to make something exceptional out of something that was not. 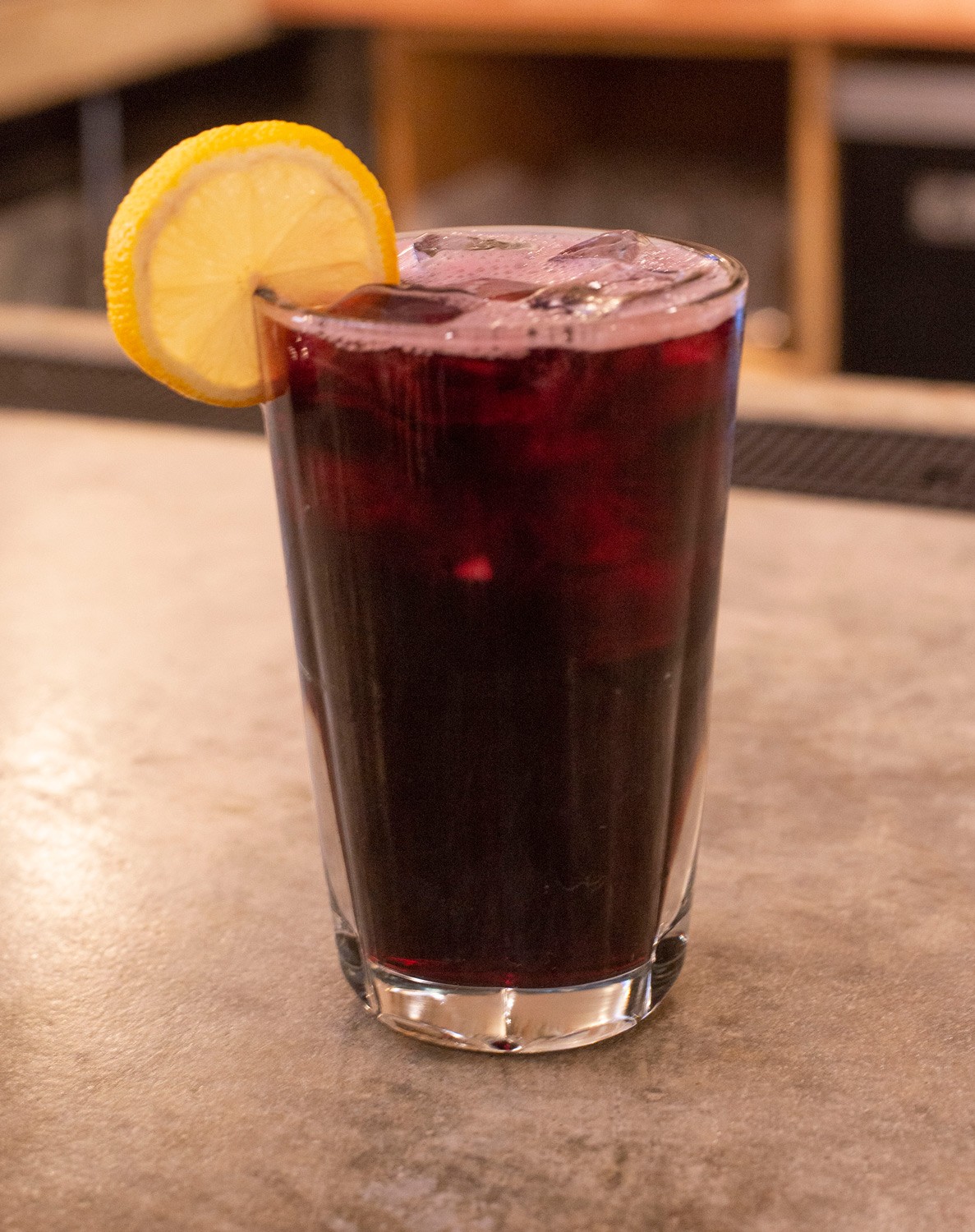 At Dos Rocas, it comes mixed with Mexican Coke and is garnished with lemon. Its uniqueness lies in this unlikely marriage of flavors. If you imagine it syrupy and overly sweet or highly acidic, you’d be wrong. Instead, it’s why you’ll want to go back, especially as the weather warms. It’s something like but more savory, more refreshing. It tastes like that first sip of something cold after a day of working up a sweat in the backyard.

What Bordón brings to the table at Dos Rocas is what makes the restaurant unique: pastel de mandioca. Like an empanada or pupusa, this is a meat pie. The difference is in the dough. Instead of flour or corn masa cakes, it is made of yucca and is all the better for it. Yucca is but rich in starch, which could easily make for a very dense crust. Instead, the handhelds have a thin top and bottom crust holding a cooked-down concoction of ground beef, green peppers, onion, egg and plenty of cumin. Dos Rocas also offers vegan chorizo and cheese pasteles. If you aren’t vegan, order them regardless; the cheese stretches like a good Havarti and the flavor remains incredible. Pickled onions are on the side; layer them between bites of your pastel for a punch of brightness. Bordón says this food is a tradition for him. His family would go to the market on Sundays and always grab one or two. 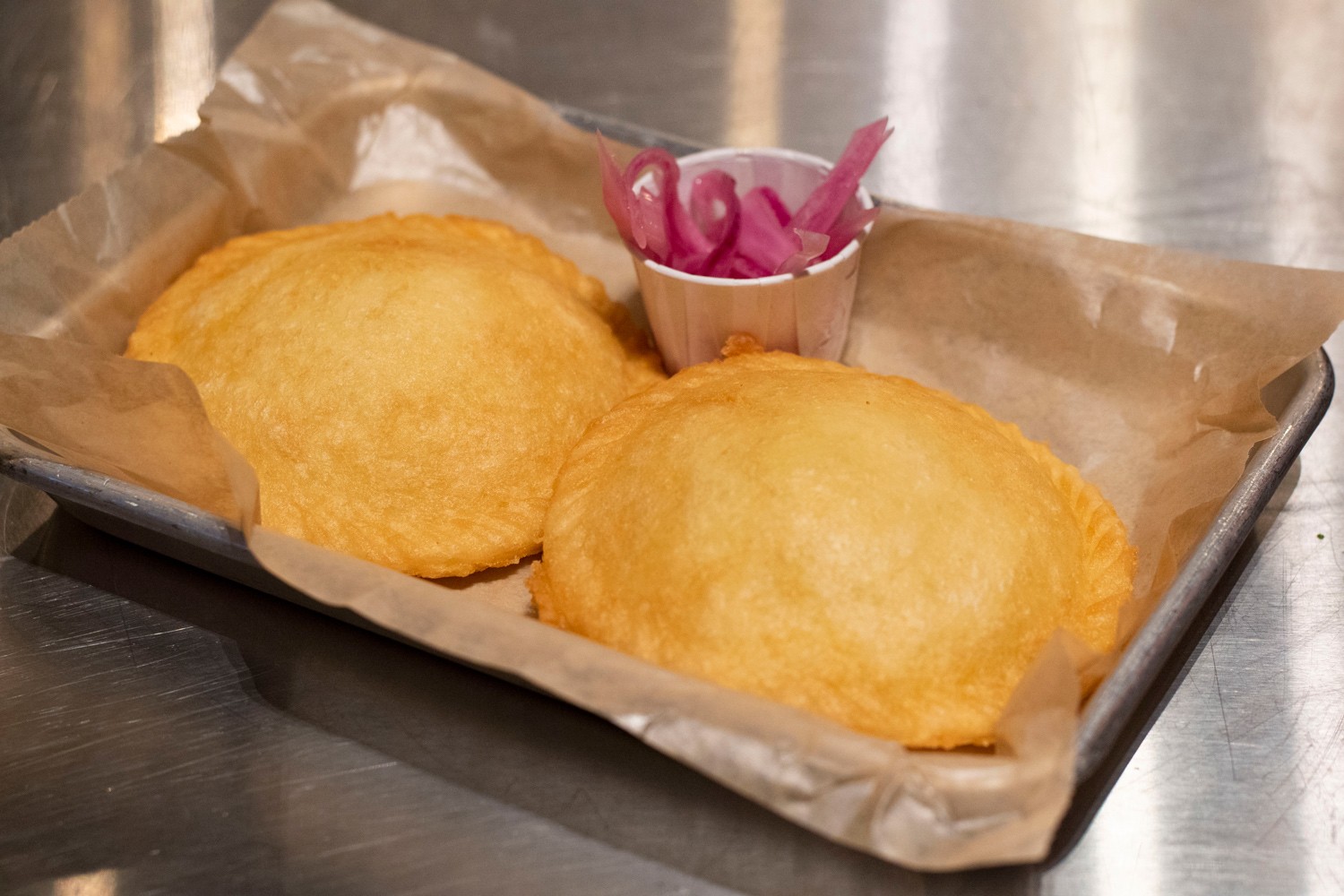 No matter your order, whether you delve into the nopales (cactus) salad with avocado and a vinaigrette made from a beautiful chimichurri sauce or if you build a plate from the seven varieties of tacos offered with a side of simmering red beans, the food at Dos Rocas is classic street fare done remarkably well. And don’t miss dessert. Churros explode with cinnamon and sugar in every bite; the tres leches cake comes topped with delicious maraschino cherries made by Loblolly Creamery and is fit for a wedding.

Bordón and Sundell were thinking when they came up with the Dos Rocas idea, and the restaurant comes through with 15 taps devoted to a rotation of local beers and a 16th tap devoted to Modelo Especial. There is also an array of Mexican and craft canned beers and a good selection of wines, predominantly from Chile and Argentina. The full bar maintains an impressive list of spirits and includes several types of rum, tequila, mezcal (made from oven-cooked agave), (made from Desert Spoon, a cousin to agave prepared similarly to mezcal) and (a fermented agave spirit). Different flights are available for each. If cocktails are more your speed, try a caipirinha, a Brazilian classic. There’s no sour mix to be found. Only fresh juices are used for their margaritas and mojitos. 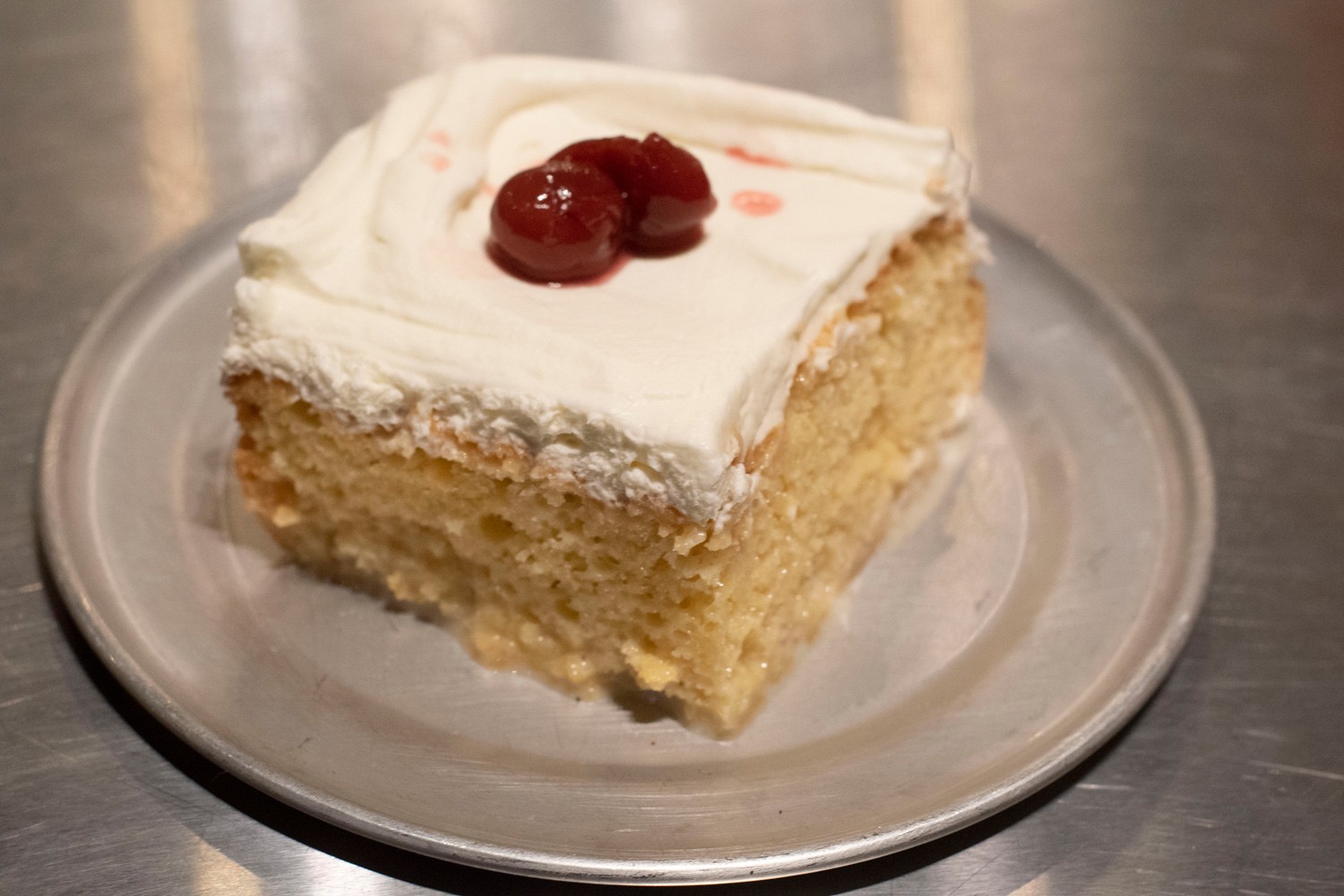 The name Dos Rocas translates as “two rocks” and is an homage to Bordón because his life bridges two distinct places, Itá, Paraguay (which means “rock” in the native Guarani) and Little Rock. Cesar is still attached to his birthplace, and he takes his wife and daughters to visit, to reconcile with that land, and so that they know their history more intimately; one of six children, he’s the only member of his family that no longer lives there.

But that’s only part of the story of this place. The name tells another story, one about the two rocks that made this place a reality: two families connected through work and the foods that sustain all of us. This is the story of how food brings us all together, to the same table, and helps break apart those ideas that divide us.

There’s a circular graphic at the back of the restaurant near the kitchen. Printed inside it is the word “E’a.” In Paraguay, it can mean a lot of things depending on the context and the inflection of the speaker. The intention at Dos Rocas is “wow,” and that’s just what the owners hope you’ll say when you walk out the door.