In the heat of summer 2020, Adaja Cooper was in a creative state of mind. She’d just wrapped up her first solo show (Adajavu) at the House of Art in North Little Rock, and Jose Hernandez of the 7th Street Mural Project invited her to paint her first mural. Titled “Ain’t I A Woman,” Cooper’s contribution to the vibrant corridor of socially conscious street art is a tribute to Black women who’ve been harmed by systemic racism, particularly by the medical community and police. The piece’s vibrant background and striking, expressive figurative work capture Cooper’s signature style.

A few days after it was unveiled, however, someone obscured the entirety of the piece with black paint. Cooper restored the mural with dedication, but in a matter of days it was defaced again. This felt like a devastatingly personal attack for a young artist. But with an outpouring of support from the community the mural was once again made new.

“I think the biggest takeaway from it was to just keep painting and keep going,” Cooper said. “You know, regardless of what happens to a mural, it is a public piece. So anything could happen, but you just keep a brave face on and you keep painting.”

She’s done exactly that. Not deterred by vandals or critics, Cooper established a name for herself and secured her place in the Little Rock art scene. A rising senior at Hendrix College, she’s collected numerous honors and accolades in just a few years, from national awards to magazine publications to gallery shows.

An artist from the start, Cooper fielded requests in her elementary school days from classmates requesting cartoon doodles — her first commissions. After dabbling in the arts on her own for years, her first painting class at Central High School set her path in earnest. She found mentorship with teacher Rex Deloney, a fellow artist who encouraged Cooper’s creative pursuits.

“We had a lot of deep conversations about what art means and why it’s so important for people of color to paint each other,” Cooper said. “Basically, if you go to a museum and you look at the things that are up, you might not see someone that looks like you. And because of that, it should inspire you to create.” 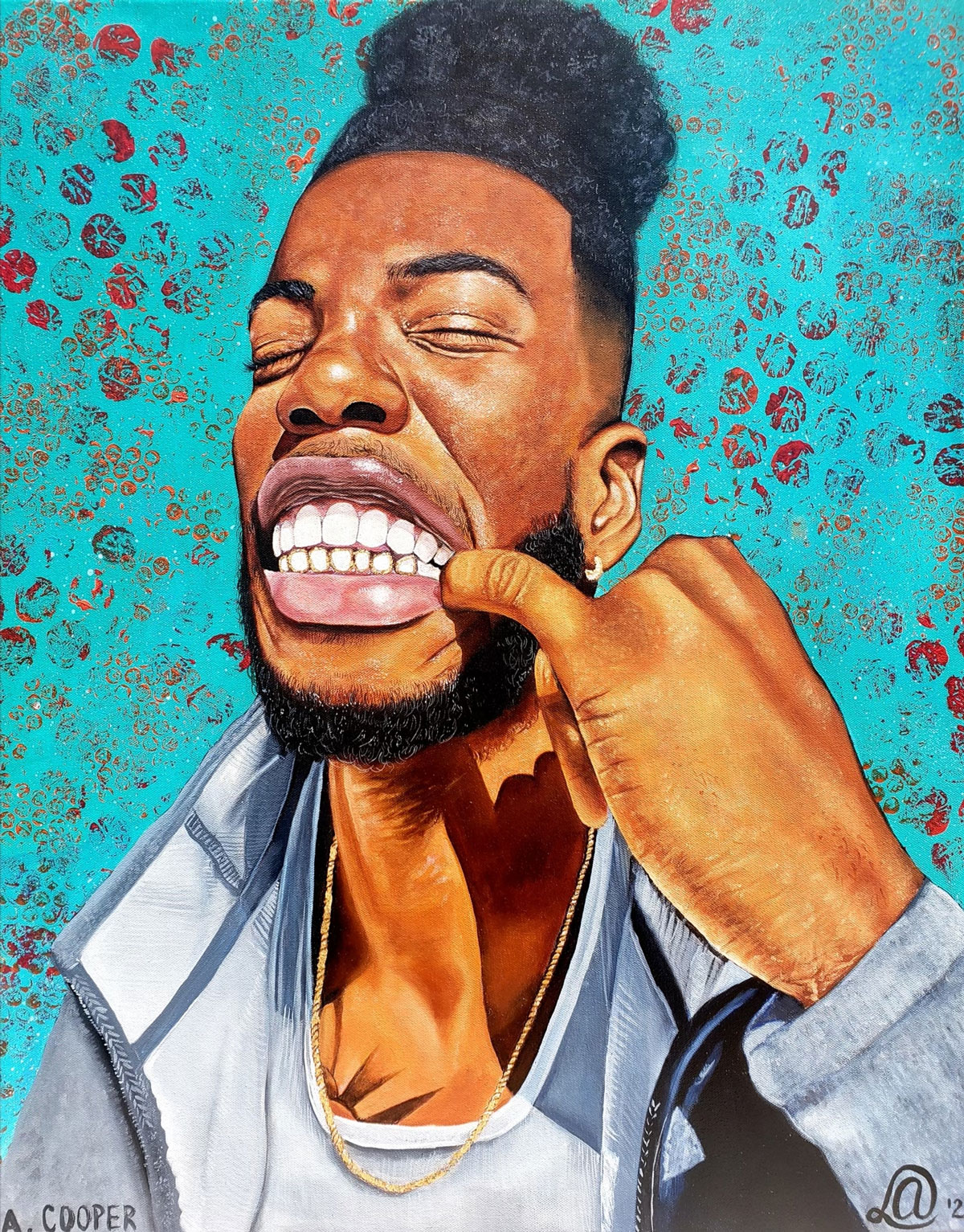 ‘FOR THE CULTURE’: Cooper favors bold expressions and vivid backgrounds in her work.

As a student at Central, Cooper was intimately familiar with the school’s charged racial history. That history became a source of inspiration, and while working on the Elizabeth Eckford Bench Project it occurred to her how historical preservation can be a form of art, and vice versa. She realized how well art and history, particularly Black history, complement one another, and began to incorporate it into her art.

“Growing up, having certain experiences really just sparked even more passion and motivation for me to paint not only the hard parts, but just the beautiful parts, the calm parts. I think they deserve to be showcased as well,” Cooper said.

Her recent series, “Two Sides of the Same Card,” is a celebration of Black history and culture. Each of seven paintings features two notable figures mirroring one another in the style of playing cards. Her subjects include a wide range of cultural icons, from civil rights heroes to musical legends.

Though grand in scale, the Two Sides series offers only a small window into Cooper’s portfolio. Her Instagram is a vast digital museum of her art, showcased in an explosion of color. Last year Cooper completed her largest painting to date, a commission for the Central Arkansas Library System to inspire children to read that was featured on a billboard downtown. An older work, “African American Gothic,” was done in the style of Kehinde Wiley, who is perhaps best-known for his 2018 presidential portrait of Barack Obama. Cooper’s piece drew Wiley’s praise on social media. Another favorite is a portrait of Erykah Badu, full of vivid colors and dynamic patterns. This vibrancy is the cornerstone of Cooper’s style. Each painting holds layer upon layer of color, with a deliberate combination of acrylic to make the background pop and oil to sculpt the bold expressions that have become a signature of her work. 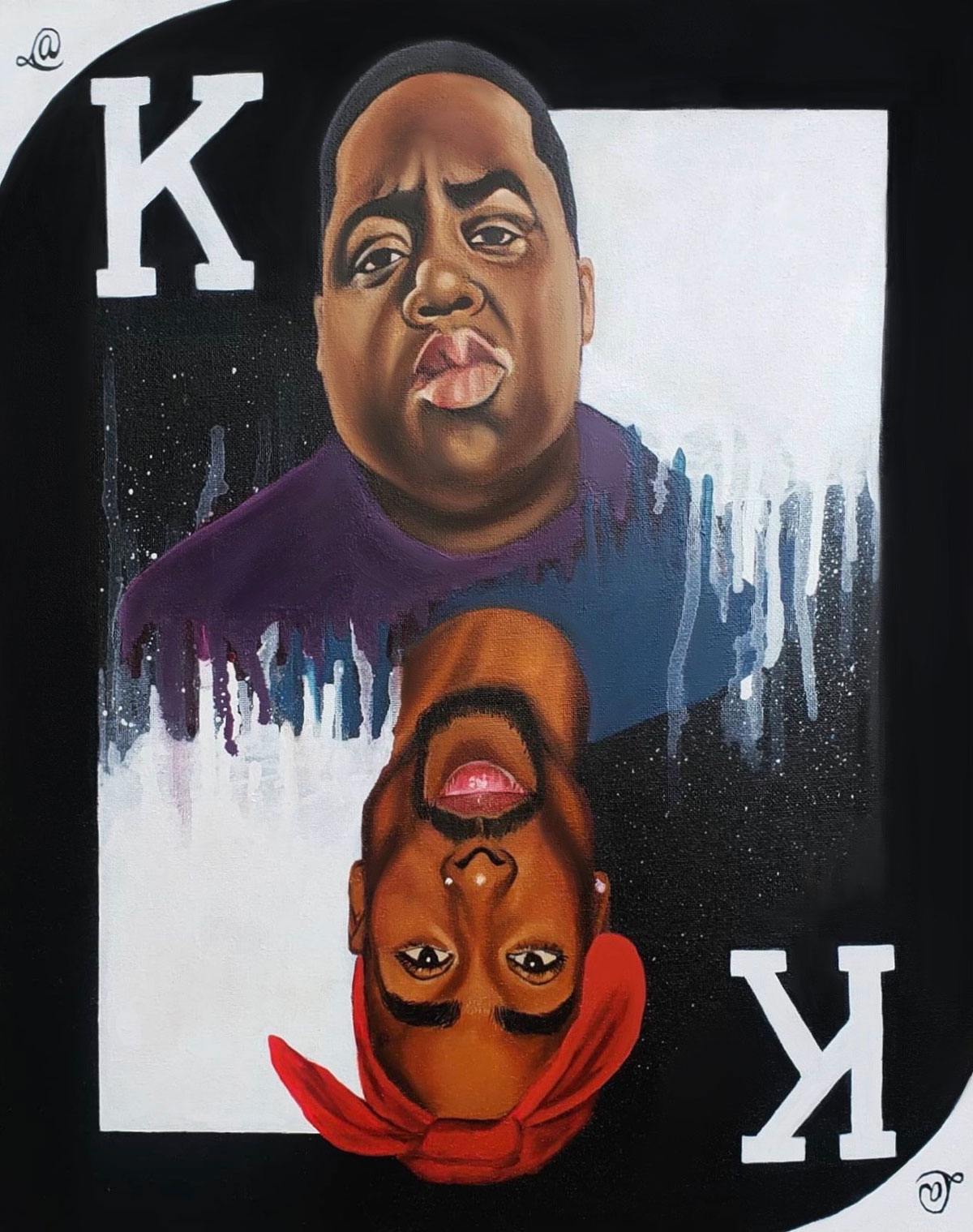 PLAYING HER CARDS:  The Notorious B.I.G. and Tupac are Kings in Cooper’s “Two Sides of the Same Card” series

Through her success, Cooper gives lots of credit to everyone who supported her along the way. She emphasizes that without those who left their mark on her, she would not be the same person she is today.

Cooper received an award this spring at her school’s honors convocation, but they pronounced her name incorrectly (it should be Uh-Day-Juh). She reports it’s a common mistake. Disheartened but unsurprised, Cooper checked her phone after the ceremony and noticed a text from her mom. “One day … everyone will know how to pronounce your name.”