Perhaps Arkansas’s most decorated woodworker, Doug Stowe of Eureka Springs is also one of our most erudite thinkers about the meaning of craft and its importance in community and education. The founder of the Eureka Springs Guild of Artists and Craftspeople and a co-founder of the Eureka Springs School of the Arts, Stowe is a past Arkansas Living Treasure and the author of more than a dozen books, most recently “The Wisdom of Our Hands” (Linden Publishing, $16.95), a passionate, thoughtful and highly approachable treatise on the importance of making things with our hands.

Who is this book for?

It’s interesting because, when I was contacted by Linden Publishing, they wanted me to write a book directed to craftspersons who were wanting to raise their work to the next level. My idea of the book was, craftsmanship is not what you’re doing in your own shop or in your own hands; it has a much wider reach than that. The publisher had in mind a woodworking audience. It’s my belief that, we all have hands, and we all need to be using them. My audience, as I see it, is much more general. Those who get a glimpse of what the hands do, have a responsibility to give others that same glimpse. Just as I was told by my friend that my brains were in my hands, and that had profound impact on my life, I think the same thing can be happening for others. When I’m thinking of others, I’m thinking about parents and grandparents. Parents who are doing things to put your children’s hands into play. Grandparents have the same opportunity. And teachers of course. I also believe that we’re teachers to some degree or another. That gives us all a responsibility. I’m hoping that I’m writing to a general audience. Whether I reach that audience or not, I don’t know.

The thesis of the book is in the title, that there’s “wisdom in our hands,” that a person or a society at large is more fulfilled, happier and healthier when they’re making things with their hands is something you’ve been evangelizing about for years and years. What sort of pushback do you get?

I don’t get much pushback because the people who would push back don’t necessarily read my message. There are people who of course want education to be efficient and inexpensive and they may not be willing to go to the lengths I’d ask them to go to in terms of supplying students with tools and materials to fulfill their constructive inclinations. I suppose those would be the people who would be pushing back. I think if anyone looks honestly at their own life and own learning they would be able to associate the things they learned at the deepest levels with the things they’d done and the place they’d actually been and the impact on the real world on them. There’s a very good reason why they keep trying to accelerate digital technology through the motions of the human body through virtual reality.

When you pick up a piece of wood, it’s not like a finger sliding on glass. Or at least it’s not going to be that way at first. The tactile dimensions and the weight of things and the smell of things and the sound and the vibrations are what we talk about when we talk about the things being in the concrete. My audience I hope is a lot of people who want to find something deeper in their lives. 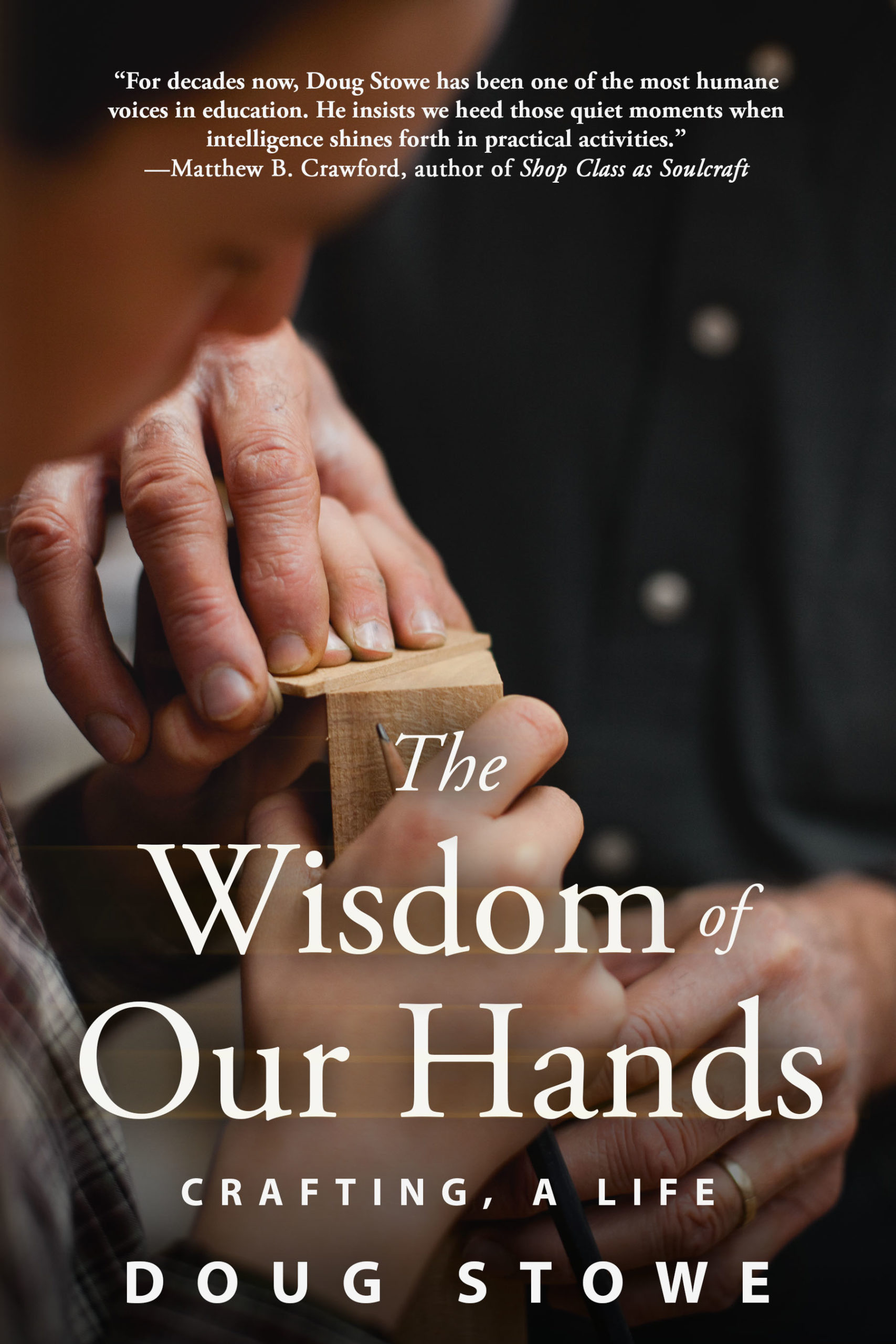 There’s a fair amount of pedagogical theory in this book. When did you get interested in education and make the connection between craft and better methods of teaching?

My mother was a kindergarten teacher, so I was watching her go off each day and I was listening to the stories she told when she came home. I had a natural interest in teaching and a fear of it because I saw what my mother put into it each day. It really became of interest because I had a daughter and when the school she was attending, Clear Spring, decided to be a high school, I asked, “Are you gonna have a woodshop?” They said, “We don’t have funding, but if you can find funding, we’d certainly start one.” So I happened to find funding, so we were able to get started.

[Studying woodworking education took Stowe to conferences all over the world, where he learned about the Swedish educational sloyd system of handicraft-based education and the theories of play through geometric building blocks of Friedrich Frobel, the German educator who created the concept of kindergarten. Stowe wrote a how-to book called “Making Classic Toys That Teach” and explores the teaching theories in “The Wisdom of Our Hands.”]

If you visit the Clear Spring campus, you find the giant kindergarten blocks. The kids use them to make forts and objects of beauty. One day they turned them into a giant sofa that they can all sit on. For me, woodworking isn’t just about picking up a piece of wood, it’s also about doing things that reshape our relationships to each other. Woodworking is a way we build community and we serve within that community. It’s a way of connecting more deeply with the natural environment. Developing yourself as a craftsman is not just getting your dovetail joints more closely to the line; it’s about bringing yourself more closely to the line, to your own sense of what is ideal.

You teach children at Clear Spring School and mostly adults at the Eureka Springs School of the Arts. What differences and similarities have you observed among them?

My adult students have all signed up and usually paid something to be there and made a commitment to a certain number of days and they are extremely attentive to my teaching. The kids don’t always know “what’s in it for me.” They come to woodshop because it’s expected of them. I have to prove to them that it’s of interest. Or they have to prove to themselves that it’s of interest to them. Adults are less forgiving of their own mistakes. For kids, they’re so proud of their work. I could look at it and say, “They could’ve done that better.” But they have what some of my adult students need, and that’s the willingness to forgive themselves for not measuring up to the standard.

The hand slips or the mind slips or the wood doesn’t perform, one or another. So many times I’ve looked at the grain on a piece of wood, and I think, “Because the grain goes this way, I have to approach it from a certain direction,” but then I find that it’s tearing out. And it’s just some little misunderstanding we’ve had. Perfection is elusive and maybe there’s no such thing.

You’ve been a woodworker for 46 years, a published author on woodworking topics for nearly 30 and a teacher for more than 20. How have each of the three pursuits informed the others?

I think of myself as a woodworker. I teach woodworking and I write about it and I do it. That’s who I am. I don’t think there’s anything I would do differently about that. We’re multifunctional. We’re like Swiss Army Knives in a way with screwdriver blades and all that stuff. I mention in the book that in a sense we’re all teachers. When you make something and you put it out for people to see it, you’re hoping they take something from it. Either they buy it or show interest in it or they think about things a little differently. Crafting something is a form or teaching. Writing a form of teaching. I could just as usually say I’m a teacher. Then again, maybe it’s best just to be a human being and let people say whatever they want.

A cruder version of that question: Woodworking is widely known not to be especially remunerative. Was it necessary for you to do all those things to make the financial puzzle work?

It’s worked out to my advantage that I had an opportunity to write some articles and a book and more books. I thought at first that my writing would raise an interest in my woodworking, which it did not do. I’d go to these shows, and I thought, “Now that I’m a published author, maybe they’ll pay more attention to me.” It didn’t work that way. But I think that writing and teaching have been a tremendous benefit to me. There’s a saying that if you want to get good at something, try teaching it to someone else. Because it causes you to think about your own processes. When I teach, I’m always there as much to learn as to share.

You seem spry at 73, but do you envision a world where you pull back on any of your work?

I’m already pulling back. I’m going to retire from Clear Spring School at the end of this semester. I’ll still be available as a resource and volunteer. With this book, I don’t know if I have another one in me or not. I still have articles I’m working on. I’ll still be teaching adults. Maybe not at the same pace. All of us get to a point where we slow down. I think we have a tendency to get a little smarter about things. When you do something a lot, you start to realize that some of the steps you thought were essential are not. Some of the things start falling to the wayside and you simplify, and I think that enables you to do what you do and maybe with a little less stress and in a little less time. Slowing down is not necessarily a bad thing.

Kelly McDonough, executive directors at ESSA, has described you as the “Yoda of woodworking,” and if the philosophical underpinnings of this book reflect your teaching style, that seems spot on. Has the reception to that style changed?

I have a longer narrative. When you’re explaining to someone, it always helps if you can explain something from personal experience. That narrative function of a human being is so critically important. It really helps when you can not just tell people what they should be doing, but give it that deeper sounding board that comes from your actual experience. I think getting to be 73 years old has some benefit to teaching.

What’s something you’ve made recently that you’re especially proud of?

I have a little box that is a reliquary of wood. It’s designed to look like a little chapel, so it’s got doors that open to reveal, what would be the choir loft of the chapel and has little doors that pull out. Inside I’ve got 25 Arkansas hardwoods. So I call it a reliquary of wood. It’s to celebrate the diversity of our forests. I did another version that I call “The Choiring of Trees” named after Don Harrington’s book. It’s the same thing, except that it’s chapel shaped like a triptych that you’d see in a museum where it opens up to scenes of holy significance. Inside are 27 or something Arkansas hardwoods as if they they are a choir.