Growing up as po’ folks in south Arkansas meant the first tamales I ever ate came from a can with the word “Hormel” printed on the label. Thank the gods of masa and corn husks that those drippy, soggy little mush logs weren’t my only experience with them. Because let’s get something out in the open here: You can talk steaks and barbecue, bratwurst or boeuf bourguignon, but when it comes to food superiority here on God’s green earth, tamales are near the top of the list.

Why are tamales so great? Well, first off, they’re great because, well, science. Most tamales are made from masa, which is derived from hominy. Hominy is, itself, a crazy sort of a food—take regular corn, soak it in an alkaline solution (like limewater), and when it swells up into hominy, it’s actually healthier for you than it was before. Eat it whole or grind it up into grits or masa flour. Take that masa flour, turn it into a dough with the addition of some lard or shortening, wrap it around something delicious like meat, vegetables or even fruit, then steam it in a corn husk, plantain leaf or wax paper, and you’ve got yourself some tamales.

Now, I said up there that most tamales were made from masa, but of course some of you folks were champing at the bit to call me out, because there is a type of tamale out there that uses regular old corn meal as a base—the famous Delta “Hot” Tamale, a variety that are also boiled in their wrappers rather than steamed. Think that these Delta items must be some sort of Johnny-come-lately to the culinary scene? Think again. The Spanish were the first Europeans through Arkansas, Mississippi and Louisiana, and Spanish settlers from Mexico brought these tasty treats to our hallowed climes in the early 18th century.

Tamales are such a part of the Mississippi Delta landscape that bluesman, Mississippi native and frequent visitor to Arkansas Robert Johnson (post soul-selling and pre-curse-of-27 death) even wrote a song about tamales called “They’re Red Hot”:

But enough of the song and dance about the history of tamales. You wanna get your tamale on, don’t you? Here’s where you ought to go:

*La Hacienda: With locations in Hot Springs, Benton and Little Rock, there’s simply no excuse to pass up the tamales at this Mexican mainstay. The folks at La Hacienda will unwrap your tender, pork- or veggie-filled tamales for you before they hit the table, and even better, they douse them in a rich, tangy red sauce and a flavorful pico de gallo. Every once in awhile, I have a server at the Cantrell Road location ask me if I’d like the kitchen to pour queso over my tamales, but the look of horror on my face usually means they don’t ask twice. Not that I’m against melted cheese on tamales in general, it’s just that these are best with that tasty salsa rojo.

*Heights Taco & Tamale Co.: This new kid on the block up in the Heights area serves those Delta-style tamales, and when it comes to these bad boys, I recommend going for the cheese dip. And the chili. But even if you don’t, you’re in for a flavorful treat, as the well-seasoned meat in these firm, moist tamales packs quite a flavor-wallop. The tamales at HTT have gotten steadily better since the place opened, and it’s good to see the kitchen knocking it out of the park with these tasty tamales. I mean, after all, it’s in the name.

*Rhoda’s Famous Hot Tamales: Mention travelling anywhere near Lake Village to a foodie in Arkansas and the inevitable question is, “Are you going to stop at Rhoda’s?” These are the real-deal Delta-style tamales, wrapped up in their little corn husk dresses and oozing greasy, tasty tamale goodness. There’s a ton of spice to these Hot Tamales, something comes through right when they hit the table. Or, as Eat Arkansas alum Kat Robinson recollects over on Tie Dye Travels, “Damn, they smelled great.”

*The Fold Botanas & Bar: When I went back to eat for my change-of-heart review of The Fold recently, I was pleased to find tamales on the menu. I ordered the Beef Tenderloin version, which seemed just way too fancy for the humble tamale, but these were phenomenal. Each bite was fantastic, not least of all due to the spicy habanero queso drenched over the whole affair. The tamales themselves were substantial, well-balanced and seasoned to perfection. This is the dish that made me fall in love with The Fold after having rather mixed feeling about the place for so long. 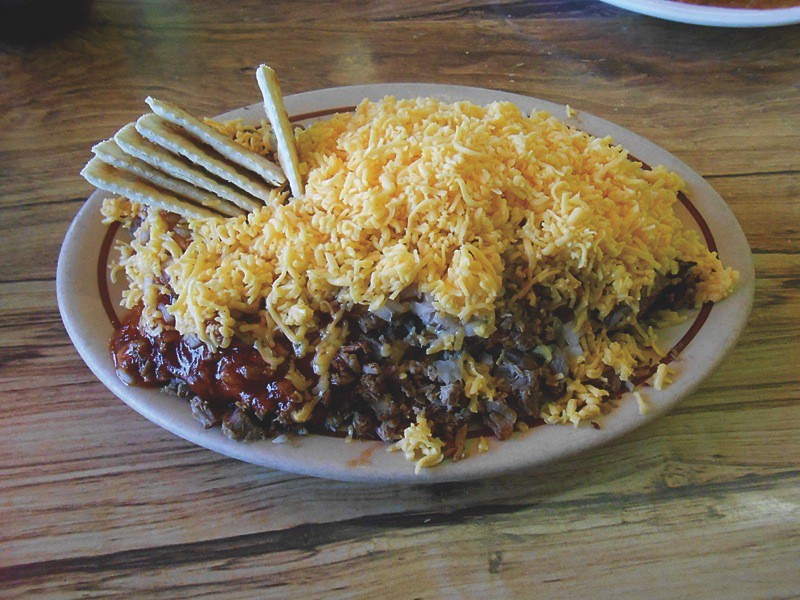 *McClard’s Barbecue: For a place that’s built a (debatable) reputation as one of Arkansas’ top stops for barbecue, lots of folks headed out to this Hot Springs eatery aren’t going for ribs or pulled pork. No, they’re going for the “Tamale Spread,” a mammoth gut bomb of ingredients that spills forth from every plate like Noah’s own flood made of shredded cheese. I know folks that swear by this dish who will travel from miles away just to wrap their lips around a bite of the McClard’s spread. As for me? Well, I reckon if you’re in the mood to eat a huge plate of insanity, this is a good way to do it. I find the tamales themselves to be a bit too mushy, but I admit it’s been awhile since I had a Tamale Spread—and my cardiologist still sends me a thank-you card every 6 months.

*Doe’s Eat Place: The original location of Doe’s hails from Greenville, Mississippi, right in the heart of tamale country. Does that mean that these are some sort of special, authentic Delta-style tamales? Well, your mileage may vary. I’ve had them where they’ve been quite acceptable, even approaching good. I’ve also had them where they’ve been dry, falling apart into mush or just had an odd flavor to them that I’ve never been able to place—sort of like how astronauts say outer space has a smell they can’t describe but would know anywhere if they smelled it. But Doe’s has a lot of fans (I mean, a lot of them), so go give these tamales a try for yourself. Just have a safe space walk.

*Tamale Factory: I am including this last one even though it’s the one place on this list I can’t personally vouch for. When looking through the Eat Arkansas archives for tamale pictures, I came across a post by my colleague David Koon all about The Tamale Factory in Gregory, Arkansas, a small town outside Searcy. So this is a general call for opinions from you all who have tried this joint. Is it worth a drive up to Gregory to sample? I’m being told it’s basically like Doe’s, and makes all the tamales that George Eldrige’s Doe’s locations serve.

And, obviously, I haven’t named every place in the state that makes tamales. Tell us about the ones I missed down there in the comments.