Scott Bradlee’s Postmodern Jukebox showed up in Little Rock without Scott Bradlee, its founder. But, if that was even noticed by the large crowd filling most of the Clear Channel Metroplex’s events venue on the back end of the radio complex off I-430, it didn’t seem to matter Thursday night.

Fresh-faced Nick Poulios was standing in for Bradlee on the ivories, as he had in the other stops before the PMJ tour arrived here for the first time. Adam Kubota, the band’s bassist, serves as music director for this New York-based troupe that’s on its way around North America. Friday night, they were due in New Orleans, where coincidentally Bradlee has already been for a few days, and the band will play the House of Blues and perhaps take in a little Jazzfest.

Thursday’s PMJ lineup consisted of two former American Idol contestants who, like Poulios, were new to the tour – native New Jersey vocalist Jax (she just uses a first-name moniker, but was born Jaclyn Miskanic) and Mario Jose, who served as emcee and also wailed magnificently over an amazing range on a few numbers. They were joined by PMJ tour veteran vocalists Robyn Adele Anderson, Casey Abrams and Dani Armstrong; tap dancer extraordinaire Anissa Lee; and backed by Preservation Hall-style trombonist Lemar Guillary from L.A.; some guy identified only as Ben the Sax Man on (natch) sax and clarinet; Bob Hamilton on guitar and banjo; Poulios; and Chip Thomas on drums. 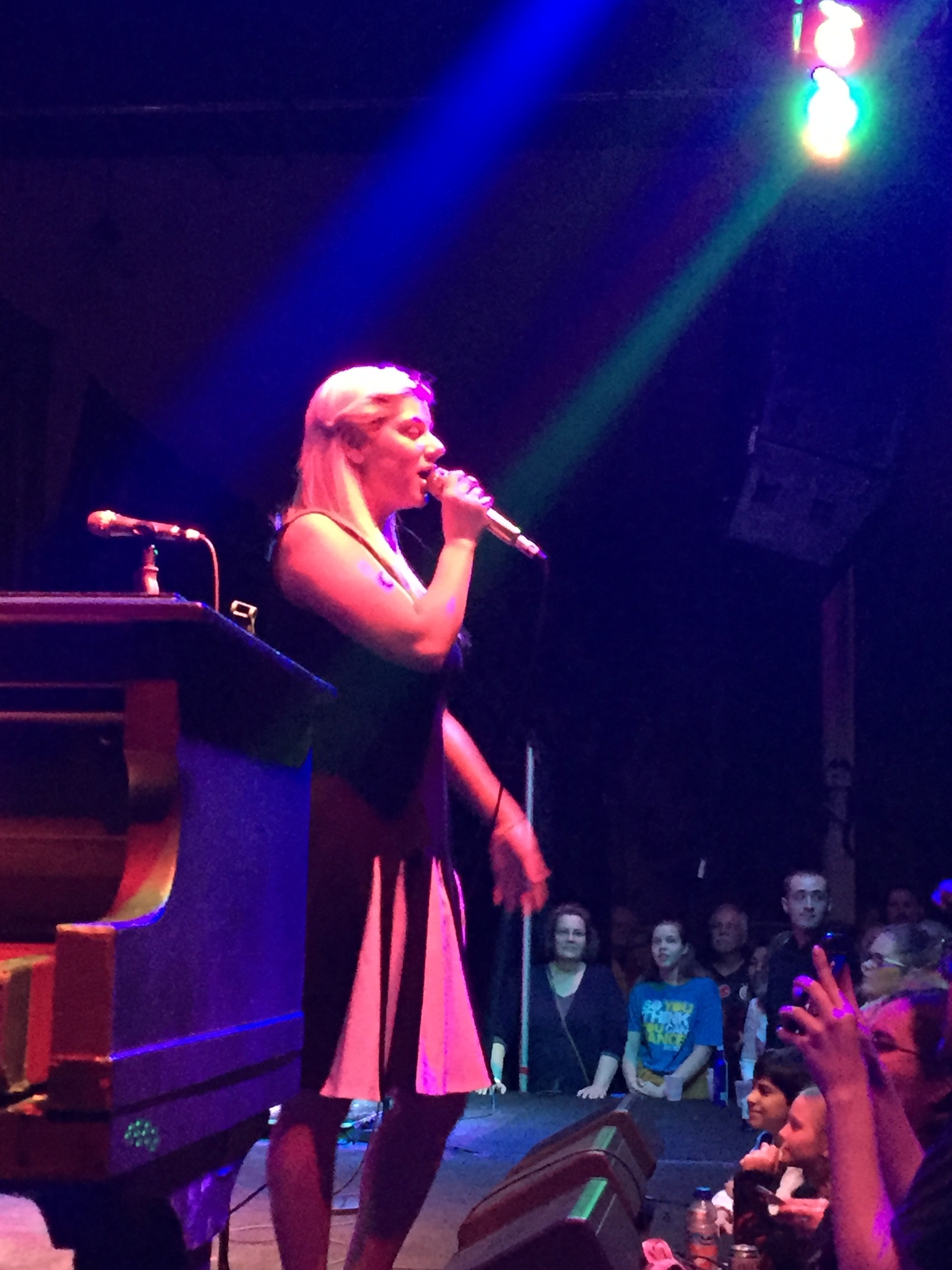 Bradlee already hinted on the PMJ website FAQ (which he handles with video answers) that he’d be stepping back more from actually performing, as putting together the hit show and touring for going on six years has become difficult along with pumping out albums and filling the demand for the Youtube throwback takes on popular songs.

If you’re unfamiliar with PMJ, the show opened with Anderson and Lee’s Charleston flapper-style musical take on “Call Me, Maybe” and then covered about 80 years of American musical styles with songs nearly all the crowd eventually recognized. And by crowd, we’re talking about an age range that surprising ran from elementary school-age kids leaning up against the stage to folks in their 70s. Some people came in dated costume, as Postmodern Jukebox fans are wont to do. A hundred or so folks had obtained tables and chairs as soon as the doors opened; the rest (500-600, we’re not sure, but it was a surprising – to us – turnout; who knew this many folks in Arkansas had already heard about the PMJ craze?) filled an open floor in front of the stage.

The band’s shows cover most of the songs that have either been Youtube viewing sensations or are already album classics with that PMJ touch, such as Taylor Swift’s “Shake, Shake, Shake” and Radiohead’s “Creep.” Consider us blown away, though, by the concluding number to the show’s main set, The Postal Service/Ben Gibbard-penned “Such Great Heights,” done as if by the Jackson 5 in an “I Want You Back” styling.

Abrams, the “hippie” of the bunch with a beard and bushy, curly hair falling over his shoulders, stole the show with his antics and acrobatics. He balanced a guitar while quaffing a beer, ventured out into the audience throwing flowers to fans, and later concluded a song with a flying stage leap like it was the X Games. As for singing, he hit the Sam Smith highs in a New Orleans-funky “Not the Only One,” which was just one of several showstoppers. Each singer took a turn (hence the jukebox name of the group), and some of the instrumentalists traded off too, such as when Kubota let Abrams show off his bass chops a few times. 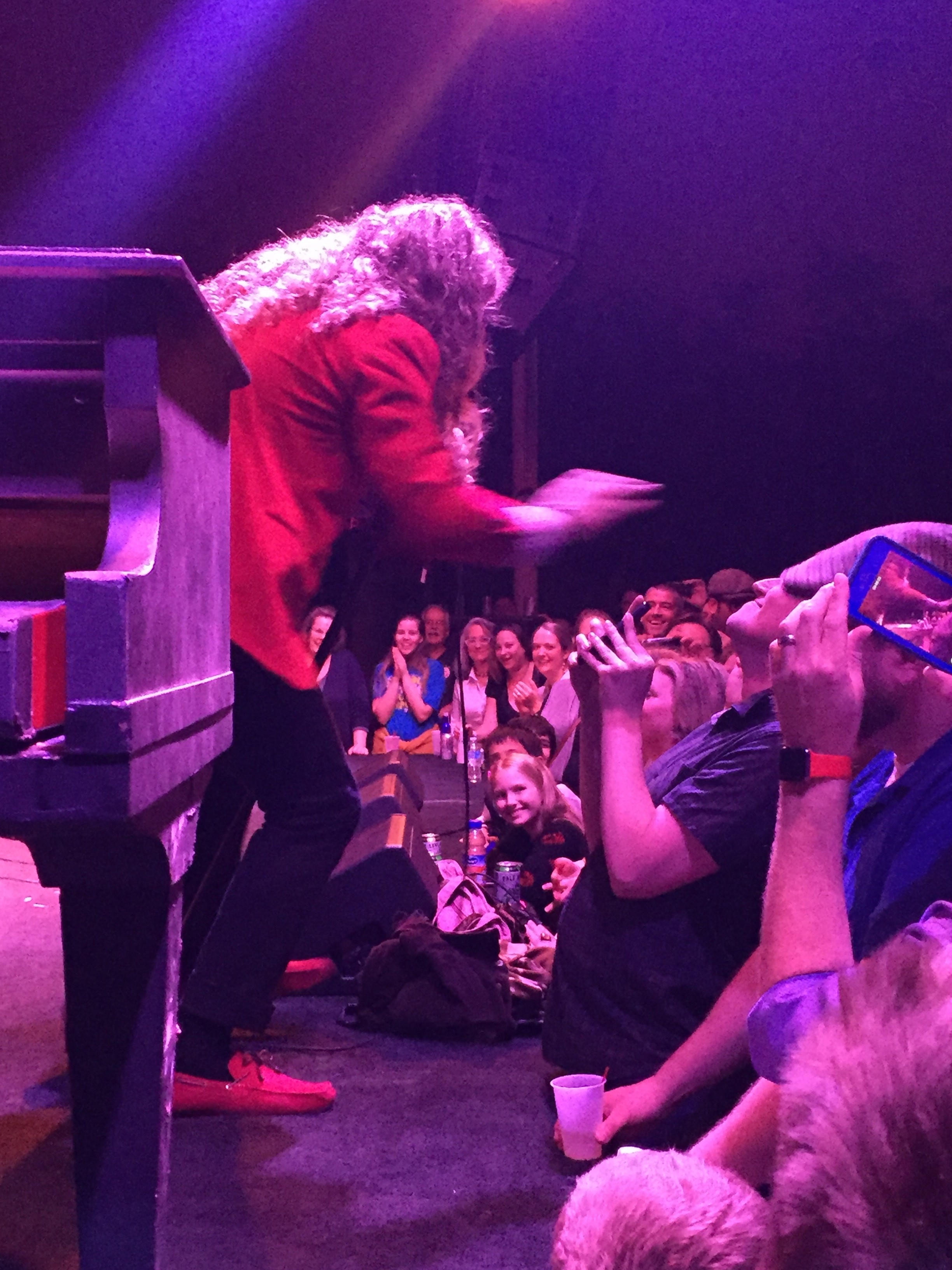 Another highlight of the night was a tap dancing and drumming battle royale between Lee and Thomas.

The crowd stayed energized for the entire almost-two hour show and enjoyed talented performers in a type of act rarely, if ever, seen here. Meanwhile, a couple of aging local pianists in the audience with wide song repertoires and styles of their own were musing why they hadn’t thought of coming up with an act like this. Such is the genius of Bradlee who, while he wasn’t there, had brought together artists from coast to coast and crafted a brilliant production. I mean, who else could have thought to blend The Postal Service with the Jackson 5?

Another chance to catch PMJ in Arkansas comes Aug. 6 at the Walmart AMP in Rogers with the Christmas a cappella favorite Straight No Chaser.