Somehow George Takei’s entire life is timely right now, and wouldn’t you know it, there’s an Arkansas angle. In “They Called Us Enemy,” the “Star Trek” actor’s new graphic novel memoir from Top Shelf, Takei tells the story of his family being removed from their homes in 1942 and sent by train to an internment camp — a euphemism, Takei notes archly, for imprisonment — in southeast Arkansas. They were some of the thousands of Japanese nationals and Japanese Americans shipped to that camp, one of 10 the federal government maintained during World War II. And I will tell you this, as a former Northwest Arkansas public school kid who scored a 5 on his AP U.S. History test, I don’t remember anyone underlining the fact that we had internment camps inside our state. Leave it to George Takei in the year 2019 to exhume that bit of trivia, and the realization that he was quietly living history here, long before he was one of the most famous entertainers on the planet.

The story is narrated from Takei’s point of view; he shares the writing credits with Justin Eisinger and Steven Scott, while Harmony Becker illustrates. We see Takei on stage at a Ted Talk in Kyoto, flashing back to time when Americans weren’t debating whether we were, in fact, erecting concentration camps for nonwhite immigrants — but pulling families from their homes, putting them on trains and packing them into military-style barracks under armed guard.

Given all that, the story reads pretty upbeat, told as it is by a successful old person who has more than a little nostalgia for his innocent days with his loving family. His parents’ story alone is beautiful. His father, Takekuma Norman Takei, was born in Japan and migrated to California as a teen; his mother, Fumiko Emily Nakamura, was born in California but grew up in Japan. They met in 1935 and had little George in 1937, followed soon by Henry and by Nancy Reiko — a young nuclear family with baby in arms by the time this book finds them. After the bombing of Pearl Harbor in 1941, Takei writes, “the single most popular political position was ‘lock up the Japs,’ ” and Earl Warren, then the attorney general, eventually the governor of California and later a Supreme Court justice, turned that knife hard, claiming that the Japanese and Japanese-Americans in California posed the threat of another Pearl Harbor. 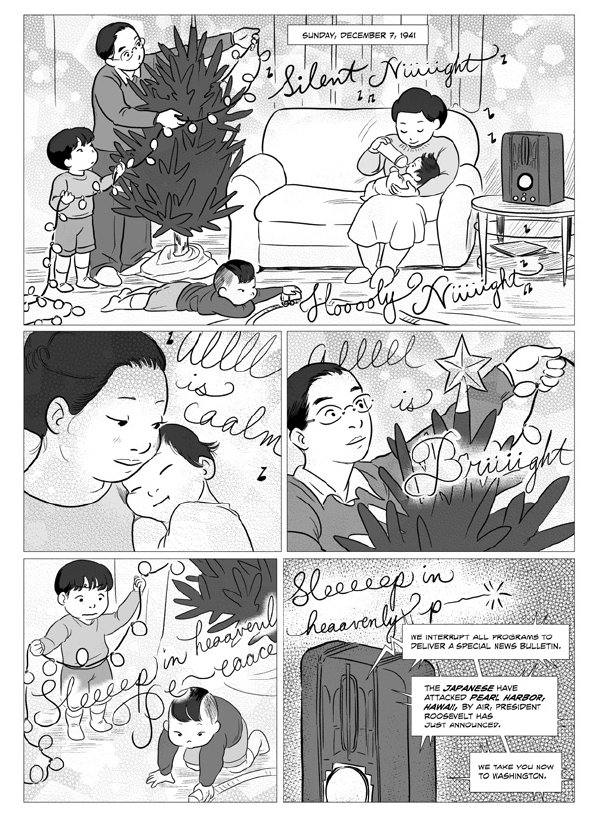 From “They Called Us Enemy” (Top Shelf Productions)

There was no evidence that any of the hundreds of thousands of ethnic Japanese had committed any spying or sabotage. But because this was, at its core, a racist reaction to a nonexistent problem, the very lack of a Japanese reaction was seen as proof that you couldn’t tell what they were thinking. As far back as 1936, Franklin Roosevelt had been keeping a list of potential Japanese who would be put into concentration camps. It took less than three months after Pearl Harbor for Executive Order 9066 to direct soldiers to start knocking on doors and pulling Japanese-American citizens along the West Coast from their homes.

Takei was 5 years old when he and his family were loaded onto a coach car and moved to “a far-away place called Arkansas,” as his father explains. They arrived in Desha County near the Mississippi border, assigned to Camp Rohwer, where as many as 8,500 Japanese were held in barracks, behind fences, guarded by soldiers. Rohwer and Jerome were Arkansas’s two “war relocation centers,” the easternmost camps where Japanese families were kept until 1945. As a little boy, George was captivated with the adventure of it all, until he saw the indignities mount and redouble: the sunbaked barracks, packing a formerly middle-class family of five into a single room, roads of mud, open-floor-plan bathrooms, terrible food — and later, loyalty questionnaires. His father, in his late 30s, and fluent in both Japanese and English, became a natural leader in the camp. Simple pleasures took on the weight of lifelong fond memories: a single Jeep ride that George’s father wangled became a reel of freedom.

The black-and-white illustrations are textured, cinematic and playful with a splash of manga that grounds them in Japanese visual tradition. Becker’s great at getting the story across with just a few lines, as when young George has a staredown with a Japanese Santa he realizes must be a fraud, and who has a single bead of sweat rolling down his face as he stares at the kid in return. There’s a lightness in the telling, a briskness, even in its treatment of heavier historical currents.

Ultimately a comic style, seen through a little kid’s eyes, is the right medium to gather this story that Takei has told all around the world by now. He moved back to California, went to UCLA, became perhaps the most famous Asian-American actor in the history of American TV, and leveraged that fame into a brilliant social media presence that has made him a powerful voice online for civil rights and LGBTQ equality. He has become, by any reasonable measure, a Great American. And yet here we are, 75 years after our grandfathers liberated Europe, holding children behind fences on American soil and debating what we should call this practice. “They Called Us Enemy” speaks for those kids now, while reminding us not to underestimate their futures.