As the calendar goes, trick-or-treaters only get about two weekend Halloween nights in a childhood before they’re deemed too old for the privilege of door-to-door free candy. Those weekend Halloween nights free of homework and early bedtimes are coveted by youngsters. Dressing up in costumes, staying up late and eating candy until you’re sick is a perfect way to spend an evening when you’re 9. And 9-year-olds may not be thinking about it, but they’ll be 14 the next time Halloween falls on a weekend night. Incidentally, there’s a full moon Halloween night, the second full moon of October, which is known as a blue moon. Nine-year-old trick-or-treaters will be 28 the next time a there’s a full moon on Halloween night in 2039.

With All Hallows Eve a couple weeks away and the state’s coronavirus cases on the rise, we wanted to know what families who would normally be making memories trick-or-treating are doing for Halloween this pandemic year, when Halloween falls on a Saturday.

Nicole Boutiette, who lives in North Little Rock, said she and her daughter, Josephine, and husband Clay are doing full makeup and dressing up as a family of monsters. “We’re only going to be around family,” Boutiette said. “We are making chili, decorating pumpkins and doing Halloween crafts.”

Boutiette’s cousin took a page from an Easter playbook and bought a slew of miniature pumpkins she’s going to hide so the kids can go on a pumpkin hunt in the yard. “She’s also making a Halloween-themed charcuterie board,” Boutiette said via text message with a laughing emoji. “We may open the door for trick-or-treaters that evening but we haven’t decided yet,” she said.

Lauren Schiller, who lives in the Heights neighborhood of Little Rock, is still undecided. She said Halloween night will be a game-time decision. “It’s a struggle because these are the last years of Niko [Schiller’s son] being ‘kid’ enough to trick-or-treat. Balancing the needs of great childhood memories with safety is one of the hardest parts of parenthood, even outside of a pandemic,” she said. Schiller said they’ll probably mask up and go out early. Afterwards, they’ll wash their hands and put the candy in the freezer for 24 hours before consuming. Schiller ended the message with an emoji of a woman shrugging, unsure of what to do. “Really, I’m just praying for rain; then we’re off the hook,” she said.

Angela Alexander, of Little Rock, said her family still didn’t know what they were going to do. “I’m open to my kids trick-or-treating with masks on,” Alexander said, “but it seems like most of the people I talk to aren’t open to that at their homes and won’t be ‘open for business.’

“Maybe I’m more comfortable with it because my kids are older and more responsible? I know I can trust them to be aware and make good choices. We’ll do the thing at Dickey-Stephens Park next weekend [Arkansas Travelers hosted a Halloween festival and movie night Oct. 24] and we have a drive through at Pulaski Heights Elementary on the 29th. As for Halloween night, I guess we’ll just play that by ear.” Alexander ended the message with sad face emoji followed by a shrugging woman emoji.

Ridgeway Drive, which runs from Markham to Lee streets in the Hillcrest neighborhood, has been a hub for trick-or-treaters over the last several years. That’s where Jennifer Finley and her daughter, Evie, are going to hang out with family that reside on the street.

“However, I am not going to be taking Evie door to door,” she said via text message. “We’ll probably get some caramel apples, fun stuff like that to make up for it. Pretty sure Jared’s [Finley’s boyfriend] mom is still planning on handing out candy but is going to be using a PVC pipe hahaha.”

We knew we had to talk to Jared’s mom, Mary Richardson Admire, about this candy delivery system. Admire’s always been serious about Halloween. She elaborately decorates her front yard every year. Admire said that when Halloween decorating ideas began to proliferate online, she came across some Halloween blogs and got even more serious about decorating.

“[There’s] some people out there are doing some crazy stuff — building their own animated props and cemetery columns. … So I just started reading through that stuff and started doing some things on my own,” Admire said.

Admire’s next door neighbor is quite the Halloween decorator as well, Admire said, and this year they decided to join forces. “Their entire yard and my entire yard is one great big old cemetery,” she said.

Trick-or-treaters usually trek through both yards rather than using the sidewalks, Admire said. So with social distancing safety in mind this year, both Admire and her next door neighbor have decided to close off their yards and front doors to trick-or-treaters. Admire made a makeshift fence to drive the point home. “We get a lot of trick-or-treaters on a normal year,” she said. “Over a thousand, and I’m not exaggerating at all.” Admire said she’s still giving out candy, though. She’s planning on having a table in front of one of the sidewalks. 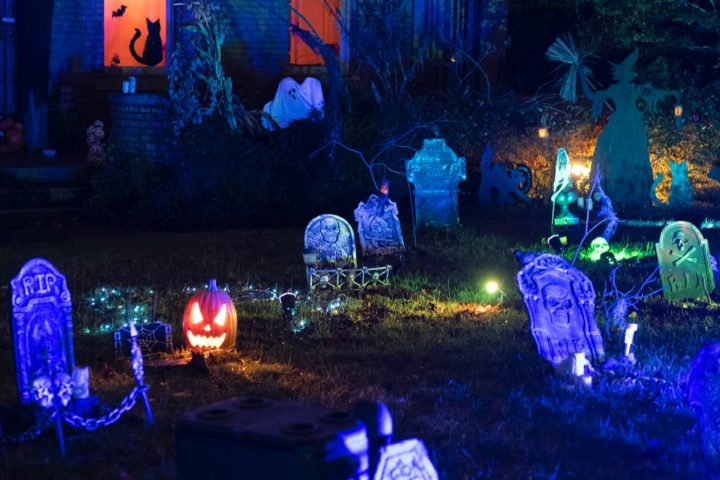 “It’s going to be …” Admire said, cracking up, “this sounds crazy. … It’s going to be a 6-foot-long PVC pipe.” She’s seen a few on a Halloween Forum blog she follows. One of the bloggers attached a PVC pipe to the top of his front stair railing so he can shoot the candy down the steps to the trick-or-treaters. The pipe was painted with orange and black stripes. “I’ve been collecting,” Admire said. “I’ve been going in the woods behind Jared’s [Admire’s son] house a lot,” she said, laughing. “Deep down in those woods, I’ve been collecting bark that has fallen off trees. And I don’t know exactly how I’m doing it yet, but I’m going to make my delivery pipe look like a hollow log.”

Every year there’s a theme to Admire’s decorating and costuming, she said. This season, along with the haunted cemetery, she’s going to put in a swamp by using a combination of pool noodles, PVC pipe and a black tarp. “The pool noodles will hold about one and a half to two inches of water,” she said. “And just dead leaves and frogs, and I haven’t found it yet but I want an alligator head real bad.” 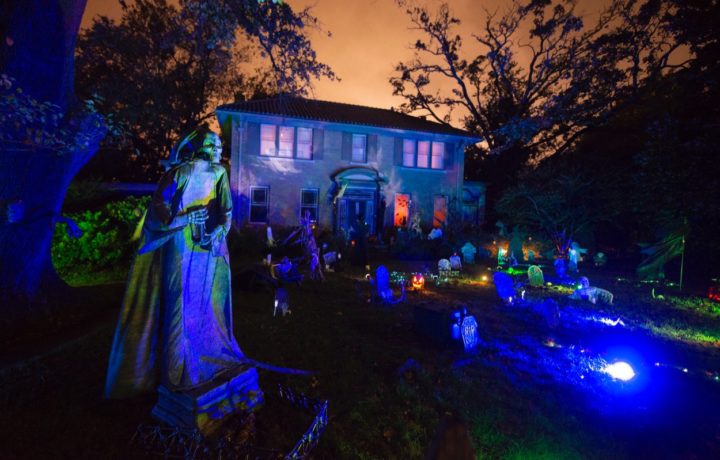 Admire said Halloween decorating is all about the lighting. “I have tons,” she said. “I also have six fog machines.”

The other night, Admire turned the fog timers up too high, setting them to go off every ten seconds. When she looked out her front window she couldn’t even see her yard. “[Fog] was all over the street,” she said. “I thought someone was going to call the police. And that was only three of the machines. I’m still searching for the sound effects I want. It needs to be swampy. I don’t want just ghosts and stuff, it has to have owls and crickets and dripping water, stuff like that.”

Admire and her neighbor are both nurses, and Admire said she’s going to encourage people to be safe, but that ultimately, “It’s going to be up to the trick-or-treaters and their families to remain safe. This year it’s going to be even more difficult. Usually we just hang out on the front porch and go in and out of the house, but I think we’re going to be more towards the sidewalk. We’re going to have signs made that say something about social distancing. No masks, no treats … I fully expect there’s going to be people who try to cross the line and we’re going to stop them. Then, it’s up to them. It’s up to the parents to keep them safe and not to let 20 kids crowd up together.”

Halloween was still two weeks away when Admire and I spoke, but she already knew the weather forecast.

“Right now, it’s supposed to rain a lot on Friday and clear off on Saturday,” she said, “and I hope it either gets pushed forward so it’s all gone by Friday or it doesn’t happen until Sunday because it’s a full moon — a blue moon. I will say, if it rains and the ground is still wet, it makes it to where my fog stays closer to the ground.”