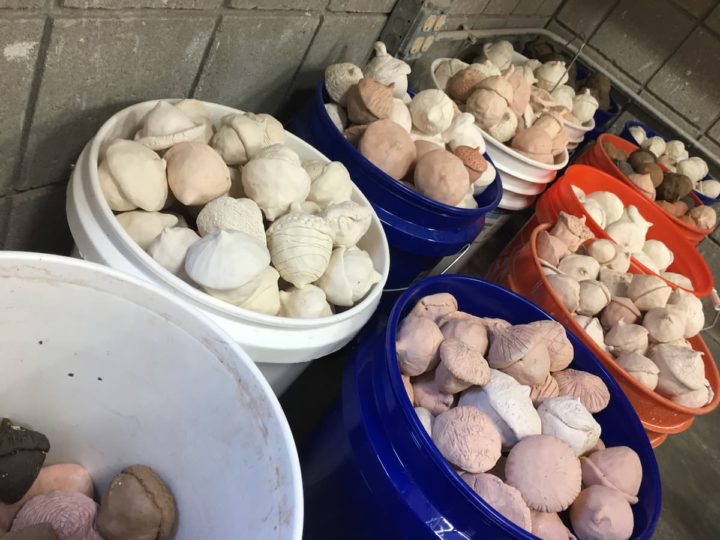 Clay acorns, which will be assembled into a flag for “United: The Acorn Project” at UCA.

Alberta Tucker, 89, remembers the days when African Americans had to answer a series of questions before they could register to vote. One of them, Tucker recalled: “How many jellybeans are in this jar?” If you couldn’t answer, you couldn’t register.

Tucker related this story to her daughter, Linda Morgan, and to Liz Smith, a ceramics professor at the University of Central Arkansas as they sat together in Forrest City crafting acorns in clay. “United: The Acorn Project” is part of Delta Sigma Theta sorority’s contribution to UCA’s Suffrage Centennial celebration of the 100th anniversary of women’s right to vote that started this week.

Smith chose the acorn to represent the seed of women’s growing influence on the political life of the country. But UCA has been careful to acknowledge that the suffrage movement didn’t provide the right to vote to all women: States continued to keep African Americans from the ballot box with poll taxes, literacy tests, fraud and other tactics. It took the 24th Amendment to the Constitution in 1964 to end poll taxes and the Voting Rights Act in 1965 to quell discrimination. (Vote suppression of the poor and elderly continues today in the form of requiring photo I.D.s, limiting polling places and hours, and more nefarious strategies like caging.)

The acorns, created in an array of skin-toned clays and which will be assembled into the form of the American flag, and will be unveiled to the public at 1:40 p.m. Tuesday, Oct. 20, on the Conway college’s Alumni Circle in front of Old Main. The acorn flag will be at the base of the flag poll and surrounded by the installation “Suffrage Rugs” by New York artist Sharon Louden and pages and enlarged prints from the CitiZINE project of UCA staff Lesley Graybeal and Kristen Spickard.

Events continue at 6:30 and 7 p.m. Tuesday, Oct. 21 with a “Suffrage Centennial Sing-Along,” led by Jaimee Jensen-McDaniel. Thirty microphones, spaced safely, will be set up in Alumni Circle and words will be projected on a giant screen for all to sing. The sing-along was inspired by suffragette history: Seymour said that when they weren’t allowed to speak, they sang, taking the songs of the day and changing the lyrics to relay their message. The event also features a video presentation of animated “Suffrage Rugs” and poetry by Sandy Longhorn’s creative writing students.

On Thursday, Oct. 22, Atlanta’s Core Dance troupe will premiere “Nevertheless She Persists” at 7 p.m. and 8:30 p.m. Thursday in front of Old Main. The Writeous Poets of Central High School will read important suffrage speeches, and models enlisted by theater student and costumer Jillian Gregory will illustrate how undergarments, as well as the law, constrained women with Gregory’s “Transparent Fashions” fashion show. 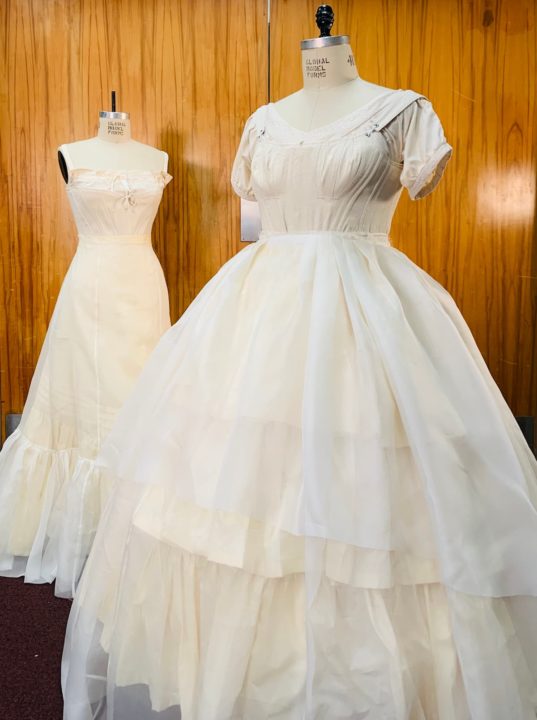 At 6 p.m. Wednesday, Nov. 4, a virtual broadcast of “Nevertheless She Persisted,” which is being recorded in the galleries of Crystal Bridges Museum of American Art, will be presented via Zoom. Core artistic director Sue Schroeder and Crystal Bridges curator Mindy Besaw will introduce the performance, highlight six works of art and engage in a Q&A afterward for Zoom guests.

It was spring 2019 when art history professor and Associate Dean Dr. Gayle Seymour began work on the suffrage project. “Since it is going to be seen against the drama of a national election, it will be the perfect opportunity for the arts to be entry points into this historical event,” she said, “and help us make a connection to the current voting situation.” At a chance meeting, Seymour enlisted Louden, the artistic director of Chautauqua Visual Arts at the Chautauqua Institution, to bring her “Shag Pool” rugs to UCA. Louden collaborated with six UCA students to combine rock, recycled colored mulch and colored glass into the renamed “Suffrage Rugs.” They address “the lesser-known voices of the suffrage movement,” Seymour said, including Mary Church Terrell, a member of the Delta Sigma Theta sorority, which joined the women’s suffrage movement at its creation in 1913. The members of Arkansas’s chapters of the historically black sorority contributed 1,000 hand-built clay acorns to the project, roughly a third of the total that will make up the flag.

Initially, Seymour, who has won seven grants, including one from the National Endowment for the Arts* to fund the events, envisioned sending UCA students out to work with various Conway groups, including Conway Independent Living Service, a homeless shelter and a retirement community. Ceramist Smith planned to organize women in groups reminiscent of quilting circles, where she and historians and volunteers would talk about the suffrage movement while making the demitasse-sized acorn cups.

“Then the pandemic happened,” Seymour said.

Undaunted — and in the spirit of the women’s suffrage movement, Seymour said — Smith made a video on YouTube in April to tell volunteers what the acorn project symbolized and how to make the acorns. Then she delivered 2,000 pounds of clay to sorority women and other organizations across the state. UCA students, including members of the campus chapter of the NAACP, also took part in the project. 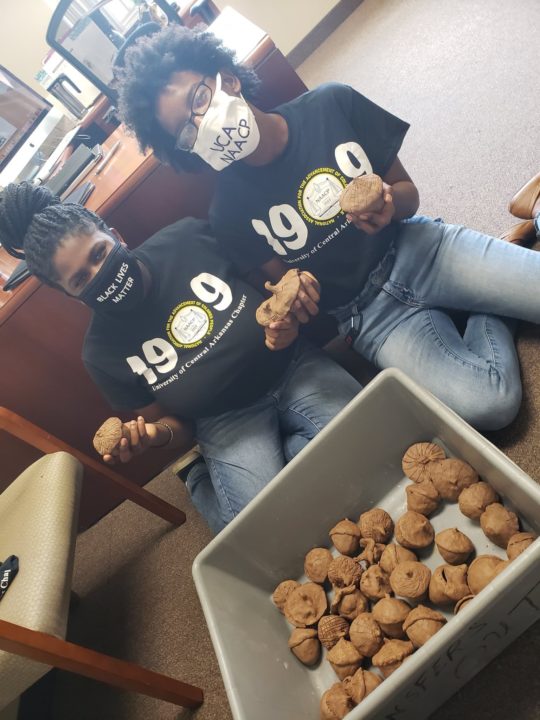 Emma Davis and Jada Williams, student members of the NAACP. with acorns they made for the Acorn Project.

Alberta Tucker, who helped make acorns for the project with her daughter and Smith, said her father, Albert Shears, took her to the courthouse to register when she became eligible to vote. Because he knew the importance of voting, he always had enough money to pay the poll tax. Daughter Morgan said Tucker “constantly reminded her daughters that if you have no voice, you have no power. “Know your power,” she told them.

For more information on the suffrage events, go here.

*An earlier version of this story said the grant was from the National Endowment for the Humanities. That was in error.

UPDATE: The University is now registering for the Zoom performance and live Q&A for Core’s performance of “Nevertheless, She Persists,” with original music by Christian Meyer, recently recorded at Crystal Bridges.

UCA has also posted links to see the events that occurred Oct. 20 (here and here) and 22.