Say you’re a reporter who doesn’t know a rack tom from a tomcat, or a snare drum from a sugarplum. There’s a rare source in Arkansas for the percussion-ignorant: Buffalo Drum Co. in Fayetteville, where Zach Coger and Darian Paige labor in a warehouse across the street from a brewery to build drums from hardwoods turned on a 1918 lathe.

Funk Factory musician and Smoothman Music Production owner Anthony Ball has a Buffalo Drum snare drum, and here’s how he would describe it to another drummer: His snare — “the drum you dance to” — is a musician’s “one-stop shop” thanks to Buffalo’s craftsmanship: Ball said he can tune it high for jazz, a “low boogie” for Southern rock; a middle pitch for gospel tunes. The sounds that the wooden — and not wood veneer — drums make are “authentic,” and Ball said he’s so “hooked” he hopes to buy a whole (sort of pricey) kit.

“I was shocked he could do that with scraps of wood,” Ball said of Coger’s work, and also surprised that the business was right there in Fayetteville.

Over at his shop, thumping on a shell and turning screws to change the tension and pitch on a drumhead, Coger explained how drums are tuned to a reporter who didn’t know that drums were tuned. “The shell has a pitch, it resonates at a certain pitch, that note you’re hearing,” Coger explained. The tighter the grain of wood, the higher the possible pitch.

Coger and Paige make every bit of their drums, right down to the brass lugs holding the tension rods. Beautiful as well as giving a good sound, Buffalo drums are constructed of 24 beveled staves of Ozark hardwoods — maple, walnut, cherry and oak — in the manner of a bucket or a banjo. Unlike veneer-sided drums, which are glued layers, the 3/4-inch wood staves allow for a richer resonance, Coger and Paige said. And because variations in wood mean variations in sound, “we typically try to make entire drum kits out of one tree,” Coger said, such as the black walnut used in the kit that The Cate Brothers played on the main stage at the Fayetteville Roots Festival in the before times, in August 2019. The drum kit — rack toms, bass drum and snare drum — was the first full kit assembled, serial No. 1 in the Buffalo Native Series. Another kit went to Jake Lynn, drummer for Texas country singer Jason Boland; the second, made of cherry, was being made for Northwest Arkansas jazz musician Darren Novotny. Six more kits were on order.

Coger, who said he was “obsessed with drums” as a kid, played with blues-rock band Shawn James and the Shapeshifters for a year. Then, as a teacher at the School of Rock in Bentonville and Rogers, he started bringing old drums to life, as he put it, working out of 200 square feet in a shed behind his house. Paige, who is also Coger’s partner in life, started working with him when she tired of the restaurant business. She gets a lot of kidding — “You can use a hammer?” — from people not used to seeing a woman in a drum-making shop, but her grandfather was a woodworker and she is “comfortable” there. In the four years since Buffalo Drum was established, Coger and Paige have turned out around 60 drums, they estimate.

Some of Buffalo Drum’s wood comes from cherry cut 70 years ago; it was given to Coger and Paige by a furniture maker. Paige said it takes about eight to 12 weeks to make a drum. Weeks must pass between cutting and stave-making for the wood “to reach equilibrium,” Coger explained. The final product is oiled. Affixed to the drums are metal Buffalo badges made at Shire Post Mint, another iconoclastic Arkansas business, located just up the road in Springdale. 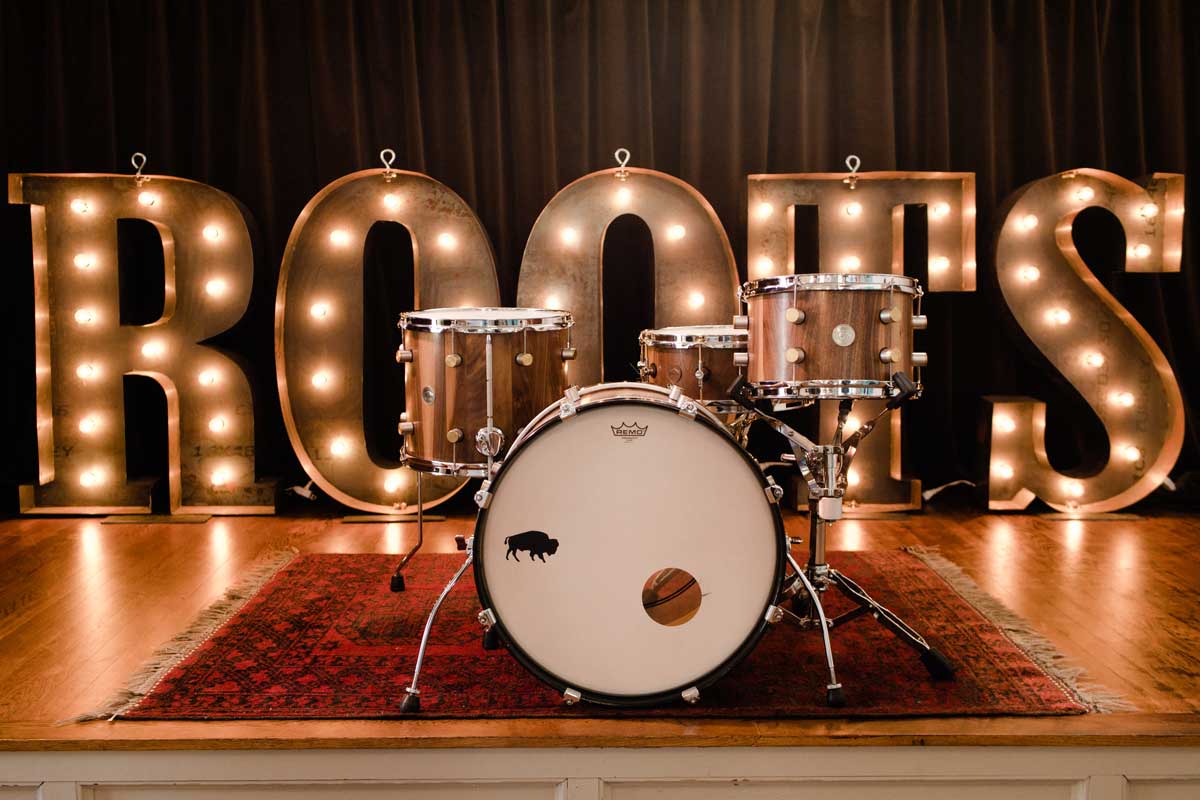 Hutch and Futch
A full kit is $2,500; snares alone are $850. Buffalo also makes custom drums in what it calls an heirloom series, which cost a bit more.

The COVID-19 pandemic has almost stilled live drum beats on stages across the state, and at one point Coger and Paige thought they might have to give up their fledgling business. “Our business model is based off musicians having money to spend,” Coger said. But, he said, he’s been lucky to have “good customers” who have helped out, giving Buffalo repair business and new drum orders that the buyers could have put off to another time.

Too, Coger said, he and Paige work in a process he calls “slow-made,” attending to detail and constantly tweaking their process. That means that even in a normal year, Buffalo Drum is not turning out drum kits left and right. But in a period of even slower-made, Coger remains optimistic. Though the year has been trying, “We’re feeling good about the future,” he said, which will include expanding the drum lessons they hold in the shop.