Read this month's issue
Browse the issue archives
Loading…
Advertisement
Home Entertainment ‘The Eyes of Tammy Faye’ not as inspired as is Chastain’s turn...

“The Eyes of Tammy Faye,” the new biopic of famed 1980s televangelist Tammy Faye Bakker, calls nothing more to mind than “Mommie Dearest,” the receding-from-current-cultural-memory 1981 biopic of Joan Crawford. “Mommie Dearest” was propelled to cult film status by Faye Dunaway’s full-throated transformation to the parental nightmare that was Crawford, and Dunaway’s acting plus the film’s wire hanger-wielding revelations equaled camp gold.

Likewise, Jessica Chastain’s performance as Tammy Faye is astonishing in every aspect and, most interestingly, comes from a place of honor instead of satire. Chastain, producer of the film, makes certain that we see Faye not as a zealous, eye-shadowed gargoyle but a fellow plucky performer and an empathetic, early defender of the LGBTQ community.

As an overall experience, “The Eyes of Tammy Faye” isn’t as inspired as Chastain’s turn — though it does have its moments. (And James Garfield as Jim Bakker matches Chastain scene for scene.) Chastain and director Michael Showalter gives Faye her earned redemption, but, at the end, the movie feels like an expert encyclopedia entry when it’s close to being much more.

Based on the 2000 documentary of the same name, “The Eyes of Tammy Faye” covers a lot of territory, aiming to be an origin story for this unique American creature. It starts with young Tammy, who was raised in International Falls, Minnesota, being drawn to her mother’s church (which she was barred from because she was a child of divorce) and soon rolling around on the church floor speaking in tongues. Faye’s stoic mother, played by a restrained but magnetic Cherry Jones, wears clothes drained of color and looks at her daughter as if she was beamed in from a more colorful, less mindful planet.

Faye’s meeting and falling for fellow Bible college student Jim Bakker and the pair’s early days on the road preaching the word (supported in large part by Faye’s puppet — yes, that’s right —  puppet act) is easily the best section of the movie. Chastain, her Betty Boop-ish voice pitched somewhere right below cartoonish, gives us a Tammy Faye who practically jumps off the screen with an infectious and ambitious spirit. Attracted to Bakker in part for his prosperity gospel views, Faye ignores her mother’s and her college’s advice against marriage. During the day, Faye makes her puppets out of old shampoo bottles and, at night, is enthusiastically rolling around in bed with her new husband.

The Bakkers prove to be a powerful team, catching the attention of Pat Robertson and his fledgling Christian Broadcast Network. Faye sees no reason to demure to the male power structure and, in a great scene, forces her way to a table where Robertson and Jerry Falwell (an intimidating Vincent D’Onofrio) discuss the Christian right’s newfound political power. Faye just wants to preach the good word to all while Falwell is spoiling for a culture war with homosexuals as his first target.

When the Bakkers start the popular “PTL (Praise the Lord) Club” and begin to swim in their newfound wealth, demonstrated in painstaking and eye-popping detail, the film stalls. Faye, who we’re told is shut out emotionally and physically by her husband, has an affair with a Nashville record producer and then becomes addicted to pain pills. Meanwhile, Jim Bakker tickles his male assistant and tries to find money to build the first Christian waterpark. 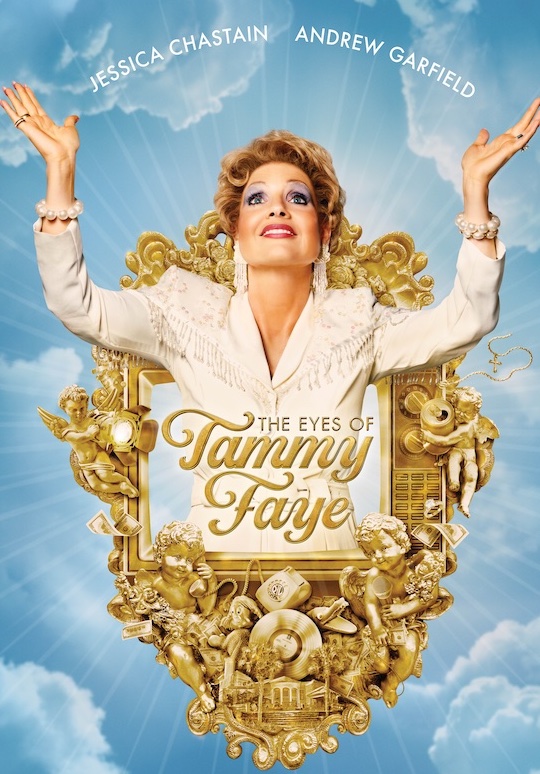 As we know, the whole shaky enterprise collapses. Jim is arrested and jailed and “The Eyes of Tammy Faye” lets its central character off the hook. Faye is depicted as an almost oblivious innocent while being swallowed alive in paid-for furs, ostentatious jewelry and eye shadow. Something more could have been made of Faye’s active participation in the money grubbing, though the film casts her as one more sad victim of Bakker’s schemes.

That said, Chastain’s admiration for her character never waivers, even as we see the older Faye making unsuccessful pitches to C-level TV producers and eating TV dinners by herself with her dog. Though “The Eyes of Tammy Faye” never really gets inside Faye’s Christian faith, it doesn’t look away, either. The many moments of humor don’t come, thank God, at the expense of Faye’s sincere beliefs and earnest prayers. Chastain does indeed disappear as she channels Faye in all her glorious weirdness. It’s an incredible act and one that might drive viewers to seek out “The Eyes of Tammy Faye” who would otherwise have no interest in televangelism or, for that matter, makeup.