Jimmy Doyle’s, the hulking honky tonk that sits just off Interstate 40 in North Little Rock, will be closing Saturday, Nov. 13. House musicians in the Arkansas River Bottom Band — Michael Heavner, Bruce Hearon, Joseph Logue, Ritchie Varnell and Freddie Martin — play the farewell party. Doors open at 7 p.m. “This isn’t the end of something,” a post on the Club’s Facebook page said yesterday. “This is a new beginning for The Doyle’s, to continue their work in all things country music in Arkansas! Just watch and see.” 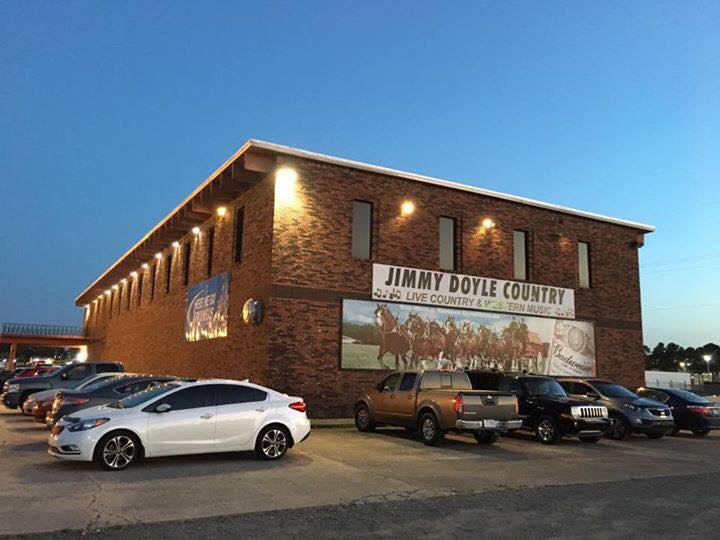 Hat tip to a near-half century of cigarette smoke and tall tales at the dance hall, which former Arkansas Times culture editor Will Stephenson captured beautifully in a 2014 profile on the club:

On a recent Wednesday afternoon, I met up with Jimmy Doyle himself, now 78 years old, at his bar, a place few have seen in the daytime. Originally built by Iranian immigrants, a family of grocers, the building is enormous and architecturally striking, with concrete walls 18 inches thick, faux-marble bathrooms (complete with ashtrays) and a metallic gate of ornate, Middle Eastern design over the front door. The closest other building, the place they send you if you forget to bring cash (they don’t accept cards), is a liquor store called, ominously, First and Last Chance. We met out back, where the remnants of the old sign — huge, wooden letters spelling out “Jimmy,” “Doyle” and “Club,” wired with 255 light bulbs — leaned against the side of the building. A tornado dislodged it a decade ago, though you can tell it must have been an impressive sight. Jimmy Doyle himself stood in the gravel lot, held out his arms and beamed, as if to say, This is it. He wore tight brown slacks, cowboy boots and a short-sleeve button-up print shirt featuring antique prop planes. “Come on in and I’ll show you around,” he said.

Jimmy Doyle, it should be mentioned, isn’t a first and last name — it’s a double first name, like Mary Catherine or John David. His family name is Brewer, as in Brewer Bottoms, the township 15 miles below Stuttgart where he was born in 1936. The son of a nurse and a moonshiner who “agreed to disagree,” as he puts it, when he was still a toddler, Jimmy Doyle was shaped by the place, a 12-mile circle of swamplands along Bayou Meto. After his mother left, he helped his father make whiskey in the woods, pumping the water and making delivery runs with a little red wagon. His favorite stories from childhood involve running from “the revenue men” on horseback. “It’s the only way we had to make a living,” he said, though it seems they often didn’t. Before he got out, he said, things got so bad that their kitchen was a 10- by 12-foot tent and they survived primarily off tree bark and “possum grapes” (similar to blueberries). He still remembers the day he joined the Navy — Dec. 6, 1954.

He wanted to show me around upstairs, an area he hardly uses anymore except as storage, so I followed him up the back staircase. The place was airy and empty, a concrete floor littered with memorabilia, holiday decorations and souvenirs from his various career ventures. It was an autobiography in junk: There were photo albums, books of handwritten lyrics, stacks of LPs, plastic Santas. He showed me the broadcast cameras he’d used for his public access TV show, “Jimmy Doyle’s,” back in the ’70s and ’80s. For a while there, he said, the show had been the heart and soul of his business, the thing that inspired him the most.

One room was filled entirely with small porcelain figurines — I counted four unicorns. By way of explanation, he said simply, “We went to Mexico a few times.” Then he showed me into his old recording studio, which featured vocal and drum booths, a 32-track mixing board and an old Fostex tape recorder. Brown shag carpet covered the floors, around which were scattered broken musical instruments and boxes of unlabeled tapes. Live wires dangled from the ceiling. I asked when he’d last recorded there. “Hell, I don’t know, 10 years ago?” he said. “I can’t keep track of time.”