At its core, this rom-com is a book about visibility. Dumond pays homage to the vibrance and resilience of queer communities in conservative areas as she casts a critical eye over traditions that exclude those communities. The book is also a love letter to Tulsa, a strikingly beautiful city when seen through Amy’s eyes.

Dumond, who now lives in Washington, D.C., took some time recently to tell us how the book came about.

Where did the idea for “Queerly Beloved” come from? 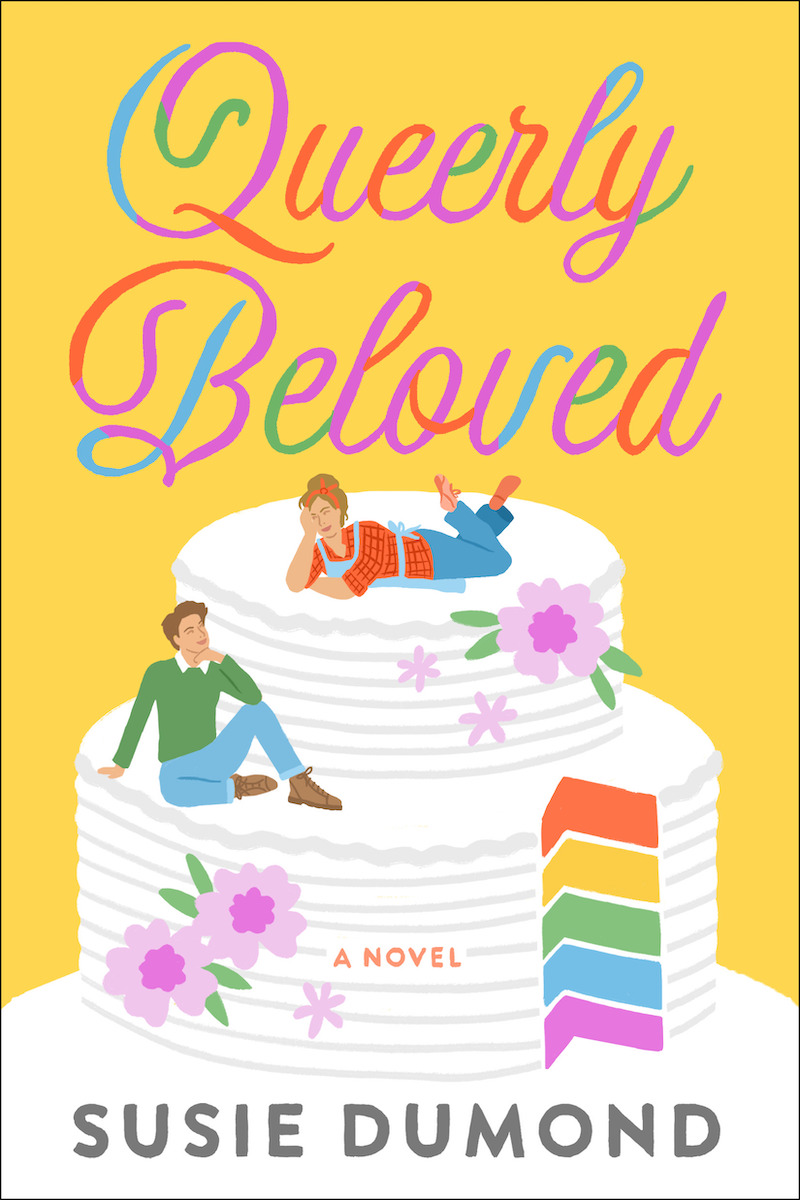 I’ve always been a fan of books, and I started writing about five or six years ago for Book Riot, which is an independent book blog. Through there I built a community of other people who were writing and gained some confidence to try writing a book myself. I didn’t really expect to publish it. I very much just wrote “Queerly Beloved” for me. So I wrote the things that I enjoy, the things I wanted to see. I really wanted it to be a queer love story with a happy ending that took place in Oklahoma, which is where I was in college and where I fell in love with my wife. I think so many of the queer love stories we see are set in New York or California, and I wanted to show this kind of middle-of-the-country love story where there is this wonderful queer community that people don’t necessarily always expect to see. I wanted that to be a big part of it. I also love baking, so I wanted baked goods to be a big part of it.

And just the wedding chaos. I had been to four or five weddings the year leading up to when I wrote this book, so I was very much thinking about how many different random things can go wrong at a wedding.

I took all of those things and tied them together to write a story that I would enjoy.

I think a lot about the conflict that we felt leading up to Obergefell v. Hodges, the [2015] same-sex marriage decision that made it legal across the country. And I think that there were so many interesting, complex conversations going on in the queer community at that time. And ones that we didn’t always necessarily hear. I think that there was this idea that when same-sex marriage was legalized, that was it, that’s gay rights, we’re good now. I don’t think at least the people that I knew at that time ever really thought that was the case. I think we always knew it was a lot more complicated than that.

You bring up weddings. There’s a lot of discussion in the book about how something so rooted in tradition can feel very exclusive for queer folks.

While I was editing this book, I was planning my own wedding, which ended up getting changed significantly because of the pandemic. It was on Halloween 2020, we’d been planning it for a couple of years for that date. Obviously, the universe had different plans. But I went to this wedding fair in D.C., which is where I live now. And I was like, oh, D.C. wedding fair. It’s gonna be so gay. It’s gonna have, like, all kinds of queer stuff. And it was not. It was still very, very steeped in heteronormative traditions. But the thing I love about queer weddings is that you really can take all the traditions that you feel like you have to do as part of a wedding and say, well, we’re already breaking some rules here. So why don’t we just make this an event that we want it to be?

What was the significance for you of incorporating baking into the narrative?

I feel like my Arkansas roots are a big part of the baking in this book. Food has always been my love language, like when you care about somebody and they’re going through a hard time or they’re celebrating something, you always show up with food, right? That’s something that my Arkansas mother taught me, and I know that my mom and I bonded a lot over baking and cooking together. And I’m still a very passionate self-taught baker. I worked very briefly at a bakery in college but I did not have the skills that Amy in the book has. But I have attempted  something similar to pretty much everything that she bakes in the book. I think that for Amy, baking is a creative outlet and it’s something that she’s good at, and she is deeply a people pleaser.

What about the romance in the book? How did you develop the relationship dynamic between Amy and Charley?

I think a lot of the personal growth journey for Amy, the protagonist in the book, is that she is a people pleaser, and she’s so often trying to change herself to make whoever she’s around happy rather than putting her own needs first. So, she’s a lot of fun. She’s very talented. She cares a lot about the people in her life, but she’s running on empty a lot because she’s so often pushing herself and what she needs back. I really wanted to find a relationship for her and a partner for her that balances that and can teach her the value of bringing your full self to whatever you do. So there comes Charley.

I’m an astrology person, so I’m going to explain it in astrology. Amy is, I consider her a water sign, a Pisces, she’s very emotionally intelligent but often pours herself into other people. And Charley is a Taurus. She’s an earth sign. She’s very grounded. She says, ‘This is who I am and you like it or you don’t like it and I don’t really care. It’s not going to change how I behave.’ So being able to have that quality in Charlie that she doesn’t bend to what other people want from her, that she believes in herself and the things that are important to her, Amy can learn from that and put aside some of her people pleasing.

What’s next for you?

I actually have a two-book deal. The first book of the two-book deal is called “Looking for a Sign.” It’ll be coming out sometime in spring 2024. The protagonist is a minor character in “Queerly Beloved.” It’s set 10 years later, so more current day, and it’s a queer woman who’s recently out of a longterm relationship, and she really wants to start a family, so she’s looking for her soulmate as fast as possible. She visits an astrologer who tells her to go on a date with one person of each astrological sign to find her perfect match. And it’s set in New Orleans. There’s a lot of astrology, kind of mystical stuff going on.

So I love this book. I’m deep in the middle of edits right now. I don’t want to say I love it more than “Queerly Beloved,” but I know that my writing process has changed a lot and I feel like it’s different in a lot of ways but has a lot of the same heart and community sensibilities about it. The third book is set in Eureka Springs, which I’m very excited about. I grew up going there a lot. And it’s such a weird, artsy little mountain town with so much interesting history. It’s gonna be a really fun setting for a book.

One thing that stuck with me in “Queerly Beloved” was Amy’s and her friends’ thoughts on queer people staying in red states as a radical act. Do you have thoughts or advice for queer youth coming into their own in places that don’t necessarily accept them?

I will say it was a complicated issue for me to write about because I’m someone who did move away. I live in D.C. now and I have for almost eight years, and the truth is that a lot of parts of my life got easier when I moved here. Like, I don’t have to worry about who’s watching when I’m holding hands with my partner on the street. I don’t have to worry about politicians actively trying to take away different rights that I have. I don’t have to worry about some of those things. But also I do still have so many friends and family that stayed in Arkansas and in Oklahoma. And I do think that it’s a revolutionary act, but I don’t think that you’re a traitor to the cause if you move away. I think that everybody has a different journey and a different purpose. But I do think that community is such a huge, important part of life in a red state as a queer person, and I know that growing up in Arkansas, I had this amazing community, particularly through theater, that I had queer people of all different ages and people who came from all different parts of their lives to learn from and to create this safe space for me to explore who I was. I don’t know who I would have been without that. I think that it’s so important to have people who understand how hard it can be to live there and just kind of support each other and create these places for you to thrive, no matter what kind of politics are going on outside of that space.

Just because you’re protecting yourself and your physical safety in a place that’s not always safe for you doesn’t necessarily mean that you’re not living as your truest self. And I don’t think that if you find yourself kind of living halfway in and halfway out of the closet it makes you any less of the queer icon, magical unicorn that you are. Everybody has a different path, and I think that as long as you are finding the people who love you as you are and creating a space to be truly yourself, even if it’s not all the time, that is a powerful and radical act.

I have spent so much time dreaming of that, and you’ll see in the epilogue. But Amy is so passionate about weddings and about people celebrating their love in the way that they want to celebrate it. So I see Amy as running a queer wedding planning company in Oklahoma and maybe traveling regionally. I see her all over these red states helping queer couples especially, but anybody who wants an out-of-the-box weird wedding that celebrates their love, however they want to celebrate it.

Anything else you want to add?

I do want to hit one more time how much I love the community that I had in Arkansas and especially in theater. I grew up doing shows at the Rep and at the Weekend Theater and some other places around town, and I feel like that was such a great place for me to play and to learn more about myself and about the world around me and step into other people’s shoes and perspective. That taught me so much about storytelling, which ultimately, I believe, led me to become an author. The work that I did in theater and the way that I explored all those different lives, I think that was hugely important for my journey of becoming a writer. And you know, the queer people I met in that process obviously really shaped my life. So the Arkansas theater community has a big part of my heart.