What does MD stand for, and where and how did you grow up?

The initials of my name. I’m a junior, so I just go by the initials. I was born in Jacksonville and grew up in Cabot and Lonoke, that is where my family is from and lives. I try to take care of my family as much as possible. I did not grow up fortunate, and now I am very fortunate, so I try to give back to them. I was never miserable about my race or my sexuality because I just didn’t care. I’ve always been one of those people who thinks, “You can like me or not like me.” My mother instilled that in me. I don’t let things bother me; I just keep on trucking.

How did Athena Sinclair [Hunter’s stage persona] get started in pageants, and what are your duties as a winner?

Just being a drag queen, which in Arkansas is a huge deal because gay pageants got started here when Norman (Jones) started Miss Gay America. It’s the thing to go to when you do drag. I started by performing at Discovery (Night Club) and found that I was really good at it, so doing pageants was the logical step. I won Miss Gay Arkansas on my first try and am the first Arkansas winner to score in the top 10 of Miss Gay America in over 15 years. My main job is to encourage people to come and support the pageants. I feel I’ve done a good job with that. And I’m always available to help those coming behind me. I help them perfect their walk and presence. I tell them that it takes time to make it into the top pageant tiers.

Who puts you together, and who funds it?

My dresses for Miss Arkansas and Miss America were designed by JD Martin from Dallas, THE gown designer for gay pageants. He is very picky about who he works with, and I am truly blessed that he wanted to work with me, mainly because he loved my politics. I fund it. I spend a lot of money in pageantry. I do have multiple sponsors who contribute some, but most of the cost comes from me. I spent over $15,000 on Miss America alone! I was lucky that the Miss Gay America pageant was in Little Rock last year for the first time in many years, so that saved me the cost of traveling. I was also lucky that I could hire local talent to help me, and that saved a lot, too.

What did you do for your talent?

I did a Black history talent. Being so involved in the BLM movement and local politics, I thought it would be great to be myself and bring that into my talent. I began as a Black queen who was dragged into slavery, and then, as a two-part talent, I portrayed the Martin Luther King Jr. era and Black Panthers, then became a Black female president and brought local politicians on the stage with me. It was so well-received. 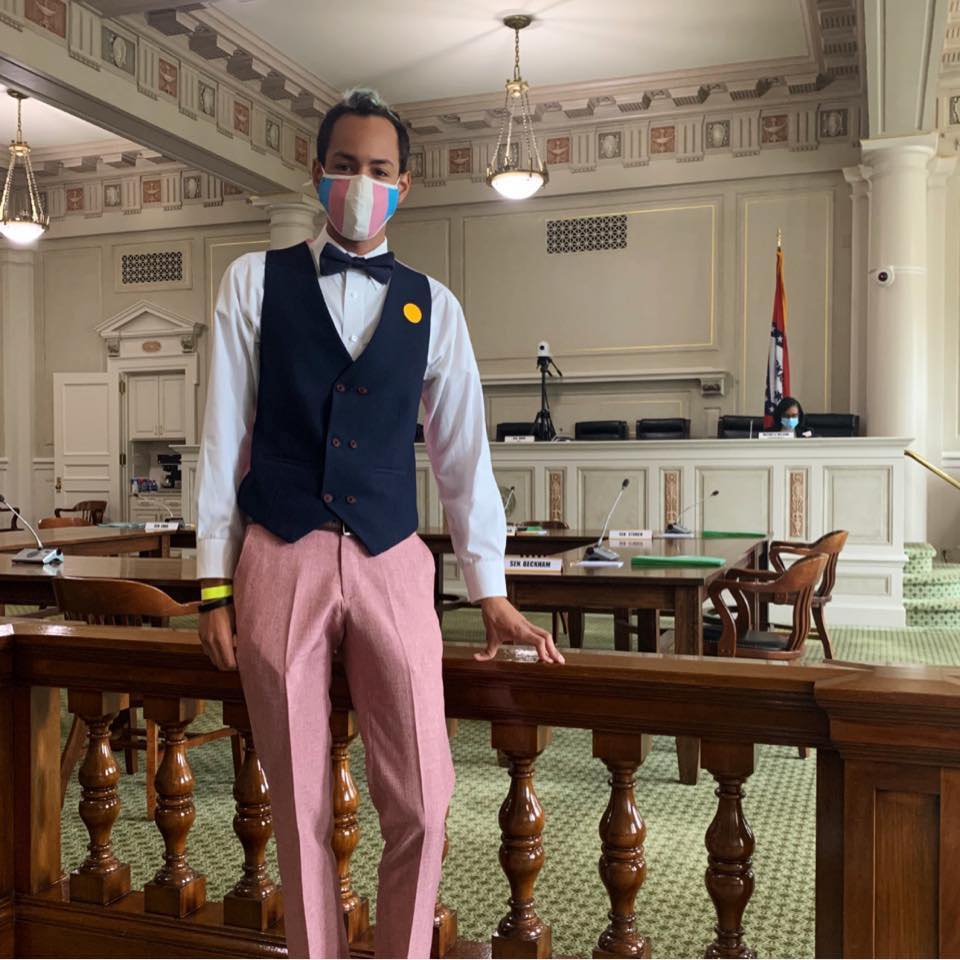 MD Hunter in the Old Supreme Court chamber at the Arkansas Capitol, advocating for the rights of transgender youth.

How did you become a political advocate and activist?

It was unexpected. When all the BLM stuff happened after George Floyd, I went to a protest. It was the first one we had in Little Rock, and in Arkansas. The LGBT community was there, and a lot of them asked me to speak to the crowd. I realized I had been training for that my whole life. Being a performer, I found speaking to a group was something I was really good at. Then I got so deeply involved in the (BLM) movement, and realized I needed to get inside the movement; not let them make all the decisions. Now I’m involved in many campaigns, helping candidates in any way I can. This is one of the reasons I stayed in Arkansas. I want people to see that, hey, I’m a drag queen and I can be involved in politics. I want people to see that they can be involved no matter what their background.

With your focus on politics, what happens to Athena Sinclair?

My plan was to retire, but there are some things I want to do first. I’m going to do some pageants I didn’t win. I’m going to go back to Wessland in Atlanta. I did Miss Wessland right before COVID and lost by two points! I want to do Miss Continental in Chicago, a huge dream of mine, and the one I studied to learn to perform. It is also one of the only trans pageants. I absolutely do not want to do RuPaul’s Drag Race because I want to make my mark in the community without TV. I have only performed in the community, and I’m known all over the country.

What made you launch Hair Witch?

I wanted to create my own wigs. Part of my legacy is that I want to do everything myself. I wanted to do my makeup, design my gowns, and the next thing was obviously hair. I can sew and I go all over the county to do makeup. I didn’t want to do hair at all, but I just started messing with wigs and found it easy. Sometimes I make the wigs and sometimes I buy a wig and make it into something. It all depends on what the customer wants. I use social media, and my wigs go viral all the time. I hope to open a storefront soon.

You recently did the wigs for the Arkansas Rep’s “Into the Woods.” How did you land that job?

One of my friends told me the Rep was looking for someone to do hair and gave them my name. I never expected this because I wasn’t a theater kid. I pre-formed the wigs and taught the cast members how to handle them so that I didn’t need to be at every performance. One of the wigs I did was a 16-foot braid. I had never done that before! Seeing my name on their banner was just amazing. Then I got a call from a theater in Northwest Arkansas and did their wigs, and I even got a mention in Broadway World!

I always thought I would leave Arkansas. Sometimes living here sucks, you know? But I love Arkansas; it’s my home. Little Rock is a big city, but it’s not. I travel every other week to big cities, but I love coming back. It’s great to get out there and see the country and the world, see the different drag shows and the culture they bring to it. But being here is where I want to be. My vision of Arkansas has evolved. I learned from doing drag and pageants to always let the audience see my eyes so that I can connect with them, and that translates well into politics. I have big plans for the future. I want to give back to my community, to show people that no matter your skin color or sexuality or whatever you are, you can still be successful and happy. I want to be so successful that I can give back to my home, the place I love.