Read this month's issue
Browse the issue archives
Loading…
Advertisement
Home Entertainment AE Feature The Pound of Underground Sound: Rural War Room has been keeping the...
ANALOG AMBASSADORS: Byron Werner and Donavan Suitt of Rural War Room play nothing from a digital database. For their weekly radio show, they bring in hard copies of the music, mostly weird stuff on vinyl, and keep record players at the ready in large suitcases. Brian Chilson

Try to say this five times fast: Rural War Room.
If you’re like most people, you either stumble within the first couple of tries, or hesitate in order to prepare yourself to utter it. The words make your lips do something out of character. Your brain might even do a tiny somersault. You’d wonder why anyone would call themselves something so difficult to say. I found myself doing the same thing when I received the assignment to interview a duo of underground radio hosts who take the airwaves every Tuesday at 7 p.m. on KABF-FM, 88.3 as Rural War Room. What makes this show different is not just the difficulty in the name, but also what’s entailed in getting the music out. Rural War Room plays nothing from a digital database. They have to bring in hard copies of the music, mostly weird stuff on vinyl, and keep record players at the ready in large suitcases.
By some stroke of serendipity, I’d purchased a Victrola record player a few days before meeting the men behind Rural War Room, Donavan Suitt and Byron Werner. We decided to meet at a restaurant downtown. If I were to visit during their radio show, it’d be cramped, hot, and they’d be too busy to answer any questions or even acknowledge my presence. During a show, they’re constantly moving, and they never play the same thing twice, unless it’s by request.
“We don’t know what the other guy is going to play,” Werner said. Twenty years older than his co-host, Werner was wearing thick black glasses with a shape as unique as his taste in music. “We were both collecting weird stuff, but just from a different generational point of view.”
“Dotty Oliver from the Little Rock Free Press introduced us,” Suitt said. “And she was like, ‘I know a guy who has more records than you.’ I said, ‘Oh yeah!?’ ”

Suitt gets most of his records from traveling, while Werner’s collection has grown from being in Los Angeles all the time. Before moving to Little Rock, Werner worked in movie lighting, and not just any kind of illumination. His first job was doing light design for a little space film called “Star Wars.” He then went on to create the proton beams for “Ghostbusters,” the light effects for “Titanic,” and the interdimensional electricity in the cult classic, “The Adventures of Buckaroo Banzai.”
Suitt has a background in theater and spent his own time in L.A., nearly crossing paths with his future co-host many times. Carrying their individual passion for music and sound, they finally met up here in the capital city, where Rural War Room formed in 2005, both as a radio show, a record label and a band. Off the airwaves, they perform live electronica. Synthesizers, hand-spun vinyl records, home-made instruments, drum machines, modified toys and live vocals make up just some of the sounds. Watching one of their live shows may evoke a combination of performance art, “Stomp” the musical and new-wave rock band Devo.

“They [Devo] have an international convention every year,” Suitt told me.
Werner nodded, “Called the DEVOtional.”
“For a while we were a part of the fan club,” Suitt said, “and all associated people put out a CD of cover songs by different groups. And our job was to recruit different bands like The Transistors out of Rome, Italy.”
They even headlined the DEVOtional convention in 2015.
Well, technically, they were the last group to perform that night, but all three of us agreed that if that doesn’t define a headliner, we don’t know what does.
So what’s with the name? Even their record label has the same moniker.
It’s Werner’s doing. “I like the sound of the language rather than what it’s talking about.” 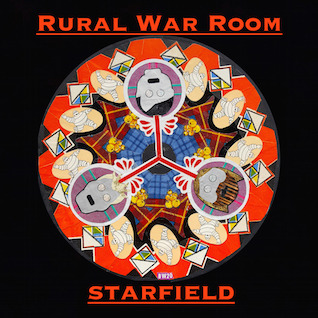 For the first week after they named the show, they would go out drinking and repeat the name to themselves, appreciating how it felt in their mouth. For the same tongue-twisting, phonetic reasons, they named their first album “Ring-a-Ding Orangutan.” Suitt pointed to his shirt, which displayed the psychedelic, tie-dye spiral of the album’s cover art.
But outside of their own creative endeavors, they’re curators of music that nobody’s ever heard of. They do their weekly show for free, sometimes even having to bring in turntables just to get the sounds on the air. It’s fueled their record-collecting habit, and when they discover something really good and really weird, they can’t wait to play it for their listeners.
“A lot of people say we’re like Dr. Demento,” Suitt said, “but we’re not, because we play way too much cool shit to be Dr. Demento.”
If you’re not familiar with Dr. Demento, he’s not a physician, but a radio host. Known to play goofy novelty songs, he most famously was the guy who discovered Weird Al Yankovic.
“He plays funny ha-ha,” Werner said. “We play funny odd.”
And it seems to be working. They’re syndicated across the globe, from Switzerland to Oregon.
I spent three hours with these guys, eating General Tso’s chicken, drinking Sapporo beer and talking about vinyl records and bad movies. As I’m sure they hope the same for their listeners, I felt inspired after our meeting and decided it was time to add some records to the Victrola I’d just gotten. Heading down to a local flea market, I took Werner and Suitt’s record-hunting advice and searched until I found exactly what I didn’t know I was looking for. My first record? “New Traditionalists,” by Devo.

Catch Rural War Room live every Tuesday from 7-11 p.m. on KABF-FM 88.3. In Hot Springs, you can listen to them on KUHS-FM 102.5, Fridays from midnight to 4 a.m..
Follow Werner and Suitt’s endeavors on Spotify and other streaming services, and at ruralwarroom.com.