This year marks the 113th season of live racing at Oaklawn in Hot Springs. Oaklawn is not only Arkansas’s only Thoroughbred racing venue, it holds title as one of the top tracks in the nation. The venue, which is located at 2705 Central Avenue, is open year-round for simulcasting and electronic gaming operations and features live racing from January through mid-April. The 57-day live racing season began on January 13 this year.

”We are unique in the racing industry in the fact that we are in a small resort town,” said David Longinotti, director of racing at Oaklawn. “The people of Hot Springs are great racing fans. If you are an owner or a trainer and you come in and go out to a local restaurant, people know you. I recruit all these horsemen to come here; that is one of the things I do during the off-season. I liken it to being a college athletics recruiter. All I’ve got to do is get them to visit once, and they want to come back. It’s the community. Hot Springs is a unique place to visit and the community really gets behind racing. I think this is the best horse racing town in America.” 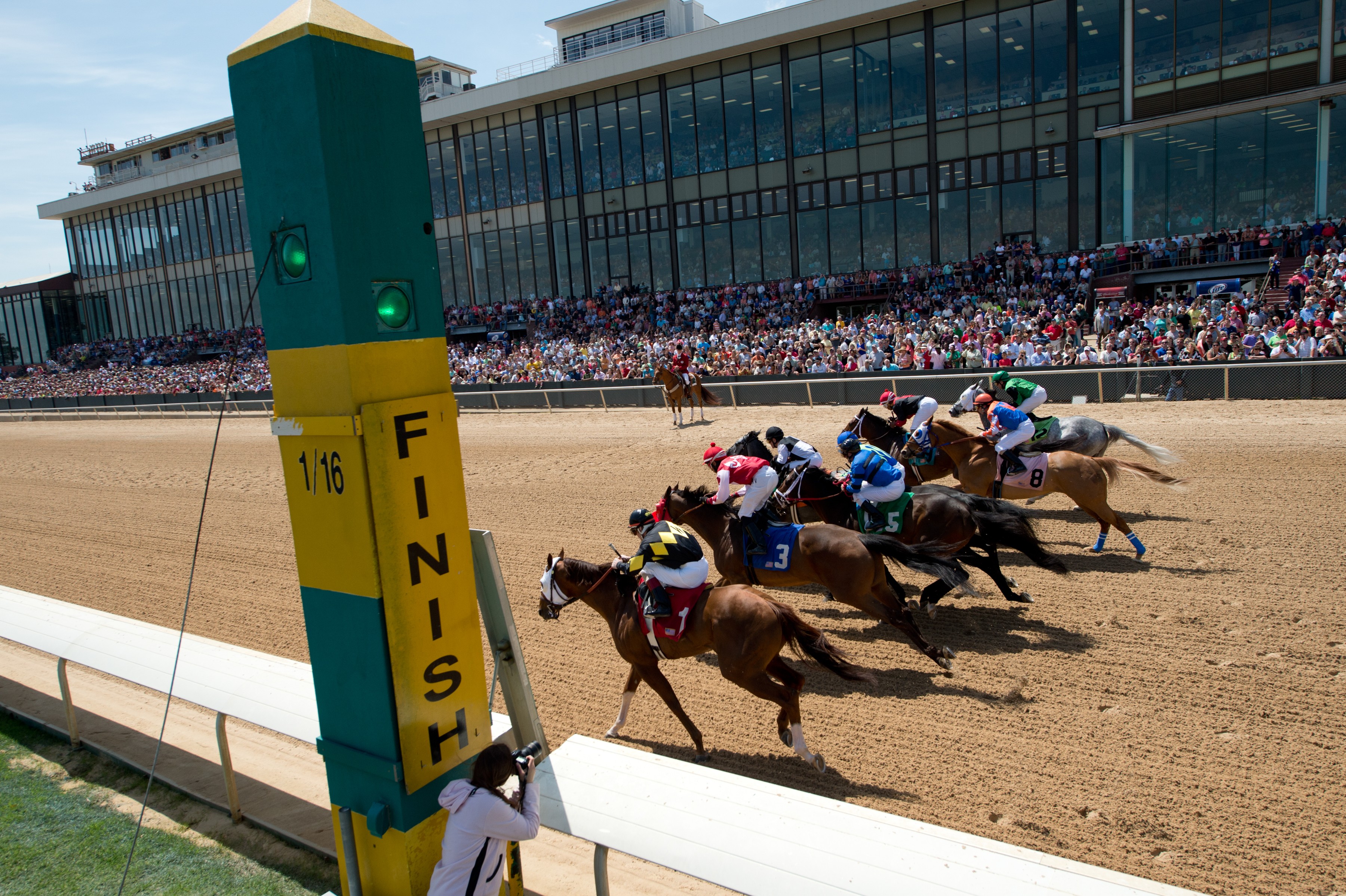 Fans will be greeted with a new voice calling the races this year. Vic Stauffer, who is from California, replaces former announcer Pete Aiello, who took a position at another track. Stauffer, who started his career in the mid 1980s, will be the sixth announcer Oaklawn has had since the track opened in 1904. “He’s called over 40,000 races and is a veteran,” Longinotti said. “He’s extremely descriptive in his races and exceptionally accurate. He’s one of those track announcers where if you are not watching the race, if you close your eyes and listen to him, you can envision the race in your head.”

Known as the home of the Racing Festival of the South and Arkansas Derby, the track has been a place to see a range of standout champion horses over the years. American Pharoah won the Arkansas Derby here in 2015 on his way to a memorable Triple Crown win. Last year’s Arkansas Derby winner, Creator, went on to win the Belmont Stakes. Other legendary horses that have left their mark at the track include Zenyatta, Curlin, Rachel Alexandra and Smarty Jones. 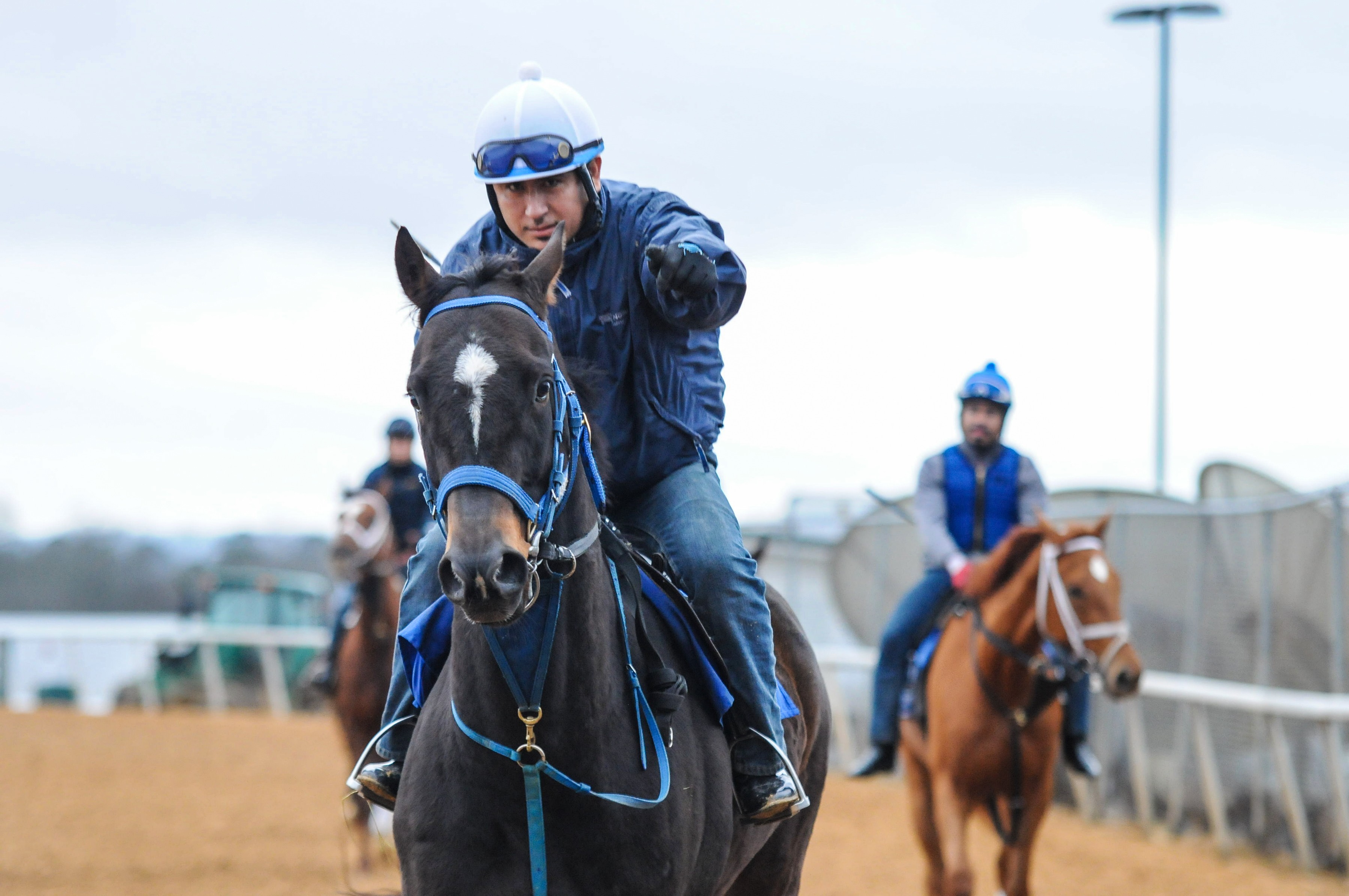 A venture to Oaklawn is also a chance to see premier jockeys practice their craft. Jose Ortiz, who was the winningest jockey in the country for 2016, is scheduled to ride at the track opening weekend. It will mark his first time to race in Hot Springs. The bulk of Oaklawn’s jockeys from the past few previous years will be returning to race this season including Ricardo Santana, Jr., who has been the leading rider at Oaklawn the past four years and won the Arkansas Derby last year; Hall of Fame rider Calvin Borel, who has won three Kentucky Derbys; Jon Court, who has won the Arkansas Derby twice and recently earned his 4,000 career win last month in Kentucky; and Alex Birzer, who is likely to land his landmark 3,000 win at some point this season. “We have kind of become the milestone riding place,” added Longinotti. “Calvin Borel got his 3,000, 4,000 and 5,000 wins here.”

The paddock, which is located inside the main facility, is where the horses are saddled and viewed before they race. A venture there is a good chance to see both the horses and jockeys. 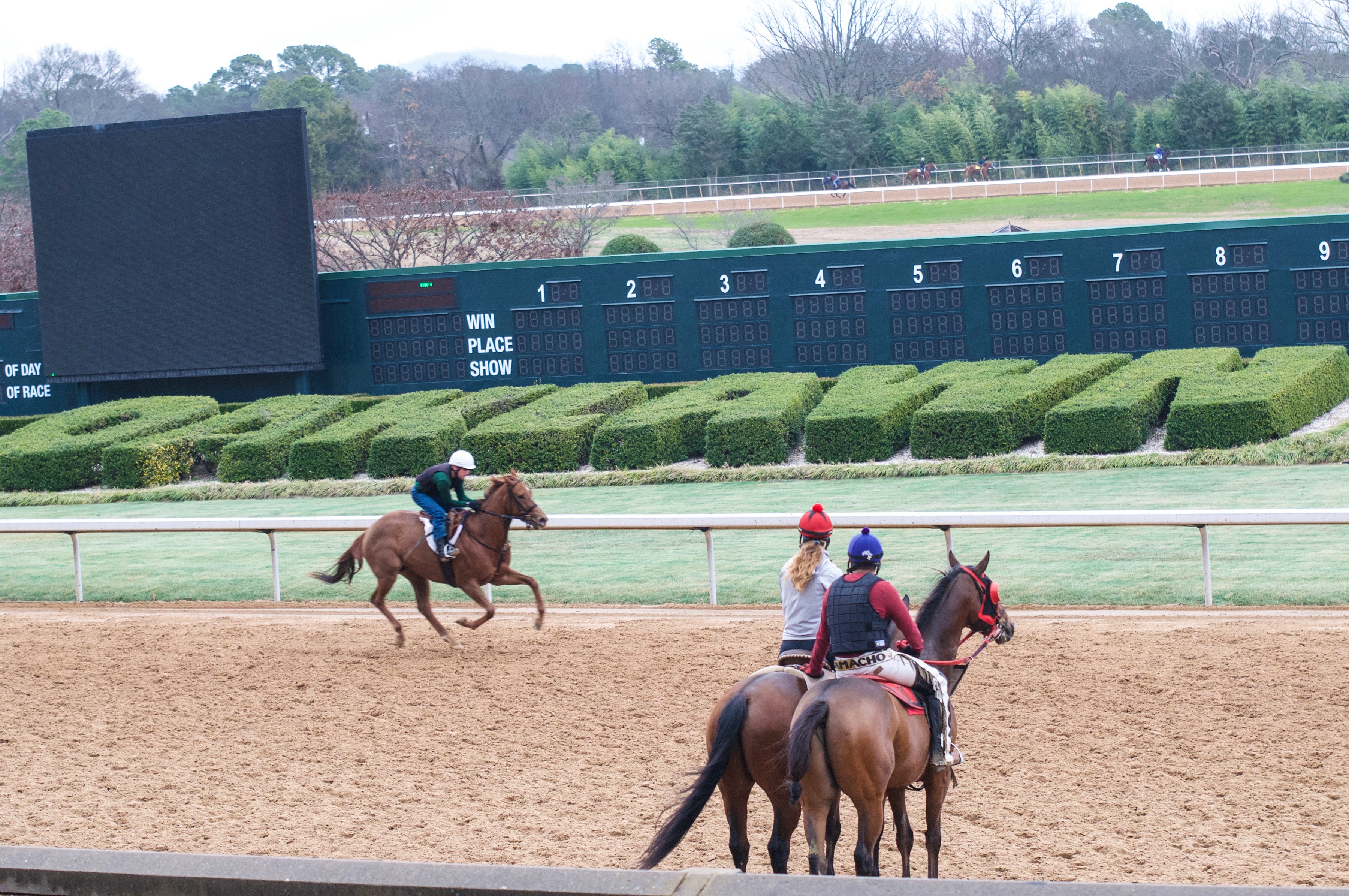 “At Oaklawn we have the gaming area to help support racing and we are proud of what we have done over there,” Longinotti said. “We are also proud of what we are able to maintain on the racing side.”

New racing amenities making a debut this season for fans include user-friendly stand up machines to wager on, updated displays on the infield, a new TV wall inside the main facility, a new high definition screen in the infield and a new box seating area. 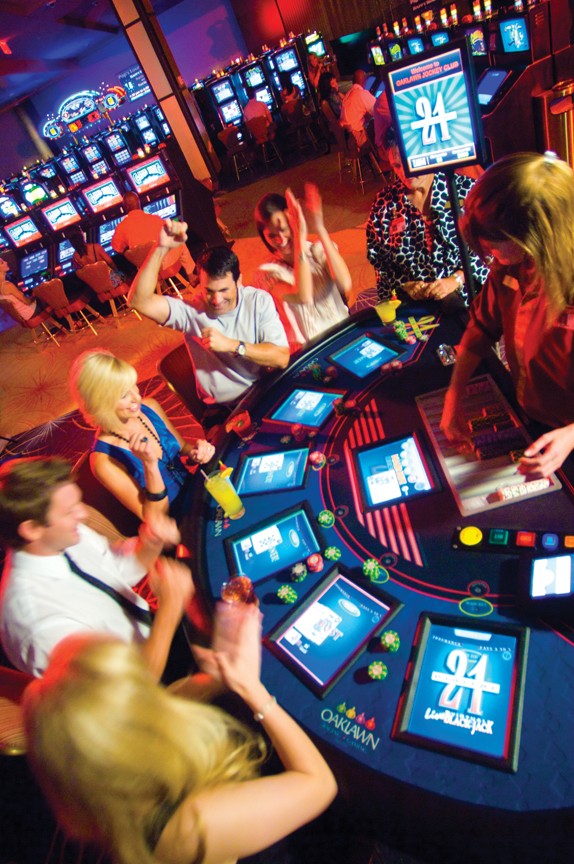 This season Oaklawn is also introducing an incentive to help welcome newcomers to the racing scene. “We are unlike a lot of race tracks in that we get a lot of casual racing fans, people who come to the races once or twice a year and who are learning the sport,” said Longinotti. “One thing we are doing for that group this year is something we are calling the Show Bet Bonus. What it means is we want people to [experience cashing winning] tickets. The easiest ticket to cash is the show bet. That is what you cash if your horse runs first, second or third. So what we are doing is providing a bonus to people who bet to show.” Of note, this is only available to those who are onsite at the track.

Another outlet the venue has to learn about the sport is Dawn at Oaklawn. Beginning February 18, this free program takes place from 7:30 a.m. to 9:30 a.m. every Saturday morning, weather permitting, during the season. It is a tour of Oaklawn’s barn area, where you can watch the horses train and interact with those close to the sport including jockeys, trainers and owners. The program is led by Hot Springs native Nancy Holthus, who is a paddock analyst at the racetrack and wife of horse trainer Paul Holthus, who is also from Hot Springs. “It’s a great opportunity for people to learn about the sport and get up close with some of the key participants,” said Longinotti. 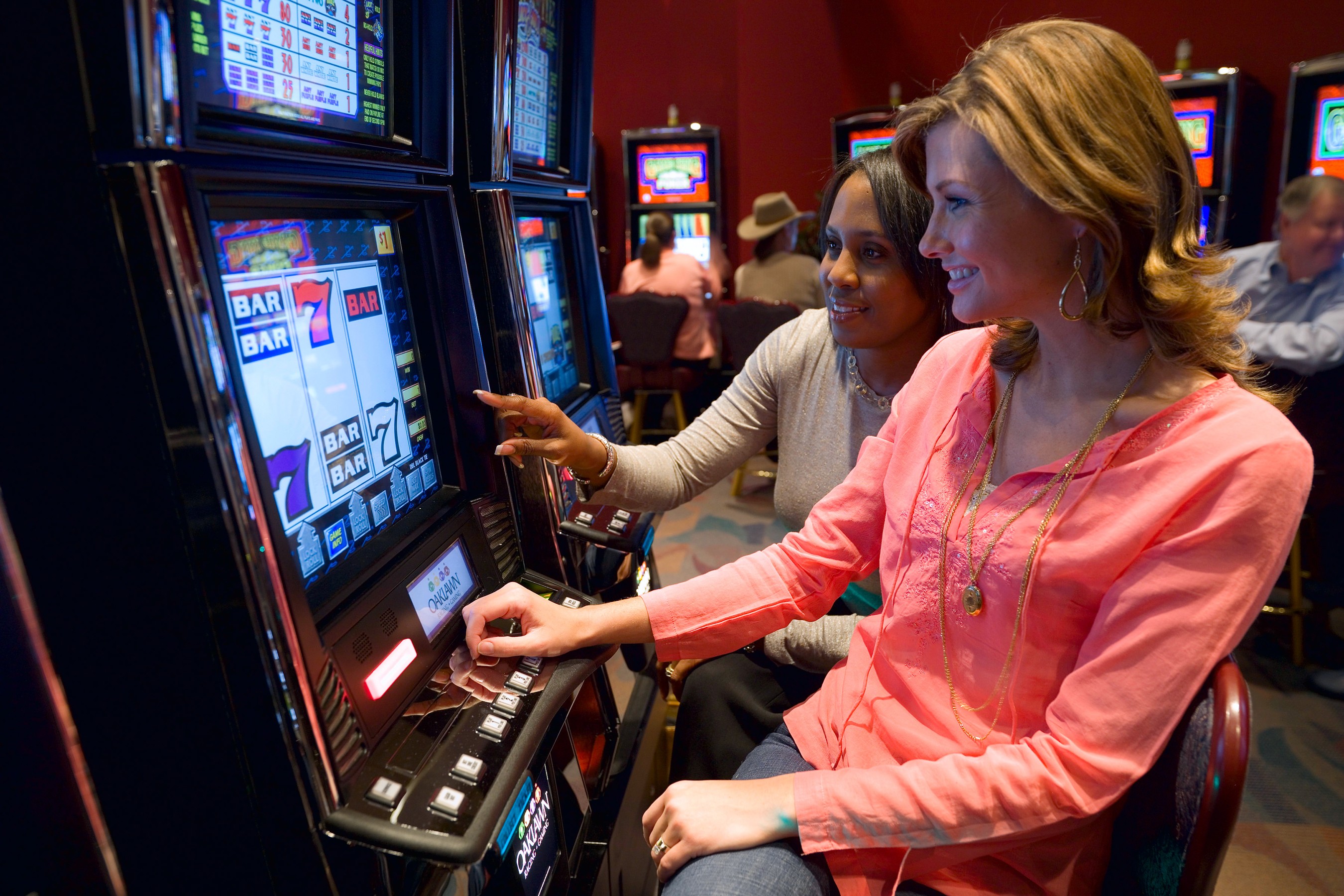 This year’s live meet season runs from January 13 to April 15. Races run from Thursday to Sunday, with gates opening every race day at 11 a.m. Of note, there will also be racing on two holiday Mondays, January 16 and February 20, as well as on Wednesday, April 12. For more information, visit Oaklawn.com or call 501-623-4411. For more information on places to visit in Hot Springs and around the state, visit Arkansas.com.