Ask five Northwest Arkansans what they most closely identify with local culture, and you’ll get five different answers: Arkansas Razorback sports. Epic cycling trails. Walmart founder/regional benefactor Sam Walton, maybe, or the mighty Buffalo, America’s first national river. There’s a magnetism specific to the lush, sweeping southern Ozarks, where the Boston Mountains support rolling plateaus, and whatever has drawn people to them, it’s kept them there. Northwest Arkansas’s population, much of it lured here by the business interests of Fortune 500 companies like Walmart and Tyson Foods, boomed over the last three decades, and with that growth came artistic (and artisan) riches in all forms: world-class art, a regional symphony, creperies, chocolateries, High South culinary ventures, niche theater troupes and a proliferation of craft breweries.

Here’s a schedule for 36 hours in the Ozarks:

Get lost in the stacks

A tenth of a mile separates two of the best independent bookstores in Arkansas, both hefty on inspiration and light on the wallet. The stalwart Dickson Street Bookshop (325 W. Dickson St., 479-442-8182), a 40-year-old Fayetteville fixture on the main cultural thoroughfare in town, is a dusty, boundless labyrinth of used and rare finds where the bookkeepers are always ready to talk shop. Around the corner at Nightbird Books, (205 W. Dickson St., 479-443-2080) you’ll find volumes of Ta-Nehisi Coates’ “Black Panther” series mere feet away from cookbook displays and a copy of Allan Zola Kronzek’s “Grandpa Magic.” Don’t overlook the floor-to-ceiling octagonal birdcage, the store’s namesake pets fluttering around inside.

Sip on the bean or the barley

A Friday afternoon on vacation is no time to waffle about whether to caffeinate or imbibe; Puritan Coffee & Beer (205 W. Dickson St., 479-301-2365) settles this debate. An elevated patio affords taproom patrons an eagle’s-eye view of bustling Dickson Street, and purist delights like espresso come with notes on bean origin, process method and the brew’s palate. Twenty-plus craft beers make up the ever-revolving draft menu, and rotate so quickly the taps are each flagged with a clip-on index card. Those bulging black vacuum-sealed cubes of coffee stacked on the Puritan shelves? Those come from Onyx Coffee Lab (2418 N. Gregg Ave., 479-444-6557), the mad scientists of Northwest Arkansas coffee culture. Onyx takes its craft dead seriously: A Day of the Dead-style skull print in the restroom hisses the words “Small Batch,” and the origin story on the Onyx website is a stultifying 1,600-word manifesto. Check out the “Adventure” section of the coffee menu, where you’ll find brews accented with bone broth, activated charcoal and black salt.

Dine at a beloved Fayetteville dive

Anyone who ever lived in downtown Fayetteville long enough to have paid a month’s rent can likely still rattle off their go-to dish at Hugo’s (25½ N. Block Ave., 479-521-7585), the venerable below-ground cafe at the eastern end of the Campus Corridor. Once a typewriter shop and still a cavernous basement, Hugo’s specializes in dynamite Angus burgers cooked as rare as you fancy, hand-cut fries and house-made quiche. Let your eyes adjust to the red glow emanating from the neon signs on the basement walls, order something strong from the bar and finish things off with the minty Grasshopper Crepes. Or, if Razorback fans are swarming into town for a Saturday game and restaurant lines on Dickson Street are dozens of day-drinkers deep, consider paying homage to a Fayetteville institution, Herman’s Ribhouse (2901 N. College Ave., 479-442-9671). Since 1964, it’s been covering every inch of the joint’s red-and-white checkered tabletops with platters of criminally tender dry-rub ribs, behemoth bone-in ribeye steaks and shrimp remoulade, all accompanied by a dish of saltine crackers for dipping into the signature house salsa.

Nightcap at the Smoke & Barrel

Chances are you won’t saunter into the Smoke & Barrel Tavern (324 W. Dickson St., Ste. 2, 479-521-6880) by accident, given its off-Dickson real estate. With dirt-cheap drink specials, a 2 a.m. closing time and enough whiskey varieties to furnish a tasting session among friends (or to fuel a barrage of bad decisions), the clandestine pool hall is a favorite of employees of Fayetteville’s thriving service industry. Keep your eyes peeled, too, for posters advertising the live music schedule across the street at George’s Majestic Lounge (519 W. Dickson St., 479-527-6618), a longtime platform for compelling performances from local and touring musicians alike and home to an archive of University of Arkansas yearbooks dating back to 1907. 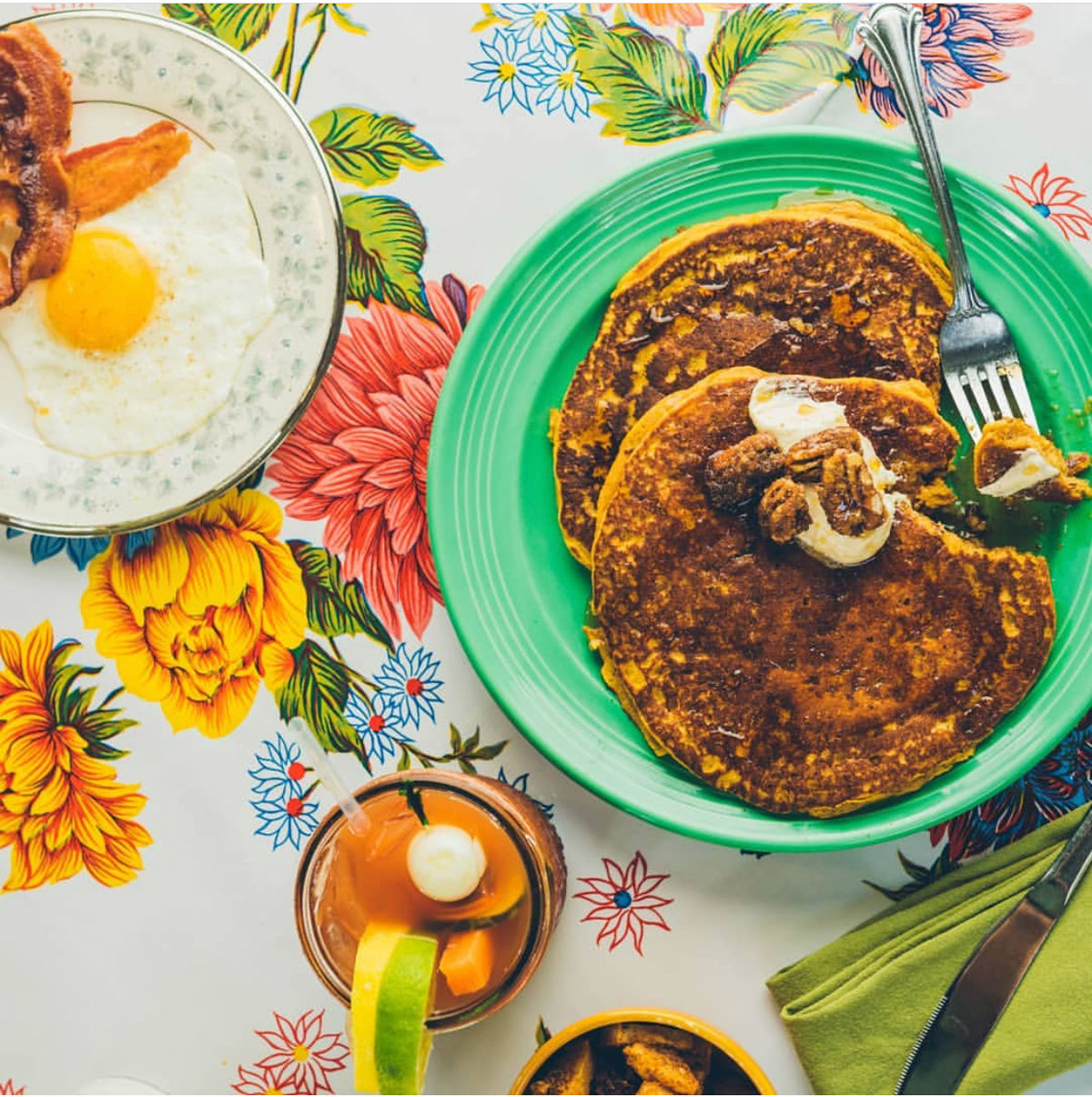 Since it opened in 2014, Fayetteville’s  The Farmer’s Table Cafe (1079 S. School Ave., 479-966-4125) has garnered deserved praise from the likes of Pharrell Williams, The Food Network and lifestyle guru P. Allen Smith. Maybe it’s because its meticulously crafted menu is so inextricably tied to the soil around it, channeling a wave of retail dollars into the pockets of Arkansas farmers. Or maybe it’s because it’s delicious. The three varieties of pancakes — sweet potato, coconut almond or the “War Eagle,” your standard ’cake — are the fluffy stuff of dreams, and the Ozark Huevos are an invitation to wedge the restaurant’s celebrated organic pinto beans with bone broth into the breakfast hour. 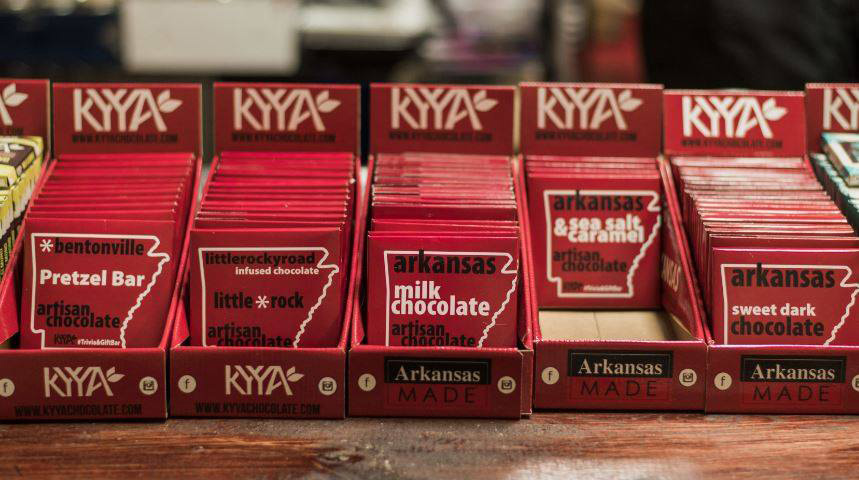 BEAN TO BAR: Kyya Chocolate’s Elm Springs tasting room is a must.

A scenic detour to Elm Springs’ Kyya Chocolate (278 N. Elm St., 844-281-4470) affords you a reprieve from the highway through rolling hills and pastoral farmland, but it’s also a chance to sample bean-to-bar wares like caramel bonbons and Ugandan chocolate bars infused with cinnamon, pretzel bits or Kenyan coffee.

Take to the sky in East Bentonville

In 1929, aviatrix and Bentonville native Louise Thaden broke the women’s record for endurance with a flight lasting 22 hours, 3 minutes and 12 seconds. Ninety years later, there’s Louise Thaden Field (2205 S.W. I St., 479-254-0817), a sleek airfield alongside Lake Bentonville. The site is home to a flight school and a diner, and serves as a hub for the local flying club. Book a 30-minute “Discovery Flight” on a Cessna 150/172, stroll along the lakeside patio, or snap a photo with the candy apple red F2G-1 Super Corsair parked in the hangar lobby.

Once a cult-favorite food truck, Bentonville’s Crepes Paulette (100 S.W. 8th St., 479-250-1110) is now a brick-and-mortar spot near the Bentonville Town Square. Part eatery, part food performance, the creperie-side window lets you watch as the paper-thin crisps are formed on the griddle and then stuffed with things like Black Forest ham and Tillamook sharp cheddar — or, on the sweet side, apple butter, raspberry jam or Reese’s peanut butter chips.

Take the art trail to a world-class art museum

Hit the Art Trail for a 20-minute walk from downtown Bentonville to one of the finest and fiercest museums in the American South, Crystal Bridges Museum of American Art (600 Museum Way, 479-418-5700). The 120-acre museum park boasts free admission to its permanent collection, with works from early American masters to modernists like Jackson Pollock and contemporary artists like Kara Walker, as well as temporary exhibitions designed to challenge and provoke the viewer. That’s to say nothing of the surrounding network of trails, or the museum’s architectural acquisitions — a Usonian Frank Lloyd Wright house and a 50-foot “Fly’s Eye Dome” by renowned inventor R. Buckminster Fuller, for example. In the unlikely event you leave feeling like you’ve  not seen everything there is to see, head over to the Museum of Native American History (202 S.W. O St., 479-273-2456), where you’ll find a 14,000-year span of archives and artifacts.

A 1962 Fleetwood Cadillac limousine covered entirely in coins and giant penguin figurines lead the way into this hybrid hotel, restaurant and art museum in Bentonville. Its restaurant, The Hive (200 N.E. A Street, 479-286-6575), is a two-forks, two-knives sort of eatery, with a modern bee-themed art installation. Dinner is accompanied by thoughtful touches — a house-made cornbread with sorghum butter alongside the meal, a whimsical tuft of cotton candy presented in a vase at the diner’s departure. Or, trade the hive for the holy and order up steak frites with chimichurri at The Preacher’s Son (201 N.W. A Street, 479-445-6065), a stellar upscale American restaurant situated within a former church. You’ll dine in light refracted by stunning glass from artist George Dombek, under a grid of 288 5-inch gold church bells.

Your best bet for Sunday brunch in Bentonville is Tusk & Trotter (110 S.E. A St., 479-268-4494), a corner gastropub in downtown Bentonville that not only sources its ingredients locally, but makes no bones about celebrating the more visceral parts of the butcher’s process, with house-made pork rinds and a gargantuan mural of a pig fragmented into its edible parts. Order the house-made sodas, the Carrot Cake Waffle, or the brasserie’s That’s Belly Bovine, a set of braised pork belly cubes arranged atop a marrow-filled bone, with whipped potatoes, pickled vegetables and a smoked jowl/fig gastrique.

Quaint and quirky it is not, but The Chancellor Hotel (70 N. East Ave., 479-442-5555) is your best bet for maximum privacy and for any fellow travelers who might crave the creature comforts of upscale lodging: iPod docks, flat-screen TVs, a gym. Plus, it’s situated perfectly between the Fayetteville Town Square and Dickson Street, leaving more than an evening’s worth of destinations within walking distance.

You’ll have to duck south of Fayetteville for it, but a stay at the 21+ Flamingo Springs Trailer Resort (15475 Greasy Valley Road, 479-824-1021) is a destination unto itself. Six vintage Airstream trailers, each with a different theme (one’s a pitch-perfect shrine to TV’s “Friends”), are situated around an Astroturf-surrounded swimming pool in the middle of 50 acres of woodland. On your way back into town, pick up the best chocolate croissant in the region at Briar Rose Bakery & Deli (28 East Main St., Farmington, 479-300-6027), a sunny Bavarian-style cottage where the coffee bar features canisters of freshly whipped cream and an entire oven devoted to cinnamon rolls.