Is a consensus in sight on congressional redistricting?

Two Republicans, Rep. Jim Dotson and Sen.Breanne Davis, took a stab at a plan that seems primarily intended to move Pope (along with Cleburne) into the 2nd District and take Saline out. This would leave Pulaski County intact in the 2nd. But Davis told the Democrat-Gazette she may have another plan with a popular Republican feature, carving up Pulaski County, the biggest Democratic vote producer in the state.

Democratic Sen. Clarke Tucker tells me he’s working on a bill to make some small adjustments in a plan defended yesterday by Republican Sen. Bart Hester as the fairest, most geographically sensible plan. It passes out parts of Pulaski to three congressional districts. Tucker says his plan would make changes that would leave every county in the state whole in redistricting, but prevent gerrymandering of Pulaski. What could be wrong with that? 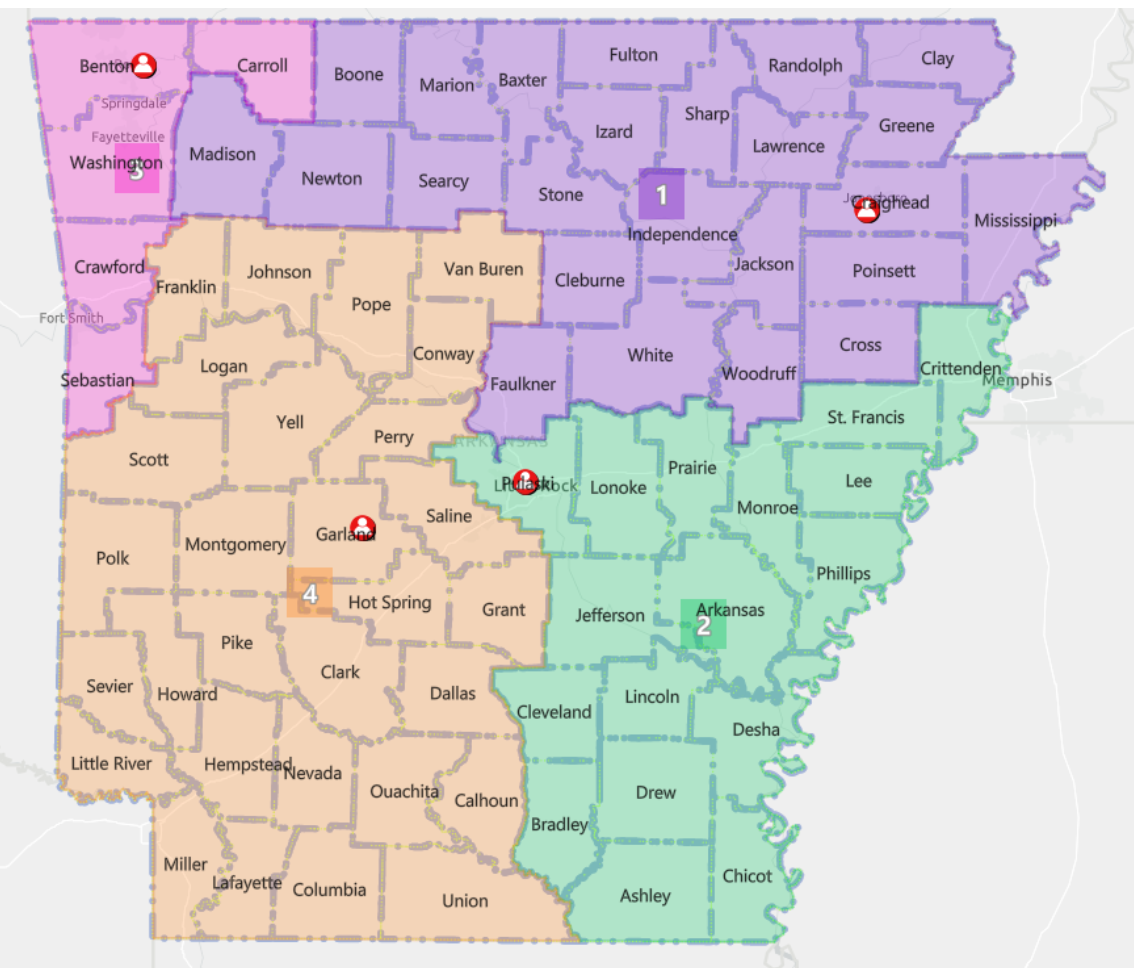 Pretty close to Hester’s plan in shapes, but to keep PUlaski whole, he’d move Garland, Saline, Grant, Dallas and Calhoun into the 4th District and he’d add Crittenden to the 2nd. No county divided. Some geographic sense to the district outlines. Isn’t that what Hester said would be the ideal? He said it couldn’t be done without slicing Pulaski into three districts. It can.

UPDATE: Following is a news release from the Delta Caucus decrying the Hester plan and endorsing Democratic Rep. Reginald Murdock’s plan for a Delta-to-Pulaski District. Short comment: The caucus’ criticism and endorsement of the Murdock plan are precisely why the Republican legislature would prefer one over the other.

Redistricting plans such as Senate Bill 721 by Sen. Bart Hester (R-Cave Springs) are travesties of sound, traditional principles for establishing Congressional districts and should quickly be thrown into the dustbin of history where they belong.

“Bill 721 not only splits Pulaski County into three parts, but moves a large part of the current Second District in Perry, Conway, Van Buren and Faulkner counties out of the Second, while adding a huge area in southeast Arkansas that has traditionally been an integral part of the First or Fourth District,” said Caucus Director Lee Powell said.

The Delta Caucus partners believe that a wise and fair alternative plan has been presented by Rep. Reginald Murdock (D-Marianna), which does not split up Pulaski County and gives an adequate voice and opportunity for minorities as well as other groups to elect a Member of Congress. Rep. Murdock said his plan is “an opportunity for a person of color, or a woman, or a Democrat, or a Republican to be elected in the Second District. ”

Arkansas’ population is about three quarters white and almost a quarter of the population are minorities of various kinds, so it is fair and democratic to have at least one district represented by a member of a minority. The Pulaski County percentage of Blacks at about 36% is much higher than the state-wide average.

The Hester plan and similar plans are clearly designed primarily to have four Republicans elected to all the Congressional districts in Arkansas.

Pulaski County is heavily populated and is more diverse than Arkansas as a whole, with state-wide figures indicating about 70% of the population being white, whereas in Pulaski County only 49.9% of the people are white and 36% describe themselves as African American alone. “This is a clear effort to dilute minority voting power by breaking up the heavily populated, diverse jurisdiction of Pulaski County,” Powell said.

“There has always been one Congressional district that is predominantly a Delta district, with characteristics like being more agricultural and rural, and being fairly diverse, but this plan would chop up the Delta into three districts and thus dilute our voting power,” said Harvey Joe Sanner, Delta Caucus senior adviser and president of the American Agriculture Movement of Arkansas.

This plan is similarly inappropriate in moving largely agricultural, small-town counties in southeast Arkansas out of the First District where they have been for many years. Where possible, sound redistricting principles require that generally similar areas be placed together.

Powell recalls that he was among those who testified to the legislature after the 2010 Census, and “far from gamesmanship, the lines were then drawn on traditional principles of not diluting minority voters, placing similar demographic areas together where possible, and avoiding making wholesale gerrymander changes to the districting map.”

The Delta Caucus defines the “Greater Delta Region” as including Little Rock–especially the diverse and lower-income neighborhoods in the city–and extending eastward to the Mississippi River.