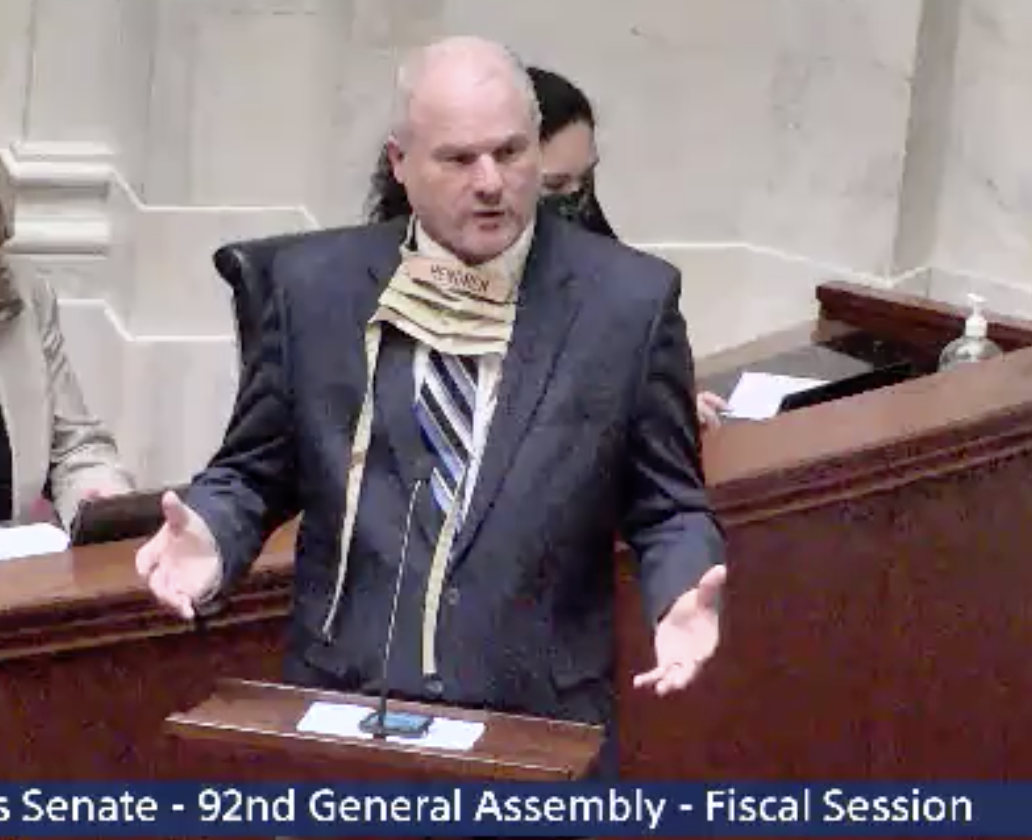 INTRODUCED TAX INCREASE BILL: Sen. Jim Hendren said he wasn’t for it, but substituted for the absent sponsor. It failed.

The Senate took up two resolutions today that would expand legislative work beyond strictly budget bills.

One, sponsored by Sen. Linda Chesterfield, would delay an income tax cut scheduled to take effect this year until 2022 on account for the decline in state revenue and the huge jump in employment claims. Says the resolution:

“It is necessary to enhance the state’s ability to maintain essential functions and service for the citizens of this state throughout the ongoing public health emergency.”

Sen. President Jim Hendren carried the resolution on the floor because she couldn’t be present. He said he didn’t support it, but thought she deserved to be heard. Specifically, it would delay a planned two-step reduction for the top bracket of taxpayers, making more than $79,301. It would delay until 2022 a drop in the top bracket from 6.9 percent today to 6.6 percent that had been scheduled this year and delay until 2023 a drop to 5.9 percent that had been scheduled in 2021.

Sen. Joyce Elliott supported the resolution. She said it wasn’t fair to continue with a tax break for the wealthiest taxpayers at a time when so many sacrifices are being made. There was no other debate

Another, by Sen. Bob Ballinger, would codify in law that it is a crime punishable by fine and jail to perform an elective medical procedure except in extreme situations. This is effectively what Gov. Asa Hutchinson has already covered in an executive order.  The resolution, needing a two-thirds vote, says procedure must be posted if “not immediately medically necessary to correct a serious medical condition of, or to preserve the life of, a patient who without immediate performance of the surgery or medical procedure would be at risk for serious adverse medical consequences or death, as determined by the patient’s physician.”

The resolution exempts “any surgery or medical 26 procedure that would not deplete the hospital capacity or the personal 27 protective equipment needed to cope with public health emergency related to 28 the coronavirus disease 2019.”

What’s it about? I suspect abortion because Ballinger and the House sponsor with a mirror-image resolution are anti-abortion. As it stands, the two remaining abortion providers continue to operate, with restrictions in the Hutchinson order. Ballinger’s resolution says there’s been confusion about the order.

I think pregnancy is a serious medical condition that the U.S. Supreme Court, until now, has said is an absolute right for a woman for any reason up until fetus viability. I am sure that prescribing two pills for an early-pregnancy miscarriage puts no demand on protective gear or hospital resources. Maybe Ballinger is just seeking a little clarity. I don’t think so. I think he’s looking for a legal tool to shut down Planned Parenthood and Little Rock Family Planning Services for the duration.

Ballinger said the measure was still being worked on and he didn’t bring it up for discussion today.

Hutchinson was asked again about issuing a ban on abortion and whether that was meant in his order barring non-essential medical procedures. He said his order was almost identical to the order issued in Texas, The attorney general there has interpreted it as banning all but life-saving abortions and a federal appeals court has upheld that interpretation, though a district court in Texas and other states have ruled differently.

The governor noted, however, that the state had also tried to discourage out-of-state travelers who might seek abortions in Arkansas. He said it was a “great concern” if anyone was coming from another state for a medical procedure, abortion, or, he was careful to add, any other procedure. That travel violates safety procedures and is a concern.

He said the Health Department was investigating whether that was occurring. But asked directly if he would say his order banned all but abortions to protect life or health of a woman, the governor said he wasn’t going to elaborate on what he’d already said. This follows similar states by him and Smith earlier this week. The two remaining abortion providers in the state, one only providing pharmaceutical abortions, remain open.